When Opening Day starter and former third overall pick Mike Zunino was demoted to Triple-A Tacoma on May 5, a nation wondered aloud: Mike Zunino had an option left?

After a hurried minor-league prologue and a full 2014 season, the catcher has had opportunities each year to tour Tacoma’s beautiful Museum of Glass, the latest demotion coming off of a .167/.250/.236 start with the Mariners. It’s a disappointing regression for a player who looked as though he were kind of, sort of, maybe just barely figuring it out in 2016.

In an interview with local sports radio station KIRO 710 AM, M’s general manager Jerry Dipoto admitted that Zunino’s poor start had begun to affect his defense; his FRAA/162 games dropped from 8.4 in 2015-2016 to -4.7 in 2017. Despite a reserve of 38-year-old Carlos Ruiz and the ageless Tuffy Gosewisch, Dipoto felt like he had to send Zunino down to revive his confidence.

"This is very different than what we did last year [when Zunino was held down the entire first half]. Last year we sent him back in the attempt to rebuild an approach, and I think by and large that was generally successful and even this year he’s maintained his walk rate. But along the way he’s had a lot of difficulty making contact. He’s not really chasing pitches, he’s just having a difficult time making contact in the strike zone, and to me the only way you can get beyond that is to just go have success.”

It certainly feels that way watching Zunino, a frustrating hitter at the best of times. Thanks to his relative youth, his pedigree, and the occasional upper-deck homer, it’s easy for fans to grow disappointed by his everyday toils, especially at a position that hasn’t seen consistency in Seattle since the early Kenji Johjima era. But the simple truth is that while Zunino’s peak may be Dave Valle with strikeouts and defense, that’s actually a rather valuable thing indeed. It’s how last year, sporting only a .207 batting average, Zunino was worth 1.6 WARP in a third of a season.

It doesn’t sound like someone commuting back and forth on Interstate 5 every season. So is Dipoto right? Have the lessons of 2016 evaporated?

In terms of pure plate discipline, Zunino’s start to 2017 doesn’t appear to be any worse than last season, and in terms of contact, it’s markedly improved; the latter is his highest rate since his rookie season. Note that these numbers aren’t good, particularly, but given his other skills, they’re enough to get it done.

Despite the improvements, his walk rate has decreased (10.9 percent to 7.5 percent) and his strikeout rate has increased (33.9 percent to 37.5 percent) this season, not the kind of trends anyone would confuse with improved strike zone control. But there’s a good reason for this:

The New Zunino has stopped chasing as many pitches out of the strike zone, and pitchers have taken note. He’s walking less because he has fewer balls to take, and he’s striking out more because … well, because he’s still Mike Zunino.

That would lead us to the image of a batter overmatched by pitches in the zone, which is bad news. If he’s not making his usual sporadic good contact, and instead fouling off hittable pitches, there’s not really any good advice to give him except “stop doing that." So is Zunino hitting too many fouls?

Well, that doesn’t seem too bad. Except … wait. Computer, enhance.

That seems more like it. Except that right below him on that last leaderboard, at 4.01 percent, is Joey Votto. So fouling off center-cut pitches isn’t something you’re going to coach kids to do, but it’s also not the end of the world for a hitter.

And it’s not as though Zunino has been pressing for that first home run of 2017. If anything, the limited contact he’s made this season has been on a flatter plane than in the past, with only a handful of balls in play above the dreaded 35-degree mark: 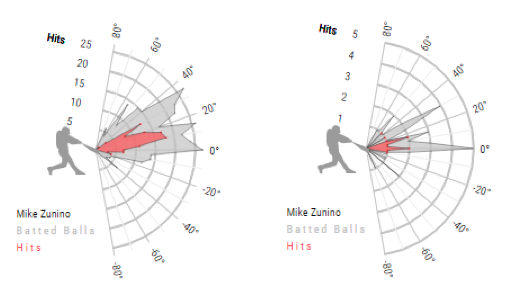 Statcast, using exit velocity and launch angle, creates an expected batting average and wOBA on balls in play. Zunino’s wOBA on balls in play thus far is .299; by their estimate, it should look more like .370, which would put him around the middle of the pack. It’s a very rough estimate, and obviously made rougher by the small sample size, but that same sample means that only a few nice catches can ruin a slash line. And while it’s true that good defense doesn’t matter when you clear the fence—something Zunino hasn’t accomplished this year—the way he’s hit would lead one to believe that his approach at the plate isn’t any more flawed than usual.

Be that as it may, if the results of Zunino’s batting have somehow caused him to press, or distract him on defense, that’s more than enough cause for a minor-league appertif on its own. But do slumping hitters really get worse on defense? I looked at a list of every catcher season since 1988 with 300-plus plate appearances at age 29 or younger, and compared their True Average and FRAA to their career values. Zunino’s 2017, if he qualified, would rank 36th-lowest out of 719.

If there’s a correlation here (there probably isn’t), it’s that bad young catchers are slightly better on defense than overall in their career, because they’re young. Macfarlane’s 1989 season came near the beginning of his career, and his framing skills leapt up to their career-average norms the following season. The better, although not perfect, comparison is the recent lost season of Indians catcher Yan Gomes, who like Zunino started off as an excellent framer and decent hitter before falling to earth. Unlike the Mariner, however, Gomes had his season aborted by injury, not demotion. So far, Gomes has reverted to pre-disaster (although post-fantastic) status; perhaps the time off did do him good, even if it wasn’t planned.

If the change of scenery was meant to clear Zunino’s head, it’s worked in the short-term: he hit home runs in his first two games at Triple-A. And Dipoto was clear that this wasn’t a repeat of the 2016 experiment; Zunino was there to reset, not restart. Still, given the state of the Mariners in both the short and the long term, the demotion of Zunino is a gamble. Sitting below .500 with a rotation stocked with TBAs, the M’s have consumed what little wiggle room they had.

They need everything to break their way, and that includes getting the Zunino of August 2016 to help power those 10-8 victories. The good news: not only are the ingredients of that player still visible, but the reputation of his newfound plate discipline, and the ugliness of his April statline, might lead opposing pitchers to give him more strikes to pull. Maybe. Regardless, Ruiz and Gosewisch have no ceiling, and may not have any floor. Betting on Mike Zunino may not seem palatable, but given the size of their stack, they may not have a choice.