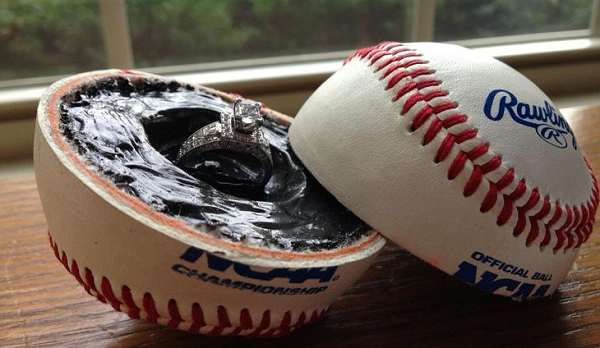 Sunday night he proposed to her. The bitter New England wind nipped at them on the upper reaches of the Budweiser Right Field Roof Deck. He was young, from Wellesley, BU-educated. She was from Atlanta by way of suburban D.C. They met at school, mid-level econ half-full most days, had been together five years. They passed summer days on the Charles biking or walking, winter days scouring Star Market for ingredients to their ritual suppers. They vacationed in Vermont, the bed and breakfasts, the hiking, the small fudge shops.

If there were to be friction, it would be on the baseball front. She loved the Red Sox. She adopted the team after being raised on Georgia football, attended games with her college friends on weeknights. Many times had she and her boyfriend traveled the Green Line the few stops from Allston to Fenway. He tagged along, mostly. Baseball wasn’t his passion as it was hers, but they went in tandem and with friends. The crowds awed him. People to watch.

She loathed the ballpark proposal, and he knew that but went ahead with it anyway. The ten-dollar Harpoon IPAs they had imbibed failed to loosen the cold’s grip. The cameraman trained his lens on the couple, the Jumbotron relayed the image to the forty thousand Red Sox and Cubs fans gathered in their ritual. They had argued as he failed to conceal the surprise. He reached for her left arm with his right. She recoiled. He bent to a knee. She said no. The cameraman lowered his camera.

Forty thousand chanted. Forty thousand jeered. They didn’t hug. The round high-top table stood a few yards away, home of their twin aluminum cans full of beer. His black trousers bulged with the ring he had stuffed the ring into his pocket that afternoon. The beer-emblazoned bow tie loomed behind them as they argued, now offscreen.

She swung into the garage. Another car whipped around the corner, shining its brights directly into the rearview and into her eyes. She exited the car, jostled her keys, opened the garage door, the one that leads to the house, not the one that leads to the driveway. One stop at the kitchen cabinet for a whiskey. She climbed the stairs, brushed her teeth, washed her face. Her cell phone rang.

On Aaron Judge and Optimism

A post shared by New York Yankees (@yankees) on

Whatever I’m doing, it’s not working. I need to try something new — something fresh — but change and the thought of change and the possibility of change harangue me enough to where inaction seems like the least worst option. It’s not laziness, it’s not fear. Or maybe it’s both and exclusively both. It’s hard to tell when it’s hard to care.

It feels like winter is coming again. The smell of spring is kissing cousins with the fall air and it’s easy to confuse the two when the eyes are closed. It seems odd to be concerned about spending another season indoors and on the sofa when that’s exactly what you’ve been doing this whole time — but the concern is there just the same.

Baseball still helps, but perhaps not as much. Opening Day is wonderful and should be celebrated, but it is the Pied Piper for everything else to come. Baseball, like everything else, has become a vehicle for insensitivity and self-aggrandizing and a general disregard for civility or basic human feelings. The poison ship was sailing long before we boarded, but we boarded just the same.

But Aaron Judge makes me happy. There’s no specific reason behind it, really, which is the odd part. When I hitched my wagon to a player in the past, there was a backstory or a perceived untapped potential that could be referenced in conversation. But Aaron Judge, though he certainly has the potential to improve, isn’t some AAAA outfielder or a converted shortstop who now pitches. He’s an airliner painted up to look like a human so that he can play baseball. He’s a statue cursed with everlasting life until he hits 6,000 home runs and can return to his realm. He’s a comic book hero that was rejected because he seemed too conveniently powerful.

When 90% of reactions you have to any question or statement are deep sighs, when your dumb broken brain is still making you question nearly everything, when all your friends and sedatives mean well but make it worse, you don’t always need a success story or a grand metaphor to sink into. Sometimes you just want to watch a giant hunk of man-steak beat the everloving crud out of a ball with a stick. There is beauty in violence and violence in beauty and when I figure out which applies to Aaron Judge, I’ll let you know. Until then, curl up on the couch, put on some highlights, and hope more answers come in the morning.

A Life in Pieces

Recently I completed Bryan Cranston’s autobiography, A Life in Parts. Because the man is so efficiently and consistently nice, the strongest parts centered not on him but on the more destructive folks around him: a jilted ex-lover, an alcoholic mother, and a pathetic, stargazing father. But the part that stuck with me was a nearly incidental anecdote, six pages long, tacked near the end of the book.

Recruited by his father to check on his elderly aunt and uncle, who were close enough to attend gatherings but also distant enough to disappear on month-long road trips without notice, they suspect, and have confirmed, tragedy. While the autopsy is performed, Cranston is charged with wading through the house, untouched except the two squares of carpet cut from the floor, to look for explanations.

The imagery is alarming. Not just the smell – “a cocktail of decay” – but the state. A house full of neatly-ordered waste: newspapers stacked and bound in twine, boxes labeled “Keys to Old Cars” and “Two Bras Too Small.” A freezer stocked with identical microwave dinners, the oven used as storage spaces for QVC items and empty plastic bottles, wrapped and saved. An electric clock, blinking, for who knows how long. Worn, soiled recliners, surrounded by empty champagne bottles, facing a television stacked on top of its two broken predecessors, a half-done crossword in one seat.

I am not familiar with hoarding as a disorder; my garage space waxes and wanes, though my boxes of yellowed sports pages and SI magazines don’t infringe upon our sense of freedom. The seed in center of the madness of Aunt Sunday and Uncle Eddie is a slow desperation in the need to create something out of the flotsam that floated through their lives. That compulsion eventually overtook their other senses, clouded everything until it was all that left, a single drive that destroyed everything else.

Even stripped of the object of the compulsion itself, the physical property being hoarded, that seed of insanity stirs disquiet in me. Is baseball this, for me? Am I consuming these random images on the television, the words that scroll down tweetdeck, and creating a tower out of my own meaninglessness? It’s shared meaning, the existentialist within me is trained to respond. It’s meaningful because we collectively decide to make it meaningful. But Sunday and Eddie shared their delusions, too. We’ll never know if the illusion was perfect, whether they were happy before they stopped. I hope they were.

We’re all doomed to leave behind mysteries in the way we die, narrative arcs we devoted ourselves towards that the survivors will never understand. This is the theory of the economic waste of gift-giving, applied to life itself: so little translates from one life to another, so much is wasted. Baseball is no different: your cares, your memories of Didi Gregorius will be, in thirty years’ time, no more valuable than mine of Spike Owen.

It ultimately depends, I suppose, on your stance on what the purpose of life is at all, if baseball and other entertainment is a restorative on the path toward the real task, or whether the game and the happiness it supplies is itself the real task. There’s no concrete lesson to take from Sunday and Eddie because we don’t know Sunday and Eddie. The only course of action, I guess, is to share that meaning, no matter how pointless, as early and often as you can, before you go.