Staring around the traincar, the renowned detective Hercule Poirot sighed, removed his pince-nez, rubbed his nose, and returned them to their proper place. Everything, the detective mused to himself in his native French, in its place.

“Alors, my friends, and so Hercule Poirot has called you all here together, and for what? Mon amis, it is nothing else than to right a wrong!” Poirot stopped, smiling suddenly and pivoting to his left. “But that is for later, non? For now, Monsieur Peralta, we will begin with you, yes?”

“Now what exactly are you driving at, Poirot?” Peralta began. “I was at bat when AJ was called out on that runner’s interference. I can hardly see how I could be responsible for that.”

Poirot smiled and nodded, “Indeed mon ami, it is true that you had nothing to do with Monsieur Pollock’s circumstance on the basepaths, this is true. But why, Poirot wonders, did you hit into a grounder in the first place? Perhaps you were trying to perform the, ah… hit-and-run, as you say, but Poirot he does not think so. Poirot thinks that a talented hitter like you Monsieur Peralta, you perhaps could have hit a line-drive or laid down a bunt.”

“Well-” Peralta began, before being shushed quickly by Poirot.

“Non! It is Poirot’s time to finally uncover the situation most dire in this baseball game. And so we turn to you, eh, Monsieur LeMahieu?”

D.J. LeMahieu looked up and grimaced. “Here we go, the copper is going to try to pin it on the second baseman doing his job. Fine, let’s hear it. I won’t admit to anything.”

“Ah, no you would not, monsieur,” Poirot snapped, “and this is why you were asked to perform the bait and switch of the moment, to fool Poirot! And, heh, it is true that it worked for a moment, that Poirot — stupid, imbecile! — let your collision course with Monsieur Pollock fool him. But it was the moment I watched the review, and the pffah, ‘acting’ with which you and Monsieur Pollock engaged that I knew the truth.”

AJ Pollock looked up with a smile. “And what would I have to do with this, Poirot? Unless you think I wanted to be out of a close game instead of a runner on second.”

Wheeling on him, Poirot raged. “That is precissement what Hercule Poirot means to suggest, mon ami! For who was exactly in the path of Monsieur LeMahieu? Who was running directly on contact with Monsieur Peralta’s oh-so-convenient ground ball? And who made a quick, nearly imperceptible stutter step as if he meant to avoid contact? It was you, monsieur, and it has been you all along!”

Pollock smiled, slightly straightening and force a laugh. “That’s a fun theory, Poirot, but how do you plan to prove it? I mean, I can’t imagine any of my friends here would agree with your thoughts. And I don’t know what possible motive I could have to get myself out.”

“Motive?! You ask Poirot for motive?” Poirot turned away from Pollock and addressed the room. “The motive of all of you was the cruelest and darkest motive of all, the murder of a baseball game. A ten inning affair, scoreless, plodding in the dog days of April. Who would miss such a game, eh? Who would even notice? No one, exactement! No one, save Hercule Poirot.

“And so you all conspire to kill a baseball game in its moment of truest life. But proof? Poirot admits he has none. And oui, oui! You have used Poirot as a pawn most willing in this game of deceit! But, no longer. Poirot’s revenge shall simply be his resignation from this…this…monstrosity!”

And at this, the famous detective replaced his distinctive chapeau with a Los Angeles Dodgers hat, turned on his heel, and left the traincar into the April evening.

On Saturday afternoon, I took in the final day of regular season baseball at the small, Division III liberal arts college where I teach. The night before, the team had qualified for the conference playoffs in a season full of rain-induced rescheduling and a mid-March blizzard that dropped nearly three feet of snow, cancelling classes and sending the softball and baseball teams to work with shovels before anyone could think of taking grounders. But on the last Saturday of April, with temperatures in the mid-eighties and sunlight pressing through the haze of overnight thunderstorms and morning showers, they got both games in.

It was Senior Day, and the stands were heavy with parents and families come two or three hours to watch their students, who will drive home the week after next, cars flush with unlaundered clothes and gaming systems after juggling playoffs with final exams. But on Saturday, who could think that far ahead, surrounded as we were by the still-electric green of mid-spring, broken with pear blossom white and redbud blush?

New growth forest follows the length of right field, only the fence containing the diamond and a stripe of sidewalk separating the groomed from the wild, and batters sheared ball after ball into the brushy press, where they would lie until someone fetched them. In game one, the home team went up 4-0 while the height of one season pressed in on the end of another.

Here with one month of the major league schedule spent, a handful of teams find themselves in the weeds, and for the Blue Jays and the Giants, the margin between good and bad has often been so very slim. As of Sunday morning, seven of both teams’ losses were by a one-run margin, the cruel almosts of bullpen hiccups, stunted comebacks, and a good pitching performance eclipsed by one just that much better. 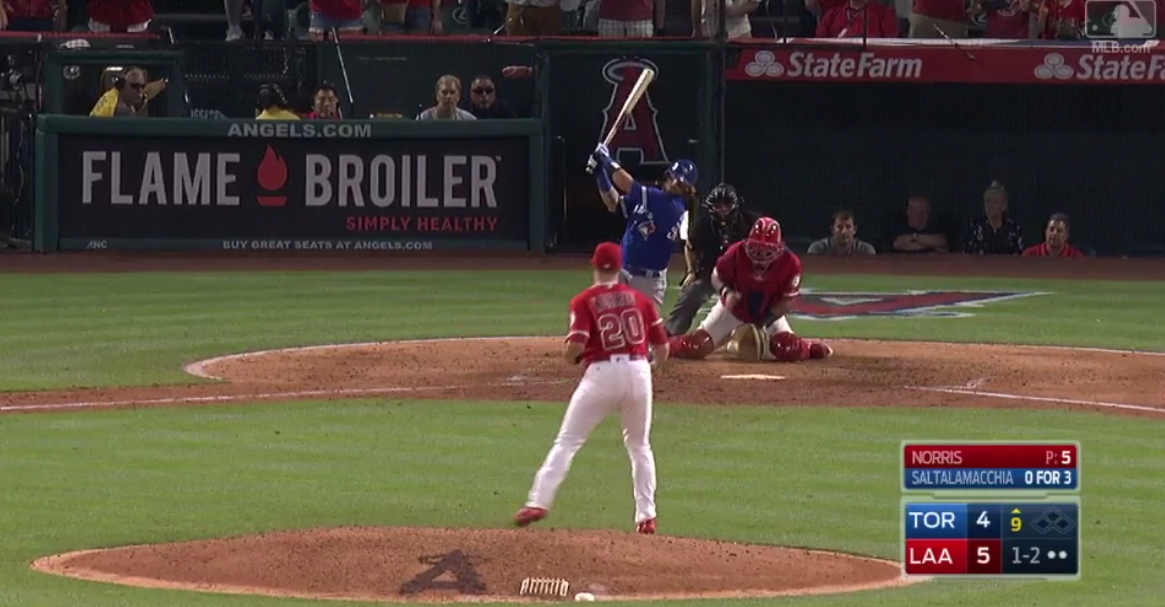 In Colorado, we were reminded of the fickle boundary between winter and spring, too. As one might also say of April snow in the Rockies, all of these circumstances are common. We record them as fixed points—win, loss, above freezing and below—but nature and the nature of the game are full of liminal spaces to which we assign an either/or: after March 21, after x number of outs, y number of innings, according to the rules we’ve designed. Though fourteen specific fixed points constitute the difference between the division basement and fighting for first, the same fixed points require fresh starts, and for this, we should be thankful.

Back in the much smaller world of small college baseball, a freshman had to wade into the trees, the multiflora rose and honeysuckle, to emerge with the fouled-off balls several times over the course of the afternoon. He had no overt part in what became two one-run losses, but the baseballs were retrieved and returned to play, as the whole team will be later this week.

You need to be logged in to comment. Login or Subscribe
oldbopper
The real moment in the D-Backs-Rockies game was the deciding play and what happened there. After Drury's infield hit, Descalso is coming to the plate, that's right, Daniel Descalso who entered the game with a Colon like .128 BA. The list of managers who would have called for a sacrifice bunt in this situation is long, very, very long. Collins would have bunted there with anybody but Cespedes, but Torey Lovullo, weaned in the Bill James School with the Boston Red Sox, actually manages with the Modern Book, not the moth-eaten thing that Collins still uses, and knew that a wasted out is a wasted out. He turned Descalso loose and was rewarded for his astute understanding of the proper call with a W.
Reply to oldbopper