After two seasons of slipping velocity, miscellaneous injury struggles, and other various signs of the aging process, Felix Hernandez is no longer the ace that was once crowned king. He’s still, for the most part, recognizably himself—just less consistently and often less effectively and simply less so. But decline in and of itself is neither interesting nor surprising; it’s the how and the when that provide that color. For Felix, this year seems potentially key to answering both. Were last season’s career-worst numbers truly the beginning of the end, or just an anomalous spike on a gentle downward slope? His first four starts of the season didn’t do so much to provide context there, but his fifth was a discouraging nod toward the former.

Hernandez started off with the luxury of some run support against the Tigers. It didn’t last long. After a rough-but-not-disastrous first inning—one run off a walk and two doubles—he began to unravel in the second. After allowing three runs on three singles, one walk, one home run, and a fatal wild pitch, his night was done. It was just the third time in his career that he’d been pulled before the third inning, and while his final stat line was indicative more of a garden-variety rocky outing than a full-on meltdown, it was clear to see that he was all over the place. 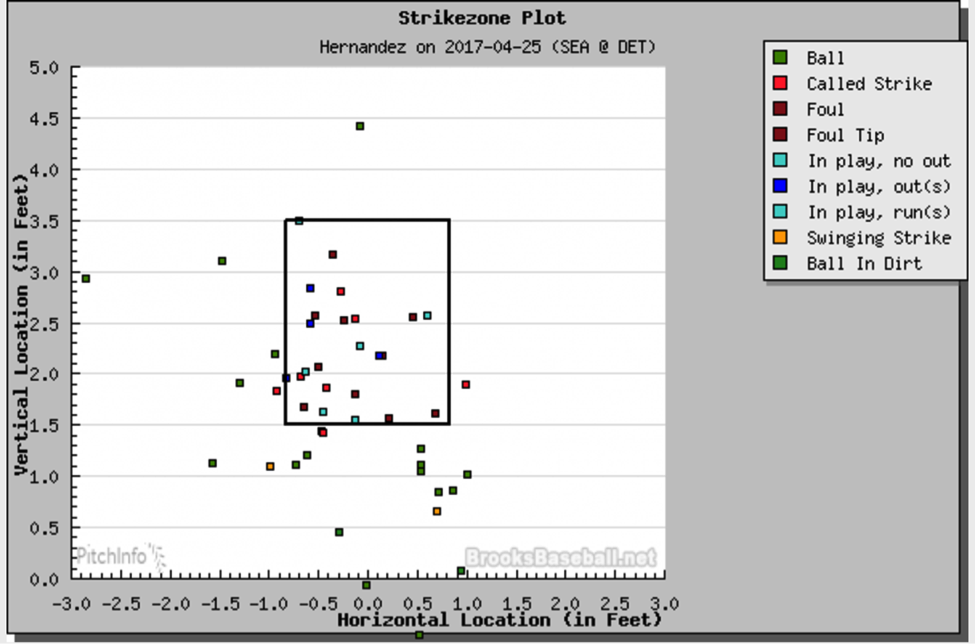 After the game, perhaps unsurprisingly, the team announced that Hernandez was dealing with a dead arm issue and would be flying back to Seattle to see a specialist. Removing your ace before the start of the third inning with a mysterious shoulder issue—not great! But it got worse for the Mariners. So much worse.

The final result was a 19-9 loss, with every member of the Tigers’ starting lineup recording at least one hit and scoring at least once. Particular standouts included Tyler Collins, going 3-for-5 and knocking in three, and Ian Kinsler, going 4-for-5 and knocking in two—and a somewhat remarkable resilience in making it all the way through to the bitter end for the poor Mariners.

Trea Turner picked a nice setting for his first triple of the season—a bases-clearing one an inning after his first home run of the season and several innings after a single and a double, allowing him to record the first cycle in nine years for the Nationals. He ended up driving in seven in a 15-12 win over the Rockies.

Chris Coghlan easily gave us the most intriguing play to feature Yadier Molina in at least three weeks and certainly the most acrobatic one. With the game tied in the seventh inning, Coghlan took off from first on a deep fly ball to right field. And rather than collide with Molina at the plate, he just leaped right over him and tumbled down to touch home plate—safe, imaginative, and decidedly stylish. The Blue Jays went on to win, 6-5, in 11 innings.

The Royals—saved the disgrace of last place in the American League only by the Blue Jays’ frustrating start to the season—scored more than three runs last night for the first time in nearly two weeks. Alas, it wasn’t enough. The White Sox hit starter Danny Duffy hard, scoring six runs in the first five innings, and the Royals’ late surge with a pair of ninth-inning home runs just wasn’t enough to make up the difference. The White Sox won, 10-5.

We will pull together and come out of this. Reason for concern, but i dare somebody to count us out.

That’s now 11 home runs when no other player has recorded more than seven, a new franchise record for homers hit by a Brewer in the month of April, and no signs of slowing down yet.

With Cleveland down 3-1 in the fifth inning yesterday, Jason Kipnis thought he’d knocked one out of the park—but Josh Reddick had other plans. 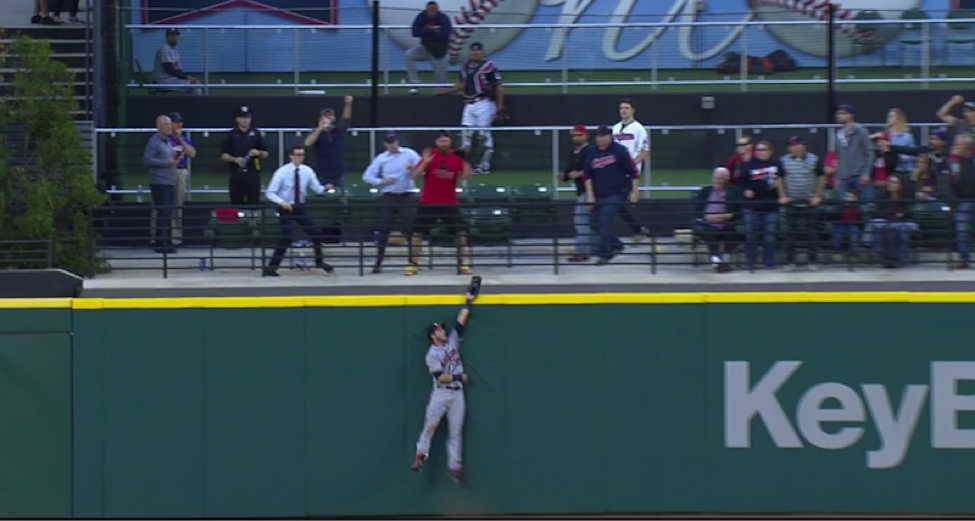 So close, buddy. So close. 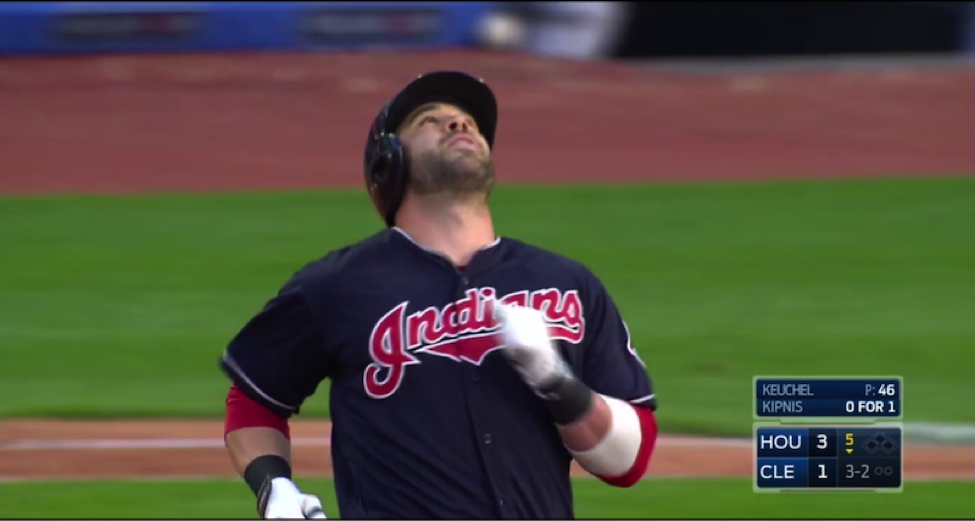 Close enough to awe Dallas Keuchel, who went on to provide a somewhat awesome performance of his own with a complete game in the Astros’ 4-2 victory. 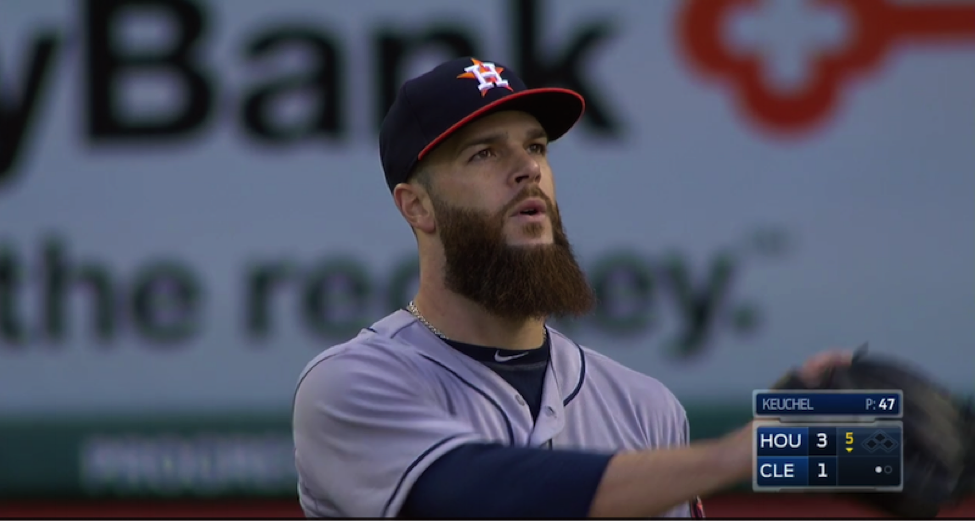 What to Watch for Wednesday

James Paxton will look to continue his hot start to the season, facing off against Daniel Norris and the Tigers at 7:10 ET. In his first four starts, he’s been striking out more than 30 percent of batters, and he has yet to allow a home run. The improvements he showed in last year’s second half seem to have stuck around—including a velo bump—and the results have been solid.

Carlos Martinez is currently in the top tier of the starting leaderboard for strikeouts-per-nine, with 12.3. Unfortunately for him, he’s also toward the top for walks-per-nine, with 4.4, and the Cardinals have lost three of his four starts. He’ll try to record his first win of the season against Mat Latos and the Blue Jays at 8:15 ET.

You need to be logged in to comment. Login or Subscribe
kraigy1973
Here's something "you need to know"...since 8/30/15, covering a healthy span of 42 starts and 266ip, Ervin Santana sports a 2.70 ERA. Since June 19th of last year, covering 23 starts and 151ip, his ERA is an even better 2.02. I don't think he's getting enough (any?) attention for this extended run of greatness. Who has been more dominant over this same stretch?
Reply to kraigy1973