The Curious Case of Joe Nuxhall 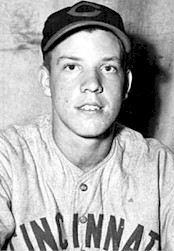 For reasons that no one could ascertain, and certainly no one wished to speak of, Joe Nuxhall was born in Hamilton, Ohio on July 30, 1928 not in the traditional way, as a baby, but rather as a miniature old man. The birth was performed at home, and the result was so upsetting that the doctors and nurses swore never to acknowledge it, for fear of their own reputations, while the Nuxhalls themselves, too terrified and dismayed to reveal his condition publicly, kept the stooped and withered son in his room, with only a radio for comfort.

Nuxhall was allowed to wander, once his legs supported him, and so he found himself at the ballpark. There he was at home, surrounded by other senescent men, peering toward the field through wireframe glasses, while before them a boy’s game presented itself. Nuxhall immediately flung himself into baseball, spent his waking hours watching it, reading about it, poring over his scorecards in the twilight. He memorized its language, learned its habits, sang along with the cadence of the broadcast as his Reds played, familiar and unchanging, like a real family.

One day a man noticed him at the park early, basking in the August sun. “I’ve seen you. Are you here every day?” the man called.

“Unless they’re out of town,” he answered. “Or it rains.”

“You must know a lot about baseball,” the man said.

“My partner is ill,” the man said. “How would you like to try calling a game?”

He did, and he was good at it. They invited him back, and soon he was the regular broadcaster. The work filled him with vigor, the sunlight bronzed his skin and faded his wrinkles. With every year he grew stronger, until he grew to envy the players, throwing against a wall in secret. He understood long before what was happening to him, so one day he quit the broadcast, and disappeared for a few months. Then, under the guise of being his own unmentioned son, he tried out for and made the team.

Nuxhall pitched out of the bullpen, his fastball weaker than that of his teammates, but he didn’t worry. The veterans always complained that if they knew what they knew when they were young, they would have been great. Nuxhall did, and so he became great. He pitched for years, grew to be beloved by the people of Cincinnati all over again.

Then, even as he felt stronger and more athletic than ever, he couldn’t seem to throw strikes, or get a feel for the ball. His curve left him, then his fastball. The Reds sent him to the minor leagues, but not only did it fail to improve, he grew smaller, weaker. Each year he sank another level, scuffled more, but he refused to give in. Baseball was everything to him. It was all he was.

He almost gave up when, in 1991, war broke out. They were fighting some massive conflict in the Middle East, complete with a draft, and many of the ballplayers went. Nuxhall was too young to join, of course; his body was only fifteen. And then one day, the Reds called. How would you like to pitch one more game, they asked. Baseball still needed him to cheer up the folks at home.

It was the break he was waiting for, a final chance to show the world his life’s work. “I’d like that,” he said.

November 28th, 2014: Billy Beane had had enough. “My **** doesn’t work in the playoffs, huh?” he yelled at a nearby vending machine. He had studied the reports from Fremulon Industries, a Silicon Valley-based biotechnology lab. He knew it was possible. He still kept the prototype in his office, behind the popcorn machine.

Beane opened the drawer at his desk, lifted the false bottom from it, and stared at the switch. He flipped it, and the soft, gentle hissing of cryogenically frozen air painted the room . The prototype rose up from the floor smoothly, silently.

Beane lost himself in thought.

February 28th, 2016: “We think we have a good club”, intoned Manager Bob Melvin. “We may not have a lot of household names, a lot of people folks may not have heard of…”

Melvin’s voice trailed off for a moment, his eyes glassy. To the careful observer, to someone not at just another mindless Q&A in early Spring Training, the pause would have been noticeable. But everyone, even Melvin himself, is still lost in routine.

“…may not have heard of a guy like Mark Canha. But he’s here, and we believe in him. We’re excited to compete.”

Oakland went crazy. It was the beginning of the end.

October 29th, 2026: The A’s win their fifth consecutive championship. 1B Jeaux Hecker hits 90 HR. Ratings and attendance are down across the league. Commissioner Manfred announces an official investigation into rumors that Oakland is has gained an organizational advantage through illegal means. The A’s front office denies all wrongdoing.

Beane’s admission came, he said, “for the good of the game.” Oakland’s utter dominance had resulted in a collapse of viewership and revenue across the game, gutting team’s negotiation attempts as their once-lucrative television rights came up for renewal.

In a joint statement from Beane and commissioner Derek Jeter baseball announced that the A’s would recall the replicants, and their production facility in the bowels of O.Co would be destroyed. The shutdown code was given.

It had no effect.

(Although badly corrupted the final statement from the desk of President Russell Wilson has been partially salvaged through extensive data-recovery efforts. It reads as follows)

July 25th, 2039: Never before have the words on our nation’s currency, “Non Tempus Dormire” held greater relevance…..only through constant vigilance can we throw back the cost-controlled enemy that would destroy our future….I am thus authorizing double rations of Recovery Water to our nation’s Army, brought to you by Nike… No bad days–

(the rest is unintelligible.)