The left fielder has become an endangered species. That's an odd statement to make, but the data say it’s true, and the reasons why tell us some interesting things about where the game of baseball is going. And it starts in this graph right here: 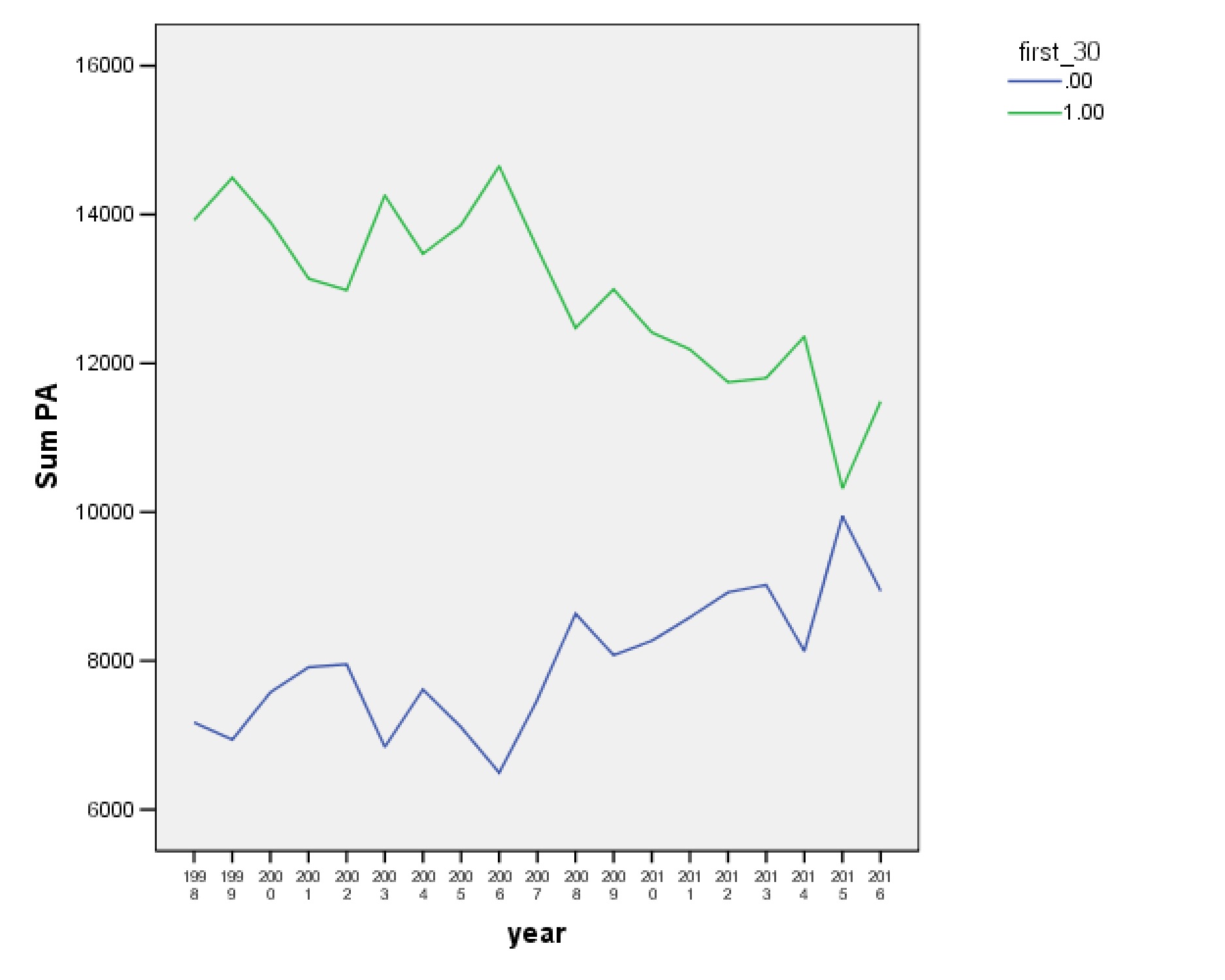 This is a graph from 1998 to 2016. I took the 30 players who recorded the most plate appearances as left fielders during each year. These would be the “starting” left fielders, and they are the top line on that graph. The bottom line is a everyone else who appeared as a left fielder. The lines represent the raw number of plate appearances that each group made in their capacity as left fielders. Guys who usually played in left, but who were moonlighting at first that day, didn’t count.

As some point of comparison, here’s the same chart for center fielders: 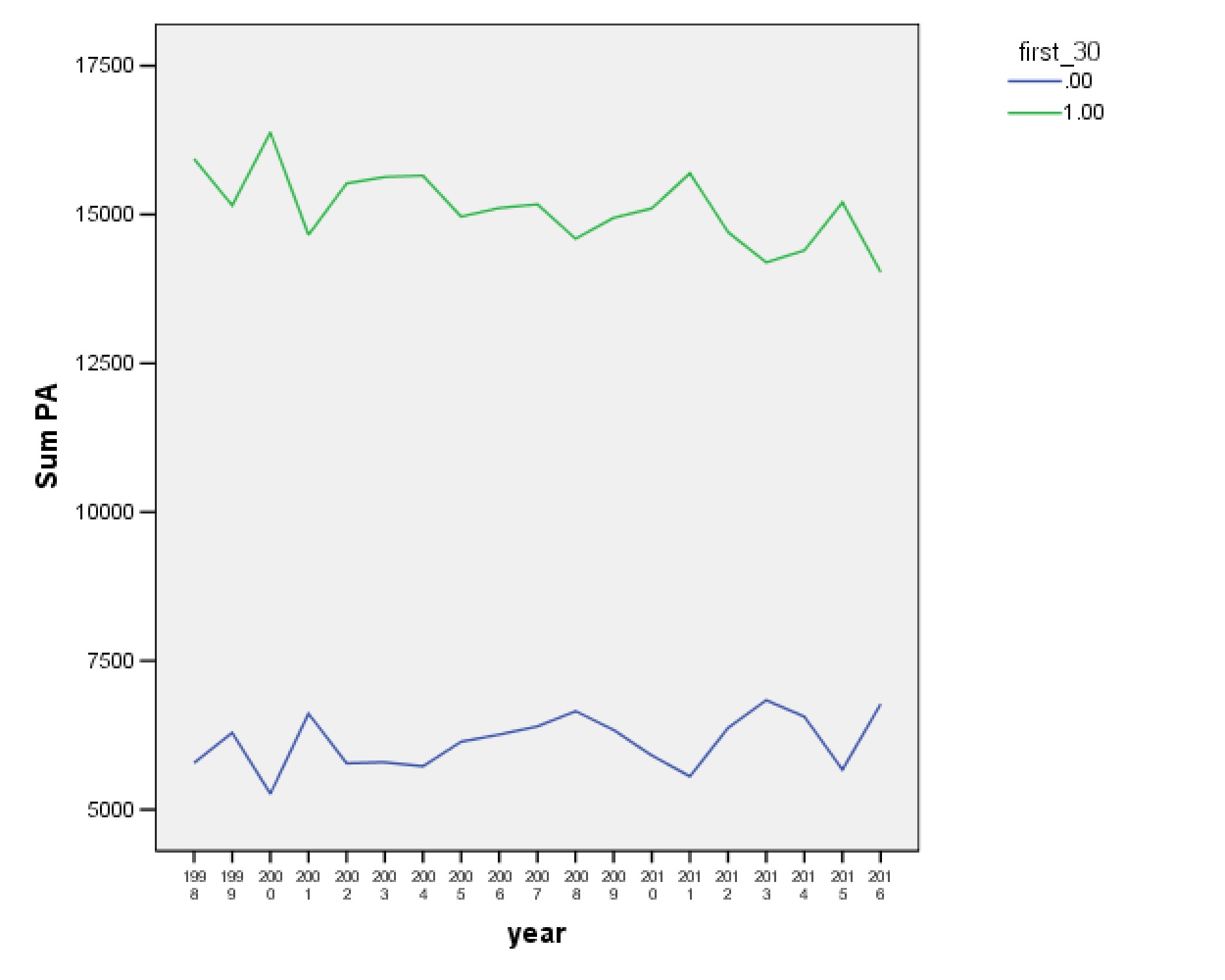 In center field, we see that over time, the playing time split between starters and backups has remained fairly consistent during the last couple of decades. All of the other non-left field graphs look roughly like this. Some positions allocate more playing time to their backups, but that split hasn’t changed much over the years for each position.

Left field has always been a position with considerable churn. In 2016, no position other than pitcher had more players appear there. We know that backup catchers play comparatively more than other bench players do, because there are certain “enforced” days off for catchers (day games after night games, second games of doubleheaders, and “personal catcher” days). What’s surprising is that “backup” left fielders play more than backup catchers. Or maybe we should say that starting left fielders are doing more than just playing left field, and while they’re away, someone has to hold down the fort out by that 39-foot wall.

Here’s a breakdown, again using 2016 numbers, of how many plate appearances the “starting” (top 30 by PA) players at each position logged at a defensive position other than that “starting” position:

The average “starting” left fielder in 2016 also had an average of 91 plate appearances at other defensive positions, a number that has more than doubled in the last decade. Not surprisingly, the most popular spots for our wandering left fielder to moonlight were right field (38 of those 91 PA, on average) and center fielder (35 PA), but we also saw “starting” left fielders playing third base (7 PA), second base (5.1 PA), and in a bit of a surprise to be bringing up the rear, first base (4.9 PA). In 2006, when a left fielder went wandering, he wandered almost exclusively to right field, left field, or first base (in that order). Now, we see left fielders hacking it at second and third.

Or perhaps the diagnosis is that “starting” left fielders just aren’t playing as much in general. Here’s a graph of the average number of plate appearances logged in each season by the starting left field corps. 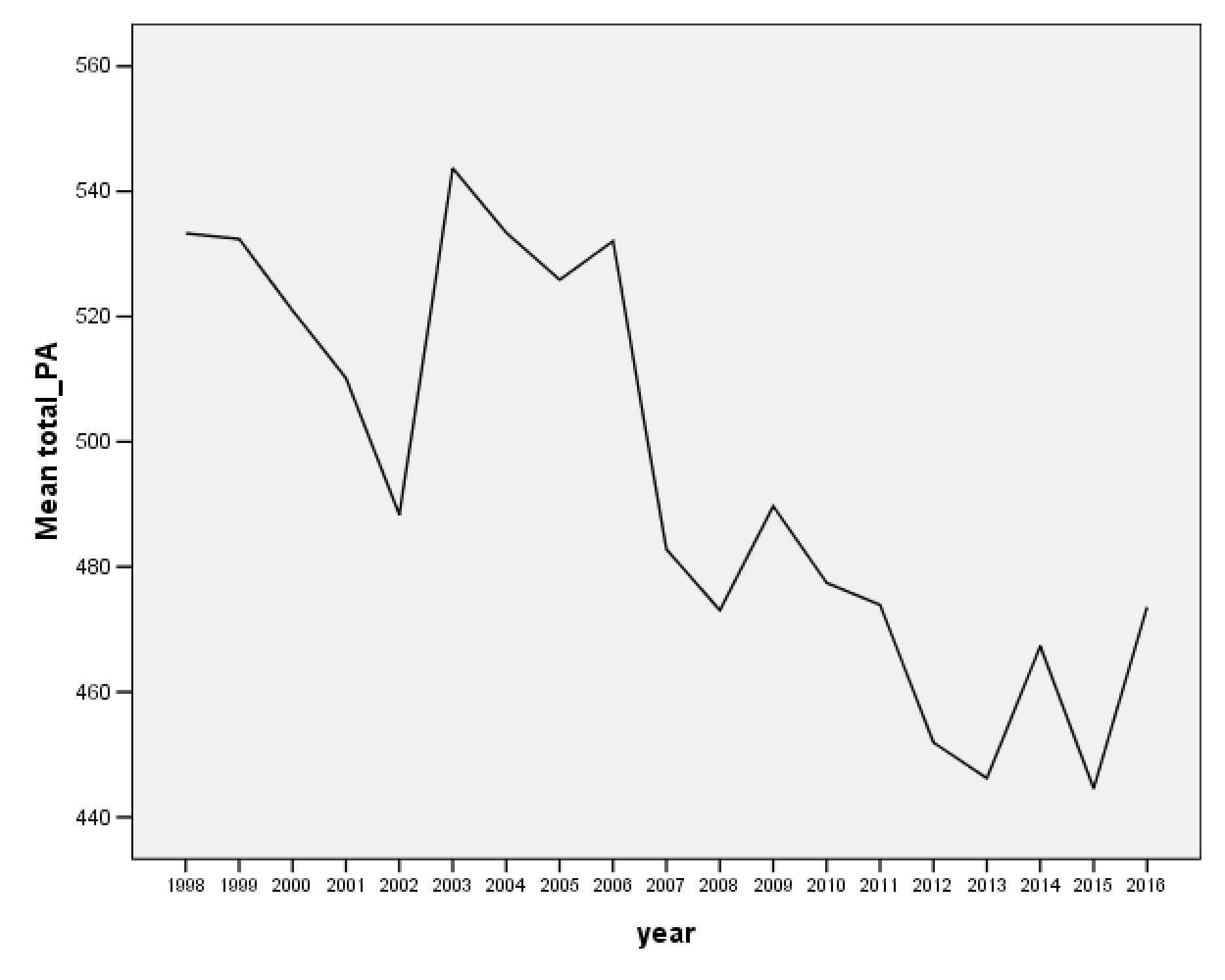 In fact, if we overlay this graph with the similar graphs of the other eight positions, we’ll see that the past 10 years for left fielders have been rather unique in terms of playing time: 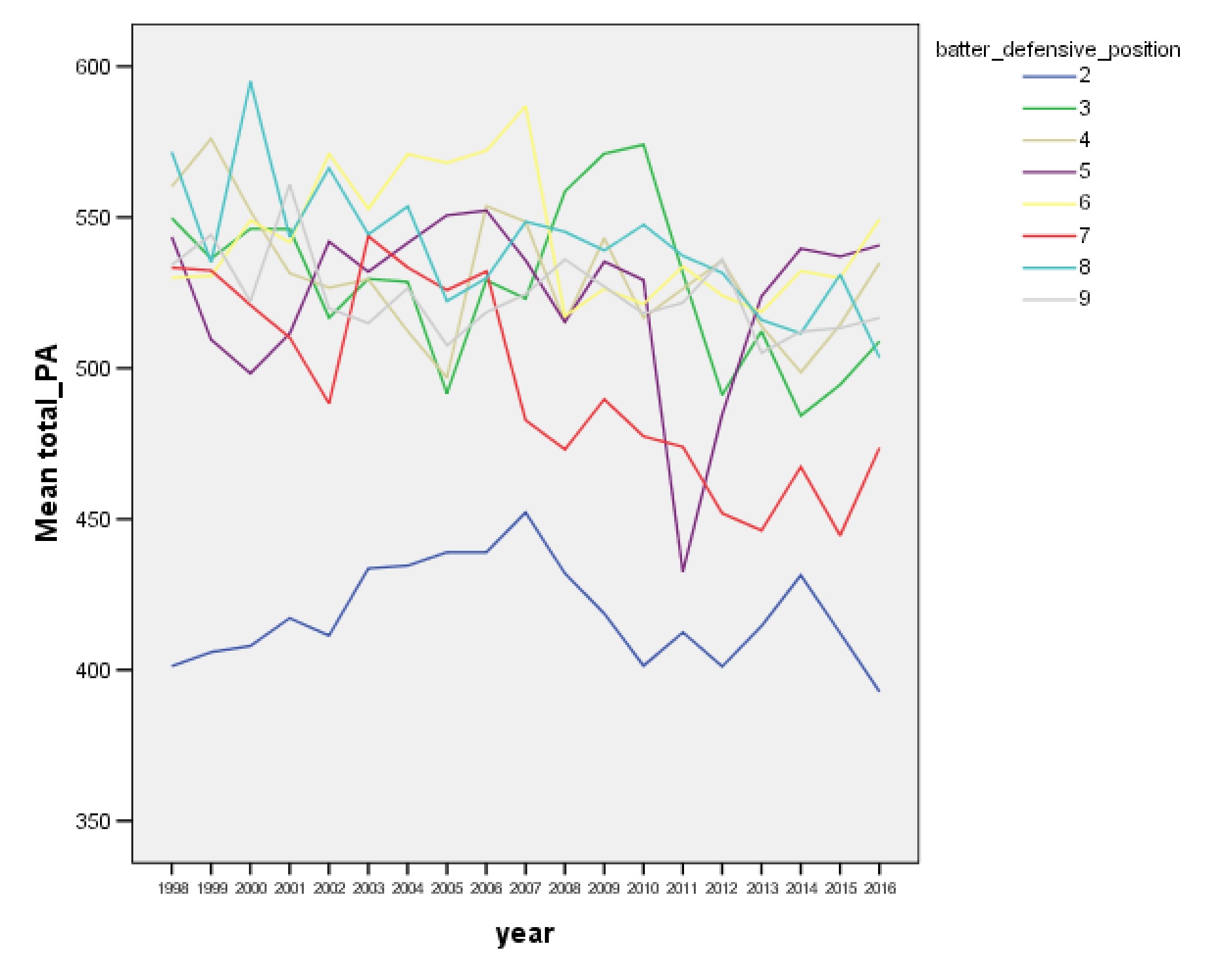 We see that starting left fielders (now in red) used to get roughly the same number of plate appearances as everyone else did, other than catchers (and we all know catchers are their own species). 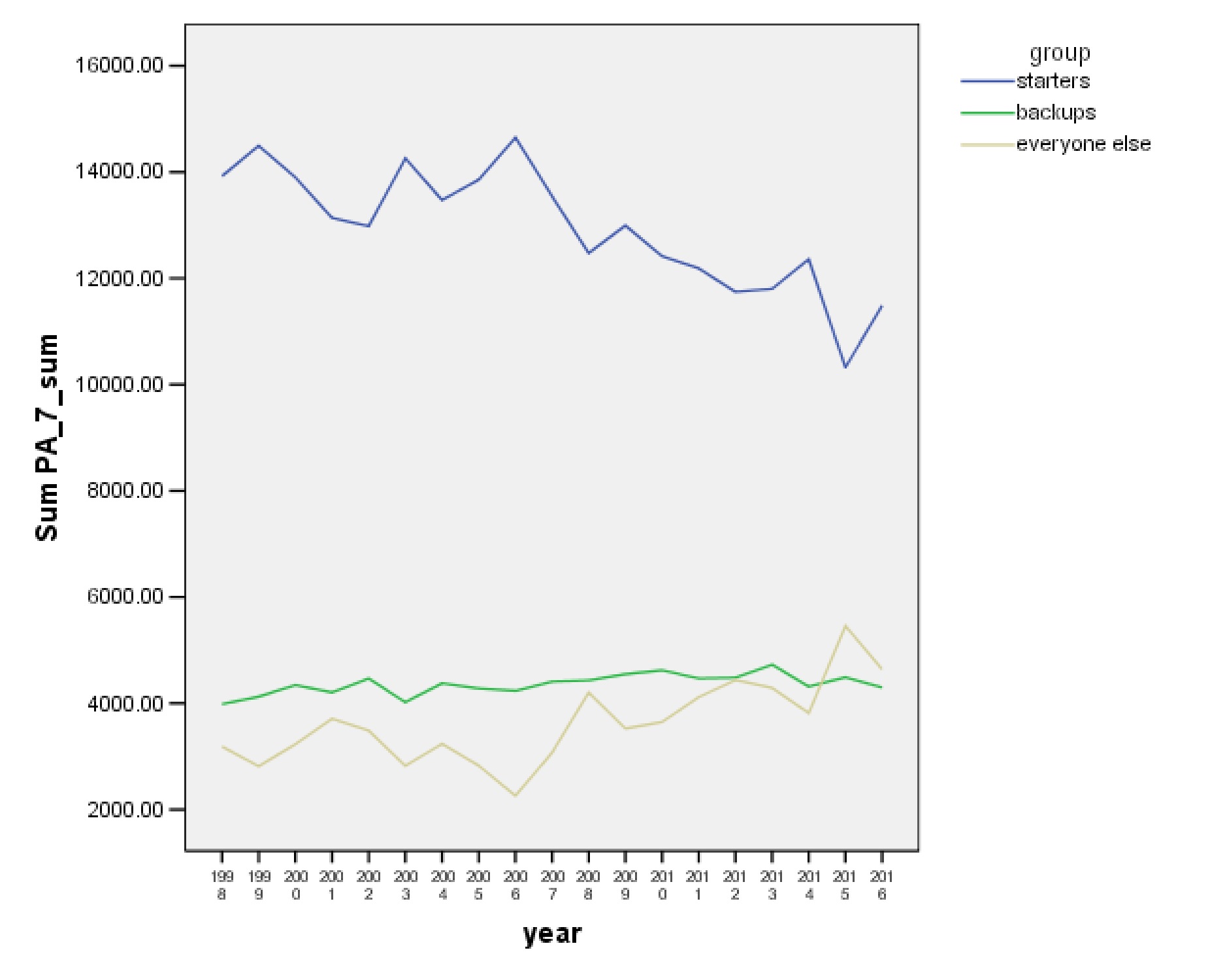 Look who’s actually been the ones stealing those plate appearances from the primary left fielders! It’s the occasional/part-timer left fielders, and not the primary backups. Again, this is the only graph among the positions that looks like that. What on earth is going on? Who are these moonlighting left fielders?

It turns out that there are a lot of them, and where they come from has changed over time. I coded all of these part-time left fielders by the defensive position that they played most often. Here are the data for 2016 and 2006.

We see here that in 2016, our occasional left fielders were more likely to be a costumed infielder than they were 10 years ago, rather than just another outfielder seeing how the left side lives. We’ve entered the world of “meh, I guess just stick him in left field.” It’s an interesting gambit. We’re seeing players who are clearly athletic enough that they play positions further to the “good” end of the defensive spectrum, being told to do the best they can in left field. Left field has long been considered a refuge for players who can hit the ball, but who can’t … well, let’s just stay positive and say that they can hit the ball. Even if a player has no formal training in left field, can it really be all that crazy to send someone out there who at least has the athleticism to make it at second base?

Here’s a little more data that clarifies things a bit. This is the percentage of time that a batter faced a pitcher of the same handedness, based on the position he was playing:

Left fielders are the most likely hitter in the lineup to have the platoon advantage. Some of that is due to the fact that most pitchers are right-handed, and the four positions that see the most platoon advantage are the ones where left-handed throwers (who are usually left-handed batters) are able to function, but that doesn’t explain why left fielders are five percentage points ahead of right fielders, where a southpaw will also fit in just fine.

If a manager comes to the ballpark and has some idea that his best hitters for the day—considering the matchups—include five of his infielders, must we be so tied to the idea of position, or at least for the spot on the field that actually does the least defensively? Maybe our manager can grab an extra platoon advantage by treating left field as a slush spot.

Well, now that we know what’s happening, why is it happening? Here’s a graph showing home run rates (per PA) for hitters at the four corner positions, long viewed as the “power spots” in a lineup: 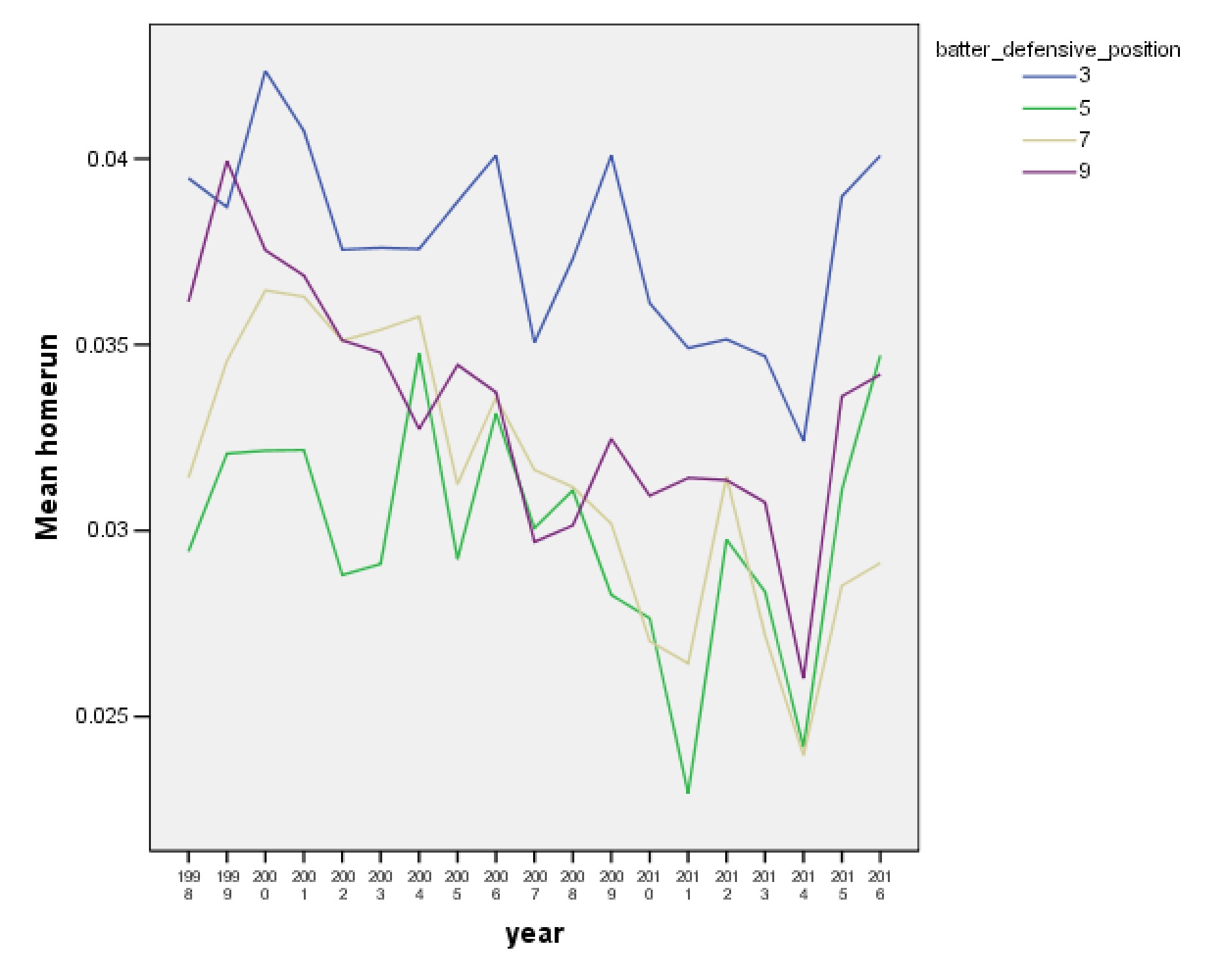 Everyone’s had a little bounce back in power since 2015, but prior to that, we see that both left and right fielder home run rates were declining faster than first or third base home run rates. Left fielders stopped hitting for as much power, and that traditionally was what kept a left fielder in the lineup. (Because someone will ask, I excluded a certain Bay Area left fielder who “retired” in 2007 from the sample and it didn’t really change things.)

If there aren’t as many pure power hitters around, at least ones who play the outfield, why not squeeze what value you can out of left field by playing a shortstop out there in front of that giant wall? What could possibly go wrong?

The evidence suggests that major-league teams are starting to view left field as a slush spot. They might have a player who spends the majority of the time in left field, in the sense that he might get slightly more than 50 percent of the playing time, but if he’s not a particularly inspiring hitter, it’s also possible that his manager won’t think twice about platooning him or replacing him with another player who is just a better matchup that day. It’s not like you need a certification to play left field.

But this all has implications for how we value left fielders. The idea of WAR(P) is based on an assumption that there are starters and there are backups, and that if a hitter were to suddenly disappear, he would be replaced by his backup from the same position. The evidence suggests instead that managers might not reach for the fourth outfielder, like WARP assumes, but that they might instead reach for the best hitter on the bench and just throw him in left. That might raise the actual “replacement level” bar in left field. And as positional flexibility becomes the law of the land in baseball, we may start to see this with more positions.

And so we begin to see how the evolution of the game might cause us to consider how our metrics to describe the game need to evolve as well.

You need to be logged in to comment. Login or Subscribe
NickG112002
Do any other positions show a move in the opposite direction?
Reply to NickG112002
pizzacutter
Not as of 2016. I would imagine if we were to see another position start in this direction, it would be right field. I very much doubt it would ever make its way down to shortstop.
Reply to pizzacutter
tnt9357
An alternate title for this could be "Joey Gallo, left field is calling". (A billion points for getting the reference)
Reply to tnt9357
jfranco77
I'm racking my brain trying to think of non-Cubs who fit into the 2B/3B buckets. Hernan Perez? Soon to be Eduardo Nunez?

The shifting between LF/CF is probably due to more athletic outfielders being able to handle both spots.
Reply to jfranco77
MartnAR
Interesting piece. I started reading and you immediately answered my following question: How does this compare to other positions?
Now what I'm interested in seeing is how this affects WARP in the short and long-term. Will we start to value LFs differently? We've started to see a shift in SS over the past couple of years, maybe we're seeing the same in LF as a response to this.
Reply to MartnAR
johnnygruber
Really interesting research and findings. Any thoughts on what happened to 3B's (in purple) around that dip in 2011-2012?
Reply to johnnygruber