Of course, Barnes isn’t the only one at fault for such a failing. There are secondary characters who need to be recognized, along with a few who gave kids something to emulate.

Here is Red Sox catcher Christian Vazquez, set up outside before Barnes throws his pitch. 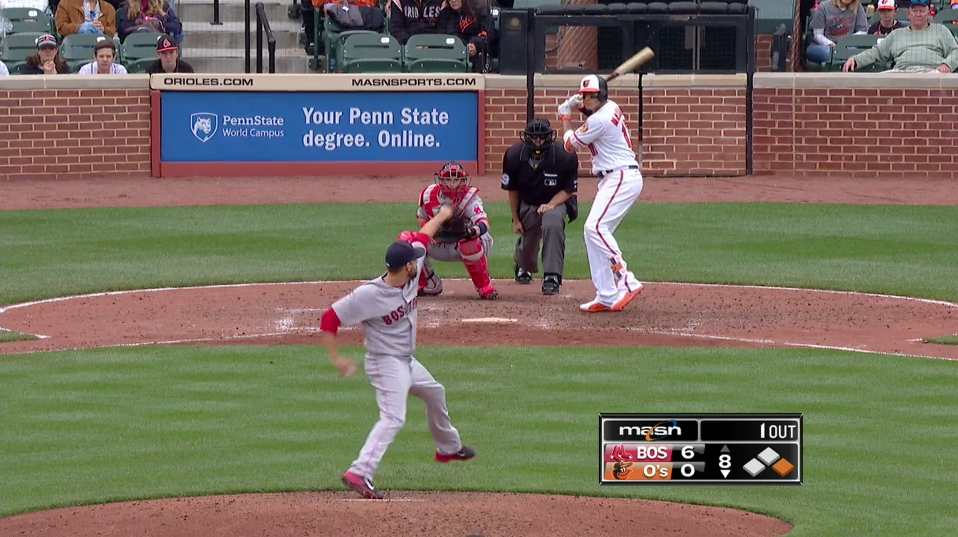 Here is Vazquez, crouched in worry that Machado just took a 90 mph fastball to the head. It seems a low bar to clear as far as human empathy goes, but then again, Barnes seems unfazed. 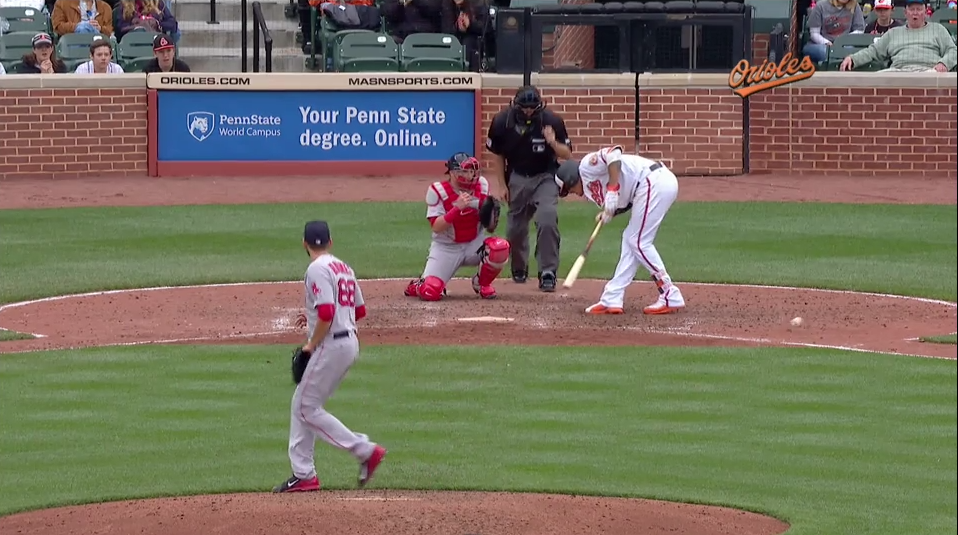 And here is Vazquez, awarding Machado first base. Vazquez’s demeanor over these 15 seconds is the most damning evidence that Barnes knew every bit of what he was doing. I imagine it will also play well with Christian’s mom, who probably delights in knowing that she raised a man capable of demonstrations of caring in the face of poorly behaved co-workers. 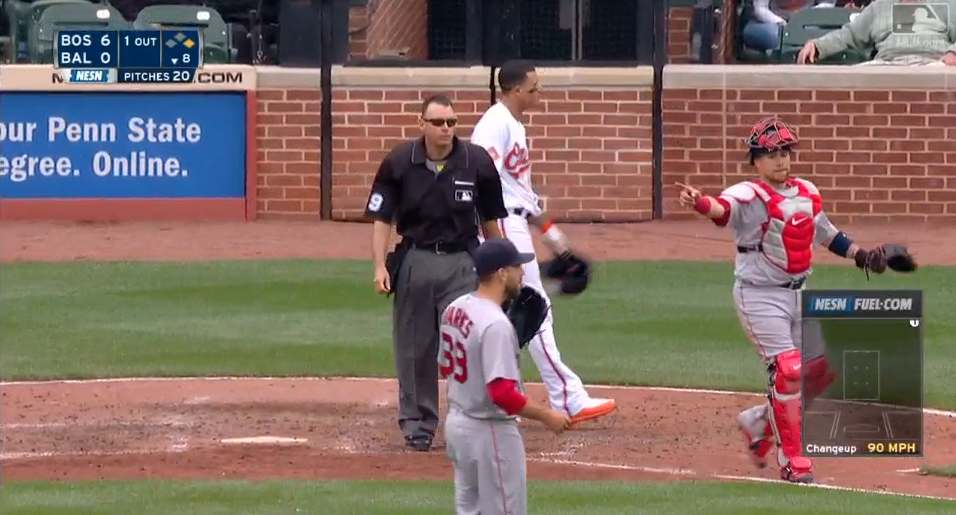 A lot of the value managers add is hard to quantify, but if there were such a thing as manager WAR—or WARM, maybe—I’d feel comfortable saying Buck’s little trot was worth half a win. All we ever want to know is that people really care about us, and few things convince us that their affection is real more than them rushing to be near us more quickly than they have to.

All these things take to escalate is one guy going over the rail. One guy goes over the rail, and you have dudes coming in from the bullpen, and a secondary character who reveals he really, really wants to fight, and a lot of nonsense. Chris Sale makes you think he’s going to cause problems. Rarrrr that’s a foul ball. He’s mad. He’s throwing his hands up! Not that he’d throw a punch himself if it came to it; that’s what bench bats are for. Conflict has a way of clarifying hierarchies. 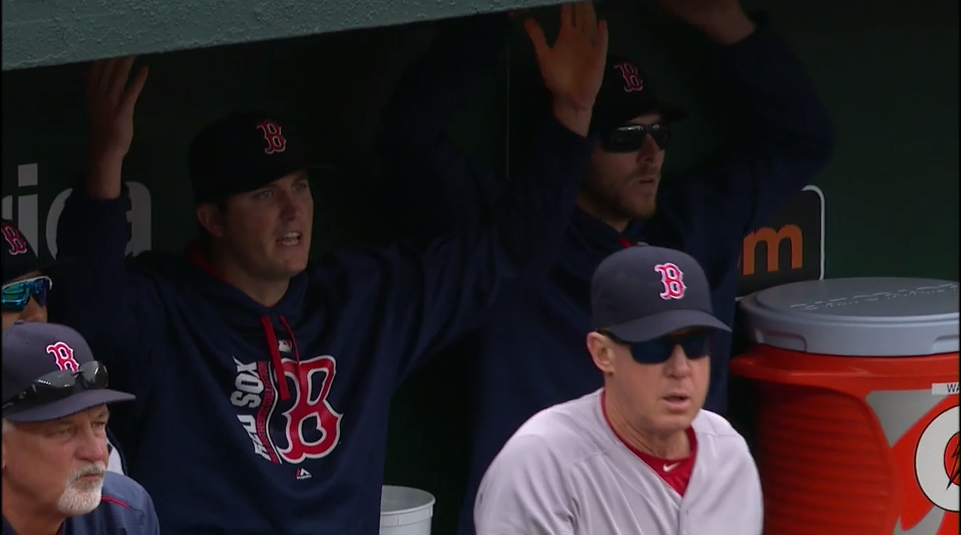 But Chris just wants some seeds. He could be going over the rail, but instead he’ll have some seeds and stand around, just like he normally would. There’s a lot to be said for being the guy who doesn’t fight even though he’s grumbled. 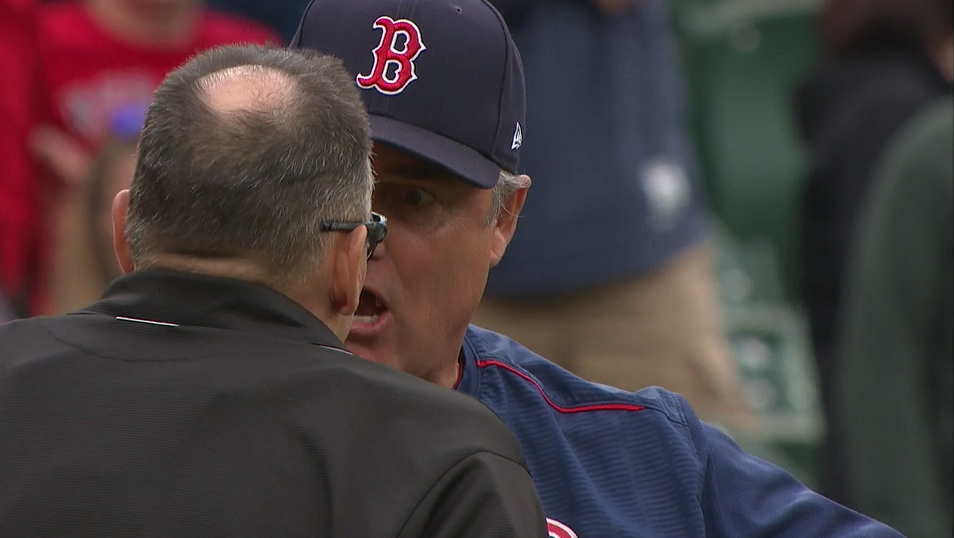 This expression was not a reaction to Machado almost getting hit in the head. This expression was a reaction to Machado standing on first base after the home plate umpire mistook the sound of a fastball hitting his bat for the sound of a fastball hitting his head. This is not the face of someone who asked his club to make good choices. This is the face of someone at fault. Or, half of that face and a fairly normal looking ear.

John Farrell is 54 years old. He once had his jaw dislocated by his own player trying to restrain him as he argued with an umpire. He’s seen things. There’s something profoundly disappointing about a grown man not setting a better example, if only out of pure exhaustion.

This is Machado’s sixth inning at-bat against Red Sox starter Eduardo Rodriguez. One of the pitches almost disappears from the plot, it’s so far inside. We don’t know what was in Rodriquez’s heart, but we might guess that he was trying to plunk Machado. 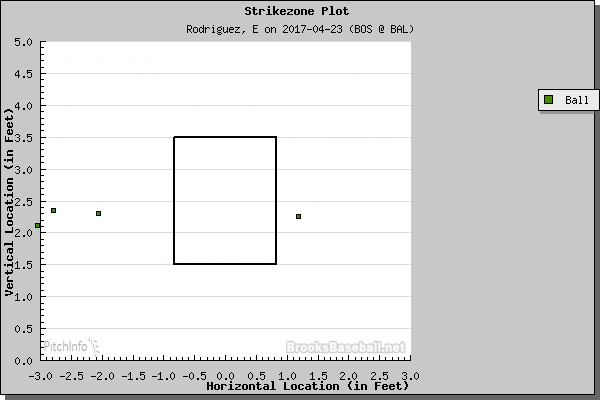 Here are two pre-teen boys watching that at-bat with their Mom/Aunt/Sitter/Older Cousin/Family Friend. We’ll call them Joe and Will.

Joe and Will see Machado getting pitched inside. They can tell Rodriguez is probably trying to hit him. Boston is up by six. Their starter is nearing 100 pitches. This is the time. By the third pitch of the at-bat, they’re sure. And they almost tell their Mom/Aunt/Sitter/Older Cousin/Family Friend, but then they get distracted. They’re kids. Maybe they just swore out loud for the first time. There’s a grownup right there. They could be in trouble.

They also might enjoy a fight. So they go from caring about Manny to caring about themselves. They forget to raise the alarm. It's OK; they still have time to learn. They’re pre-teens. They haven’t grappled with the Trolley Problem yet. What almost happened wasn’t really their fault. But they didn't help. They saw something and enjoyed swearing instead.

These Folks in the Crowd 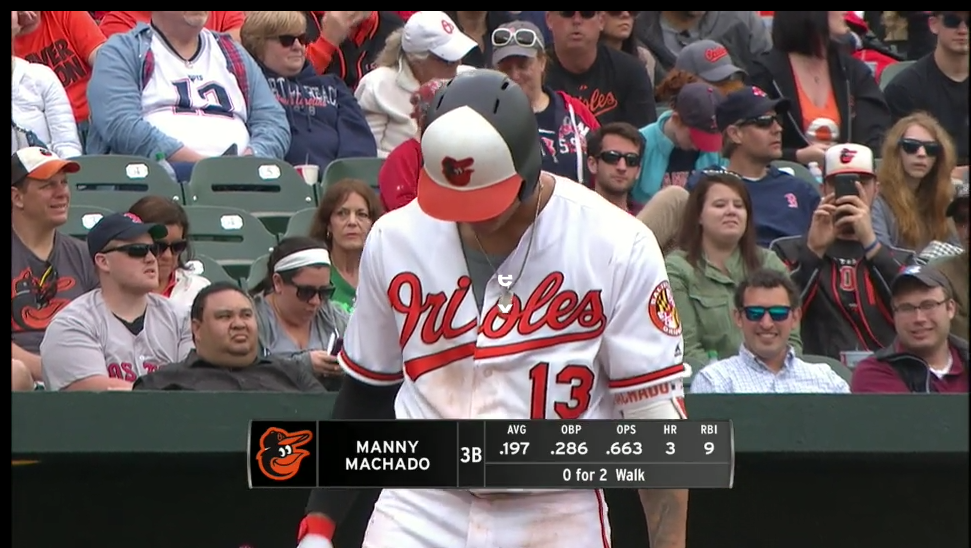 Come on, how did not one of you stand up and yell, “PLEASE DO NOT BEAN HIM!”

I bet if just one of you had stood up and yelled directly at Barnes, “PLEASE DO NOT BEAN HIM! THAT COULD BE DANGEROUS!” that Barnes doesn't try any funny business. How could he? He was asked nicely and that request is now part of the record. Non-compliance makes him a monster.

We expect too much from ballpark crowds, and I’m generally not bothered if folks want to spend the game in their phones. But I do ask that when given the chance to potentially save a man’s head, that someone shout a bit. I can hardly be faulted for that.

You need to be logged in to comment. Login or Subscribe
gwmott
You left out one person to blame, Machado. Regardless of what they said about it after the fact, both Machado and Pedroia know the slide was dirty play and maybe intent to injure. There's lots of precedent with Machado, and I don't disagree with the rest of your argument, but ....
Reply to gwmott
jdeich
No one "deserves" to be hit in the head with a fastball. The whole "Let's all injure each other" machismo is dumb enough without escalating to a potentially career-ending (or even life-threatening) injury to the eye or brain.

If Machado's slide was meant to cause injury (and I don't think it was), let the league handle it with suspensions and fines, like adults.

Heck, as a "regular person", if I intentionally threw a baseball at someone's head, I'd assume a felony charge or two.
Reply to jdeich
lopkhan00
Say what you will about Machado, but at least he had the goddamn common decency to give him a reach around.

Reply to lopkhan00
earlweaver
Why is Machado to blame here?...The guy clearly didn't intend to hurt Pedroia...Farrell then waited 43 hours until the had a sufficient lead, and had two different guys throw at him, the second one at his head...Pedroia was embarrassed by it...Machado kept his mouth shut, stepped back in the box and then Frank Robinson'ed a shot to dead center field...Farrell is the mental-case here...
Reply to earlweaver
robustyoungsoul
People still blaming Machado on this one despite all visual evidence and the reactions from the players actually involved in the play themselves just suggests to me that when it comes to some things, people are going to believe whatever they want no matter what. Trying to discuss this at this point is like trying to play chess with somebody who thinks they are playing checkers - they'll declare victory even though they aren't participating in the same game.
Reply to robustyoungsoul
jfranco77
Vazquez setting up that far outside means that either 1) he really doesn't know what Barnes is about to do or 2) he does know, and he's trying to get Machado to lean in a bit.

I don't know which is more likely.
Reply to jfranco77
jsdspud
When I first saw the picture, I was thinking 2). Set up outside and bust him in.
Reply to jsdspud
chrisw
It was a legal slide, not to mention the fact that the field was wet, so Machado probably slid further than intended. He immediately went to help Pedroia as he realized he might have hurt him. Rodriguez tried and failed to bean him. Should have been over there. Barnes should get a week suspension for throwing at the head.
Reply to chrisw
oldbopper
Rodriguez was trying to hit him, not bean him, which is a definite distinction. A fast ball to the wallet is part of the game.
Reply to oldbopper
danrnelson
I just hate Barnes' and Farrell's clear BS in saying he was trying to get a high fastball at the hands to get weak contact. Don't insult our intelligence. We saw where Vazquez set up. I hope they both get very long bans. There's no place in the game for this kind of garbage.
Reply to danrnelson
geer08
Good piece, and a nice tip of the cap to the kind of fun, quirky stuff Sam used to do here. I'm glad that spirit rages on at BP.
Reply to geer08
bhacking
A 4 game suspension for deliberately throwing at someone's head is a signal from MLB they don't consider this a serious problem. I wonder how long the suspension would be if Machado was hit in the head and out for a month with a concussion?
Reply to bhacking
Ambrose Benkert
Intended or not, the play basically ended Pedroia's career.
Reply to Ambrose