Tyler Cravy and the Line

On one side of the line lies the big leagues, and its big stadiums, big teams, and big crowds. You stay in 5-star hotels, travel in style, and make more money in a month than most Americans earn in a year. You ply your trade against the best of the best, chasing all-star games, endorsements, and trips to the World Series.

On the other lies Triple-A. The ballparks are either cartoonish or dingey, and there are far many more plastic seats than people to fill them. The hotels are old hat, the flights leave at ridiculous hours, and the salaries are, well, considerably less lucrative. You may or may not care whether you win any games, but you’re probably not cheering for the role-players on the big league team. Many of your teammates are privately rooting for your failure; perhaps you are rooting for theirs as well. 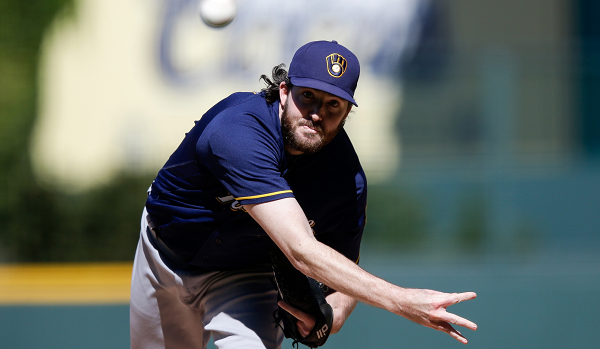 This is the line Tyler Cravy straddled throughout camp. A competitive right-hander with fringy stuff but moxie in spades, Cravy spent six grueling weeks battling for the last spot in Milwaukee’s bullpen. He knew the stakes and pitched his ass off: in 13.1 innings, he struck out 11, walked only 3, and compiled a tidy 2.03 ERA. Alas, it wasn’t enough. Pittsburgh unexpectedly released Jared Hughes, and Brewers GM David Stearns snatched him up two days before the opener. Just like that, the vacancy in Milwaukee’s bullpen slammed shut at the eleventh hour.

Cravy, as you might expect, felt betrayed. Speaking to the media, he said “It would just be nice to have the honesty straight up front instead of, ‘Hey you’re competing for a job,’ then literally out-compete everyone and be told, Sorry, we have other plans.’

“It says a lot about the integrity, or lack thereof, of the guys running the show, but what are you going to do?” He added that he was “not sure I want to play for guys who treat (me) like this,” saying that he might quit and pursue “… a 9 to 5 job where I get treated like a human.”

The words are as strong as they were emotional; Cravy ultimately accepted the decision and one imagines he would have been more diplomatic had he slept on it. Regardless, you have to feel for him. I’ve used the word “literally” in anger too, but only when close to tears. It’s tempting to think “just go pitch well, Tyler, and you’ll be back,” but the advice is hollow. Opening Day is special, and Cravy has never tasted one. Moreover, in his case, Triple-A means Colorado Springs, a graveyard for 27-year-old righties with a 91 mph fastball and a middle school strikeout rate.

But while Cravy is an easy hero, his story has no villain. It’s not Hughes, a bystander far too talented for the waiver wire in the first place. It’s not Stearns either: His duty is to build the best baseball team possible, and he’s will within his rights to decide that Cravy wasn’t one of his top 25. He promised a competition, not a job. If anything, he deserves a nod for deftly responding to pointed criticism – not only from Cravy, but also from Rob Scahill, who felt similarly jilted.

Nobody was in the wrong. Baseball is a competitive game, and the cruel line facing Cravy is at once razor thin and agonizingly resolute. Baseball hath no hell quite like a life on the taxi squad.

A Mascot for All Seasons

Earlier this week I learned the answer to a question that has been bugging the baseball world for years now. The White Sox High-A affiliate, the Winston-Salem Dash, are named after the hyphen in the city name. Maybe you don’t think about High-A teams everyday, and this isn’t quite the dedication to naming a team to make a language joke that it would take rename the Yankees “The New York Monikers,” or call a team “The Los Angeles Angels,” but surely it should be enough to earn the Dash the undying loyalty of baseball fans who are also indulgent English major nerds; i.e the entire BP staff.

However, in the wondrously wide world of minor league baseball, this is quite common, and there are dozens of affiliates that have dedicated their team name and franchise ethos to win the devotion of a niche audience. For example…

Favorite team of people who have a separate phone to accommodate all the data they have accumulated on a Texas Hold ‘Em app.

So fear not, even in an ever more isolating world of crippling loneliness and loathing, there is a minor league team for you, or at least one willing to rename itself for you if you provide it with the necessary capital to remain solvent.

Devon Travis, Blue Jays second baseman: I took three balls, none very close, and then a strike. I fouled off the 3-1, and then walked on a pitch that was, quite frankly, a horrible call on a slider up in the zone.

Kevin Pillar, Blue Jays center fielder: Devon walked when he should not have. It was clearly a strike. But we'll take it.

Johnson: It was absolutely a strike.

Pillar: So I'm up, tie game, runner on first. Fourth inning. Big … well, medium spot. Medium spot. Would be real nice to do a little something.

Pillar: I'm just up there trying to do something.

Vazquez: I framed the hell out of it, honestly.

Pillar: The second one was way inside. Moved my feet a little. Or my knees. I moved my lower extremities generally is what I'd say.

Young: Those kind of pitches, you know, the way they move in on the right-handed hitter like that, I'm ready for anything. Ready for something coming my way.

Johnson: I didn't want to throw something down the middle.

Pablo Sandoval, Red Sox third baseman: I was in my position. Adjusted my belt a little. Just prepared for whatever.

Johnson: I got one up but it rode in on his hands so he couldn't get much on it.

Pillar: Pretty good pitch. Tough to do anything with it. I probably should have just eaten the strike.

Travis: The crowd made some noise but the ball wasn't really going anywhere. You watch the left fielder, he didn't have to go but a few steps, plenty of time to get under it.

Young: It was a nice medium fly. I took a couple of steps. Glove up. Ball in. Threw it back.

Pillar: Just flied out, headed back to the bench, started thinking about defense.

You need to be logged in to comment. Login or Subscribe
jfranco77
Are the Yard Goats in fact named after old Navy sailors, and not the 4-legged critters we normally think of when we hear the word goats? I assumed they were but maybe that's just me.
Reply to jfranco77
BrewersTT
Don't know what the ball club had in mind, but one meaning of "yard goat" is a small switching locomotive in a rail yard.
Reply to BrewersTT
lmarighi
Really enjoyed the thoughtful piece on Cravy. It's easy for me to sometimes forget that the names on the stat line (or on my fantasy roster) are actual human beings, and these kind of little stories help remind me of that. One of the reasons I love the Lindbergh/Miller book "The Only Rule is That it Has to Work" was because Ben and Sam did a lot of learning about what it means to work with humans. Thanks for bringing this kind of thing to BP.
Reply to lmarighi