While everyone is (rightly) excited about Eric Thames and his extreme early success after years playing in Korea, there’s another bat-first 1B/DH type who is raking. Trey Mancini of the Orioles has capitalized on a tremendous cup of coffee last September and snuck into seven games so far in 2017. The result has been, to put it bluntly, incredible: his four homers pair with his three dingers last year to give him seven bombs in just 39 plate appearances and a career slash line of .361/.410/1.000. In other words, he’s following the famous Kevin Maas/Chris Shelton/Brian LaHair script quite nicely.

For now, Trey Mancini is the greatest major-league hitter who has ever lived. Sure, you have to qualify that by saying “on a rate basis” and “with a minimum of 35 plate appearances,” but it is wholly, if temporarily, true. We can use the incredible Baseball-Reference Play Index to find the top 15 hitters by OPS+ who ever lived with Mancini’s mark of 39 plate appearances. It’s a veritable who’s who of the game’s most inner-circle Hall of Famers and fearsome hitters. Check it out: 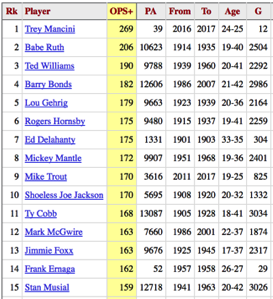 The best of the best! Ruth, Williams, Bonds, Gehrig, Musial, Mantle. Mark McGwire swoops in and Mike Trout is already a top-10 lifetime hitter. Thirteen of the players on this list are among the greatest hitters who ever lived, plus the Mighty Mancini … plus one more outlier. This is the guy I care about: Frank Ernaga. What. The. Hell?

He slots in at no. 14, between Jimmie Foxx and Stan Musial with a career 162 OPS+. Foxx and Musial are two of the greatest hitters ever, but I’d never heard of Ernaga until this week. Like Mancini, he does not belong. Like Mancini, he only makes this list because he maxed out at 52 plate appearances, never even losing his rookie eligibility. But unlike Mancini, Ernaga was out of baseball without ever getting an extended chance to prove he wasn’t one of history’s greatest batsmen.

Mancini will get every possible chance to lower his OPS+ to the C.J. Cron-ian levels we expect of him, but Ernaga ended his career without letting that stellar slash line droop to the level of mere mortals. He’s forever immortalized with the greats. How does something like this happen? Was Ernaga injured or killed, somehow physically unable to return to the field after a remarkable debut? Nah. Instead, he washed out of baseball because—as I understand it—the Cubs didn’t think he was good enough to play on their below-.500 1957 and 1958 teams.

The full story goes something like this: after signing with the Cubs in 1953, he worked his way up through the minors to eventually fill in with the big club in early 1957. In the first plate appearance of his first big-league game—May 24, 1957—the right-handed-hitting outfielder drew an all-timer: Warren Spahn of the Braves. Ernaga took the lefty deep, homering in his first at-bat. In his second plate appearance against Spahn, Ernaga tripled. His first game with the Cubs ended with him going 2-for-3 with a homer, a triple, and a walk in a 5-1 Cubs victory.

He pinch-hit the next day, then returned to the starting lineup to face another lefty in Juan Pizarro, and promptly repeated his performance from his debut. He went 2-for-3 with a homer, a double, and a walk in a 5-4 Cubs victory. Then he hit a pinch-hit triple the next day. Over the next couple of weeks, Ernaga would make a few more starts for the team against left-handers and a few more pinch-hitting appearances, but he’d obviously never replicate the success of his first week in the majors. He struck out three times against Sandy Koufax in one game, but worked two walks and a single off Harvey Haddix in another.

Despite the early success and a sparkling overall line, the Cubs had seen enough of Ernaga and returned him to the minors. At the time, he was hitting .320/.469/.800 over 32 plate appearances. I can only assume that the Cubs were thinking the following: Ernaga wasn’t one of the team’s starting players and his propensity to strike out (nine punchouts in those 32 appearances) and walk (seven free passes in the same span) weren’t looked at fondly in that era. Despite his history as a power hitter in the minors and his blazing start, Chicago didn’t give him another test in the bigs until September of that season, and even then it was just three starts and 12 plate appearances. Also, scouting reports at the time didn’t think much of him as a defender, so that might’ve played a part in the way the team looked at him.

In 1958, the Cubs’ incumbent corner outfielders Walt “Moose” Moryn and Lee Walls had their first and only All-Star seasons; it was no surprise that Chicago might not want to unseat them in favor of a rookie, let alone one who couldn’t make the most of his sporadic pinch-hitting appearances early in the season. He was deployed very infrequently in April and May of 1958, making just six pinch-hitting appearances—seven if you count the one time he was brought in as pinch-hitter and immediate pinch-hit for as the Cardinals brought in lefty Phil Clark—and just rapping out one single. Sent back down to the minors to convert to a catcher in Fort Worth, Ernaga toiled there for the rest of the season before getting two more unsuccessful pinch-hit attempts in September.

In an interview, Ernaga mentions that he had a “split finger”—injury, not the pitch—and it hampered his hitting in ’58, so that might’ve been a factor in his play, but he still may have been good enough to play regularly despite diminished performance. He’d never reach the majors again, despite an offensive resurgence in the minors during the 1959 season. He posted a .361 OBP in 129 games between San Antonio and Charlotte, and belted 18 homers. But with no clear path back to the majors, Ernaga quietly retired to a life as a carpenter and contractor in Susanville, California.

By the numbers, Ernaga appeared to be a relatively good platoon hitter with power, patience, and too many strikeouts who couldn’t play much defense. Today, a player like that—think Michael Saunders—is a valuable cog who gets plenty of chances to stick and a nice contract in free agency. Instead, he got off to a hot start, couldn’t follow it up, and the Cubs moved on, unfazed by his debut or the fact that no other Cub in history ever had (or ever would!) hit a triple and a homer in his major-league debut. They didn’t appear to value what Ernaga brought to the team over their mediocre incumbent outfielders, and they sent him packing. Perhaps they saw past the results to the underlying process, and they didn’t like what they saw. I guess they might deserve a little credit for that, even though they may have pushed away one of the better hitters on the team, a young masher with potential.

That’s Ernaga’s story; that’s how a guy with a career .279/.404/.581 slash line never cracks 60 plate appearances. It would never happen today, despite teams’ focus on good process over the vagaries of the small sample. Ernaga either never would’ve made the majors or he’d be given much more of a chance to fail. Just look at some of the early-season heroes today. Trey Mancini will get at least two dozen more plate appearances this month, mark my words. Taylor Motter will get to start often until he starts to slide, even if Jean Segura comes back from injury soon as planned. Franchises today are just more inclined to let talent and performance speak for itself as part of baseball’s meritocracy. Ernaga would at least be given more of a chance to fail these days.

But don’t cry for Frank Ernaga and what might have been. Mancini will fall from the all-time OPS+ leaderboard, and sooner rather than later. He won’t even be a footnote. But Frank Ernaga is an immortal, in at least this one small way. He’ll live forever in our Play Index searches and in the spreadsheets of our heart, nestled between Foxx and Musial, mighty and small.

Thanks to the Baseball Historian Blog for a great interview with Ernaga.

You need to be logged in to comment. Login or Subscribe
NoHRTyner
More of these types of articles, please. I love learning about obscure players.
Reply to NoHRTyner
bhacking
Cool story, thanks. I'd humbly suggest Chris Young might be a better comparable than Michael Saunders who bats left and therefore the more important side of any platoon.
Reply to bhacking
bgrosnick
Yep, that's definitely a fair point! In the first draft of the article, I actually inserted Young's name in place of Saunders', so great minds think alike!
Reply to bgrosnick
markedits
"Stand Musial"? Nevertheless, well done.
Reply to markedits
boatman44
Everyone should "Stand" for Musial.
Reply to boatman44