With the most recent version of its Ball Coach radar unit, Pocket Radar set out to do one thing: make radar accessible. As Steve Goody, the CEO of Pocket Radar, put it:

The radar gun hadn’t really been touched in 50 years because it’s a hard thing to do from scratch, so we quickly identified it as a place where we could innovate. Convenience was a big thing for us.

The radar gun market is dominated by major players at both ends of the spectrum. Stalker offers high-end models ranging in price from $500 up to $1,200 for the Stalker Pro II, the model used by most pro scouts across baseball. These units are big, sometimes clunky, devices that offer a slew of features and a range of up to 300 feet. At the other end of the spectrum is Bushnell, who offers cheap (read: $100 or less) radar guns with performance matching the bargain price point.

Pocket Radar aimed to shoot for the middle ground and deliver high-end performance at a reasonable price. The goal was to make it so that players or coaches didn’t have to break the bank to have a radar unit, but also received performance that was reliable and accurate. 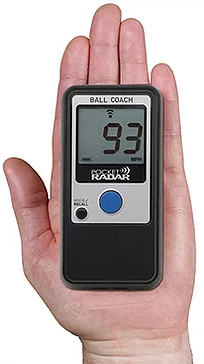 The Ball Coach is designed to be small and easy to use.

Beyond the price/performance equation, accessibility also means that the radar unit should be easy to use and deploy. The Ball Coach is small by almost any standard, and weighs just a few ounces. It can be easily stowed in a pocket between readings. Also, by incorporating common batteries that were replaceable and don’t need to be charged, the Ball Coach works when needed without worrying about charging issues. Goody described their approach by saying, “We wanted to change the way that coaches used radar—making it more like a stopwatch, something that could be pulled out when it was needed—not something that needed to be planned around."

The Ball Coach is, in fact, exceedingly easy to use when needed. One mode requires you to depress the central blue button during the delivery, and the unit captures the velocity of the projectile it’s aimed at. A second mode keeps the unit in always-on mode, allowing you to set it up on a tripod or something similar while it continually captures readings until you turn it off or a set amount of time passes without a reading. You can also change the units from MPH to KPH, if needed. The point here is that it’s not bogged down with a host of modes or options that would make using it more difficult. In the field it’s a simple process of aim, push, capture.

Another piece of accessibility is teaching users how to deploy radar effectively. The packaging includes a lengthy but easy to understand instruction manual to aid first-time radar users in quickly mastering their new tool. In order to deliver on that aim, it has been developed with instructions that provide a ton of information about how to use the radar, potential sources of interference, etc. 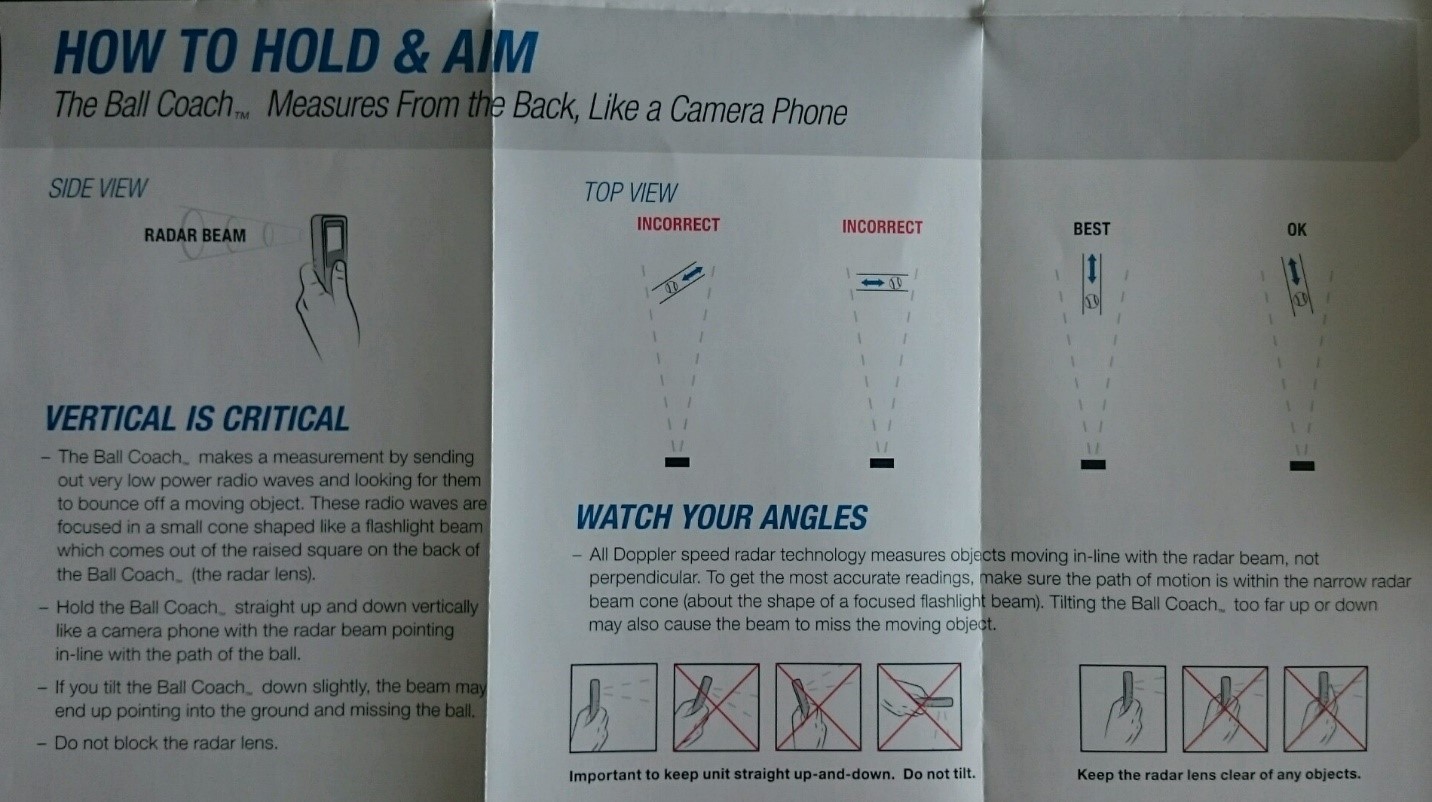 A section of the instruction manual describes proper radar usage.

For Pocket Radar, the target audience isn’t necessarily the pro scout attending your local minor-league team’s games. The goal is to empower coaches at all levels of play, as well as parents, to have access to easy-to-use, reliable radar readings. It’s more at home on a high school field than at a major-league stadium.

That isn’t to say that the Ball Coach doesn’t have its fair share of major-league believers. The Padres were one of the early adopters of the technology, as their minor league pitching coordinator Mark Prior explained:

The Ball Coach radar gun from Pocket Radar is a great tool for instruction and training. Controlling intensity levels in professional baseball can be a challenge for new professional pitchers. The Pocket Radar allows us to monitor arm health as well as instruct players to add or subtract intensity levels based on readings. I encourage our staff to use it as a way to teach new pitches, change speeds on current pitches, and control these intensity levels. The simple light weight product makes it easy for our coaches to keep it close to them at all times and use it effectively in bullpens, throwing program and live batting practice environments.

In order to get a better idea of the performance potential of the Ball Coach, I reached out to Ben Brewster, a player development expert who runs a remote training program that allows athletes to grow and improve without having to live near or travel to an elite baseball camp. Brewster had used the Ball Coach before with his athletes, so I was curious about his experience with it.

We were skeptical [at first], especially given the well-known inaccuracy of many of the budget radar guns on the market. However, because of the remote nature of our company, it was imperative we explore all options so we could potentially recommend a more accessible option to our 100-plus remote athletes. Our biggest requirement going into testing was that the Pocket Radar be within one mph of the Stalker Sport and Stalker Pro II, and be accurate on plyocare and weighted balls of various weights as well.

Brewster needed something that was affordable for his athletes—$1,000 radar guns didn’t really fit in the budgets for most players—but that delivered that high level of performance. I asked Brewster if he was satisfied with the performance of the Ball Coach vs. the more expensive guns. He said it was “nearly identical in testing to our Stalker radar guns, with the exception that they don't read to the nearest tenth”.

Brewster also shared a video of his testing, which I’ll include here as well:

You can feel confident that the data you’re getting out of the Ball Coach is accurate. That means that it certainly has the potential to be a valuable tool—and not just for major-league organizations. Goody described their approach to the product from the very beginning:

We realized that this technology was still very expensive and hard to access. By no means was it democratized. A lot of people that would love to have access to radar guns just weren’t able to do it, so we thought that if we could make a radar gun that was affordable and reliable and easy to use that everyone would probably want one.

Of course, there is a drawback to the Ball Coach unit that will likely keep it from supplanting the Stalker Pro II as the top radar on the market for pro scouts. The Ball Coach’s compact design limits its range to about 120 feet (from the release point of the pitcher) compared to the 300 feet of the Stalker unit. This range limitation means the Ball Coach doesn’t work as well across all MLB or MiLB stadiums, a concern that doesn’t affect Stalker’s guns. Still, Pocket Radar was willing to make that concession to keep the price and size down.

The Ball Coach can be used not only to capture pitch speed, but also batted ball speed (assuming the exit velocity is greater than that of the pitch). One of the strongest selling points for the unit is that it can be used for almost any sport that involves a moving ball, be it baseball, softball, cricket, volleyball, tennis, or anything else. However, it’s worth noting that Brewster saw some anomalies in the readings on extreme under or overload plyocare balls. Still, the Ball Coach has real applications beyond baseball, as exhibited by its use by multiple top D1 volleyball coaches. 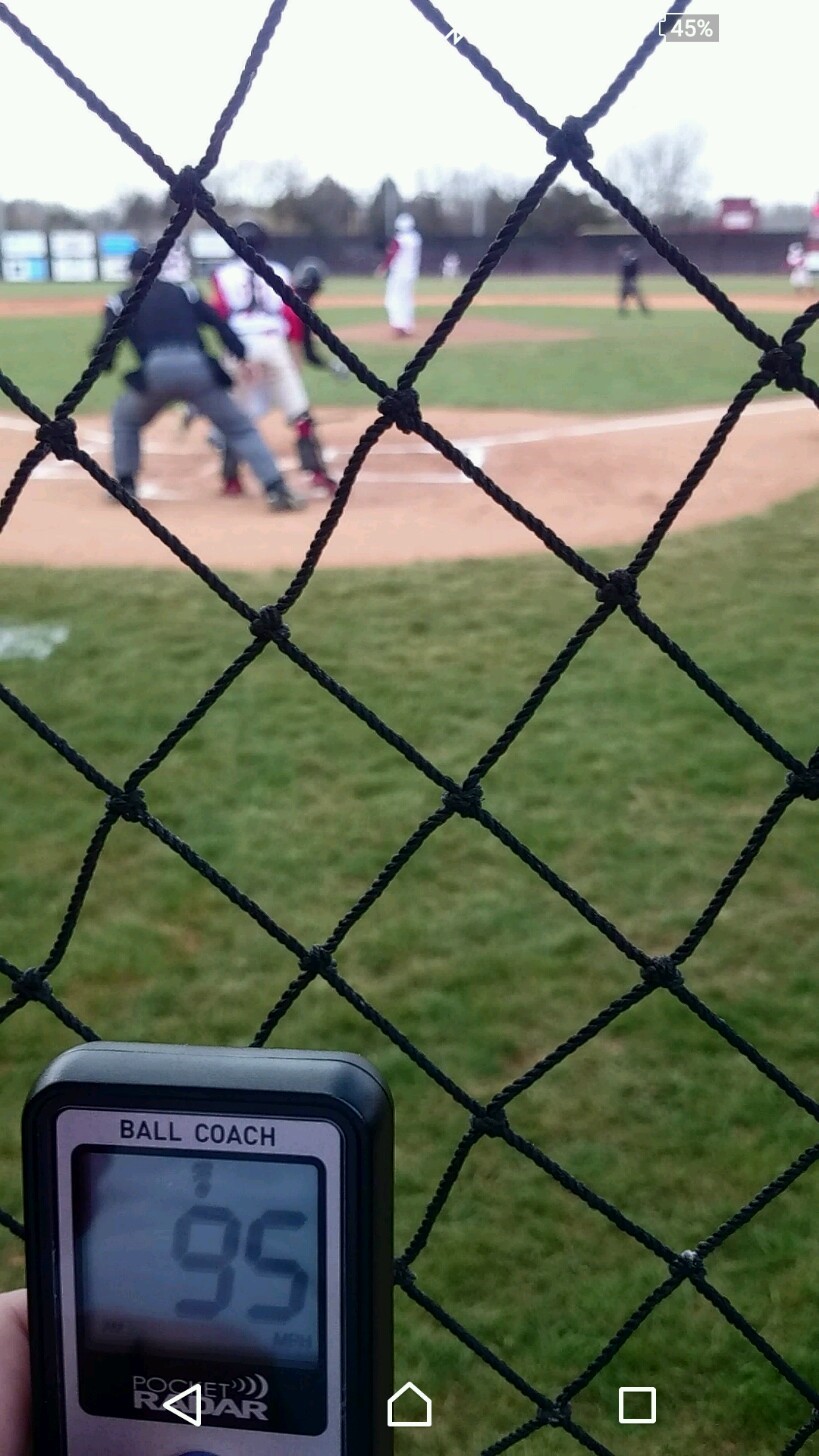 Fundamentally, Pocket Radar’s mission was to make velocity data accessible to more people. It’s hard to argue that they haven’t done that with the Ball Coach. As Brewster put it, “If you want to improve a metric, you absolutely have to measure it. For athletes looking to improve throwing velocity, having an accurate radar gun is mandatory."

The Ball Coach isn’t a perfect product by any means and frankly $300 isn’t exactly affordable. That said, it’s clear that the Ball Coach fills what was previously a bit of a hole in the radar market. Echoing Brewster’s earlier sentiments, Goody noted: “If you overlay measurement onto good coaching, it makes everything better.” It’s certainly hard to argue with that.

The unit does come with a wrist strap for handheld use though.
Reply to BSLJeffLong