Opening Day it the Bronx featured a matinee that nearly treated its attendants to the first perfect game in five years. Starting for the Yankees was Michael Pineda, he of the career 3.20 DRA and 13.1 WARP, against a Rays lineup that took the first series of the season from the Bronx Bombers.

Pineda started the game by getting Corey Dickerson and Kevin Kiermeier to fly out before striking out Evan Longoria for the first of an 11-strikeout performance. After that, Pineda dominated opposing batters, striking out another nine Rays–seven of those swinging–on 78 pitches before surrendering a double in the seventh to his first victim: Longoria. Pineda went on to strike out one more batter before giving up a home run to Logan Morrison the next inning. Tyler Clippard and Chasen Shreve closed out the day by pitching the eighth and ninth, respectively.

Pineda pitched 8 1/3 innings, with 11 strikeouts and two hits, including the home run. His start was a much needed break to a Yankees rotation that has been topsy-turvy over the first week of the season and a lineup that has not produced at the rate it was expected to. 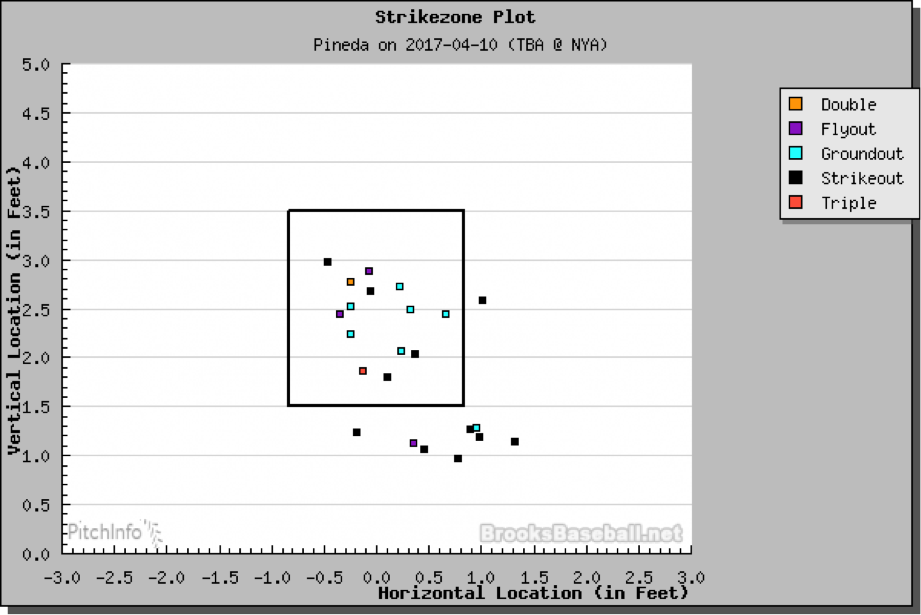 Nevertheless, the lineup also started clicking. Jacoby Ellsbury started the afternoon with an RBI double. Aaron Judge and Chase Headley added a run each in the fourth and the seventh. But it wasn’t until the eighth inning that things got out of control. Starting with a fielding error by Steven Souza Jr. which allowed Brett Gardner to reach base, the following series of events happened: Lineout, Double, Triple, Home run, Single, Single, Fielding Error, Force Out, Fly Out.

Ten men went to the plate, 5 of them scored.

In the bottom of the second inning, Buster Posey was hit in the head by an errant pitch from Taijuan Walker. Posey was immediately taken out of the game for precautionary reasons. As of late Monday evening, he has not developed any concussion symptoms but is still under observation.

Walker was visibly shaken and worried, going as far as asking Nick Hundley to relay a message of concern and an apology to Posey.

To ameliorate the tense event, spectators were treated to one of those rare events that we long for now that we have been stripped of intentional walk shenanigans. Matt Moore tapped a slow roller up the first base line, Walker ran to field it and threw errantly toward Jeff Mathis, allowing both Brandon Crawford and Joe Panik to score. Mathis went after the ball while Walker moved to cover home plate. Mathis returned the ball to Walker, who bizarrely missed it as well; Jarrett Parker took the opportunity to also score before Paul Goldschmidt put an end to the matter.

In Colorado, Wil Myers completed the first cycle of the season and the second in Padres history: A single in the first, a double in the third inning, a home run to start the sixth, and capping it all with a triple in the eighth.

In the top of the second inning of the Astros-Mariners tilt, the following happened: James Paxton struck out Evan Gattis on a low fastball in the dirt. Mike Zunino made the heads-up play of throwing to second, where Robinson Cano was waiting to tag out Carlos Beltran. Beltran realized this and headed back to first too late as Danny Valencia received the throw to complete the double play to end the inning.

With four teams tied in the NL East, the Mets and Phillies are set to break the deadlock with an intra-division battle. Last time out, we saw vintage Matt Harvey dealing on the mound. Harvey will have an opportunity to build on his performance and prove that he is healthy enough to contribute to the rotation. The Phillies will counter with Clay Buchholz, who is looking to recover from Thursday’s abysmal outing against the Reds. First pitch is at 7:05 pm ET.

Arizona is off to a torrid start. After coming back on Opening Day, the Diamondbacks have finished the first week of the season 6-2, surprising everybody who pegged the Dodgers to take the NL West for the fifth consecutive year. By sending Robbie Ray to the mound, they’ll look to keep shellacking the Giants, who they’ve nearly swept in the opening series.

In a curious twist of fate, the San Francisco has Jeff Samardzija as the starter, which means that this will be the second time in less than a week that Ray and Samardzija will face off. The advantage currently goes to Ray so it will be up to the Giants to try and even the score. First pitch is at 10:15 pm ET.

You need to be logged in to comment. Login or Subscribe
bhalpern
Myers really wanted that triple. Glad he didn't face plant around second.
Reply to bhalpern