For a Few Homers More

Friday afternoon’s home opener in Philadelphia, against Washington, happened on a terrible day for baseball: cold, gale-prone, the air still full of Thursday’s sodden weight. How cold was it? Cold enough that Bryce Harper wore an undershirt and only left one button open. Cold enough that much of the sell-out crowd hunkered together on the concourse, hands jammed in their pockets instead of crashing together, quiet enough that I suspected something else was afoot entirely. Wind whistled through lonesome bleachers. The stadium lights pushed back against gray April air, everything muted, and the sepia began to seep in.

In the lone street of this strange green and red town, gunslinger Vince Velazquez fires strikes.

The first time noted Citizens Bank Park baddie Bryce Harper strolls to the plate, he belts a baseball past the lush pastures of right field, his bare left forearm extending beneath the dark-sleeved right. A hawk calls in the lonely air; a beerman brays his chilled wares.

So begins a home-run-riddled shootout, spelled by grisly strikeouts. The combined staffs fell twenty-six batters, and five baseballs fly to their collectible doom, all following Bryce Harper’s doughty blast, in the park where Harper coolly dispatched eleven other baseballs in days prior. The seats beyond the warning track bear lonely crosses, marking their fates.

But the Phillies ride back into the game, will not be cowed, and with but an inning to go, the stadiumfolk whisper: when Harper returns, shall he be pitched to? Will the Phillies dare such a showdown? Jeanmar Gomez flexes his trusty black mitt, rubs up a fresh baseball. A reckoning comes.

Then a mysterious figure steps to the plate, helmet pulled low and bandana balaclava pulled high, obscuring all but eyes narrowed against the wind. Red sleeves cover both his arms, even his ears hidden. Hot dog wrapper-tumbleweeds roll and skitter away; they will not be caught between these fearsome figures. 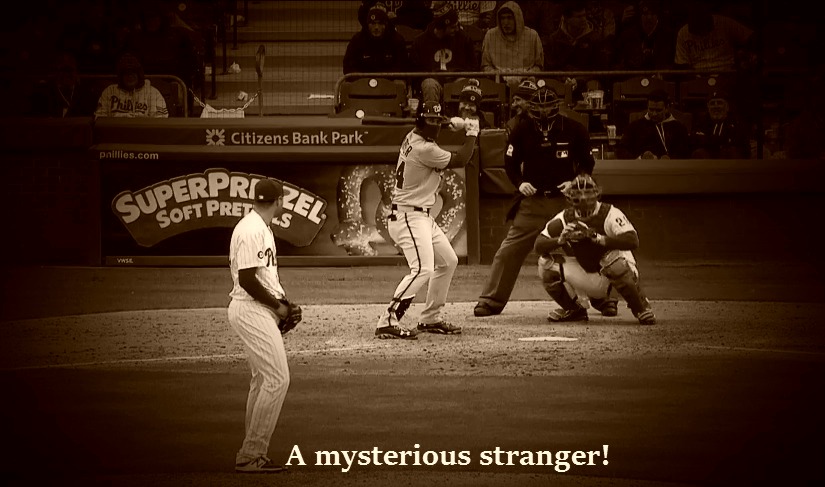 Whose is this shadowed face? It is Harper’s lineup spot, and yet the man is masked. Gomez tests the air with a warning ball, carefully wide. The batter plucks the fabric away from his nose, gathers breath for the next draw. The crowd gasps: Harper!

This time, it is the pitcher who is the victor, but Bryce Harper remains. When the inning comes to an end, he saunters into right field beneath a cloud-shrouded sunset. He thinks, There are two kinds of at-bats, my friend.

You Do Not Know This Man 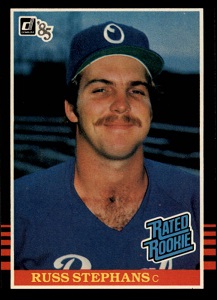 The invention of the Rated Rookie, a phrase at once so evocative and yet so utterly meaningless, heralded both the rise of the eighties and the slow death of childhood: not just ours, but all childhoods in total. That blue italicized logo was literally slapped on a photograph as a work of distilled branding, a call to care about something because the Donruss Trading Card Company asked us to. Largely, we did.

In 1985, however, it was a false promise. Nearly half the 19 Rated Rookies from that set provided sub-replacement value over their career, and many of the rest were long-serving backups. The third-best career of the bunch, for perspective, was the legendary Mike Bielecki. But it’s not as though Donruss made poor choices; of the September callups, the traditional field for the next year’s crop, only Mickey Tettleton could be considered left out, and he needed years to bloom. But these men are not our concern. Our concern lies with Russ Stephans.

Stephans is a rarity for two reasons: First, he is the only ballplayer of the vintage Donruss era to receive a major league card while wearing a minor league uniform. This is because of the second fact: Russ Stephans, alone among Rated Rookies, never played major league baseball.

Stephans did have a Royals jersey with his name on it, for a couple of days. He’s along a class of “phantom” players: men who were called up to the major leagues, donned the jersey, but never appeared in a game. Considered the team’s catcher of the future, he served as emergency catcher for a few days in June, but no emergency arose. A week before his September call-up, he dislocated a shoulder.

And then… it never healed. While his momentary teammates were off winning the World Series in 1985, earning their diamond rings, Stephans toiled in lowly Omaha, always Omaha. Unable to throw, he tried to come back at DH, but his development as a hitter proved stilted. After two seasons of growing desperation, Russ Stephans disappeared. Not only is there nothing left of him, but if not for that single card, he would never have existed at all.

There’s always been an invisible line between a baseball card and a photograph of a stranger. 1985 Donruss card #42 appears to hang over the edge. It is available for a mere quarter from friendly online retailers, and likely will be forever. It serves as a fair token, a symbol of exactly how narrowly one can come to fulfilling one’s dreams while falling totally short. It turns out to be a margin as narrow as the width of a baseball card.

Death of the Home Team

Yesterday, in a fashion that probably had a number of people in the Northwest googling phrases like “when is nfl draft” and “what to expect nfl draft seahawks,” the Seattle Mariners blew a game in the ninth inning. There are mitigating circumstances, as there always are: their closer, Edwin Diaz, was by all available evidence instructed by the umpiring crew that he was no longer allowed to throw strikes; the Mariners were playing the Los Angeles Angels of Anaheim, and as a result had to play against God-Emperor/Shai Hulud hybrid Mike Trout; and, last but not least, the Mariners are never allowed to have nice things. But be all that as it may, the Mariners squandered a six run lead in the bottom of the ninth inning and let the Angels absolutely steal one from them.

Now I know what you’re asking: what has Mitchell Haniger done to deserve all of this pain? Suffice it to say: He knows what he did. But I also know what else you’re asking. You’re asking: “Trev, my personal friend and confidant, why did you phrase the above paragraph to make it seem like the Mariners did something bad instead of phrasing it as if the Angels did something good?” Well, first off, stop undermining me in front of the readers. And second off, good question! Why did I do that, anyway?

The truth of the matter is that, whether or not I was planning to write this column, the format above is what I would unconsciously use to recap the Mariners-Angels game. The Mariners let a lead get away, and the Angels just happened to be there to reap that good fortune; the former did something almost unforgivable from a baseball perspective while the latter just happened to be there in order to profit. On some level, this speaks to the statistical power imbalance in baseball, wherein the pitcher, even if he’s absolutely atrocious, will get hitters out at least 65 to 70 percent of the time. The sheer unlikeliness of seven or eight hitters getting on base in a row makes it seem deeply unlikely that the hitting team has much to do with their own success — instead, we just assume the pitching team gave up their advantage through sheer will to fail.

Instead, I think the negativity surrounding blowouts — that we blame one team as opposed to praising another — comes back to our old friend confirmation bias. In fact I’d be willing to bet that while Angels fans were absolutely losing their mind at their team’s comeback, there were 29 other fans cringing in sympathy (well, that and a bit of schadenfreude). And this is because, even though we’ve all seen our respective clubs blow leads and come back from serious deficits, the lasting emotional impact really only lies with the former. The latter is fleeting, forgotten the next day after the quotidian 3-1 loss. Winning outcomes always fall under this curse: when the team we root for wins, we become acquisitive and grasp for the next high forgetting the one before it. When they lose, we wallow in the feeling and never let the bad feelings ever really go away.

Because baseball is — no matter what anyone tells you — a painful game meant to break your heart. And who wants to drink with a winner anyway? Cheers to the M’s: welcome to the party.