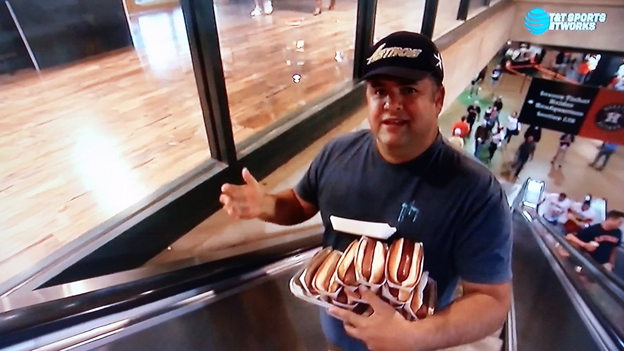 Fans of the Marvel Universe have something new to be excited about—the first set photo from the upcoming Netflix series Hot Dog Man hit the Internet today, and the diehard “dog heads” are already freaking out.

Marvel is already known for serializing the stories of some of their more obscure characters for the online streaming site, but Hot Dog Man might be their most esoteric character to date.

Only the most loyal of Marvel fans might remember the short-lived run of the Hot Dog Man series in the mid-1970s, but his story is projected to be one that blends well with Marvel’s and Netflix’s current run of darker-themed superhero stories.

Hot Dog Man—or Frank Case as his friends and family knew him—was a bit of an antihero of sorts in so much as he never really helped anyone in distress and was constantly on the prowl for his precious hot dogs, the source of his super powers.

As the beginning of the comic series focused mainly on Hot Dog Man’s quests, and the line of comics was unceremoniously cancelled before any real plot arcs could be revealed, only the writers of the comics know what Hot Dog Man’s special powers actually were. Sadly, both the writer and illustrator of Hot Dog Man were killed in two completely separate, yet equally horrific car accidents on May 29th, 1992.

Nevertheless, Hot Dog Man will make his way to the small screen in July with his signature Houston Astros hat and his famed catchphrase “Hey! Mind Your Business!”

It’s Marvel’s most ambitious project yet, but one that guarantees to leave fans hungry for more.

And you may find yourself

In a beautiful house

With a beautiful wife

And you may ask yourself

The White Sox opened their season at Guaranteed Rate Field, née U.S. Cellular Field, née Comiskey Park II (hereby referred to as “Sox Park”), on Monday, a 6-3 defeat at the hands of the division rival Tigers that was never even all that close: in the second inning, Detroit hung a five-spot on AL Cy Young-contender and newly minted Sox ace Jose Quintana. The loss was the proverbial insult to injury, as Opening Day had been postponed at Sox Park on Sunday. Maybe Rick Hahn and Kenny Williams should have found an excuse to delay the christening of their newly named park another day; maybe the estrangement of the new name caused Quintana to briefly forget where he was in the second inning. Maybe.

And you may tell yourself

“This is not my beautiful house!”

And you may tell yourself

“This is not my beautiful wife!”

The formerly rudderless White Sox affixed a propeller to their sinking boat this offseason in the form of two blockbuster trades, netting them a handful of top prospects. Lucas Giolito’s velocity is down, but Tim Anderson inked a long contract that keeps him in Chicago through at least his age-29 season, and Yoan Moncada is waiting in the wings. Carlos Rodon is hurt, but PECOTA likes him as much as Quintana. Tyler Saladino still sports that mustache. Jerry Reinsdorf still hates the union. 75 wins? Not bad.

Into the blue again

After the money’s gone

Once in a lifetime

“The Chicago White Sox game against the Detroit Tigers was postponed Wednesday due to rain” [ABC-7 Chicago]. Insult to injury. Redemption postponed. To employ another idiom: “Idle hands are the devil’s workshop.” The Sox signed Mike Pelfrey on Wednesday.

And you may ask yourself

And you may say to yourself

Avisail Garcia started in right field for the White Sox on Tuesday. Same as it ever was.

Stephen Piscotty Stars In: Man Getting Hit By Baseball

I am a big proponent of the Kimmy Schmidt life philosophy that one can endure anything for 10 seconds; once you’re done with that, you just start in on another 10 seconds. On Tuesday, Stephen Piscotty’s mettle was tested, 10 seconds at a time, all around the bases.

It started with him getting hit on the arm by a Jake Arrieta pitch. 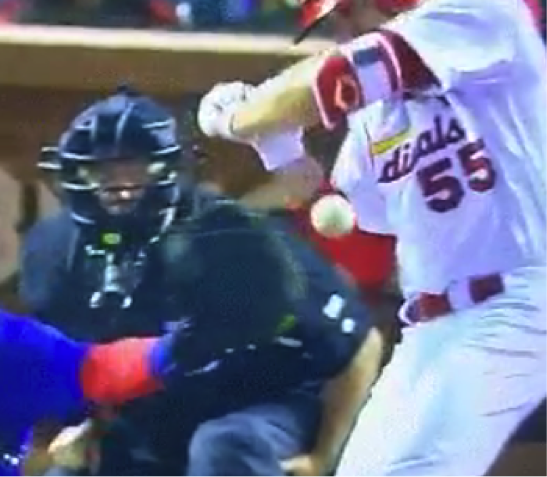 Piscotty watches this ball in like the backlit victim in a British police procedural. “Oh, hello, it’s you again. What do you want, then? I say, what are you doing–” [mufflled beaning sounds]. He tries to twist out of the way, but–just like in any detective show–it’s too late.

Okay, sure. Hit-by-pitch happens. Every batter who steps into the box knows he’s running a risk of getting his tower buzzed, or a little chin music, or whatever other folksy expression we have that minimizes the pure terror of a high-velocity projectile coming straight at your animatronic meat-sack. This isn’t even particularly bad, as HBPs go. Off to first base trots Piscotty, counting down his 10 seconds.

What happens next gets a little weirder. On a wild pitch, Willson Contreras tries to throw out Piscotty as he takes second base. But this baseball had ill intentions, and decided to teach a physics lesson using poor Stephen’s elbow: 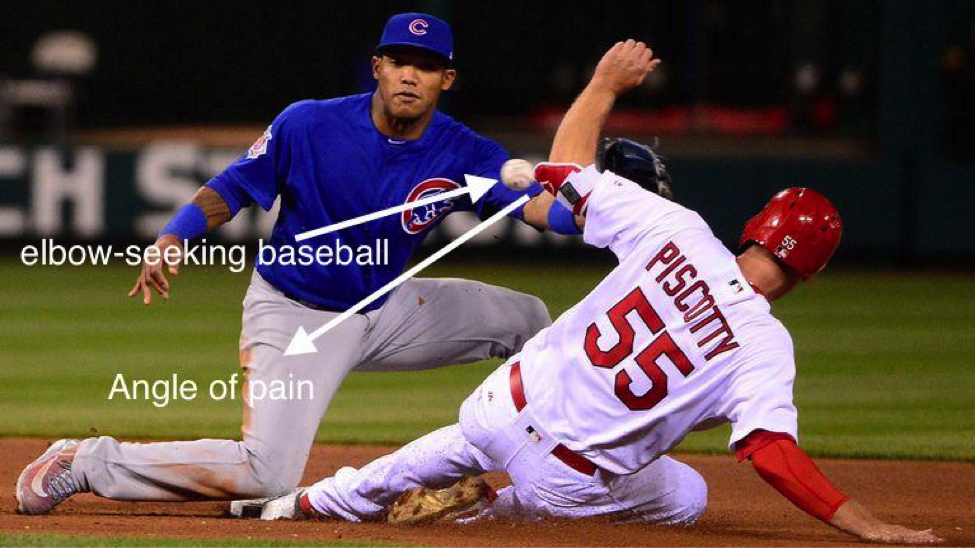 Okay, nail me once, shame on you; nail me twice in the same inning, baseball is weird and that stuff happens sometimes. I’m no great lip reader, but as Piscotty rolls over on impact you can see him mouthing a word, and I think that word is “yikes.” Or it might be “ouch.” Or maybe, “does it please you to oppress me?” It’s one thing to get hit by a pitch and be awarded first base, like you took a baseball to small claims court and actually won something. It’s another thing to get zapped while you’re already on base, just trying to do your job and have a day, and suddenly there’s a baseball banking a shot off your elbow.

But the puckish baseball gods weren’t done yet. On an infield single, Piscotty was breaking for home, trying to score the Cards’ first run, when an errant throw from Javier Baez struck him on the side of the head. In slo-mo: the ball strikes his helmet, popping it up like a misguided whack-a-mole, and Piscotty immediately drops to the ground, rolling over a couple of times before he lands facedown in the dirt. It’s a scary moment, and it’s also the final act in an increasingly insulting succession of events.

I wonder what kinds of things Stephen Piscotty thought, lying there on the ground, what incredulity and shock and horror must have washed over him. And I wonder if later he, like me, laughed: first at the sheer impossibility and absurdity of that chain of events, and finally, laughed to know he’d made it through all those strings of ten seconds after ten seconds, laughed to know how many more he could make it through.