On Sunday, I made my son cry. We live our lives together, but at times very far apart. I am 35, and starting to laugh a little less at jokes about death’s imminence. He is nine, and beginning to leave the world of Legos and superheroes, into one I try to not think too hard about him inheriting.

Sunday night was not special, save that a night camping had left us both lower on sleep than normal. The tone and timing of his complaint, I honestly cannot remember what it was about now, aligned at the perfectly inopportune time and I, a grown man, yelled at a little boy. I yelled at him in a way that had much more to do with things that had nothing to do with him. It had to do with work, and age, and frustration, and adulthood. I chose him to yell at because he was there. He wept, and then, immediately realizing my own small meanness, so did I.

When you have children you imagine them as empty vessels. You imagine distilling the filth and grime that life leaves on your old soul, and filtering only the best, purest, highest parts of yourself down into this child, this being you have created. For whatever reason, though he is like me in so many way, including many I wish he was not, my son’s love for baseball remains largely dormant.

Sunday night was not special, save that it was Opening Day, and it closed with the defending World Series champion Cubs in St. Louis to play the Cardinals. My son and I talked through our issues. I apologized. We dried our tears. We made it to the couch by the eighth inning. Normally he would have bounced around the room, reading a book, asking science questions, learning about animals. But Sunday night, in our emotional and physical exhaustion, we just sat in silence.

We watched Randal Grichuk hit a home run through the rain. We watched Willson Contreras hit a two-strike, three-run home run in the ninth. We watched Grichuk win the game with a walk-off single. My son broke the silence, wanting to know why, even though the bases were loaded before Grichuk’s double, only one run scored. We talked about it. We talked about the milliseconds a batter has to react to a pitch. We talked about baserunning, and the efficiency of route-running. We talked baseball. At the end my son was quiet for a moment and said, “I’m glad baseball is back.”

Sunday night was not special, save that there was baseball, and I watched it with my son. A quiet, still 40 minutes, the night’s screams forgotten, and tomorrow’s trials kept at bay. There’s a game today, too. And one tomorrow.

[A dimly lit closet originally designated to serve as a boiler room is being repurposed as a conference room for the Braves' public relations staff, due to a burst pipe in the original location]

LANCE: I hate it here. I’ve lost all motivation for this work and belief in this organization, I spend every day sabotaging projects with the hope that it will both get me fired and provide the catharsis my life otherwise lacks. On the way here I unplugged one of the vending machines.

KAREN: Right, so we just want to hold a simple presser to debut some of the features of the park. Ideally low key so we just draw freelancers to phone it in and not be scrutinizing.

DAVE: Well, Lance prepared an agenda, let’s give it a look!

LANCE: The agenda is a prepared list of the social security numbers of top Liberty Media executives. I have been calling local high schools and reading them aloud.

KAREN: [Gritting teeth momentarily] We need a positive story, highlighting the strengths of the ballpark. Research shows our audience is preoccupied with how the park was funded, the legal fight over property owners’ ability to sell parking spots near the stadium, and, surprisingly to this day, the Mark Teixeira trade.

LANCE: I spliced the audio of some comments Dansby Swanson made about two-strike approach to make it sound like an endorsement of the Armenian genocide, and leaked it to WSB-TV. They were going to air it in their C-block, but it got bumped for coverage of the I-85 collapse …

KAREN: People are mad about their team leaving for the suburbs, they’re anxious about traffic, they feel dirty about supporting an organization they have grown to distrust. We can’t counter these sentiments overnight, we need to assure them it’s a nice park with all the perks of a new stadium and the Braves baseball product they have traditionally loved.

LANCE: Let’s hire a celebrity to run the press conference and just run them out there unprepared.

KAREN: Dave is the team spokesperson.

DAVE: But I love celebrities!

KAREN: The Q score of a local star would offset the incoherence. Donald Glover, Outkast, even Migos if we had a long enough delay on the live feed …

KAREN: I think he’s from Virginia.

DAVE: Close enough for me!

LANCE: We pay him to just tell him to get mad and yell.

KAREN: We’ve had enough bad PR that we can play it as humor.

LANCE: There is no escape from here, is there?

What Zack Greinke Thought While Madison Bumgarner Rounded the Bases 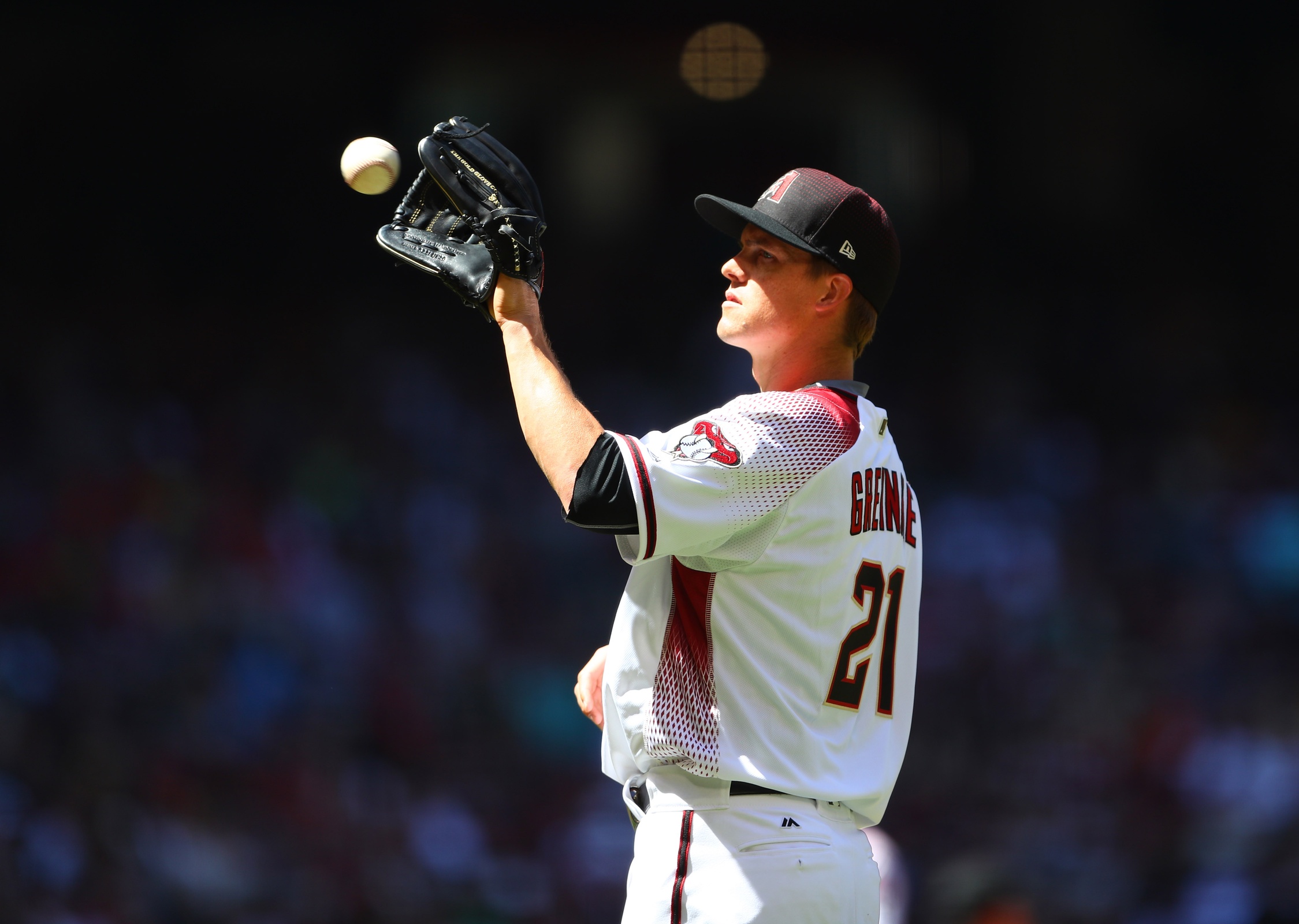 This, all this out here, is what the end feels like, but the problem is you can't tell if it's the end of the day's order or the end of it all. Any curve looks straight if you zoom in enough. Maybe it doesn't matter, though. Life isn't math, regrettably. Should I change my behavior depending on whether this is a local end or a global one? Human misery is sure to result either way, and I have a moral duty to help alleviate suffering, whether it's ultimately futile or not, because long-run meaningless pain is still pain, and still real. And as far as that goes, "the long run" itself is pretty slippery. In the long run, we're all dead, and the earth has rotted and spun out, and the sun has faded to gray, and the universe has recollapsed to a single point, so this whole end of order/end of it all, short run/long run, meaningful/meaningless distinction is itself meaningless, which of course means that it's also meaningful, unless the actual point of the distinction being meaningless isn't that both are true, but that neither is true, because nothing is true. Or maybe everything and nothing are true simultaneously, and not for the cheap reason of a lack of universal truth but precisely because of universal truth, because the universe is, for now, we hope, expanding such that things that were not true a microsecond ago are now true in the larger universe, because it has grown to encompass that truth. But what would that mean for the eventual reversal, the shrinkage? Does truth fail? Can truth fail to the point where reason fails? How could we recognize it if it did? Isn't it inherent in the failure of truth and reason that we'd be unable to tell what we lost? But how would that inability manifest? Would we even have doubts? Is the presence of doubt about the absence of reason itself proof that reason is not lost? Or is that the usual aggrandizement to avoid despair?

Span's up. He's never done anything with hard stuff up in the zone.

You need to be logged in to comment. Login or Subscribe
mattsussman
I never noticed Bumgarner runs that slow
Reply to mattsussman
LlarryA
I miss Larry Granillo's Tater Trot analysis.
Reply to LlarryA
BleedingBlue88
These are great guys. Short relief has become one of my favorite features on BP--good writing, interesting stories, humor... love it. And these 3 in particular were very good.
Reply to BleedingBlue88
BleedingBlue88
Also: Greinke must've faced a serious existential crisis after realizing that, while his years in the league have allowed him time to solve Span intellectually, now, at age 32, those same years have left him physically incapable of executing the solution since, at this stage in his career, nothing he can throw might qualify as "hard stuff."
Reply to BleedingBlue88
rwmiller98
Unique content like this is what makes BP worth the annual subscription. Thanks for thoughtful and entertaining articles as well as great baseball insight.
Reply to rwmiller98
jfranco77
Some dust got into my eye when I was reading Nathan's piece. Quite a large piece actually.
Reply to jfranco77