The revelatory figure responsible for changing at least one player’s career first appeared in early August, 2015. It showed itself to an unsuspecting and inconspicuous soul—don’t they all?—who knew himself in concrete terms. Having accepted both the immense gifts that allowed him to ply his lucrative trade, and the limitations that grounded him on a certain level of it, this Daniel Murphy fellow was to be the protagonist of our tale, even if there was no way he could have known it at the time.

The first shock, of course, was seeing the translucent image of himself emerge from his equipment bag (on a decidedly upward trajectory). But, lacking the wherewithal to question this presumed hallucination about its nature and origin, the shock that Murphy remarked upon was its familiar but incongruous wardrobe.

The erstwhile Mets second baseman was unaware of even subconscious goings on that would have triggered this particular effect.

“Don’t mind that,” the figure said, its face stoic and still. “I’m a star, an MVP candidate. Can you believe that? Anyway, what I can to tell you is, yes, keep trying to hit the ball as hard as you can. But maybe also think about elevating it. Look for pitches you can get up over the infielders, into the air. You could be a power hitter, too, you know.”

The opaque, corporeal Murphy smiled, flattered by the optimism, but felt his head shaking itself. It wasn’t the first time he’d heard this. His hitting coach, Kevin Long, had said things to this effect. Curtis Granderson was a devotee of the approach, too.

“Power hitter? I mean—I could, maybe. Yeah,” he whispered to the figure, hesitating at the thought of Granderson’s homers, then remembering his frequent strolls from the plate to the dugout. “But I’ve got a job because I hit .300. That’s what got me here. I can’t start swinging for the fences and striking out a bunch. That’s not what I do.”

“Maybe you can do something better,” the translucent Murphy said. “Just think about it.”

Understandably, Murphy kept his recollections of the helpful spirit to himself. He didn’t exactly forget about it, but kept it out of mind until it reappeared in the spring of 2017, this time hovering over his Nationals teammate Ryan Zimmerman, eyebrows raised.

Still somewhat spooked by the chain of events that had fulfilled the translucent figure’s vague promise, he nonetheless acknowledged the power of its advice.

He swung for power more often, but with a better understanding of which pitches he wanted to attack and drive, and in which counts. His spray charts became GIFs exemplifying optimal hitting adjustments, backed up by exit velocity and launch angle data coming in from Statcast. He became deeply interested in the details of his new strategy.

And Murphy's disappointing and injury-interrupted season—which would go so far toward determining his future financial situation—morphed into a record-breaking postseason power spree, a moment in the sun he couldn’t have dreamed up.

When he ended up in Washington (presumably after translucent figures dissuaded Ben Zobrist and Brandon Phillips from joining the Nationals), Murphy was itching to see if the advice could have similar effects for other players. He found mostly deaf ears. His teammates charged along with the tactics that got them there—as he had once done. He found a new gear in new forms of data, yes, but also in drills and strategies he had known about all along, but simply passed off. They weren’t really his thing, he thought.

In the Nationals' clubhouse, they were only his thing, this approach and the ways he kept it fine-tuned.

“I think Murph’s crazy with that,” Bryce Harper told Mark DeRosa, with a smile, when asked if he bought into the exit velocities and launch angles and the like. “I know he’s going to look at it, and everyone in the clubhouse thinks he’s nuts. But it works for Murph. And if it works for Murph and he understands it, then that’s good with me.”

So when he glimpsed the translucent figure over by Zim’s locker, Murphy shook it off. He did decide to look at Zimmerman’s numbers and video, though. He saw something, something in his exit velocity and a real something in his launch angles. 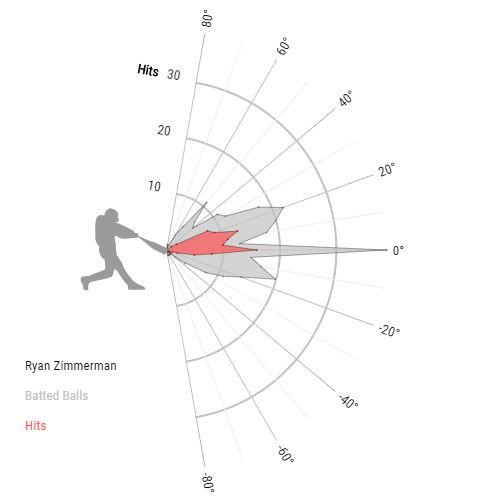 Asking a major leaguer to unfold the delicate paper airplane of his livelihood—to reconstruct it with only the hope that it might fly higher, farther—is a difficult proposition usually turned down. Murphy knew this. He knew that he wasn’t truly open to the idea until that August, with free agency looming and a horrific few months of hitting sitting as his most recent record of results.

Zimmerman was, in most ways, a poor candidate for such an intervention. His career was conventionally good. Prospect sheen turned into franchise player status and veteran omnipresence. But the fact that his decline was taking a steeper path than expected—perhaps steeper than necessary—made Murphy think it worth a shot.

Zimmerman’s 93.7 mph average exit velocity had ranked ninth among hitters with 200-plus batted balls in 2016. His problem, instead, was a suboptimal launch angle profile. He too often hit the ball into the ground or so low that infielders could pick it. Solutions, even to clear problems, are never simple, but Murphy felt confident that some of his adjustments would translate well.

He made his case. In Zimmerman’s eyes, Murphy could see that mix of interest and glaze, the disconnect triggered by unfamiliarity and doubt and the mixing of his voice with hitting coach Rick Schu’s and Harper’s and some Hampton Roads area instructor from Zimmerman’s childhood. Maybe he’d heard all of this before. Maybe it was totally new. Murphy wasn’t sure which, or whether it mattered.

The figure dispensed with the subtlety that last time Murphy saw it. When position players reported to camp for the 2018 edition of spring training, it escorted new free agent signee Eric Hosmer into the Nationals' facility, translucent arm around his broad shoulders, a smirk challenging Murphy to act. Murphy already knew the deal with Hosmer. The face of the World Series-winning Royals excelled at playing every day and ended up producing solid counting stats because of it. But like Zimmerman, a good chunk of his hard contact was being wasted. Hosmer posted extraordinarily high ground-ball rates for a long, sturdy first baseman.

This wasn’t Kelly Johnson, or castoff J.D. Martinez, or flailing minor leaguer Josh Donaldson. Hosmer didn’t need to be a different hitter to avoid Triple-A bus rides, or the prospect of life after baseball. How could he convince a player like this—obviously wanted, to the tune of tens of millions of dollars—to visualize and chase a better version of himself? Should he attempt to explain how he had changed course, beyond the technical stuff?

No, maybe instead of spooking him, it was simply a matter of setting an example. More players were crowding around Murphy’s video sessions, listening in when he picked the brains of coaches and front office folks. His success was years old, at this point. He was the figure. Other players saw his career—stowed it away in the back of their minds as a guide to follow if their powers of self-visualization ever failed them or produced less-than-stellar imaginings of the future. The best thing he could do was hit, and wait.

He wished it could happen differently. He optimistically thought it might at some point, if coaches became less crusty, or if players were encouraged to give more voices a chance earlier in their careers. When Hosmer was ready, he would ask. Maybe he would start wondering why he didn’t get the contract he’d hoped for, why teams didn’t see him as the star he was to bar-goers in Kansas City. Maybe he would start to question his own view of himself. Maybe he’d simply see the tantalizing shape of his potential, and reach for that unfamiliar something that could make it real.

You need to be logged in to comment. Login or Subscribe
MikePemulis
It's a little ironic that it's Zim's 'clubhouse presence' and old-school manager that keeps him in the lineup and not the fact that there are underlying statcast indicators that he may still be able to hit a baseball right.

Dude needs to stop hating on SABR.
Reply to MikePemulis
oldbopper
I know baseball dugouts are not populated by a very large percentage of people with college degrees but it is surprising that it took this long to realize that hitting ground balls is definitely not the way to success. The SLG was below .300 on this type of contact last year or, aptly stated by the Pirates, "The OPS is in the Air."
Reply to oldbopper