Note: This article, and the one that preceded it this week, is based on a presentation I made at the Society for American Baseball Research Analytics Conference in Phoenix this month. You can hear the audio here, and follow along with the slides here, should you desire. Fortunately, there is no video.

Part Two: The Legacy of the Modern Bullpen

In Monday’s article, I discussed the “modern bullpen,” whose genesis dates back to Tony La Russa using Dennis Eckersley in one-inning save situations for the 1988 A’s. As one-inning saves proliferated (from 30 percent of all saves in 1988 to 83 percent last season), one-inning roles for other relievers grew. In 1988, 26 percent of all relief appearances lasted exactly one inning; that proportion was 51 percent last season. This, in turn, led to increasingly dominant bullpens, as the spread between starting pitcher and relief pitcher performance grew, imperiling late-inning comebacks: 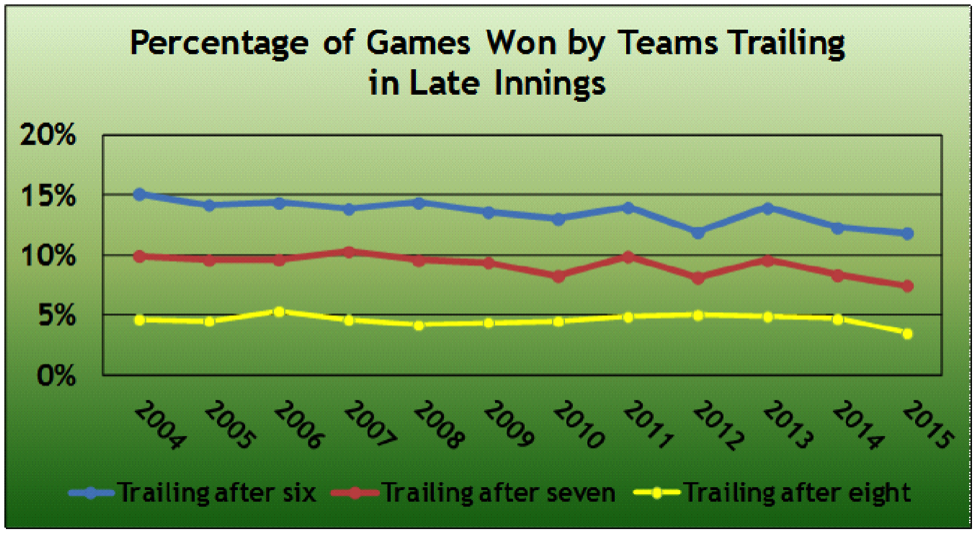 Last April, Russell A. Carleton argued that a lower run environment was creating more opportunities for late-inning comebacks, and comebacks were therefore not endangered.

Carleton was right. As I pointed out last October, here’s what happened in 2016: 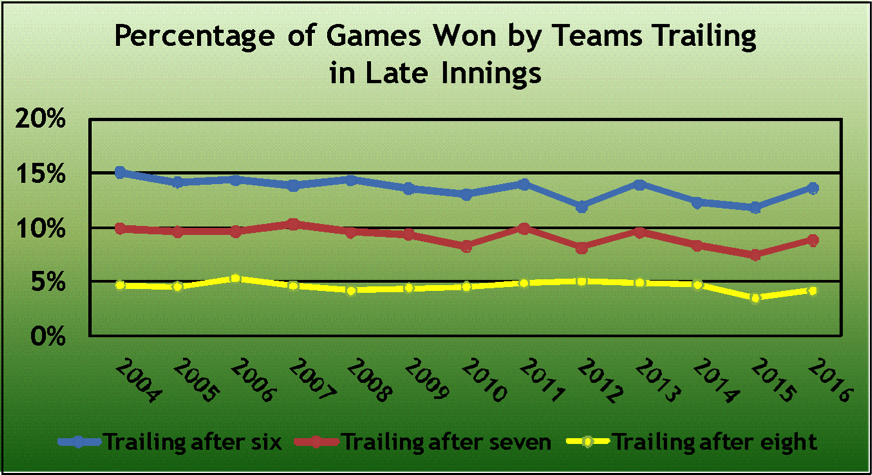 Comebacks after six innings and after seven innings were at their highest level since 2013, and comebacks after eight innings, while still suppressed, rebounded as well.

Further, taken in the over the full arc of the modern bullpen era, beginning in 1988, the overall downward trend vanishes: 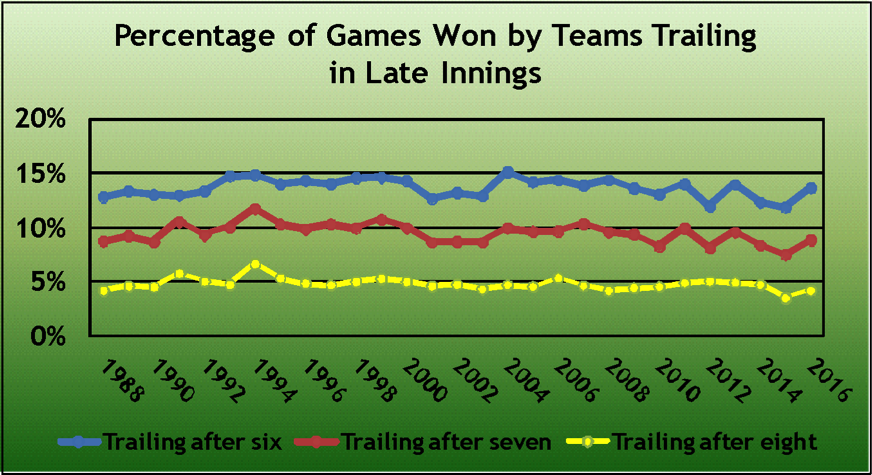 Note that comebacks after six, seven, and eight innings were more frequent in 2016 than they were 1988, the year viewed as the beginning of the modern bullpen era. That’s not suggestive that the proliferation of one-inning relievers has squelched late-inning comebacks.

As an aside, two teams in 2016 were noted for their late-inning play, one for its heroics (Rangers), one for its struggles Giants). Those two teams are not the sole reason for the change noted above: 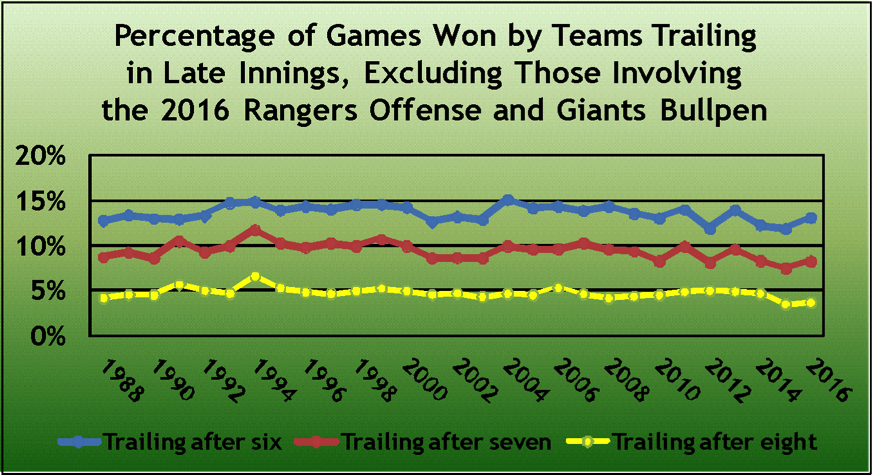 This analysis should at least temporarily allay concern about the trends of the past few seasons, but it does not address the overall effect of the modern bullpen on comebacks since its inception. To analyze that, I considered all 71 seasons since World War II. In the graph below, the solid black line indicates 1988. 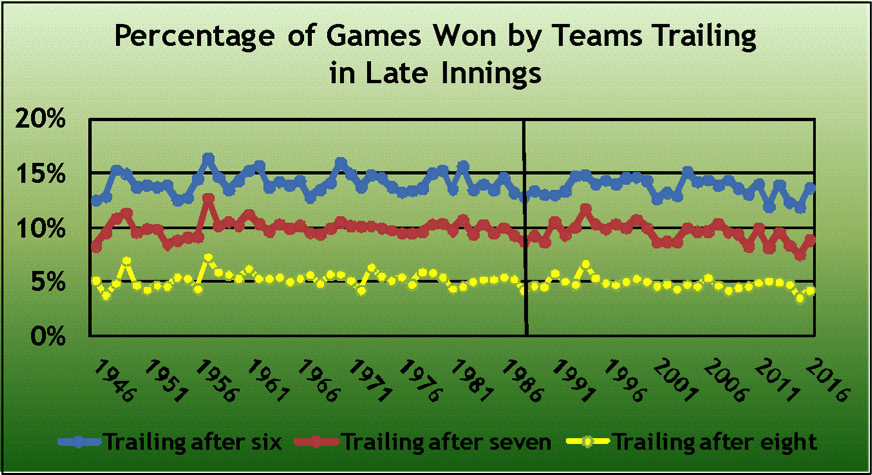 Overall, late-inning comebacks are down a little in the modern bullpen era. From 1946 to 1987, 13.6 percent of teams trailing after six innings came back to win. That figure’s fallen to 12.7 percent in 1988-2016. That’s the case for teams trailing after seven (9.4 percent came back before 1988, 8.5 percent since) and eight (4.8 percent and 4.5 percent) as well. But the falloff has been minimal, and it doesn’t appear to be attributable to 1988. Comebacks didn’t fall off a table that year, nor have they been in a steady decline in the years since. The difference, rather, can be traced to the way the modern bullpen has increased the influence of the run environment on comebacks. 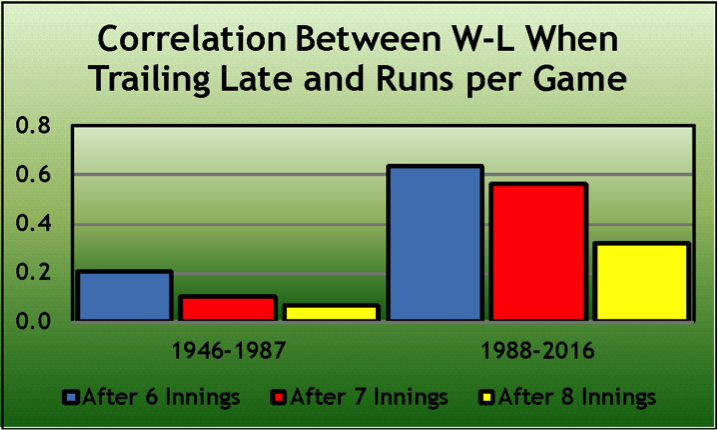 So far I’ve focused on the leagues in aggregate, with the conclusion that the modern bullpen has not had a meaningful overall effect on comebacks. But individual teams may not follow that pattern. Bullpens with more talented pitchers who are better deployed may have an edge over others, and that edge may be growing. For this analysis, instead of looking at teams coming back from deficits, I’ll look at teams preserving leads. The key metric will be winning percentage after establishing a late-inning lead.

Here are the teams with the best and worst winning percentages in games that they led after six, seven, and eight innings in 2016:

If some teams are deriving a disproportionate benefit from the construction and deployment of their relievers, the difference should be rising with time, particularly in recent years, as the one-inning middle reliever has become more common. This graph displays the difference in the top three and bottom three winning percentages for teams leading after six innings for the years 1950-2016: 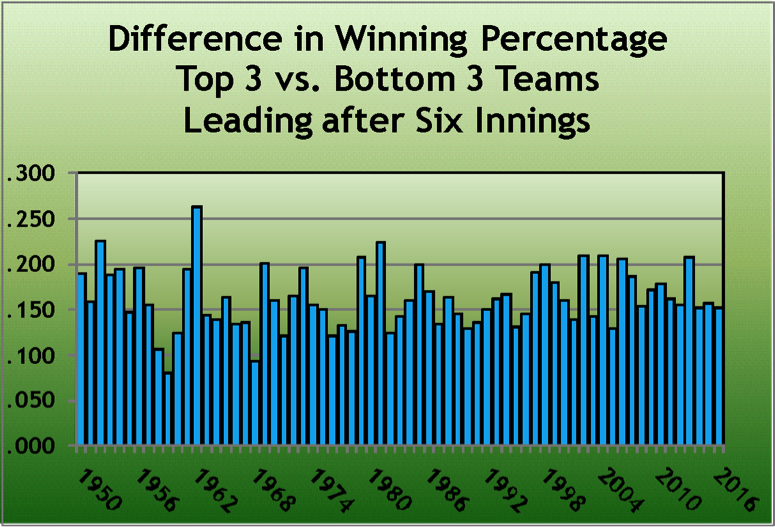 There is no discernible change. The average difference in winning percentage in the pre-modern bullpen years of 1946-1987 is .160. Since 1988, the difference has widened only to .165. Yes, the teams with better bullpens have an edge, but that edge translates into one excess win for every 200 games with a lead heading into the seventh inning.

The same is true of teams leading after seven innings: 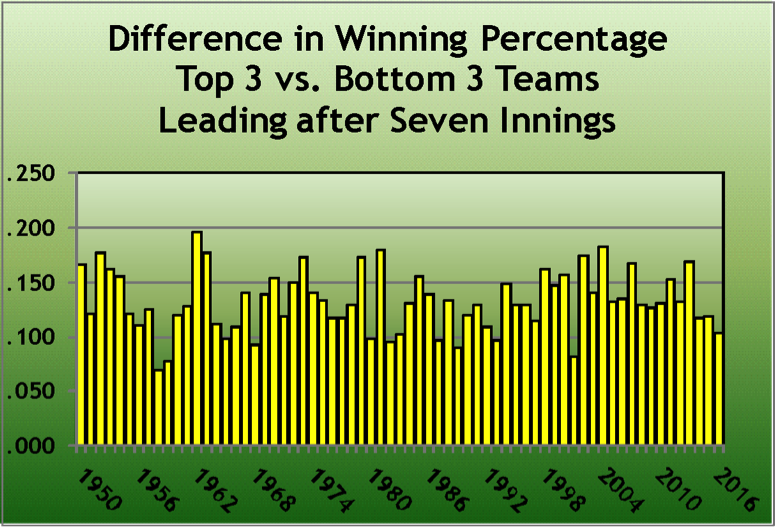 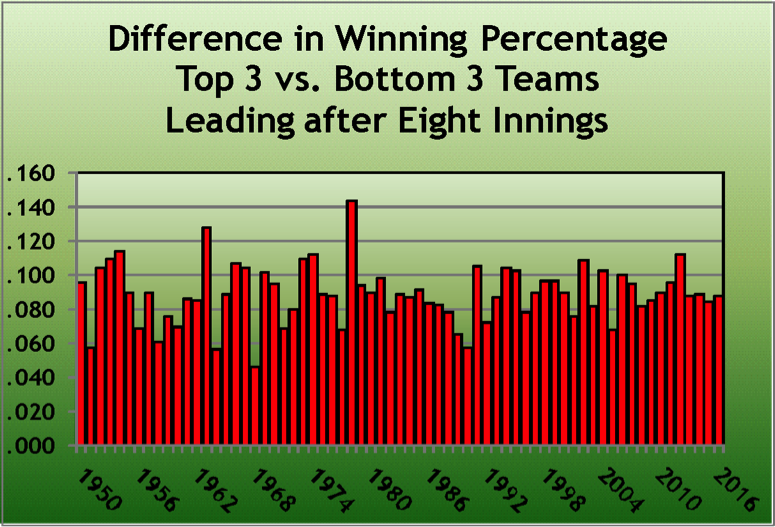 This indicates that the deployment of one-inning relief specialists has not materially widened the gap between the best and worst bullpens in baseball. In statistical terms, neither the overall mean of frequency of late-inning comebacks nor the standard deviation of individual teams’ ability to protect late-inning leads has changed significantly.

This analysis would seem to suggest that the modern bullpen is an exercise in tire-spinning. The development of shorter starters’ outings, combined with a succession of one-inning relievers, has not reduced the frequency of late-inning comebacks. Additionally, teams have been unable to adopt bullpen strategies that have given them a competitive advantage over the remainder of the league. So why bother?

There are three responses to this question. First, as Carleton illustrated, comeback opportunities increased in recent years as scoring declined. The largely static number of comebacks indicates that relievers are successfully suppressing a larger proportion of potential comebacks than in at least the recent past. There were 105 ninth-inning comebacks in 2013, when 64 percent of games entered the final frame with teams separated by three or fewer runs, compared to an almost identical 109 in 2000, when 58 percent of games were similarly close at the end.

Second, the modern bullpen has created predictable efficiencies. As discussed earlier, the scoring environment plays a much larger role in fueling comebacks than it did in the past. Given that, the run-suppressing ability of bullpens has risen in prominence. Having a deep and strong bullpen is crucial in an environment in which overall run-scoring is an increasingly important driver of late-inning performance.

The data in these reports relied heavily on Rob McQuown and the Baseball Reference Play Index.

You need to be logged in to comment. Login or Subscribe
kvamlnk
"""
Since 1988, the difference has widened only to .165. Yes, the teams with better bullpens have an edge, but that edge translates into one excess win for every 200 games with a lead heading into the seventh inning.
"""

I just don't understand the arithmetic in those sentences. Why not 33 wins every 200 games?
Reply to kvamlnk
mainsr
Ah, I see your point. Poor wording on my part. What I was trying to say is that from the pre-modern bullpen 1946-1987 era to the modern bullpen 1988-2016 era, the difference between the best and worst bullpens has equated to just one extra win per 200 games:

You are, of course, correct that a difference of .165 equals 33 extra wins per 200 games, when comparing the best to the worst. I was comparing best/worst for the two different periods in reaching my conclusion that the implementation of the modern bullpen has not conferred a sustainable advantage to the best implementers of the strategy.
Reply to mainsr
kvamlnk
I should have read more carefully.Thanks for explaining.