Veeck as in Spring Training

Baseball can be embarrassing. For instance, when legendary hype man Bill Veeck (as in “wreck”) comes up in conversation amongst fans, he’s usually with at least a little bit of contemporary caution. After all, there’s a lot to be trepidatious about when it comes to baseball’s early barkers, since labor laws, general decency, and (in the case of Veeck), the moral and ethical valences of hiring a little person just to fill an at-bat have changed quite a bit.

Baseball, we so often fail to remember as fans, was in its early days a kissing cousin to traveling pro wrestling shows: gimmick after gimmick was used to bring in audiences, keep them in seats, and build brand loyalty. And so, while the spectacle of the game may have become untoward and unserious in today’s MLB climate, it has an important foundational role in the game we love and should be memorialized appropriately — there, column done! 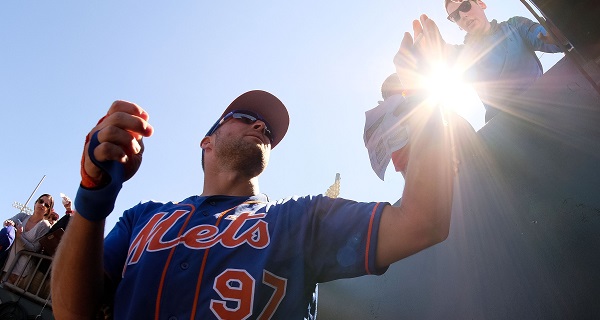 Ah, well, hang on: I forgot to mention Spring Training. Because while we have to avoid eye-contact and ramble on about “the dead ball era” in order to properly explain why someone would schedule a “Barnstorming” tour over the summer or allow fans to vote on in-game managerial decisions, we still have our own silly season in which hopes, prayers, shots in the dark, and, yes, gimmicks reign supreme.

The quality of the game in-season takes on its feeling of seriousness only in relation to the freewheeling, often overly casual quality of Spring Training. While a 25-man roster spot in May is clearly a valuable and meaningful commodity, we struggle to read the tea leaves of any given split-squad roster move. Do the Mets actually think Tim Tebow is ever going to hit consistently (probably not, but maybe) or are they just running him out to sell shirseys while the results don’t even matter in the minor-league-championship sense (probably, but also maybe not just that).

More confusingly, are teams like the Philadelphia Phillies bringing in intriguing prospects — as the aforementioned Fightins have in the form of switch-pitching Pat Venditte — because they want to see if they can pitch or because they want to infuse some false verve into an otherwise dull Spring Training? On one hand, one can look at Venditte’s minor league success and squint a bit to see a viable bullpen arm on the cheap, so no harm in bringing him into camp. On the other hand — haha the other hand — Venditte hasn’t been much more than a mid-four-ERA footnote in the majors, and if he weren’t a pitching anomaly, he might not get a second look. In a game where performance is literally the gold standard of the sport, could novelty really push a team to make a player transaction?

It’s more than possible when the games don’t count. Every team that brings in the washed-up prospect of old or the novelty player on a non-roster invite counts on the fan interest that signing brings in. When journalists spill ink over x player “forcing a tough roster decision,” teams smile whether it’s true or not, because they’ve livened up the unequivocally most boring part of the active league year. I just want to add that, outside of perhaps getting some poor sap’s hopes up, there’s no moral conundrum in doing so. Just like Veeck grifted, improvised, and took risks in the interest of building a stronger bond between the earlier MLB and its audience, so too do contemporary teams build the squishy bonds of fandom through these early days of sideshow minor league contracts and announcer un-retirements.

What should you take from this? One piece of advice that will unlock the world for you: learn to stop worrying and love Tim Tebow. He’s a social construct, sure. But there have always been social constructs. And this one can’t hurt you when the games start to matter.

When asked whether he was upset about opting out of the World Baseball Classic, Mets ace Noah Syndergaard stated, “I’m a Met. And ain’t nobody made it to the Hall of Fame or win a World Series playing in the WBC.” The nexus of the baseball world is Cooperstown; it was his dream to be a major league ballplayer, and he’s the ace of a staff in spring training. Those are the kind of platitudes you hear.

It’s this conflict, the conflict between responsibilities as a major leaguer and as a member of a larger baseball community, that composes a fair chunk of American coverage of the WBC. Steven Wine at the Associated Press described worrying about injuries “a WBC tradition,” summed up by Blue Jays manager John Gibbons’ comment that "I think most coaches and managers rather not have guys go, but it has been good for baseball." Most of the game’s big stars, like Clayton Kershaw and Mike Trout, choose not to participate.

It’s slightly unfair for the American baseball community to claim some superiority over other incarnations of the sport, especially considering the stakes for other international teams, some who need to be seen by scouts abroad. It’s even more stark the contrast in coverage when you see rabid international fans, like Zack Raab of Israel who flew around the world to see his team, or Chinese Taipei drummers who formed a band to root on their club. We in the United States may shrug, but it’s a big deal for many others. And while it may be true that WBC popularity is on the rise, it pales in comparison to a country like Japan, where a quarter of households watched last Sunday’s game against the Netherlands.

We’ve entered an odd phase in international baseball, almost akin to how Western foreign policy works in a neocolonialist manner to obfuscate the gears of subjugation. It begins with ostracizing–before Asian, Latin, and African-American players. Then we see inclusion and even acceptance, despite appropriation and selectiveness with how ballplayers earn admission. We will select you and sign you and pluck you from your country to see you in our country, with our teams, but we don’t really care if you’re playing internationally. We feel entitled to seeing Shohei Otani stateside, but we’ll tune out until then.

Enjoying the WBC is putting in context how we may feel this is a distraction to the main course, but also understanding that this is the main course for fans around the world. David Foster Wallace once said the key to being a better person is pushing back on the tendency that everyone else is an obstacle, that “everyone else in the supermarket's checkout line is just as bored and frustrated as I am.” It may be exhibition baseball for us, but not everyone in the world sees baseball the same way. That’s why, in a way, the WBC exists in the first place.

On March 7, as Team Canada and the Toronto Blue Jays met for an exhibition tune-up, the announcing crew interviewed Larry Walker, first base coach for Team Canada. The conversation turned quickly to Walker’s unconventional start in baseball: a bittersweet accident in which an unsuccessful young hockey player turned to baseball to pass the time. Perhaps in an effort to re-center baseball, Walker was asked about his favorite player as a kid, the one he grew up wanting to be like.

The declaration of Mike Bossy as a favorite is curious. Walker’s own position was goalie; Bossy was a right wing and a prolific scorer—a natural enemy of goalies. Though baseball has no goalies, baseball has pitchers, who serve a function similar to goalies: preventing the other team from scoring. Larry Walker was very much a natural enemy of pitchers, single-handedly driving 383 of their precious baseballs from the field of play. Larry Walker played right field. Larry Walker is the baseball gods’ favorite hockey player (and the baseball gods are pretty sure Larry Walker should have been a forward). 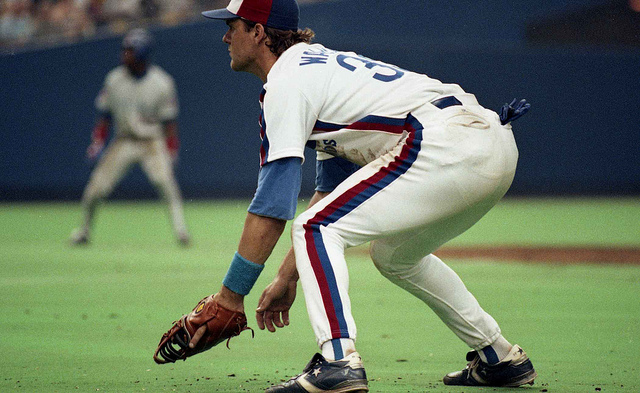 Rookie Walker, ready to drop into the butterfly, if needed.

Both the hockey and baseball deities wanted to be sure the young Canadian was in good company. This is why, certainly, the Quebec Nordiques were relocated to Denver to become the Colorado Avalanche in 1995—the same year Larry Walker himself vacated La Belle Province for the Mile-High City. Then, during one return to Montreal in 1997, Walker was given a Bossy-worthy welcome: his first hat trick. In the top of the seventh with the Rockies up 14-1, when Walker crushed his third dinger of the game into the right field seats, there rained les chapeaux.

It would be one of three hatties netted—er, swatted—by the trebly superstitious Walker.

With fitting symmetry, Mike Bossy displayed some baseball affinity of his own. When Walker was fourteen, still hoping toward his own hockey future but actually a mere two years away from deciding to trade his blocker for a bat, Mike Bossy scored the most iconic goal of his career in a fashion at least a bit baseball-esque:

Both Bossy and the puck are airborne at the moment of contact, but stick catches puck in a hooking backhand, an alchemic showcase of luck, skill, and physics that turned Vancouver’s one real chance to take a game in the series into just another late, sad night in the Nassau Coliseum. It was a swing for one kind of fence, albeit a little turned around.

Bossy went on to win the Conn Smythe trophy as MVP of the playoffs, but all of this happened in the same season some guy named Wayne Gretzky scored 92 goals and a frankly insane 212 points. The year Larry Walker won NL MVP—1997—with 49 home runs was also the year Ken Griffey, Jr. won the AL MVP with 56, and a year removed from the McGwire/Sosa home run arms race. Where Mike Bossy went on to be enshrined in the Hockey Hall of Fame, his name engraved four times on Lord Stanley’s Cup despite a career shortened by injury, there are no World Series rings for Larry Walker’s fingers. With only three years remaining on the ballot, Walker’s Hall of Fame hopes appear tenuous, but he endures as baseball’s favorite hockey player.

(EDITOR’S NOTE: At the time of publication, Tom Glavine could not be reached for comment.)