Michael Brantley was one of baseball’s best all-around outfielders in 2014 and 2015, hitting a combined .319/.382/.494 with 35 homers, an MLB-high 90 doubles, 38 steals, and more walks (112) than strikeouts (107) in 293 games. He easily led Indians position players in WARP during that two-year span and placed third in the AL MVP voting in 2014. And then he missed nearly the entire 2016 season following offseason shoulder surgery, appearing in just 11 games and seeing zero action after mid-May.

Losing a player of Brantley’s caliber would be a huge blow to any team, but the Indians fared remarkably well replacing him. Cleveland’s left fielders—a group of eight led by Jose Ramirez and Rajai Davis early and Brandon Guyer and Coco Crisp late—hit .286/.350/.437 with 14 homers, 41 doubles, 24 steals, and a 97/52 K/BB ratio for an overall line that would plausibly fit as a season straight out of Brantley’s career. Cleveland went 88-63 without Brantley in the lineup during the regular season and then went 10-4 in the playoffs.

It’s hard to know what to expect from Brantley this season, because he was never supposed to miss that much time last year and appeared to be on the verge of returning at several points before setbacks derailed him. Since arriving at spring training he’s advanced from hitting off a tee to hitting against teammates in simulated games. MLB.com has video of some swings from earlier this week, plus some mostly optimistic quotes from Brantley about his progress:

Terry Francona was similarly optimistic, but the manager also noted that he’s trying to remain somewhat cautious because “we don't want to just get him back, we want to keep him back.” Cleveland saw just how important depth was in replacing Brantley last season and re-signed Guyer to serve as a fallback option if things go wrong again. Abraham Almonte and Austin Jackson are also around as veteran options to fill in for Brantley if needed, and prospect Bradley Zimmer looms if a longer-term replacement is required.

Of course, no matter how well-equipped the Indians are to play without Brantley again none of the fill-ins compare to his healthy return. After a lost year PECOTA projects Brantley for just 495 plate appearances in 2017, but has him hitting .301/.360/.455 with 2.2 WARP. PECOTA also projects Cleveland for the AL’s second-best record, one game behind Houston and dozen games better than any other AL Central team. They’ve shown they can thrive without Brantley, but they could be really special with him back in the mix.

All of which is eerily similar to the story in Chicago with Kyle Schwarber, who returns to the Cubs’ lineup after missing all but two regular season games last year with a knee injury. It’s safe to say that the Cubs did just fine without Schwarber, winning 103 games and their first World Series since 1908, but there’s a lot of excitement in Chicago about re-adding his left-handed slugging and plate discipline to a lineup that scored the second-most runs in the league.

Schwarber surprised everyone by making it back in time for the World Series, helping the Cubs beat the Brantley-less Indians in a seven-game classic, so there’s far less uncertainty surrounding his health going into 2017. This time last season Schwarber was on the fast track to stardom following an excellent rookie campaign and PECOTA has him picking up right where he left off, hitting .248/.346/.477 with 31 homers in 597 plate appearances. It’s even sounding like he may replace Dexter Fowler in the leadoff spot.

Brantley and Schwarber returning to full health would qualify as the rich getting richer, but there’s a third star outfielder trying to make an injury comeback under much different circumstances in Arizona. A.J. Pollock had a breakout 2015 season for the Diamondbacks, hitting .315/.367/.498 with 20 homers, 39 doubles, 39 steals, and a Gold Glove award in center field, racking up 5.2 WARP. And then late last spring Pollock broke his elbow sliding into the plate, returning in August only to be shut down again with a groin injury.

Unlike the Indians with Brantley and the Cubs with Schwarber, the Diamondbacks could not withstand the extended loss of Pollock. Arizona’s fill-in center fielders hit .254/.308/.397 with shaky defense on the way to a miserable 69-93 season and an organizational shakeup. He’s healthy now and he’s projected for 630 plate appearances. PECOTA sees Pollock’s production falling off a bit from 2015, but a .285/.339/.450 line and 2.2 WARP is a big part of why the system gives Arizona a far more respectable 77-85 projection.

In thinking about the returns of Brantley, Schwarber, and Pollock following injury-wrecked years, I asked the handsome, charming, and invaluable Rob McQuown to look up the biggest season-to-season jumps from actual 2016 WARP to projected 2017 WARP among position players. It’s an interesting list: 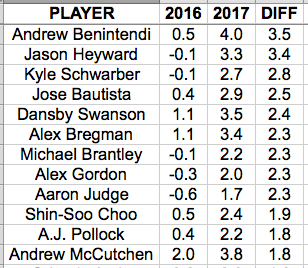 Schwarber, Brantley, and Pollock are stars coming back from lost seasons, and Shin-Soo Choo sort of fits that category as well. Jason Heyward, Jose Bautista, Alex Gordon, and Andrew McCutchen are coming back from seasons in which they were much worse than usual but also healthy enough to log at least 500 trips to the plate. And then there are the four promising young players—and PECOTA breakout picks—heading into their first full seasons in Andrew Benintendi, Dansby Swanson, Alex Bregman, and Aaron Judge.

In all, the dozen position players listed above project to be worth 34.1 WARP in 2017 after producing less than 5.0 WARP in 2016. It's not hard to imagine multiple playoff spots riding on how close they get to those totals.