Recently it was announced that no Seattle Mariner would again wear the number 11 on the field of play. Following a dramatic upswing in support from Hall of Fame voters, the ceremony for Edgar Martinez (scheduled for August 12) takes on the spirit of a hopeful preamble, a chance to honor the team’s popular hitting coach at home before sending him off to Cooperstown. This is as it should be. Baseball is built for celebration and appreciation, birthday parties and harvest festivals. It is built to mark time. There’s only one strange aspect to retiring Edgar’s number: basically, it already was. No one had worn it since his retirement in 2004.

As the news came down, my friend and colleague Nathan Bishop reacted:

Griffey was the childhood hero, Randy maybe the greatest of them all, Ichiro and Felix legends. But Edgar Martinez IS Mr. Mariner.

These words immediately struck me as bittersweet. Because while I appreciate and understand the sentiment, there already happens to be a “Mr. Mariner”: former first baseman Alvin Davis. 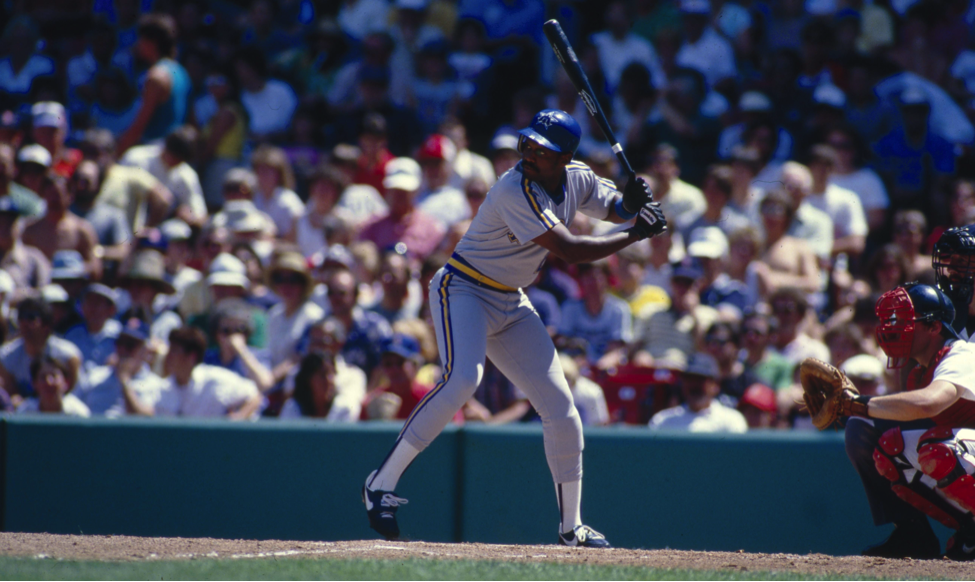 Davis was the first true star of a miserable franchise. Thanks to Ken Phelps' broken hand, the unknown sixth-round draft pick was called up early in the 1984 season; he went on to make the All-Star game and win Rookie of the Year. Sabermetrics weren’t kind to him in retrospect—he was mediocre with the glove and a ridiculously inept baserunner—but Davis did something no Mariners star did before: stuck around. For an organization that loved trading everyone they got a call on, Davis managed to etch his legacy onto the franchise over the next seven seasons.

There’s an alternate universe where Davis stayed healthy into his 30s, scratched his way to 30 WARP, and got his number retired through the “decent and loyal” clause. But in this universe, it was never going to happen. His bat speed slowed to match his footspeed; at the age of 30, his ultra-old man skills caught up with him, and he was done.

Baseball teams like to honor their greatest players by retiring their uniform numbers. Sometimes, for various reasons, they’ll want to honor a player without formally announcing that they’re honoring them; in these situations, the team will simply pull the number from circulation. Sometimes it’s just a matter of waiting for the right time. Other times, the right time never comes. 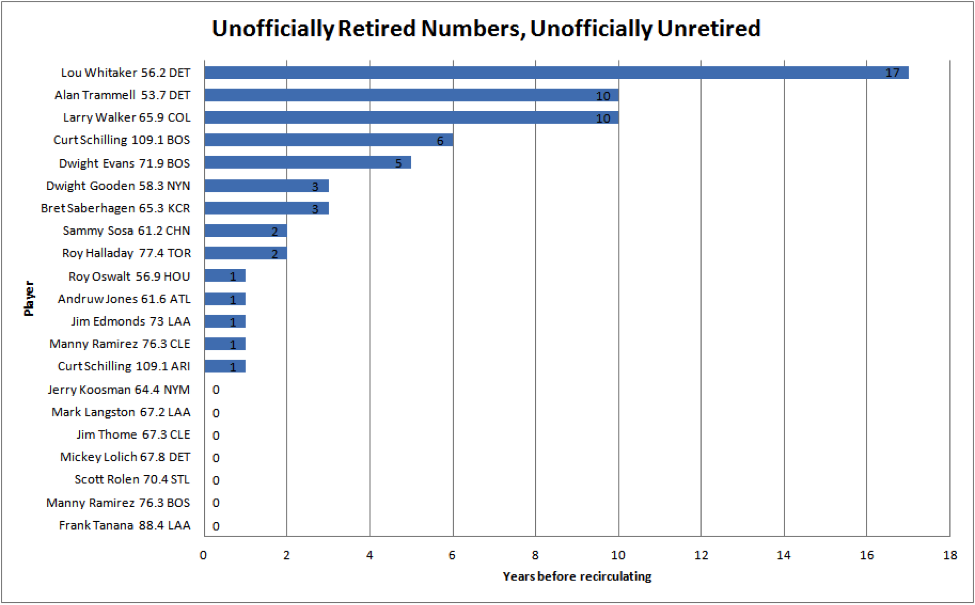 Note that these are full years out of circulation. Caveats apply; certain teams don’t believe in removing numbers from circulation, just letting other players use them until the moment they can’t anymore. And occasionally, a player will be asked for and grant their blessing for a number to be used. Larry Walker did this with fellow Canadian Justin Morneau, who grew up idolizing him. Meanwhile, Mark Langston, who is rarely considered to be among the all-time greats despite the adoration of DRA, had his number assigned to no fewer than four players the year after he left the Angels in free agency.

The sore spots here are, of course, Lou Whitaker and Alan Trammell, snubbed both at home and abroad. When Jose Iglesias asked for and was given Whitaker’s #1, the former not-quite-Hall of Famer acquiesced graciously, though it was made apparent that it wasn’t his choice to make. Trammell’s opinions on #3 are unknown. It’s a little strange that a franchise in Detroit, so starkly underrepresented in the Hall of Fame, to base its own honor so strictly on it. But such is life.

Alvin Davis returned to the Kingdom as a California Angel in 1992, after the Mariners decided not to re-sign him. It was his last day in the major leagues, and coincidentally it was Alvin Davis Night. An announced crowd of 14,219 came to thank him and wish him well. After the game, he said:

It’s definitely an honor for them [the Mariners] to do this, but it is kind of embarrassing. I really appreciate the gesture because it’s more of an honor than just saying I was a good guy. They’re going to have better players than me as far as what a guy brings to the field. But this is embarrassing because this isn’t the way I’d like to go back.

Davis had entered the game in a 1-for-28 slump. He’d already been negotiating with a Japanese team pending his inevitable release.

He earned two hits, including one in his final at-bat in the majors. "I just wanted to get a hit in my last time up," Davis said. "I had struck out the time before. I was really glad to get up there. It was a little bloop hit, but it meant a lot to me."

No one would remember, except for him. The Angels lost, 13-4. 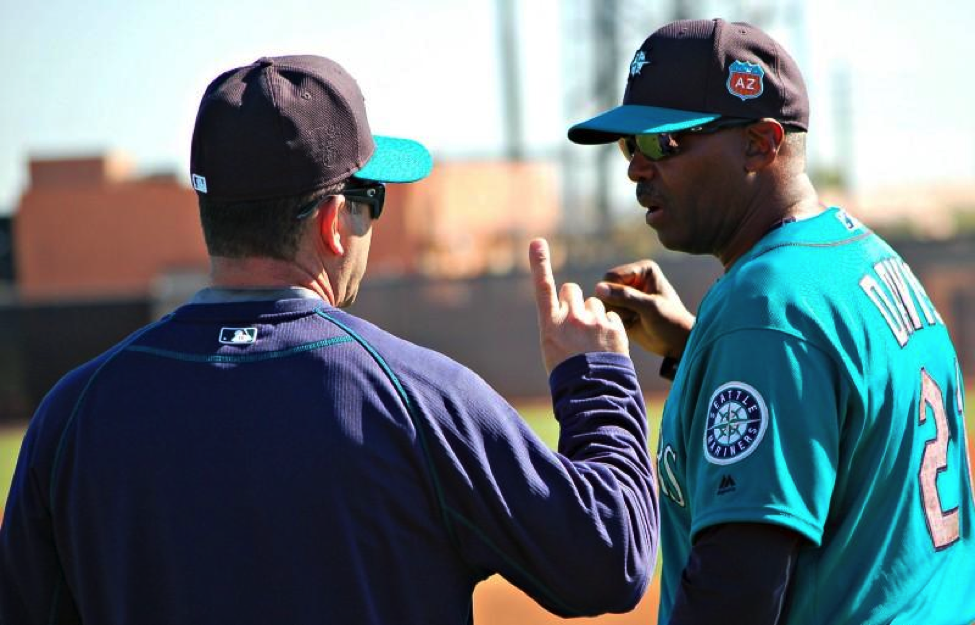 The sad truth is that fame has its own aging curve. We do as much as we can to preserve history. Baseball, I think, does it better than most. But the mind and the heart are finite things, and each new day, each baseball game slices off a layer of all those that came before it. There’s nothing to be done for this except celebrate, and remember. It’s fitting that the highest honor a team can bestow on a man is to stop that clock for a time, freeze a moment in place as best it can. But eventually this, too, fades: we know Billy Pierce as #17 for the White Sox, but with each passing year we know him less as Billy Pierce.

As for Alvin Davis, his #21 went unused for six years before free agent David Segui asked for it. It’s unclear whether it was a favor, but once a number returns, it rarely disappears again. Ruben Sierra wore it in 2002, Kendrys Morales added to its legacy in 2014. It’s since become associated as much with the similarly ill-fated Franklin Gutierrez. Now Davis’ nickname, too, is under assault. Mathematically speaking, it’s inevitable that there will be another Alvin. 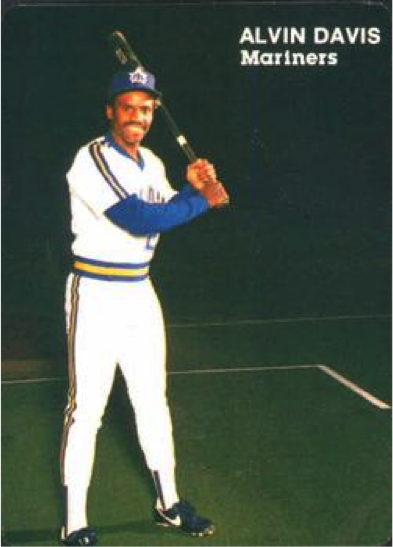 If there’s any consolation, perhaps it’s the way the picture has faded. Gone are all the 9-3 ground outs, the clutch GIDPs, the solo home runs wasted in boring, heartless 6-1 losses. Gone are the expectations of the first great Mariners dynasty, unfulfilled. What remains are the photographs, with the wrong logos on the caps, and the gentle expression of comfortable talent. That image is static, unchangeable, even as the meaning for it slips away, an unspeakable geniality, a nebulous positive force.

In the end, Alvin Davis and Edgar Martinez are both Mr. Mariner, in the sense that there’s no clear definition for what the Mariners are. As a product of their history, Davis is by far the better choice. Martinez, meanwhile, represents more of a vision of what the Mariners might become. There will be a day, difficult as it is to conceive, when the mediocrity that is the Seattle Mariners will feel foreign, unfathomable. The story of Davis and those inept early teams, when they are told, will need to be translated, adjusted for era. But no matter what, no matter how many better players come after him. it’ll be impossible to say that he wasn’t a good guy.

You need to be logged in to comment. Login or Subscribe
JohnnyFive
Thanks for this, Patrick. Always love to see articles about the Mariners on here. I've always had a soft spot for Alvin Davis, and I'm happy to see some talk of him taking place in the Edgar HOF discussion fall-out.

When you have an organization that cannot celebrate organizational success, why not celebrate the history of its players itself? They are the stories that we grew up celebrating. The Edgars, Buhners, Griffeys, and such. Let's celebrate them!
Reply to JohnnyFive
mattyjames1
Patrick, I love your articles.

I hate being "that guy" but I think I found a typo:
"...but Davis did something no Mariners star did before: struck around"

Looking forward to the next one! Thank you
Reply to mattyjames1
euqubudhp
Fixed. Thanks! And also, thank you.
Reply to euqubudhp
mattyjames1
"Alvin Davis returned to the Kingdom as a California Angel"
I like this one and I hope it's on purpose.

Reply to mattyjames1
euqubudhp
Either way, it's staying. Let's also pretend we all called it that throughout the eighties and nineties.
Reply to euqubudhp