In this series, we’re investigating the outcomes when baseball players made what appear to have been New Year’s resolutions to do something differently in 2016. But unlike the rest of us, who try to clean up the basement or drop weight, we’re looking here at specific baseball outcomes. In the first article we considered batters who hit markedly more (or less) to the opposite field in 2016 than in 2015. (Spoiler: It didn’t seem to help much.)

This time we’re going to look at whether batters who hit a lot more balls on the ground or in the air gain a benefit. The relationship between ground balls and balls hit in the air is well-established. Here’s the breakdown when batters hit ground balls, fly balls, and line drives in 2016 (I’ve excluded the 1,769 plate appearances that resulted in bunts):

When batters hit the ball on the ground last year, they batted .246 with a .267 slugging percentage. On a per-plate appearance basis, they hit singles 22.6 percent of the time, doubles 1.9 percent, triples 0.1 percent, and home runs 0.0 percent. That makes sense; it’s pretty hard to hit an extra-base grounder. Additionally, batters hitting grounders reached base on error 2.5 percent of the time, but 6.4 percent of plate appearances ended with the batter grounding into a double play.

Fly balls yielded a terrible .174 batting average but an excellent .539 slugging percentage because 10.3 percent of fly balls left the yard. With fly balls, it’s great if they go over the fence, but if they don’t they’re almost certain to be caught, hence the .074 BABIP.

That would seem to suggest that for hitters, grounders aren’t good, and the opposite is true for pitchers. Well, not necessarily. Among batting title qualifiers, Christian Yelich, who posted a .318 TAv, had the fifth-highest percentage of batted balls hit on the ground at 58.4 percent. Ryan Braun was seventh at 55.8 percent, and he had a .316 TAv and a .538 slugging percentage. At the other end, Stephen Vogt had only a 30.7 percent ground-ball rate, second lowest in the majors, but that yielded just a .262 TAv and .406 SLG.

Same with pitchers: Among ERA qualifiers, Jaime Garcia had the second-highest ground-ball rate, 58.4 percent, and he allowed a .281 TAv and .448 slugging percentage en route to a 4.67 ERA, the highest of his career. Dallas Keuchel has been a ground-ball machine throughout his career, and his 57.8 percent grounder rate was fourth-highest in the majors last year, but let’s just say his 2016 didn’t match his Cy Young 2015. On the other hand, Max Scherzer (34.7 percent) and Justin Verlander (35.6 percent) had the sixth- and seventh-lowest ground-ball rates last year, and they didn’t suffer for it.

The purpose of this exercise, though, isn’t to determine whether ground-ball pitchers or hitters are good or bad. (I litigated that case, from the pitchers’ perspective, in three articles over the summer.) Rather, we’re looking at players who seemingly made New Year’s resolutions to change a year ago. In this case, we’re looking at hitters who changed the launch angle of their batted balls, either hitting a lot more grounders or a lot more balls in the air. Who did that, and how did they do? Did the resolutions work out?

Here are the 10 hitters with the greatest decrease in batted balls hit on the ground: 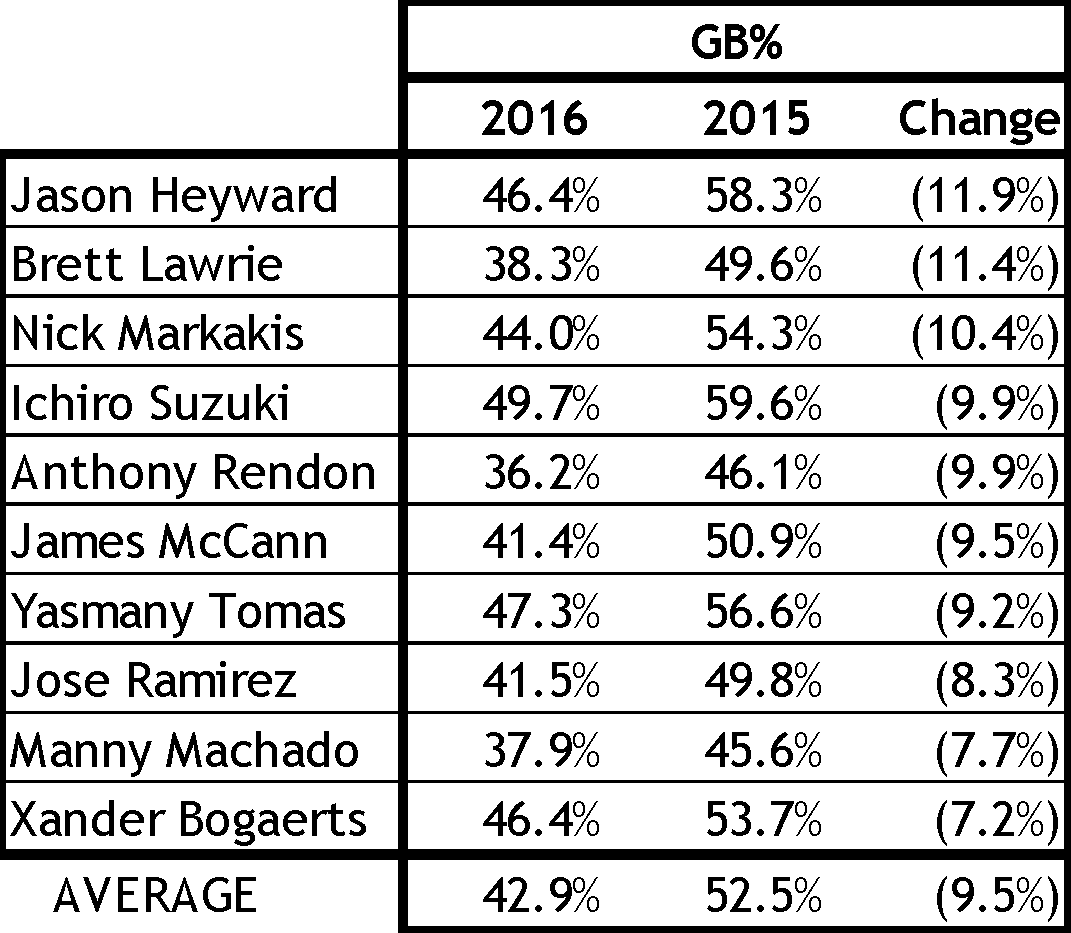 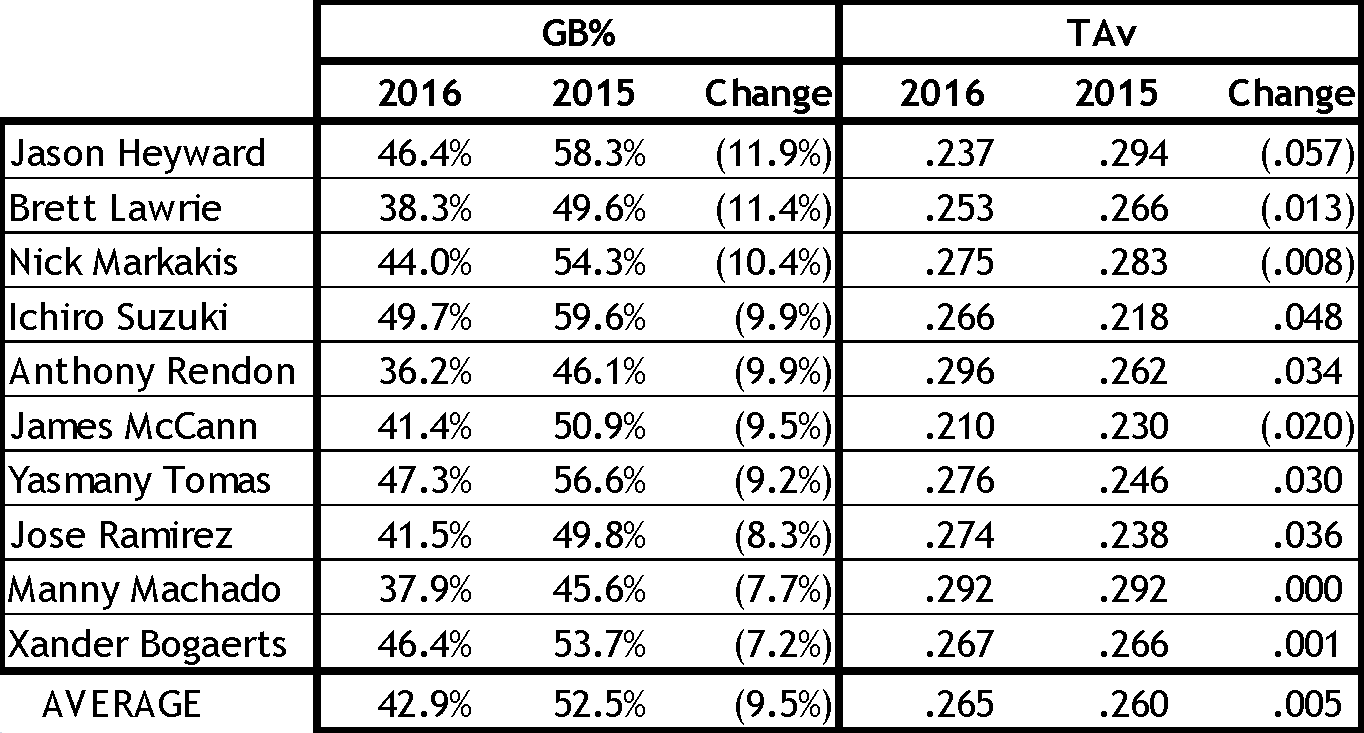 Granted, there are no real superstars on this list, but there are several solid performances. Hitting balls in the air seems to have helped this group, in aggregate.

One caveat: Baseball analyst and The Book co-author Mitchel Lichtman pointed out in a smart comment that improvement or decline vs. expectations are more relevant than improvement or decline vs. actual results. For example, Nick Markakis’ TAv declined in 2016. However, PECOTA expected him to produce a TAv of just .262. So while he finished with a TAv eight points lower in 2016 than 2015, he beat his PECOTA projection by 13 points, so his season was arguably positive. Analyzing results vs. expectations doesn’t change the conclusion here—these 10 hitters beat their PECOTA projection by an average of eight points, just as they beat their 2015 results by five—but it will be relevant in some cases, particularly when there are players who were significant over- or under-performers in 2015.

How about players who hit more on the ground? We’d expect them to have less success. (And to be weirdos for choosing “more grounders” as their resolution): 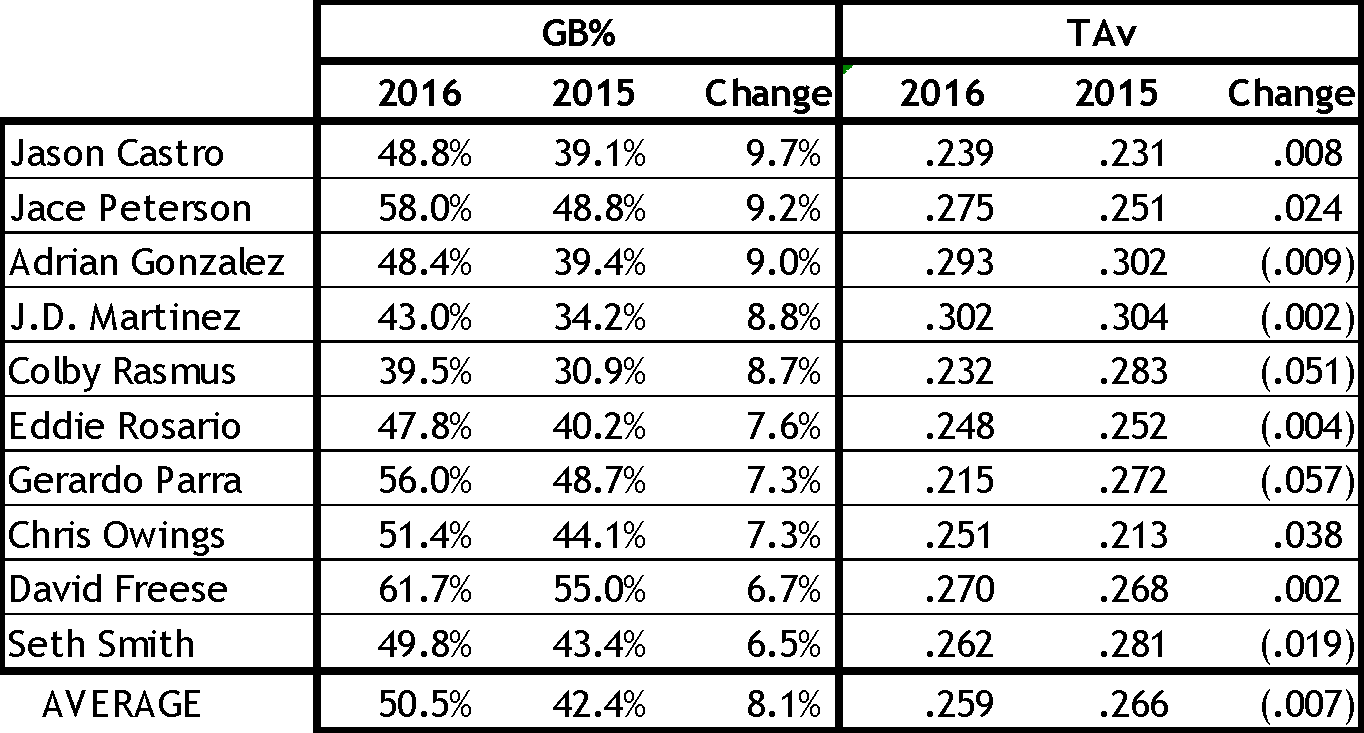 This, I think, is a more interesting list than the list of players who reduced their ground-ball percentage the most. In Adrian Gonzalez and J.D. Martinez, we have two of the better hitters in baseball. In Colby Rasmus and Gerardo Parra, there are two of the most prominent 2016 flameouts. In fact, relative to expectations (i.e, PECOTA), this group basically treaded water in 2016, with a negligible average TAv increase of .002. That doesn’t sound very conclusive!

Let’s look beyond the top and bottom 10 by checking all 185 players who batted at least 350 times in both years. This list divides them into equally-sized deciles. I calculated the weighted average decrease or increase in ground-ball percentage as well as the weighted average change in TAv: 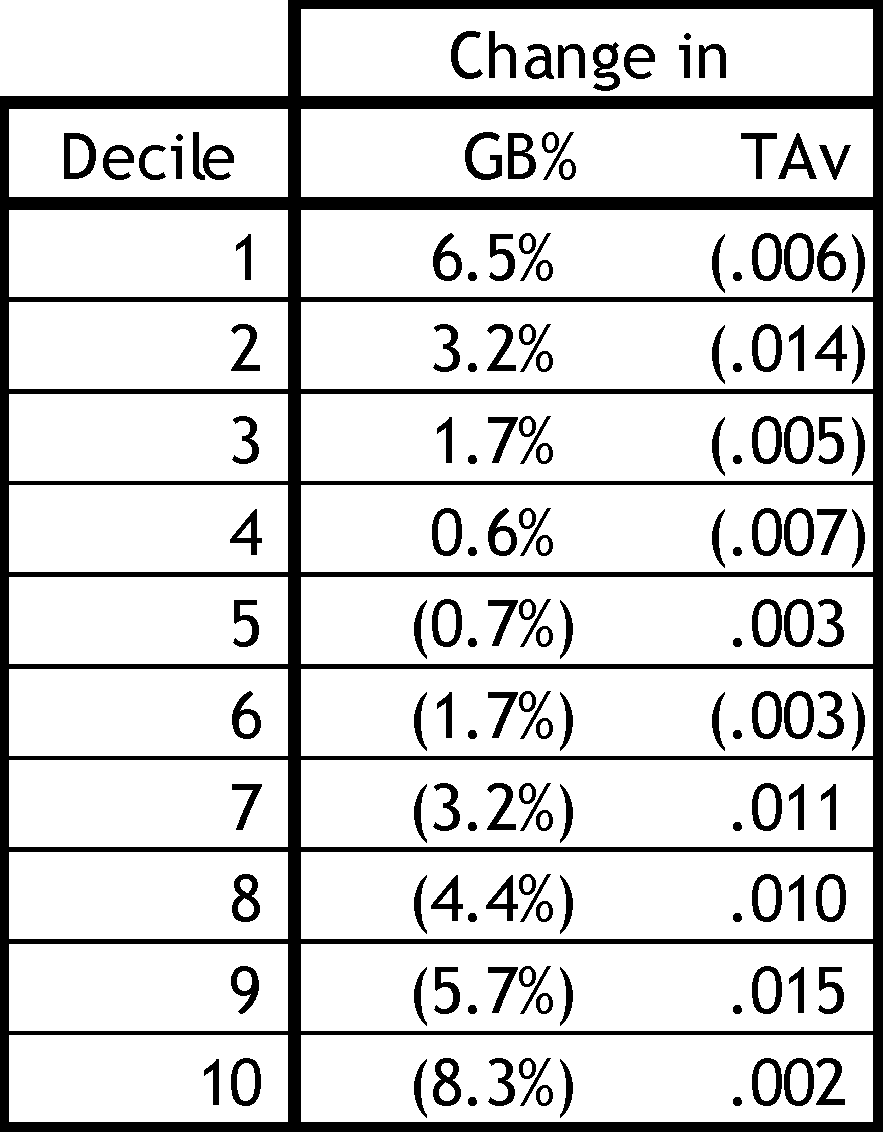 I think it’s easier to see what’s going on here with a graph: 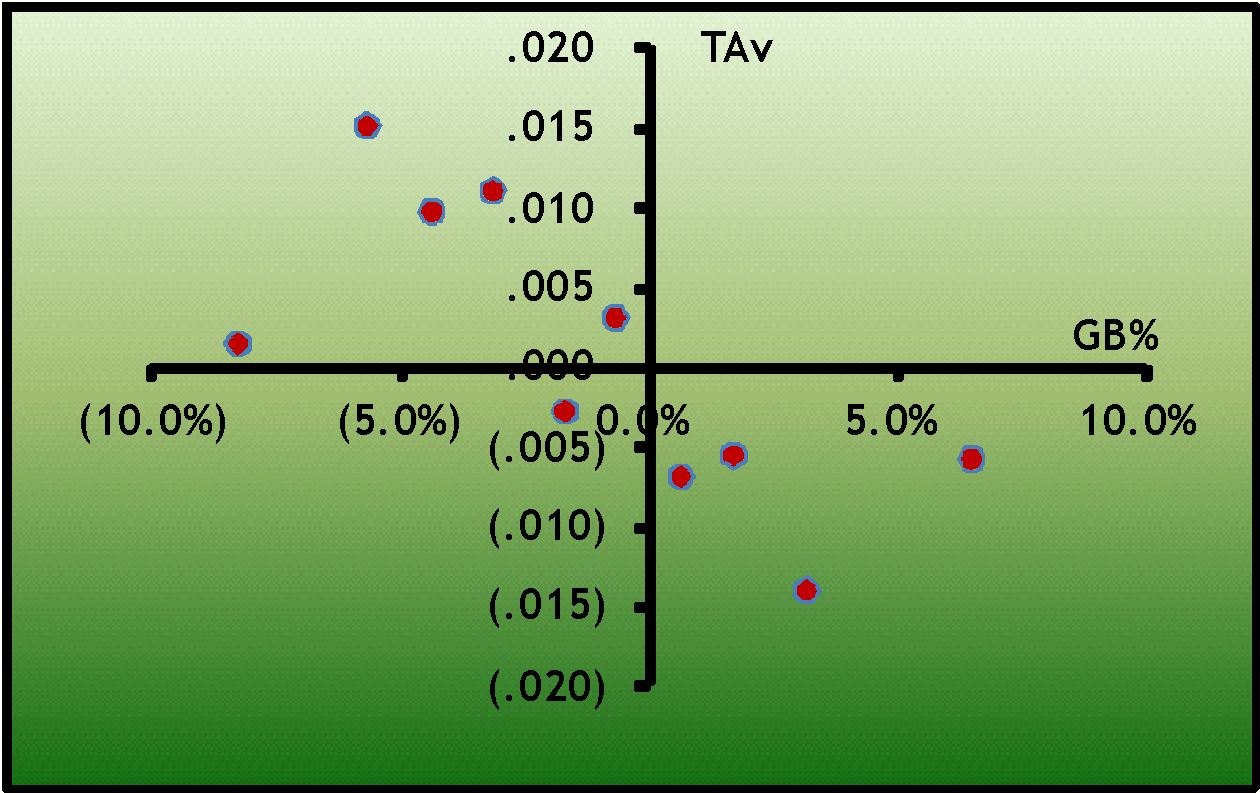 The dots are mostly in the upper-left quadrant and the lower-right quadrant. That means there does appear to be a relationship: Players who increased their ground-ball percentage from 2015 to 2016 did worse, and those who decreased it did better. So our intuition was correct! But there are two big caveats. First, the majority of players didn’t change much. There were more hitters who decreased their ground-ball percentage than increased it, sure, but the differences are clustered around zero. Second, for the most extreme batters—those in the first and tenth deciles—the differences in batting outcomes, measured by TAv, are quite small.

We can say that the evidence of 2015-2016 bears out the notion that hitting fewer balls on the ground is, in general, good. However, the case of players who decreased their ground-ball percentage the most—those in the tenth decile—suggests that while they may have done a nice job of sticking to their resolution, lowering their ground-ball percentage by more than eight percentage points, the result was … well, it’s like resolving to call your brother more often but you still don’t get along with him. As with the case of pulling the ball less, it didn’t change outcomes much.

You need to be logged in to comment. Login or Subscribe
mainsr
Hey if anyone makes it down this far--I want to clarify something about HR/FB. The calculation in this article of home runs per fly ball, 10.3%, is based on the Baseball-Reference table shown in the text. If you look at our HR/FB figures, or FanGraphs', that number looks curiously low. The reason is that the B-R figure for fly balls includes popups. We (and FanGraphs) count popups separately. (And, as you might imagine, if there's a home run on a popup, something went terribly wrong on defense.) So the denominator driving the 10.3% figure is larger than the one you may see elsewhere.

This doesn't change any of the conclusions in the article, of course.
Reply to mainsr
lichtman
I wouldn't get too hung up on the outliers in your graph above. There looks like a linear relationship but I would plot all players and then look at my regression especially the R^2. Don't know how many players in each of your deciles but probably not much which means that the differences in each of those deciles is not going to be very reliable.

Even with 20 players in each decile (around 8000 PA), one binomial standard deviation of the difference from one year to the next is around 7 or 8 points! Expect to see lots of dots all over a chart like that, by chance alone.

Also in 2016 with the ball going significantly further than in prior seasons for some reason, it is probably better to put the ball in the air compared to if the ball were the same. For whatever that is worth as far as conclusions are concerned (IDK).
Reply to lichtman
mainsr
I agree that 2016 rewarded air balls.

Re my deciles, consistent with your suggestion last week, I treated players as continuous variables, with each decile containing exactly 10,316.1 plate appearances. So, for examples, my second decile comprised a full season of 17 players, plus 161.9 plate appearances of Mike Trout and 198.2 of Johnny Giavotella. Since I'm weighting everything by PA, I'm OK with fractional PAs. To your point, each decile comprised 18-21 full and fractional players.