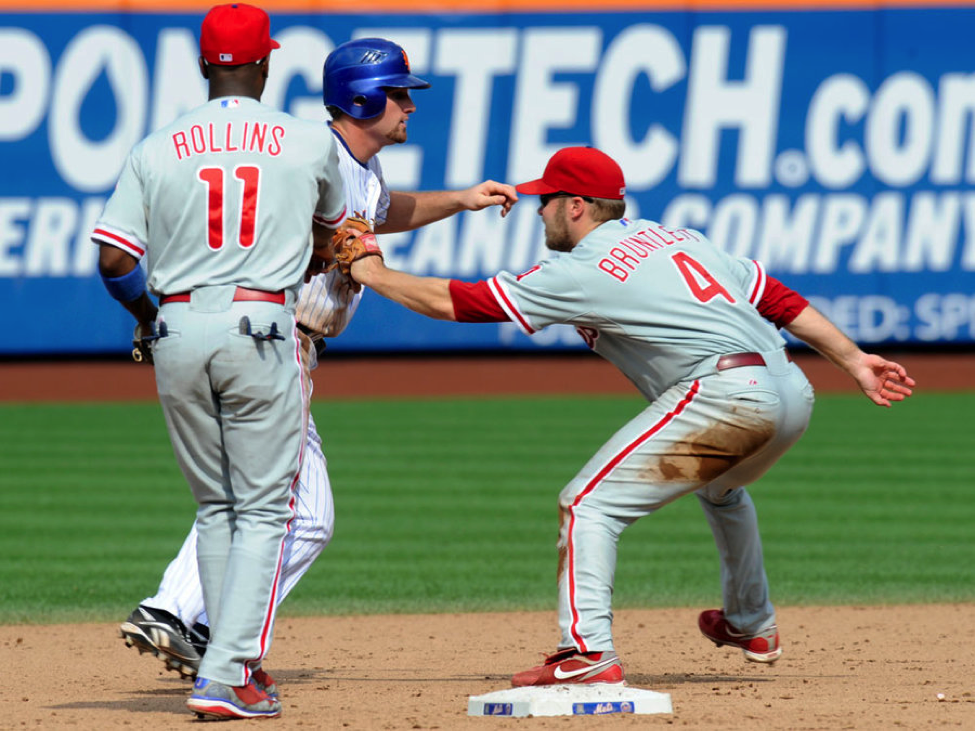 Theirs are names will be remembered forever: Bruntlett. Morandini. Padgett. Neun. Wambsganss. They’re among the 15 ballplayers who are members of one of the most elite clubs in the game: those who have completed an unassisted triple play.

It’s a strange thing to celebrate. Like so much of life, the vast majority of the moment is created by circumstance: the correct base state, no outs, runners going. Then the sharp line drive to the exact right spot, a single moment of dramatic irony as the runners, heads down, come to realize that they’re already dead.

Contrast the tone of this video, in which Ron Hansen describes his unique feat, to this loving tribute. There is, to put it kindly, a certain amount of dissonance.

It can only be the rarity that causes us to celebrate, to the degree that we do, these freak moments of baseball history. After all, there’s nothing particularly aesthetically pleasing about the solo nature of the play; the defensive setup of a baseball team is a mechanical marvel, a cunning combination of specialized parts in harmony. Having a single person wrest responsibility from his comrades is neutral at best and, depending on the amount of effort required, somewhat off-putting in its selfishness. In all other realms of sport, the assist is celebrated; why in this particular case the opposite? It feels almost un-American.

Consider the story of Tigers first baseman Johnny Neun, who made his play in the ninth inning of a 1-0 game, as related by Richard Bak:

Neun knew perfectly well what he had accomplished. In fact, he had been thinking about the possibility all day. Amazingly, the previous day Chicago Cubs shortstop Johnny Cooney had pulled off an unassisted triple play against Pittsburgh. Neun had read newspaper accounts of Cooney’s feat before taking the field against Cleveland and was aware of its rarity. Neun could have tossed the ball to shortstop Jackie Tavener, who was standing on second base and shouting for the ball, for the third out. Instead, Neun waved off Tavener and outraced the lumbering Myatt to the bag to complete the triple play.

I confess that my antipathy may be the result of my own bias. As a boy I witnessed an unassisted triple play as a member of the Normandy Park Royals, the neighborhood’s favorite third-place Little League team. With runners on second and third, while I watched from shortstop, a faceless little batter lifted a fly to shallow left center. The runners broke, underestimating the athleticism of my friend Andy Gaunt, who caught it at full speed and intercepted both runners on their way back to third base.

Being good children, teammates, and Americans, we showered Andy with approval, but we all knew that this wasn’t so much an achievement as the source of shame for the villains across the diamond. The whole thing felt ridiculous, and made the game itself feel ridiculous with it.

Poor Ron Hansen is a turning point in unassisted triple play history, in that his is both the median and the last to go unrecorded by video. Prior to that we’re forced to rely on apocrypha. The tale of Neal Ball, who recorded the first in 1909:

Ball’s great-niece, Kathia Miller, writing in 2009 on the 100th anniversary of the unassisted triple play, said that the 11,000 people at the game gave Ball “a great ovation” and that removing all of the hats that had been thrown on the field in appreciation delayed the game by 20 minutes. She said Ball was so unassuming that after making the play he merely put his glove down and returned to the dugout, leading Cy Young to ask: “Where are you going, Neal?” To which Ball succinctly replied: “That’s three outs.”

If true, this seems like a bit of an overreaction to a play that came in the second inning of a July game, although the detail about leaving his glove on the ground for his opponent makes up for it. Perhaps I just struggle with the logistics of mass hat-returning. How does one go about such a task? How many people downgraded their hats that day? How could one explain such a needless loss to one’s wife? “Well … you see, the second baseman, he caught a ball, and then tagged out two runners.”

Let’s leave the hazy days of haberdashery behind us, and move forward to our evidence. Watching the other seven will require less than four minutes of your time.

There is so much conflict in here. At 0:07, witness Mickey Morandini toss the ball high into the air, and then immediately crane his neck to watch it, wondering if he should have done that, if he should have held onto it. As it lands softly he continues to stare, but he cannot break stride, and his legs carry him away from his own moment in history. All he’ll allow himself is a little extra wind-up on his high-fives in the dugout.

At 0:22, John Valentin’s thick baseball-playing veneer is if anything even thicker than Morandini’s. As he takes the soft liner, he maintains a static pace across the bag, barely turning himself to be within arm’s reach of the third runner. Having completed his task, he maintains that exact speed, emotions buried deep, to the steps of the dugout where he proceeds to knock dirt off his cleats just like the other eight men on the field would do. That’s all. John Valentin will not allow himself to be anything more than the mean of every baseball player in history, no matter what fate decides to do.

The only benefit of it happening at all, beyond the 0.12 Win Probability Added, is the 30 seconds of desperate floundering by former Mariner broadcaster Ron Fairly. I have no training in the art of broadcasting, but I’m fairly sure that you get to say “wait a minute” two times in a row at most.

It’s downhill from here. At 1:47, Rafael Furcal makes a legitimately excellent catch and is given the appropriate fanfare by Jon Miller, but is followed at 2:15 by Troy Tulowitzki, who appears to have missed second and has to circle back to step on it after making the tag on the runner advancing from first. Then he throws to first anyway, like a man trying to get four outs, or who is suddenly unsure whether he may need four outs. It’s this formality, like throwing to first after a dropped third strike, that really undercuts any grandeur from the unassisted or even the triple play aspect; the ball is hit to a certain place, not even particularly poorly, and the inning is over.

Finally, at 3:09, we have Eric Bruntlett. His play, from an aesthetic standpoint, begins better than any of the others: playing close to the bag, he spears the liner and lands on second, making the first two outs simultaneously. And the ending of the play is equally satisfying; being the final out(s) of the game, Bruntlett is freed of his responsibility of being a Serious Athlete and can laugh at his and his friends’ fortune. But between, the tag.

What happens is not really Bruntlett’s fault. Part of it is Daniel Murphy’s. Tagging a runner in the middle of the basepaths is always, always an ugly thing. Unlike the others above, Murphy doesn’t concede, but instead makes that sad little baseball dance that almost never works, and certainly never works when the runner has to turn around and run back 80 feet to be safe.

So we’re provided this clownish moment, the one where, as children, we would have run off the basepaths and perhaps all the way back home. It might have been the better choice. Certainly it would have been more satisfying for Bruntlett, watching Murphy fail to behave like a Serious Ballplayer, turn and lob a slow toss to Ryan Howard for the out, rather than chase him down like the nerd trying to retrieve his math textbook.

The appeal of rarity in baseball is understandable; between its millions of iterations, the same cliches spouted by the same announcers while the same catchers calling for the same 91 mph fastballs, anything different is a relief from the monotony and forcefulness of life. But it seems to be as though there are other actions, equal in rarity but perhaps not so tidily aligned to Retrosheet, that better deserve our cataloguing efforts, like the times when a runner actually does successfully juke a fielder. Or when a runner scores from second on a sacrifice fly.

Beauty is where we find it, and we each find it in different places. But let’s not treat the thing we never see as the thing we most want to see. Otherwise we’d be forced to gather round and celebrate September 18, the anniversary of Dan Straily’s only base hit.

You need to be logged in to comment. Login or Subscribe
AWBenkert
In the link to the Hansen play, the text says he was playing for Washington while the still photos show him in a Baltimore uniform.
Reply to AWBenkert