The ultimate equalizer in the batter vs. pitcher matchup—the one thing that can turn the hardest thing to do in sports into roughly the 37th-hardest thing to do in sports (right behind catching a Brett Favre spiral)—is a pitcher who’s tipping his pitches. Suddenly a deep and nasty repertoire starts to break down–a 95 mph fastball moves in slow motion when a hitter knows it's coming and a hard-biting slider out of the same arm slot is magically easy to spit on.

Many otherwise perfectly capable pitchers have been undone by hitters picking up on their small idiosyncrasies, and although usually ironed out in time, it can take the offender a while to even realize what he’s doing wrong. What about the reverse, though? What about a hitter tipping his … well, tipping his thought process? Is it possible that a hitter can make some type of repeatable yet barely noticeable movement to cue in the opposition as to what he’s thinking?

If it is possible, Wil Myers might be a good case study. A few weeks back I wrote about Myers’ season in San Diego, one in which he accumulated 3.5 WARP and a .290 TAv yet still disappointed, somehow, thanks to even loftier expectations. In discussing his swing mechanics with former BP'er R.J. Anderson, something interesting came up. Anderson noted that sometimes Myers “adds bend” to his stance in breaking-ball situations, potentially tipping the pitcher off as to what kind of pitch he’s expecting.

Since Myers has an extreme upright stance, even a slight alteration should be relatively easy to recognize. So, intrigued and frankly a bit bewildered by Anderson’s ability to catch such things, I went searching for video evidence. I checked on a bunch of Myers’ at-bats in both fastball counts (2-0, 3-1, 3-0) and breaking ball counts (0-2, 1-2) and, yup, it’s there. It’s subtle, but it’s there.

Here’s Myers against the Cubs’ Hector Rondon back in May:

On the left is Myers in a 1-1 count, likely looking for one of Rondon’s 97 mph fastballs. On the right is Myers in a 1-2 count, where he’s probably warier of Rondon’s slider, a pitch he throws 41 percent of the time against right-handed hitters in two-strike counts. It might be tough to see in real-time, but check out Myers’ front leg when Rondon starts his delivery (1-1 on left, 1-2 on right): 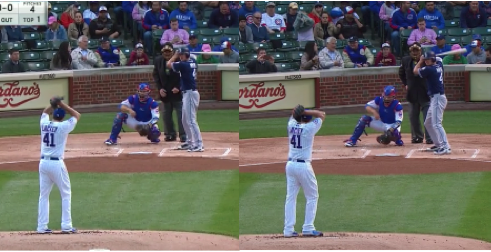 It’s not as though you have to go searching for these; for around half the pitches I watched in breaking-ball counts, it was pronounced enough to notice, although there are times when it’s less exaggerated (vs. Romo) or non-existent.

Why does Myers do it? Without getting into his head, it seems like Myers—for whatever reason—likes to resort to a near straight-up stance as his default approach, perhaps setting him up well for belt-high heat. When he gets behind in the count and starts anticipating a higher percentage of breaking balls, he crouches down some to give himself a better chance to get to low-and-away off-speed stuff. That’s the theory, anyway.

Do other teams notice? The short answer is yes—they notice pretty much everything. While some stuff probably does slip through the cracks, it’s not hard to imagine someone picking up on this pretty quickly, particularly when Myers is being watched by both battery mates, plus numerous coaches and other players, plus a crew of video-based and in-person advance scouts. It’d be more surprising if Myers made it through a season—or, shoot, even a series—without anybody picking up on it.

Can they exploit it? Maybe. If Myers is thinking low-and-away every time he gets to a two-strike/breaking-ball count, and he’s telegraphing it, then it’d be relatively easy for pitchers to bust him up-and-in with a high fastball every now and then—at least at a higher rate than they would to a hitter without the same tell. Of course, the advantage could be mitigated some by context; namely that most hitters are probably thinking breaking ball in breaking-ball counts, but maybe just aren’t giving it away. Also, hitters just aren’t very good in those situations anyway, so there’s not much left to exploit.

In fact, Myers hasn’t been particularly bad when behind in the count, at least when compared to the rest of the league:

And pitchers haven’t really attacked him all that differently, either. In 2016, when behind in the count against a righty, Myers saw a breaking pitch 34 percent of the time, a number that jibes well enough with league-average rates. Of course, it’s possible that pitchers don’t want Myers to know that they know what he’s thinking, so they’re saving a heavier diet of two-strike fastballs for super important situations or, someday, the playoffs. It’s also possible that there’s some immeasurable benefit in knowing that the hitter is thinking breaking ball and still throwing one. It’s also possible that you’re Sergio Romo and throwing breaking balls is just what you do.

If there’s one thing hitters have going for them, it’s that pitchers—with their high-90s fastballs and wipeout sliders and generous strike zones—haven’t yet mastered telepathy. Instead they’re left to engage in a guessing game with hitters, trying to out-think them if not simply overpower them. Myers is a good young hitter, but he might be giving too much away to his already well-armed adversaries.