Long after Cole Hamels retires to his palatial suburban estate outside of Dallas–perhaps with another World Series ring or two and a borderline Hall of Fame resume–and looks back on all the innings he tossed (2,300 and counting entering this postseason), it’s safe to assume the third inning of Game 1 of the ALDS against the Blue Jays will not rank high on his all-time list. The numbers were grisly:

For Hamels, the inning was a toxic blend of predictability and missed locations, and it really just served as microcosm for his outing. The first nine pitches of the inning were fastballs, including eight four-seamers. Of the first seven batters he faced in the inning, 31 of 32 pitches were curveballs or fastballs, and just five non-four-seam fastballs. When you look back at how Hamels finished the regular season, though, this predictability was, um, quite predictable.

As the broadcast mentioned briefly, Hamels struggled down the stretch, posting a 1.50 WHIP, 6.75 ERA, and .853 opponents' OPS in his final six starts. During that span, as you can see below, he could rely on just two pitches:

Those are some extreme numbers, especially with two strikes. Hamels entered the game as a two-pitch pitcher, and the Blue Jays knew it. Because of this, Hamels was handcuffed from the beginning.

And the writing was on the wall before the third inning meltdown, as it was clear from the outset right-handers were going to be a thorn in Hamels’ lanky side, even if they came up empty in the opening two frames. In Josh Donaldson’s first-inning at-bat, which resulted in a one-out walk before he was stranded, Hamels needed 10 pitches. Russell Martin struck out leading off the second inning, but it took eight pitches to put him away. They made him work (18 pitches combined), and with each pitch being either a fastball or curve, the Blue Jays' right-handed-heavy lineup got a good sense from the jump of Hamels' plan of attack.

Hamels' overwhelming reliance on his fastball and curve was never more evident than in his encounters with Donaldson. So, why not show something different to Donaldson? The answer could lie in a previous encounter. Hamels did not face the Blue Jays in 2016, but he went up against them twice in last season’s ALDS. In Donaldson’s first at-bat in Game 1, in front of a raucous Sky Dome crowd (yeah, I know the stadium’s current name, but I’m aging, cranky, and nostalgic) experiencing postseason baseball for the first time in 22 years, Donaldson homered on a two-strike changeup Hamels left over the middle of the plate.

In the 22 pitches Hamels threw Donaldson the remainder of the series, all were either fastballs or curves, without a single change mixed in. The strategy worked well for Hamels and the Rangers, as Donaldson went 0-for-5 against him after the home run. Hamels brought the same approach into Thursday’s game, throwing nothing but fastballs and curves in Donaldson’s 10-pitch first-inning plate appearance. In his second trip to the plate, Hamels got ahead 0-2 with a pair of curves, and after Donaldson laid off a fastball, Hamels finally broke out a change. Donaldson took it for ball two.

In his career against right-handed batters, Hamels has gone to his changeup with 28 percent frequency (21 percent this season). However, going back to last postseason, he went 35 pitches in between throwing Donaldson a change, allowing one of the the league’s best hitters to effectively eliminate a pitch from Hamels' repertoire. A pitch later, he came back with a curve. Donaldson lined it down the left-field line, scoring Ezequiel Cabrera, and giving Toronto a 1-0 lead. Hamels threw just eight changes on the day, and never back-to-back, giving Blue Jays hitters a pretty good idea that after seeing a change, they were guaranteed to see a fastball or curve.

While the predictability played a role, there was a second part to Hamels’ ineffectiveness. Missed locations were a recurring theme. Martin’s one-out walk that preceded Troy Tulowitzki’s bases-clearing double came on a 3-1 four-seam fastball that Jonathan Lucroy wanted down on the inner half, where Martin has a slight hole in his swing. The pitch, however, missed way up for ball four, and setting up the knockout blow.

When Melvin Upton Jr. led off the fourth, Hamels jumped ahead 0-2. Lucroy then set up on inner half of the plate, in the exact location well below the knees he had set up. Hamels managed to come inside, but it was with a 92 mph fastball well above the belt. For all of Upton’s continued struggles in 2016, he fared well when left-handers stayed up and over the inner half: 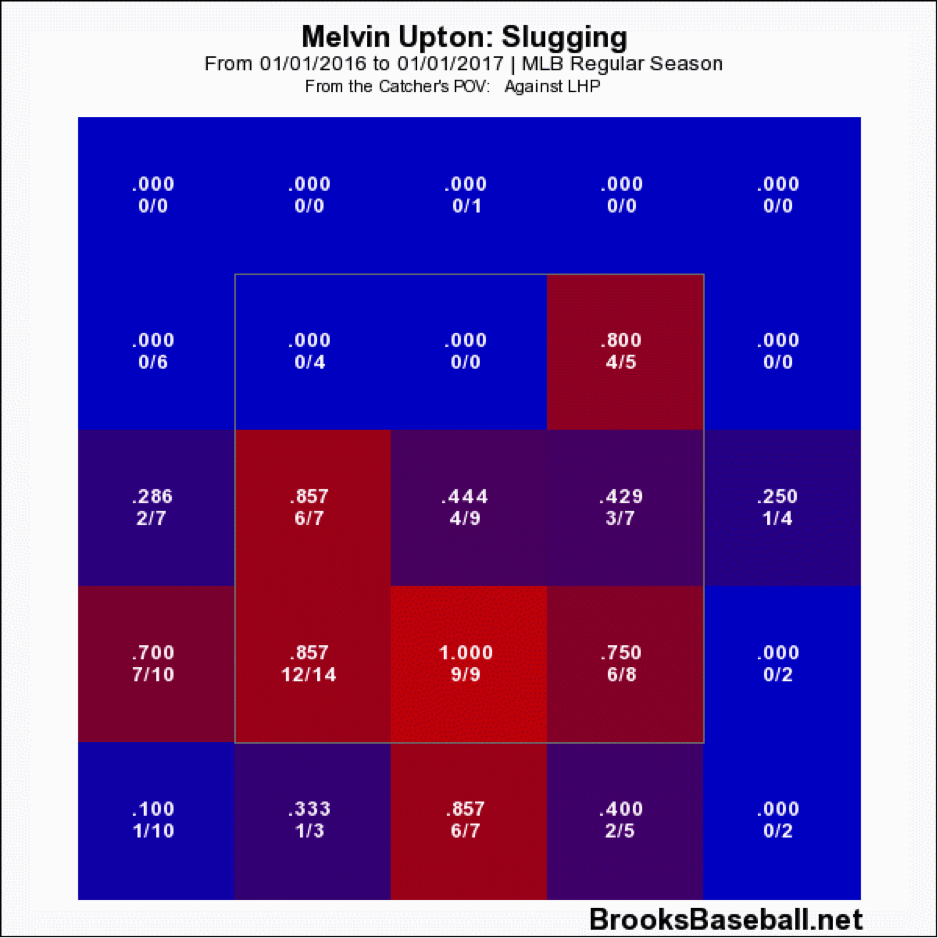 Upton turned on the fastball just below the letters, and launched it over the left-field wall. The home run made it 6-0, and three batters later Hamels would depart, trailing 7-0. Hamels missed his spots and the Blue Jays made him pay. The Blue Jays would add three more runs, and cruise to a 10-1 victory in Game 1.

Hamels had a weird season. He reached 200 strikeouts for the fifth time, posted the second-best DRA of his career, and was named an All-Star. However, he also put up career-worst marks in FIP and WHIP, and then struggled in the final month-plus. After Game 1, it’s not clear where Hamels goes from here. He continues to transition from being a four-seam fastball dominant pitcher (a career-low 24 usage rate this season), but by the end of the season it was just one of two pitches he could trust, along with his curve.

He leaned on both early and often in Game 1, but the Blue Jays were able to lay off the ones off the plate, fight off the tough pitches, and capitalize on the mistakes. At the moment, Hamels does not appear to trust his changeup, cutter, or sinker, and he is struggling to locate and execute his four-seam and curve. He might have received the start in the series opener, but right now, Hamels is far from a staff ace.