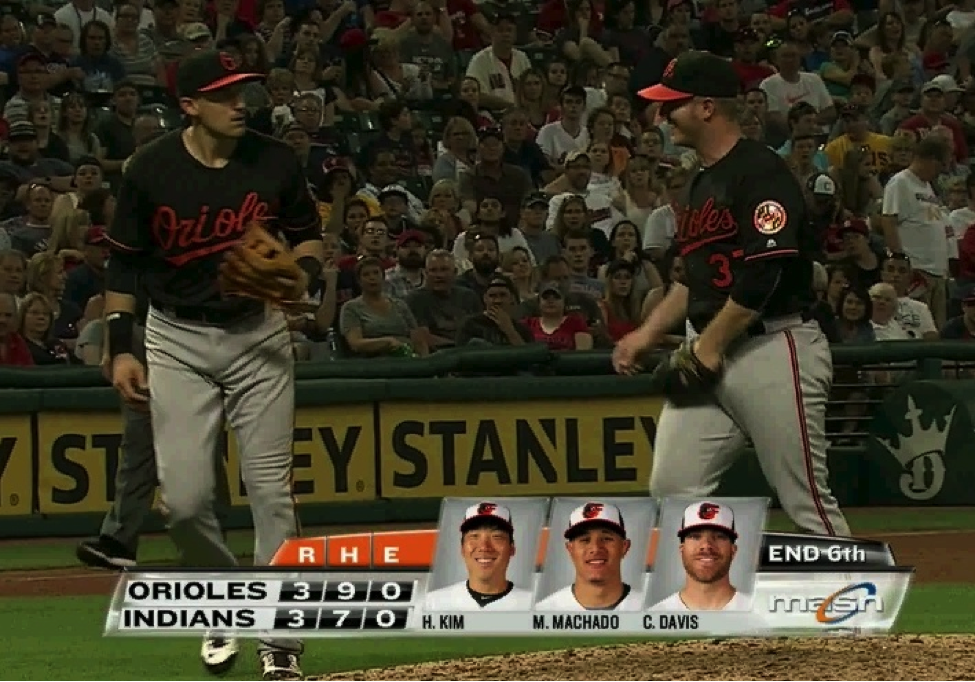 Pitchers do not catch pop flies. It’s one of the rules. This started innocently enough: the infield has its hierarchy, just like the center fielder outranks his comrades. And pop flies, depending on the amount of backspin, can offer a tricky fade for someone facing it head-on. It makes sense for the corner infielder, tracking the ball from left to right, to get a better read. But as with all things, guideline slowly transforms into dogma, and now a pitcher who makes a catch elicits a reaction ranging from surprise to disdain.

And so they stopped. Pitchers are now reduced to figureheads, pointing vainly at the ball and commanding the troops. But sometimes a pitcher will conscientiously object to societal mores. He will resist the dehumanizing synecdoche that aims to reduce him to his single skill. Perhaps it’s the climax of a long-waged battle against typecasting, a desire to be known as an athlete and not just an arm. Or perhaps it’s a flicker of thoughtless rebellion, a momentary cry against boredom. Or maybe it’s hit right to them, and they’re just stuck being a hero.

Forty-one times this season, a batter has hit a ball with a launch angle greater than 60 degrees, caught by the pitcher. They dropped zero of them. So let’s take a moment to analyze and celebrate this rare feat of, if not always athleticism, at least competence. Here’s a clumsy hand-drawn plot of where those catches were made: 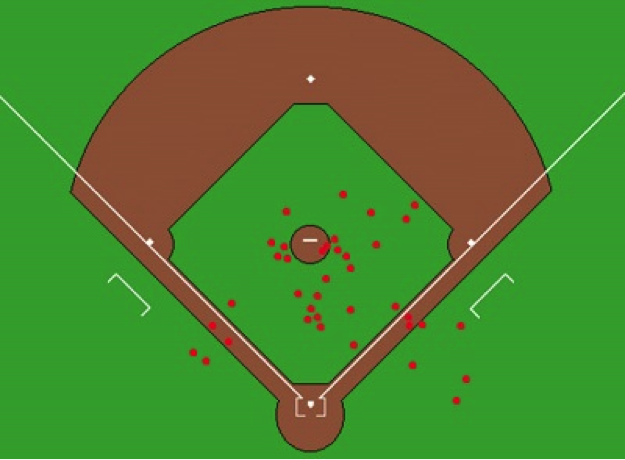 This is the kind of data that, as we say in the business, “resists analysis.” So instead, let’s break things down into some arbitrary categories, with the help of everyone’s favorite analytical tool, the animated GIF.

ARCHETYPE 1: THE MAN ON THE ISLAND

“Well, he called for it, then he looked at the catcher. It’s almost like he wasn’t allowed to catch it.”

Sometimes there’s no time. A broken bat, a lunge at a pitch outside the zone, and then: nothing. The infielders are too far away, and for a moment the pitcher really is all alone, re-living little league. Mercifully, these tend to be the laziest of flies, but also provide the least athletic of opportunities, as we see with Mat Latos:

Latos cranes his neck skyward, arms outstretched less to ward off invisible teammates as to hurl supplication at the divinity in the background. He approaches too slowly, as if stalling will allow someone to swoop in to save him, forcing him to make a two-handed child’s basket catch and accompanying giggle. Notice that the only person in the stadium who believes in the pitcher is batter Carlos Santana, who fails to leave the box. Latos’ dignity might better have been served by letting the ball land and then tossing to first.

Daniel Norris, mere days ago, fielded a pop fly after being called off by a non-existent being:

This clip is provided not to shame Daniel Norris, a coordinated and ambulatory human being. He may have lost the ball in the light, or heard Ian Kinsler call. What it reveals isn’t failure but doubt, doubt embedded into the heart of the pitcher through years of subjugation, the subliminal teaching that he’s doomed to fail. (Side note: look at Daniel Castro out of the box. He sees Norris call and he’s thinking double. We are all each of us terrible people.)

“Given some of these big infielders, I’d rather see the pitcher try to catch the ball.”

Sometimes greatness is thrust upon us. This is the plot of so many mid-budget late-spring Hollywood blockbusters: the average man, just dropping off his children at school, is caught by an earthquake/volcano/alien attack and must take matters into his own hands, not for the glory, but to do what needs to be done. So too it is with Tony Cingrani, a simple man who only wants to throw 90 mph fastballs. Until fate demands more:

I love this clip because Cingrani, alone among the 41 pitchers, is legitimately upset that his incompetent teammates have forced him into menial labor. He doesn’t want to break the rules. He doesn’t want to catch the ball. Dishonor has been thrust upon him. He catches it–the purest response to the 2016 Cincinnati Reds would be to let it drop–because at some point under pressure, people cease to be baseball players and become mere men.

“That’ll be a fine in the kangaroo court, have to believe. Showing up the infielders like that?”

It’s fun to catch a baseball. If someone were to call me up and offer to hit fungoes to me for half an hour at the park, I’d take them up on it. So it’s easy understand why pitchers want in on the action from time to time. Like Alex Claudio, who in this play was perhaps emboldened by his shared 42 jersey to act like a real infielder.

Claudio does fine until the ball spills out of his glove a second later like a Twitter meme in real life. It rolls to the feet of the best possible recipient, Adrian Beltre, whose words of wisdom are sadly obscured from potential lip-readers by the sagging shoulders of Claudio.

You can see it in the bounce in his step, the poise. He reacts to the catch like a college freshman reading Siddhartha for the first time and excited to chat up some coeds. Ryan Flaherty does not have time for that bullshit, or really for joy in general. Ryan Flaherty’s quest for enlightenment began and ended with a single tenet: corner infielders catch infield flies. Fin.

“With four infielders, it’s the pitcher who wants to catch the ball, and his teammates are mystified, stupefied, and horrified.”

An offshoot of Archetype 3, the exclamation point is somewhat more forgivable under baseball’s complicated morality. Instead of making a catch for mere personal glory or flippancy, in this case the motivation is to punctuate a performance. It’s an act of domination by pitcher over hitter, similar to a strikeout, an announcement that the other eight men are there only to watch his defeat.

2016 contains only one example of this rare subset: Kenley Jansen, who capped off a save and a victory by seizing the prize that was so rightfully his.

In this case, his teammates are all smiles; the outcome of “successfully completed a victorious ballgame” easily overrides the outcome of “got in the way of the third baseman catching a baseball.” Vin Scully is perhaps less enamored by Jansen’s vehemence, but even by the end of the sentence his voice is warm with winning. It forgives all.

There is an exception to every rule. Draw two lines on a mental image of an infield, radiating out from the mound, splitting the first baseman and catcher, reaching all the way to the stands. In this area of the field, the pitcher simply has the easiest play on the ball, resulting in a large number of pop-ups caught by pitchers at or around the halfway mark of the basepaths on each side. One could argue that the beauty in baseball lies in these hidden places, the spots on the field where bunts can actually be valuable, where inside-the-park home runs still dwell.

The greatest catch of 2016 among this category belongs without a doubt to Rays starter Drew Smyly. The dangerous lefty doesn’t waste time skypointing or shouting; instead he breaks for foul ground and gets there just in time, converging with Logan Morrisonnearly simultaneously. Smyly not only makes the grab, he fulfills the dreams of many a fan, hitting Morrison in the head not once but twice, from different directions, as he falls.

For those interested, the following is a breakdown of all 41 events, based on both objective and subjective criteria:

Please note that the limitations of camera work may have obscured some reactions by both pitcher and catcher, and that the interpretation of the positivity of the announcers is mine alone. Statistics are human because we are human, and the heart lies. I apologize for this.

For all the hand-wringing over the fall of the hitting pitcher, this study really underlines the heavily diminished expectations that pitchers must live with. They are rarely called upon to make one of the simplest defensive plays possible, and the reaction to accomplishing this is, as the chart above proves, surprisingly positive. Part of this is the reality of the crushing level of repetition that is baseball, and the beauty of literally anything that only happens, league-wide, three or four dozen times a year. Baseball is repetitive in part to make the special things feel special, the triple plays and the no-hitters and even somehow the cycles. They’re the pumpkin beer, the elementary school field trips, the shamrock shakes.

A pitcher caught a baseball, literally something they ask children to do in pre-game prize contests. And yet Brian Dozier, who also catches countless baseballs and wears the same silly clothes, is endlessly amused.

It’s strange to me. In football the quarterback is equally separate from his comrades, and yet quarterbacks are still asked to run and get hit and even try to tackle people after interceptions. They’re leaders, but they’re not generals, like they’re sometimes called; they’re more like sergeants. In baseball, you’d think the pitcher would have that same commanding role: He’s the most vital member of the defense, centralized and elevated, and yet once the ball is in play his role is diminished as much as the situation allows.

Pitchers should fight back. They should take back the pop flies that they can. They’ve already lost the right to hit, or at least practice it sufficiently, all in the name of specialization. It’s time they stop letting the invisible hand push them around. It’s time to fight back.

You need to be logged in to comment. Login or Subscribe
dgalloway15fish
This is a fantastic article. We pitchers are athletes
Reply to dgalloway15fish
lipsgardner
Great article. I didn't realize that the pitcher catching a pop fly was such a rarity. I guess it kind of makes sense though. The pitcher is typically watching exactly where the pitch ends up and all of the other fielders are more so reacting to where the ball may end up, giving them a leg up on the initial read of the ball off the bat. And add in the fact that a pitcher has to traverse the pitching mound while looking straight up in the air, whereas the other infielders are working on flat ground. Yet after all that, the pitchers were successful on 41 out of 41 tries. What was the overall success rate of the rest of the league?
Reply to lipsgardner