With our dear Editor-in-Chief leaving Baseball Prospectus for his next chapter, we wanted to highlight some of our favorite chapters of his career here. There's an incredible number of timeless Sam Miller articles to choose from, but we whittled it down enough to not break the internet. This article originally ran on July 15, 2013.

I feel like we've been dancing around this for a while. The Tweeters at AT&T Park. The probably dead A's fan. All of these people. It's pretty clear that loads of people attend baseball games but nobody actually watches baseball games.

This was something I never noticed until I did, and now I notice constantly, just like how I can no longer not notice that pitchers have absolutely no idea where they're throwing the ball. The other day I suggested that nobody in a park (except the scouts and, in some cases, the manager) actually watches 10 pitches in a row. Well, then.

This is the third inning of the Diamondbacks and Brewers on Friday. I chose the third inning because everybody should have had time to get settled in, and nobody should be too bored or tired. I chose the Diamondbacks and Brewers because the game has playoff implications for the home team, so fans should be reasonably interested in the outcome. Also, because the game was close enough that nobody should have really checked out who wasn't already interested in checking out. Our focus is on 15 individuals, each of whom occupies an extremely valuable piece of real estate: (Seat 16 is not a real seat and is thus included only to observe the constant flow of traffic in and out of it, not for any statistics.) The club level tickets cost $120 per in Arizona, but so far as I can tell this is a tier better than that. Let's just assume that each one costs, oh, $450,000. These fans paid nearly a half million dollars apiece to be near this game.

So, treating the first pitch of the third inning as Pitch 1, here we go. 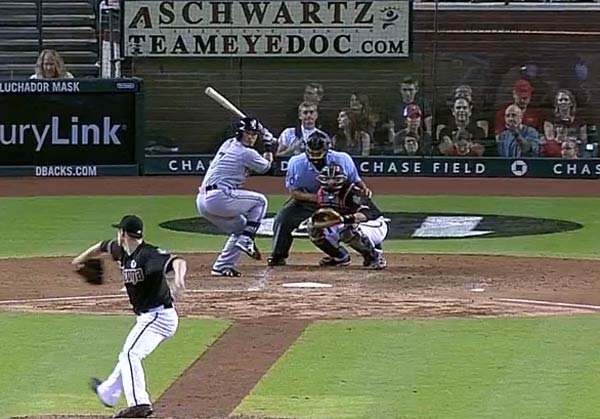 (Quick note on methodology: in some instances, fans are blocked. They are given credit for viewing the pitch. Absent fans are not. And I tried to be extremely liberal in counting a viewing. If the fan is facing forward, he or she is generally given credit.) We are three pitches in, and a third of our group has seen every pitch. I'm actually surprised by how high this is. We have relatively dedicated fans here tonight. Three pitches! Can you even imagine watching three pitches in a row at a baseball game you paid to attend? I'm sleepy thinking about it. So 20 percent of fans capable of watching four pitches in a row. 1 in 15 fans watches five pitches in a row thrown by a hometown rookie phenom under reasonably tense conditions. There are four, maybe five people watching this pitch. So there we have it. The most pitches anybody can watch in a row is eight. And, while it's not a perfectly straight line down, we do seem to see lower attention paid to pitches the further from the start of an inning we get. The first three pitches were watched by eight to 10 fans, out of 15. This is the ninth pitch of an inning, and of the 14 fans we can see (no. 13 being, as she often was, blocked by the right-handed batter) there are six people watching. That is, I would say, counting generously: fans 7 and 10 are staring off somewhere uncertain, but it's too close to exclude them. Even the lady in red has turned her back on the game. Somebody asked me the other day what age is a good age to start taking kids to baseball games. The girl in the front row, on the left (her left), was so much as facing the field one time.

I didn't know when we'd run out of active participants, so I prepared and counted for 19 of these. Here are the final stats for all 19:

And, yes, I'd have to be pretty dumb indeed not to notice the significance of doing a piece about not watching baseball while aggressively watching the non-baseball parts of the screen. Congratulations on noticing the significance, too!