The Texas Rangers have had a good season. They have the best record in the American League and have pretty much nailed down the Western Division title. But as BP alum Rob Arthur pointed out recently at FiveThirtyEight.com, they have an absurdly/unsustainably good record in one-run games, 34-10 through September 16, suggesting that they’ve been fortunate to accumulate their total of 88 wins through that date. Our third-order winning percentage, which calculates team wins and losses using projected runs scored and allowed, adjusted for opponent quality, agrees. It pegs the Rangers as a sub-.500 team, trailing the Mariners and Astros in their division, out of the postseason.

Rangers fans would counter that the team’s one-run-game record is legitimate, as it’s the product of a good bullpen (quantifiable though questionable, as the Rangers have the worst reliever ERA in the league and have allowed the second-worst OPS+) and heart/guts/confidence/whatever (unquantifiable). How lucky, in fact, are records in one-run games?

To answer this question (admittedly, it’s been answered before) I looked at every team season since the advent of divisional play in 1969. I paired each team’s record in one-run games in a given season with its record in the following season. For example, I compared the White Sox’s 24-36 record in one-run games in 2013 with their 28-24 in 2014, and their 2014 28-24 with their 2015 29-30, etc. If performance in one-run games is a skill, there should be a correlation from one season to the next, since teams that do well one year should retain that ability in the next. On the other hand, if one-run game performance is more random, there should be very little correlation.

Very little correlation has it! The correlation coefficient for team winning percentage in one-run games from one year to the next is 0.05. Remember that correlations run from 0 (not correlated to all) to -1 or +1 (perfectly correlated). A correlation of 0.05 means that there’s virtually no measurable consistency in one-run game performance from season to season. From 1969 to 2015, the team with the best record in one-run games is the 2012 Orioles, who were 29-9. If that’s indicative of a trait, it was pretty short-lived; the team’s one-run game record was 22-22 in 2011 and 20-31 in 2013. Similarly, the team with the worst record in one-run games in the divisional era, the 11-32 1999 Royals, were 17-16 the year prior and 21-26 the year following. Whatever character or determination the 2012 Orioles had, and the 1999 Royals lacked, wasn’t evident the year prior nor the year following.

So we can safely throw team record in one-run games into our luck bucket. What other measures, sometimes attributed to intangibles but derided by statheads, are similarly poorly correlated from season to season? I’ll list them in the order I considered them.

Batting average with runners in scoring position. You probably remember that the 2013 Cardinals set a record by batting .330 with runners in scoring position en route to the National League pennant. They’d batted .264 with RISP the year before and .254 the year after. Random? It appears so; the correlation coefficient for batting with RISP is 0.31. For pitchers—i.e., batting average allowed with RISP—it’s similarly low, 0.30. So we’ll add this to our luck bucket.

BABIP is an example of this. The year-to-year correlation of team BABIP is 0.41 for both batters and pitchers. That’s kind of high. So I’m disinclined to consider BABIP a prime indicator of team luck. But that doesn’t mean it’s not an indicator of individual luck. Last year Miguel Sano had a BABIP of .396, while Albert Pujols’ was .217. It’s not a surprise that their batting averages have gone in opposite directions this year, just as it’s no surprise that Rick Porcello (.332 BABIP allowed in 2015) and Zack Greinke (.229 BABIP) have seen their fortunes change in 2016.

Home run/flyball percentage. Like BABIP, there’s reason to view a very high or very low HR/FB as a fluke for an individual. But for teams, there’s a pretty good correlation from one year to the next: 0.58 for hitters and 0.47 for pitchers.

Strand rate. This is related, somewhat, to the won-lost record in one-run games, in that a good bullpen can boost a team’s performance in one-run games. The strand rate is the percentage of inherited runners scored divided by the total number of runners inherited by relievers. And, as it turns out, it’s almost entirely random, with a correlation of just 0.03. The 1995 Indians stranded 82 percent of inherited runners, the greatest proportion since the beginning of divisional play. The years before and after, they stranded 66 percent (both only slightly above the league average). The 1973 Braves managed to strand only 49 percent of inherited runners; they stranded 59 percent in 1972 and an above-average 66 percent in 1974. This performance suggests that the 1995 Indians were quite lucky and the 1973 Braves were quite unlucky.

RBI rate. BP’s OBI%, Others Batted In Percentage, is the percentage of the runners on base that are driven in. It’s a fun stat, I think; Coco Crisp, who’s having a poor season, is sixth in the majors to date, amid names like Murphy and Ortiz and Altuve and Arenado. But it’s somewhat stable, with a year-to-year average correlation of 0.42, so not a great indicator of team luck.

Left on base rate. This measures the percentage of batters reaching base who don’t come around to score. The formula is (H+BB+HBP-R)/(H+BB+HBP-1.4*HR). A high LOB rate could be an indicator of bad luck on offense but good luck for pitching. But it’s not a super-strong indicator. They average year-to-year correlation is 0.36 for batters and 0.35 for pitchers. That’s not very high, but it’s not low enough to say that it’s random luck for these purposes.

So my indicators of luck are (1) record in one-run games, (2) batting average with runners in scoring position, and (3) strand rate. To those I’ll add (4) opponents’ won-lost percentage, since that’s a built-in advantage or disadvantage.

I then set about constructing a Franken-stat (a wonderful term I’ve appropriated from Russell Carleton, who generously provided technical advice) encompassing these factors. I’ve been enamored of Franken-stats that combine disparate baseball metrics ever since I read Bill James’ World Series Predictor (and promptly learned a valuable lesson in not betting on baseball). Admittedly, this isn’t an elegant answer to the “who’s lucky” question, but I wanted something easily calculable based on defensibly lucky metrics. Here’s how I combined the luck indicators:

· Strand rate: I compared each team’s strand rate to the league average and expressed the resulting difference in percentage as a whole number. The aforementioned 1995 Indians stranded 81.6 percent of inherited batters compared to a league average of 64.7 percent. The resulting score of +16.9 is highest since 1969.

· Opponents’ won-lost record: I compared each opposition W-L to .500 and expressed the difference as a whole number. Teams playing the 2002 Twins had a .471 won-lost record, the lowest since 1969, giving Minnesota a score of +28.9.

· Batting with runners in scoring position: In order to account for good- and bad-hitting teams, I calculated the difference between each team’s batting average with RISP and its overall batting average, expressing the difference in points as a whole number. The leader, unsurprisingly, is the 2013 Cardinals, who hit .330 with RISP and .249 in non-RISP at bats, a luck value of +80.7. The luckiest pitching staff: The 1998 Astros, who allowed a .268 batting average when there were no RISP overall but only .217 with RISP, +50.9.

Given those definitions, here’s the formula I derived:

· Their opponents had a .492 winning percentage. That’s worth 7.5 points. Multiplied by two, that’s 15 points.

Adding those together, the 2015 Braves had a Luck Index of 72, which turns out to be pretty high. They were a lucky team.

Before going any further, I wondered whether this metric had any validity. I did two reality checks. First, I looked at the distribution of Luck Indices. I’d expect a normal distribution centered around zero. Since there are 1,288 team-seasons from 1969 to 2015, the sample size is more than adequate. Here’s the distribution: 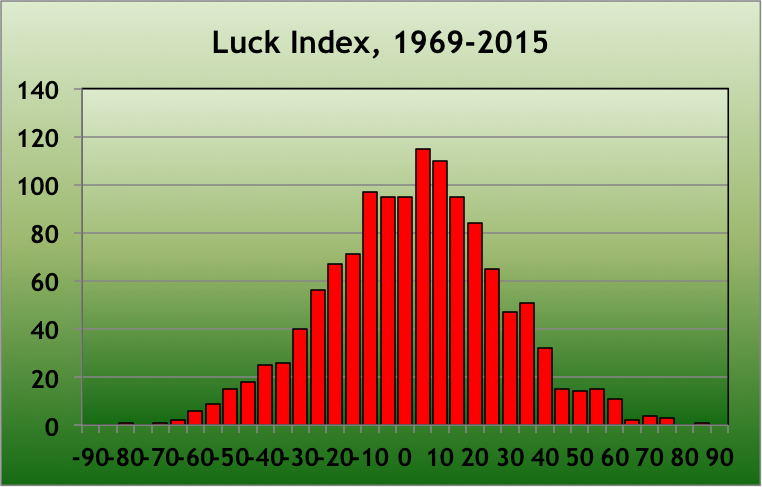 Pretty good. The mean is right near zero (0.1, to be exact) with a standard deviation of 25. A team with a Luck Index above 25 or below -25 was somewhat lucky. Once you get plus or minus 50, you’re talking really lucky.

Second, recall the link at the top of the article to BP’s third order winning percentage calculation. (Here’s the link again.) The column labeled D3 is the difference between projected and actual wins. That difference comprises a lot of factors—sequencing, scoring, opponent quality—that likely contain a measure of luck. We don’t think of D3 as a measure of luck itself, but it certainly subsumes components of luck. So there ought to be some correlation between the Luck Index and D3. And there is! The correlation is 0.58, which is decent. Incidentally, this is one of the reasons I didn’t add LOB Percentage to the Luck Index. On one hand, I was worried about overfitting, and on the other, it barely moved the correlation.

So let’s go with it! (In my next article, I’ll go over the 10 luckiest and unluckiest teams in the divisional play era.

You need to be logged in to comment. Login or Subscribe
CrashD
Good stuff! Now: your hypothesis, which is that there should be year-to-year correlation, you disproved. But bullpens turn over fast, so a reason the one year hypothesis failed might simply be that bullpen arms burn out fast. If there is an organizational component to this particular luck, such as bullpen management, it might be manifest over a longer time period, say 3 to 5 years. There would be several possible outcomes to this. To name just one, some managers might ride a hot bullpen one year until the arms burned out, the hottest arms left via free agency, or both, and next year there's nothing left. Others might prefer to bring their closers up slowly through the ranks, like Mariano Rivera. So keep going with this, and, thanks.
Reply to CrashD
mainsr
Thanks. When I thought of bullpens, I thought of the O's, since I think that bullpen management is one of Showalter's real gifts. Yet, as I pointed out, their 1-run W-L has been all over the map. But I checked, and their strand rate has been pretty consistent over the years, so the data may be colored by teams more prone to management/personnel changes. The O's are clearly exceptions to the rule, I suppose. Interesting observation.
Reply to mainsr
I75Titans
Interesting article! I love a good cliff-hanger.
Reply to I75Titans
medman
Thanks for your evaluation of luck in baseball. But I don't buy the suggestion that lucky teams would show consistent success (or failure) in one run games from year to year. You evaluated if a consistent relief pitching staff between seasons would result in consistent luck, and showed it not to be the case.

There are obviously many reasons a team might be lucky any given season, including:

All of those should be measurable.

And then there are "intangibles" such as confidence and team chemistry which are not quantifiable.

I do not doubt that "luck" exists in baseball games. A grounder just out of reach of an infielder, a missed ball/strike call by an umpire, an injury to a key player, etc. So not every factor involved in luck is quantifiable. But I think that there are factors that could be evaluated to help explain the outcome of close games in a single season instead of lumping them all into one "luck index."

I am looking forward to reading your assessment of the luckiest and unluckiest teams to see how they performed post-season. Thanks again!
Reply to medman
mainsr
A couple responses, Medman:

Re one-run games, I may not have expressed myself well: I'm contending that teams do NOT show consistent success in one-run games from year to year--that's incontrovertible--and that therefore those random fluctuations are due to luck, which of course is just my contention. I do feel pretty strongly that in baseball, those items that are random are probably luck. But again, that's just my contention.