On June 29th 2014, the Red Sox announced that they would be calling up 21-year-old Mookie Betts, whom they had taken three years earlier with their fifth-round pick in the 2011 draft. As excited as I was see Betts attempt to live up to expectations—at the time, he’d been hitting .346/.431/.529 in a season split between Double- and Triple-A—I was even more excited to make bad Mookie Blaylock jokes on Twitter. Truthfully, I just didn’t expect the Betts hype train to ever arrive at its final destination.

Two years and a handful of weeks later, the joke is on me. Betts isn’t simply is having a banner year with the Red Sox—a campaign in which he has continue to slowly build upon his previous years in the majors built upon his previous upon each year in the majors—he’s setting milestones. He joined teammate David Ortiz in the 30-100 club this season, along with a very short list of Red Sox greats who have done so before age 25.:

Betts is crushing even the highest expectations set for him, all for a team that has baseball’s best offense in baseball and fine odds of producing another red October on Yawkey Way.

And all from that cute-as-a-button frame: 5-foot-9 and just 180 pounds. Baseball history generally tells us that it just isn’t likely that someone of that build, no matter his baseball acument, could possibly hit for as much power as we’ve seen Betts hit for.

In this year’s 2016 BP annual, Betts’ player comment says that he “showed off more power than most thought he possessed.” That was in 2015, when Betts hit 18 home runs and slugged .479. Baseball still has three solid weeks left of play, and through Tuesday, Betts is slugging .550 and has more home runs than Mike Trout, than Anthony Rizzo, than Yoenis Cespedes. (He has three more than Buster Posey and Brandon Belt combined.) And this isn’t one of those Boston power flukes, like Jacoby Ellsbury or Bill Mueller’s spikes. Betts’ power numbers have been climbing from season to season, outdoing the already high expectations set forth for him.

Take a look at Betts’ slow but sure progression over his time in the majors:

Betts’ strikeout rate has always been surprisingly low for only having three years of major-league experience under his belt, and while his walk rate has gradually gotten lower each season, his power numbers have increased, and now Betts has the second best slugging average and ISO on the Red Sox juggernaut offense, only behind David Ortiz. (Fun fact: Betts hadn’t yet started kindergarten when Ortiz made his major-league debut.)

Betts currently is among the top 20 American League batters in ISO, and surrounding him are not exactly the type of guys you’d imagine him sitting at a table with. These guys are all major league veterans, they’re older, and they’re bigger than Betts:

By any measure but performance, Betts looks like the kid eating at the grownups table. But he possesses not only the talent to post comparable numbers to these sluggers, but something that has recently eluded this group: speed. Betts is hitting for power, he’s getting on base, he has the speed to extend his hits, and he’s striking out at significantly lower clip than these hitters, with the exception of Cano. His low walk rate, much like Cano, is compensated for by the fact that he’s still getting on base at the third-highest rate of these five players.

Betts’ approach at the plate isn’t characterized by patience, and if anything he has become less patient, seeing fewer pitches per plate appearance each season as he ambushes early strikes. (The one season he did walk at a nearly 10 percent clip, he had the highest OBP of his career—but the lowest slugging percentage.) His approach is characterized by using his good eye at the plate to exploit his power.

Meanwhile, he has sharpened his ability to cover the entire plate. Take a look at the progression in Betts’ slugging maps from 2015 to 2016, first on hard pitches: 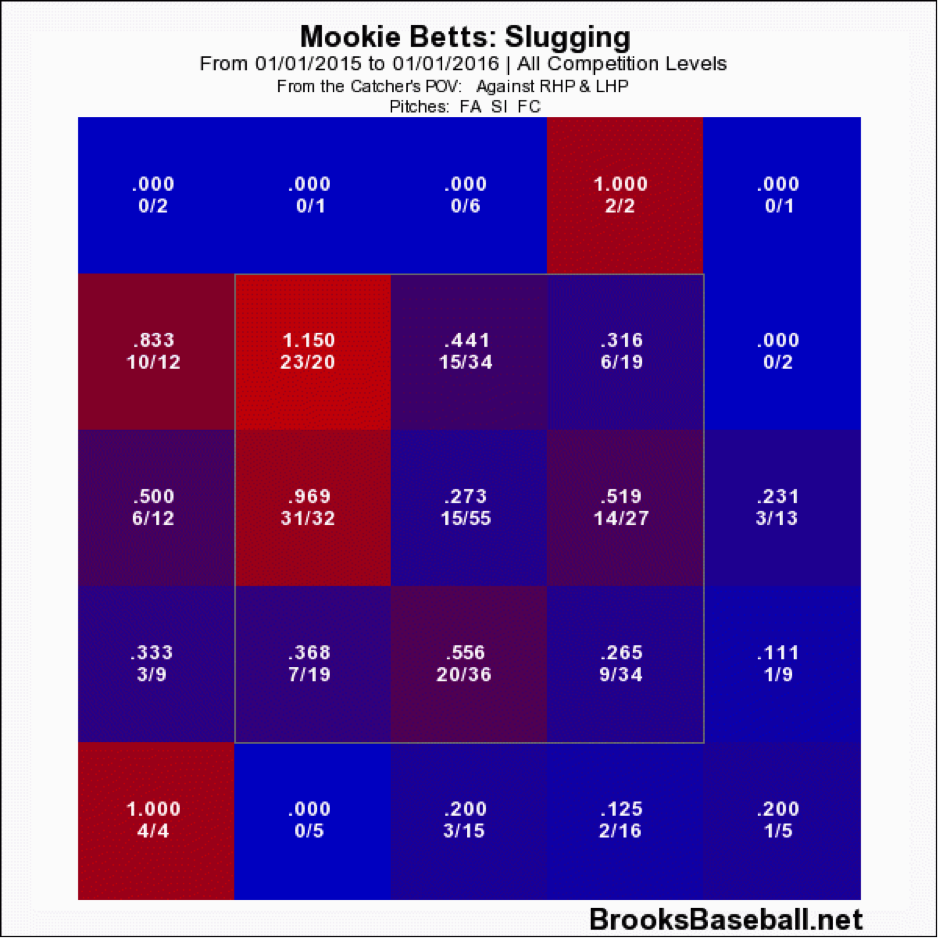 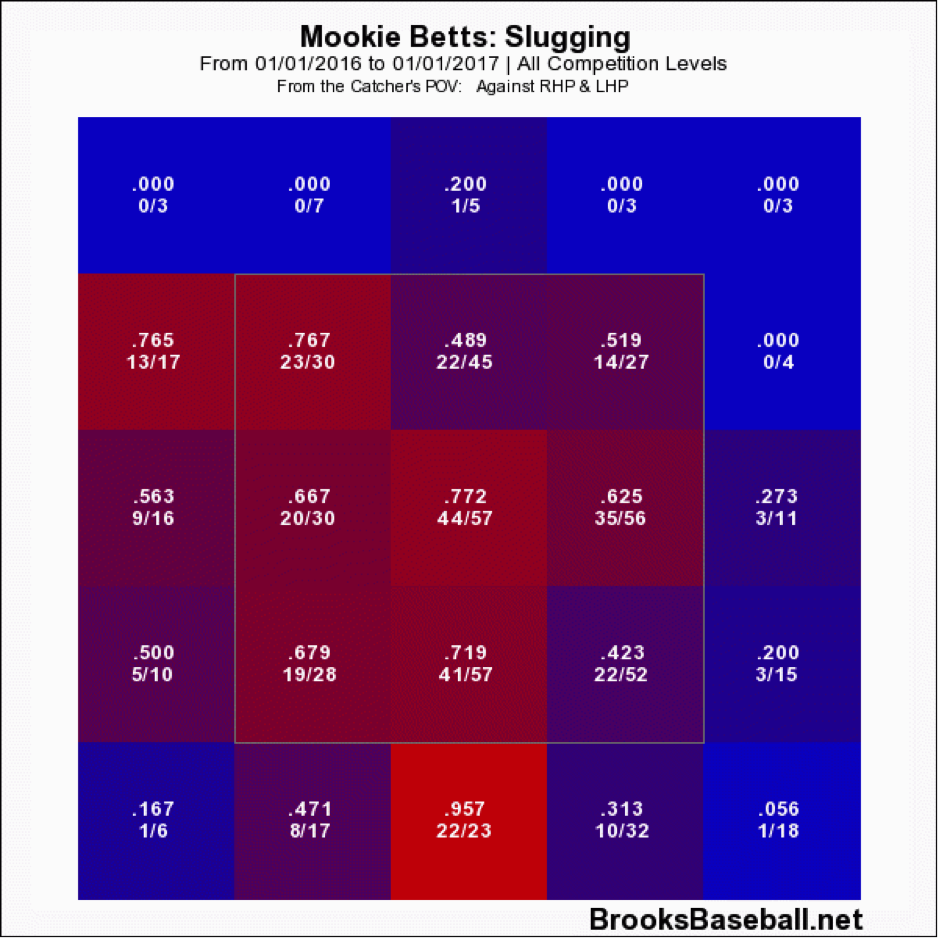 And on breaking pitches: 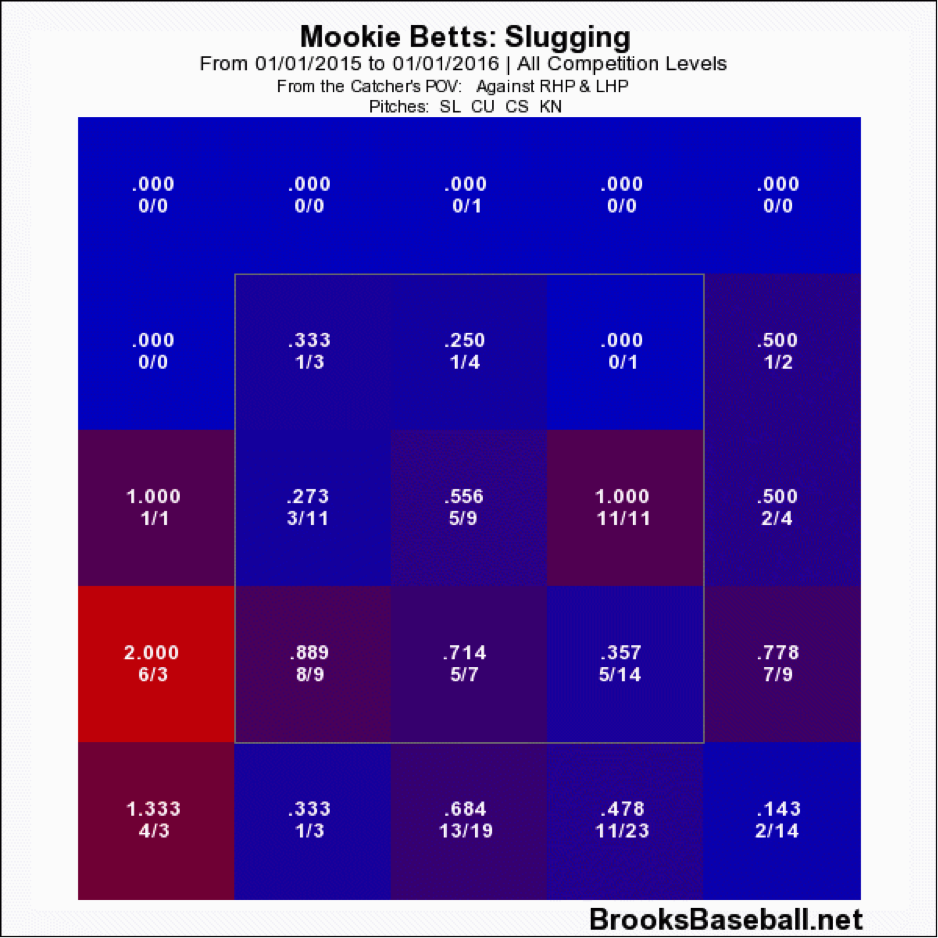 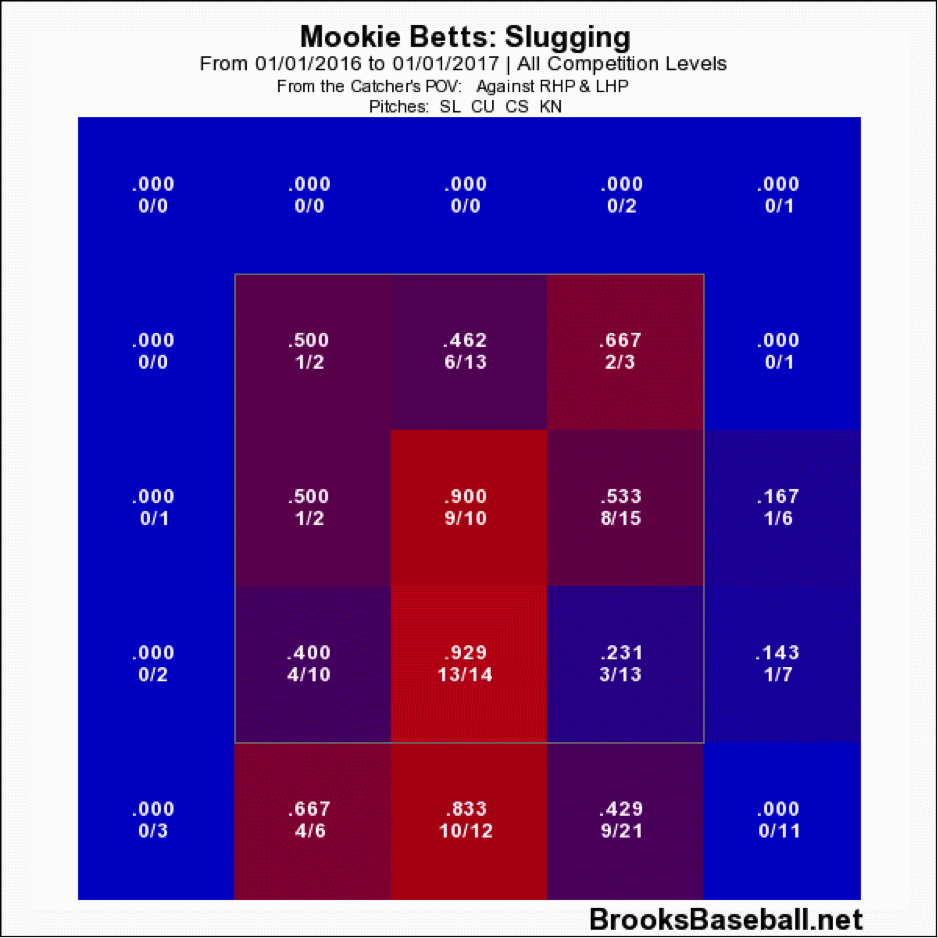 Now, to say that Betts struggled against either type of pitches in 2015 wouldn’t exactly be true, Betts simply improved his plate coverage from 2015 to 2016. The difference is night and day.

Betts’ candidacy for the AL MVP award is in limbo right now, hinging as much (more, actually) on the Red Sox’ team performance in these final weeks as Betts’ own. For now, he’s in the discussion as one of the most important cogs in baseball’s best offensive machine. But if Boston fades, Betts has got an entire career ahead of him. Just two years and two months into that career, he’s already shown the ability to continue improving, and to exceed the expectations set for him. Betts is proving the very concept of a ceiling wrong.

You need to be logged in to comment. Login or Subscribe
oldbopper
Nobody, and I mean nobody, has been on the Mookie Betts bandwagon any more than I have. Anyone who reads this blog has heard that from me since the first season I saw him live at Greenville. Why was there so much reluctance from scouts and other talent evaluators to believe what they were seeing? The power was there from the beginning! He hit 15, count'em 15 HR's between Greenville and Salem in 2013 at age 20. Does anybody in the game realize how difficult that is to do? That easily transtates into 25+ HR's in the show. There was a 3 game series in New Britain in 2014 in which he tore the cover off the ball, ran wild on the bases and hit a monstrous HR, while playing 2nd base. This spring, on this forum, I predicted a .310/.375/.500 line with 25 HR's and even that was an undershoot. I recall reports that his arm was only average. What were these people looking at? He has shown a gun while catching everything in sight. Another article said he would ALWAYS be in the shadow of Trout, Harper and Stanton. I will give you Trout, a center fielder, but the other two are not in his class this year. Forget the metrics, which claim to be objective but are not, Mookie Betts is the best right fielder in the game on both sides of the ball.
Reply to oldbopper