A highlight reel play often triggers a reaction based on what happens after the catch. Take three post-catch steps then dive headfirst into the stands, for instance, and you’ll earn a permanent place in the YES Network’s rolodex of Yankee highlight clips. For a more recent example, there’s Andrew Benintendi, who made a great leaping catch on August 22 while crashing into the short left field wall in Tropicana Field. A great home run robbing catch, yes, but if Benintendi makes a similar snag running into the left-center field gap, traveling the same distance and jumping the same height, nobody labels it a catch of the season frontrunner.

On that same night Robinson Cano did this:

There’s no collision with a fence or flashy sprawling dive, but Cano ranged into a part of the field where infielders seldom roam, some 240 feet from the plate into right field. It’s a play typical of Cano’s style in that it looks so easy it hardly registers as abnormal, thanks here to Cano’s reaction time, his situational awareness (knowing his right fielder, Shawn O’Malley, was shifted well into right-center), and good old foot speed.

Cano’s catch also got me thinking: what’s the furthest distance an infielder has run to catch a fly ball in 2016. Cano ran 111 feet to catch that ball, a distance that has to rank toward the top of the league . . . right? Wrong. Thanks to Statcast (and MLB.com’s heroic Matt Meyers for providing the data), we know that Cano would have had to run an additional 10 feet just to crack the top 10.

Here, then, are the top five distances traveled by an infielder to make a catch so far in 2016.

Notice first the face of Nick Hundley when he removes his mask and looks down toward first base. 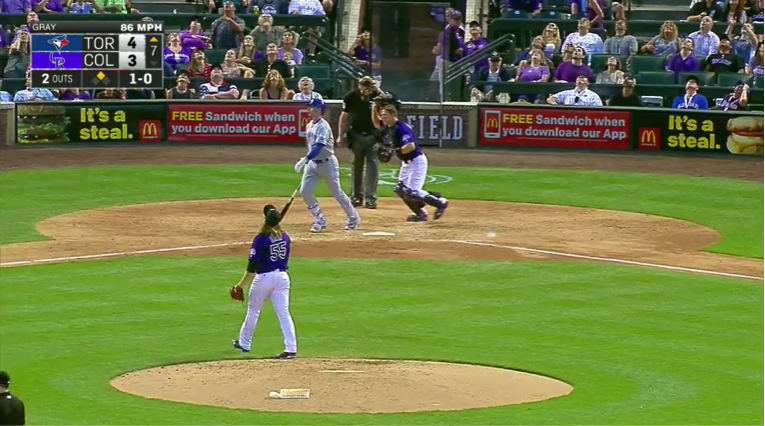 Then note the starting positions of Arenado and Reynolds. 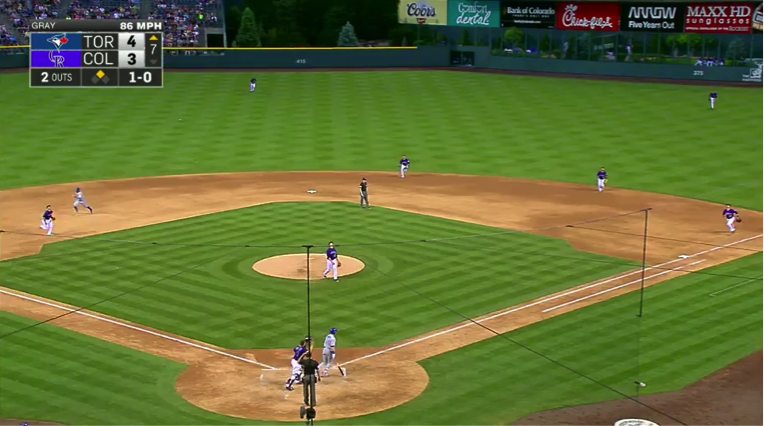 With some rough estimates of their initial positioning and help from Google Earth, Arenado started about 20 feet further from the ball’s final destination than Reynolds, plus he had to cut all the way across the infield and catch the ball on an angle he likely isn’t all that familiar with. That didn’t matter, of course, because unlike Reynolds and Hundley—and certainly Jon Gray, the pitcher—he wanted it.

Finally, note the expression of Reynolds once he grasps the situation, that the best defensive third baseman in the league resides on his team and is about to bail him out from another potential GIF-worthy moment. There’s a little “I had it all the way” in there, but that’s mostly just to save face. 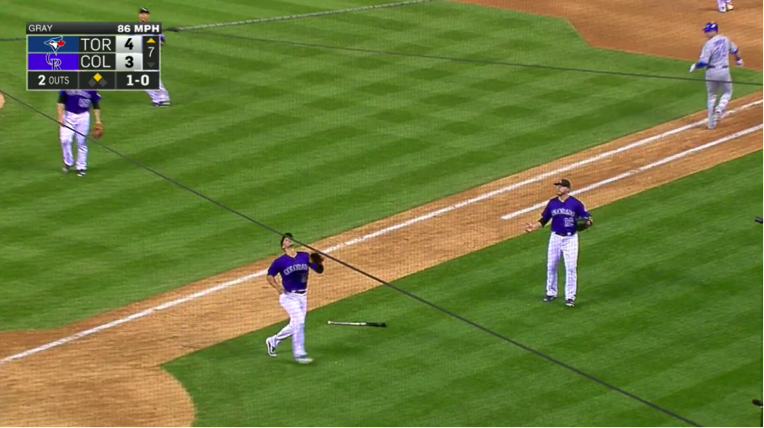 There’s a hot spot for these kind of catches—you’ll notice it more as we continue down the list—that exists symmetrically on both sides of the field, right near foul territory down the lines. It’s a sort of no-man’s land, too far for most corner outfielders to cover and outside any infielder's designated zone. 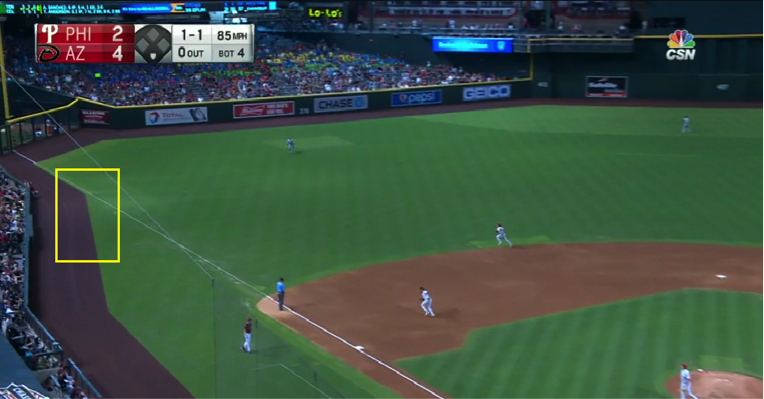 Fast and alert middle infielders use these opportunities as a consistent source of highlight (and non-highlight) material, though, and here Galvis covered 127 feet in approximately 6.1 seconds and almost overran this one.

One of the things you quickly understand about infielders running a long way to catch fly balls is that if Mark Reynolds isn’t involved, these plays aren’t always that interesting. This a really good catch, just like Galvis above, but it’s just like a fast guy running into a make-believe yellow rectangle to make a nice play.

After careful, Zapruder-style video review, I’m quite certain that Mondesi and Harrison traveled the exact same path to make their plays. Even the hang times were almost identical.

Sardinas gets bonus points here for having to deal with sliding rookie right fielder Patrick Kivlehan, who’s now best known for his cameo role in the longest running catch by an infielder all season.

The thing that piqued my curiosity about the Cano catch was just how strange it looked. It wasn’t so much how far he ran to catch the ball; rather, it was where he caught it, so deep into right field, in an area almost exclusively manned by the right fielder. The goal in looking at the rest of these plays was twofold: 1) to get some context around Cano’s catch in terms of distance traveled and 2) to see what far-running infielder catches look like, just from an aesthetic perspective.

What we’ve learned, I think, is that a large clump of far-running infielder catches look almost identical, mostly because of the layout of the field and the positioning of the fielders—there’s only so much area for an infielder to range to catch a fly ball or pop-up, and most of it exists in foul ground just outside the reach of most outfielders. Cano’s catch—even though less ground was covered—looks different because it was caught in fair territory and closer to the outfield fence than the others. If we ignore Arenado’s catch, the other four plays reviewed here involve middle infielders sprinting to a very similar point on the field. Exciting and good catches in their own right, but wholly unoriginal when viewed in succession.

Have we found the sort of theoretical limit for how far an infielder can run to catch a fly ball, and do all these plays look about the same? Who knows, but probably not. Why?

On Cano’s catch, Jacoby Ellsbury was batting. Ellsbury, like many hitters, pulls the ball on the ground but goes more neutral-to-opposite-field in the air. 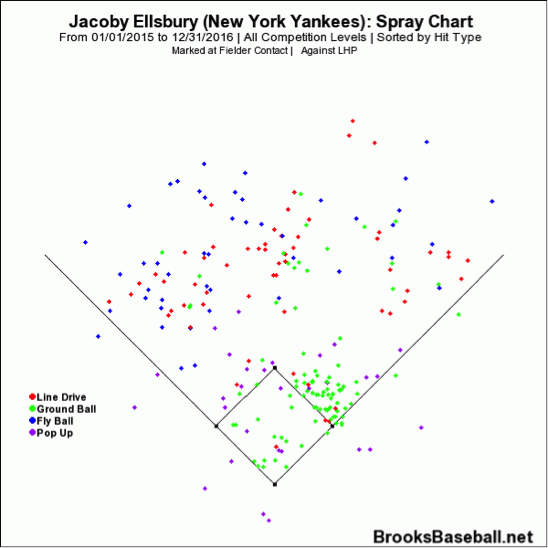 So the Mariners played him accordingly, positioning Cano smack in the middle of first and second while shading the entire outfield toward Ellsbury’s opposite way. Just after contact, it looked something like this, 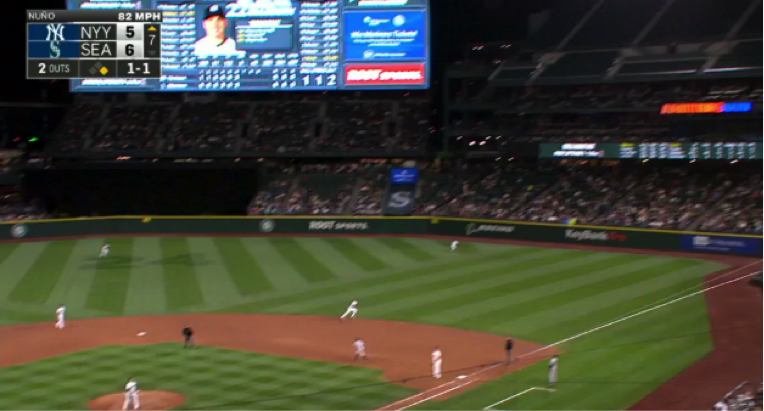 which put enough green space between Cano and O’Malley to allow Cano to make a play that otherwise ends up being a can of corn for the right fielder. Imagine a more extreme version of Ellsbury and a team willing to play him as such: Could an infielder one day catch a ball on the warning track . . . or even rob a home run? 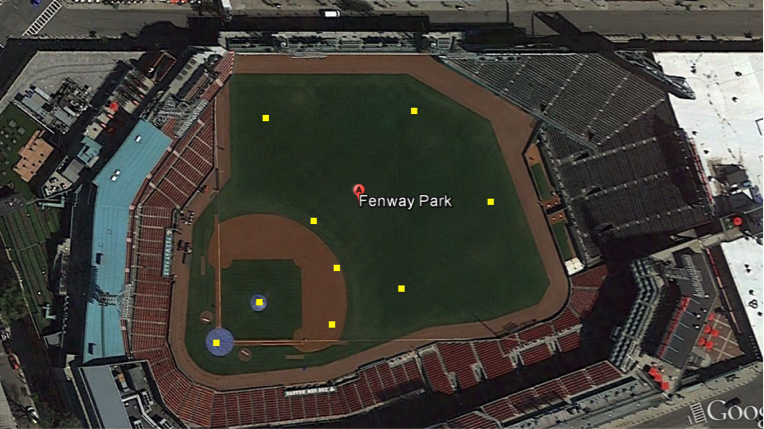 That defensive alignment, which isn’t far off from many of today’s extreme shifts, leaves approximately 125 feet from the “second baseman” to the Pesky Pole, which is 20 fewer feet than the left fielder’s route.

So long as the vast foul (well, yes, that foul too) expanses of the Oakland Coliseum are around, infielders will have the ability to run forever without artificial, man-made hindrances like walls and seats. 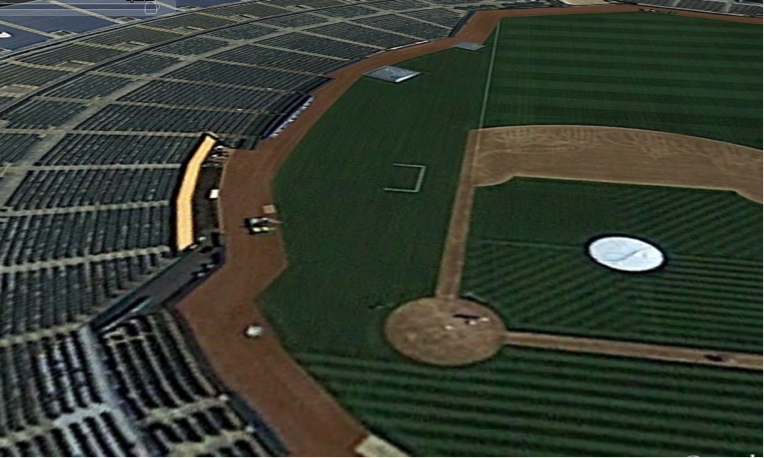 Someday an infielder is going to run 150-some feet to catch a high fly ball and crash into an outfield wall. It won’t be Mark Reynolds, but it’s going to happen.

That would be the right fielder's route, correct? Barring a wormhole or something...
Reply to GBSimons
dutt22
No wormholes, but this hypothetical shift was so extreme that they switched the left and right fielders. (yes, of course, and thanks for the catch and for reading.)
Reply to dutt22
RJAnderson
Enjoyed this and most all your work here lately. Always unearthing interesting angles. Keep it up, man.
Reply to RJAnderson