On August 21, the Mariners lost 6-7 to Brewers after a sloppy, four-run ninth inning. If you missed the game and only looked back at the play-by-play, it might seem like a typical late collapse. You’d see that Tom Wilhelmsen pitched poorly (with Vidal Nuno faring only marginally better after him) and that the Mariners offense couldn’t muster up any runs in the home half. You’d see that they lost, and be happy or sad but probably indifferent, and move on to the next game. And if you did that, you’d have missed the inning’s weirdness. To be clear there was a lot of weirdness: an almost-robbed home run, Nori Aoki listening to circus music and failing to catch a very catchable fly ball in the outfield. But the greatest weirdness came a little later.

With two outs and the bases loaded, Jonathan Villar came up to bat. The play-by-play says he did this:

And he did, but that doesn’t capture what came after he flew out. That is just a normal fly out. This is what Chris Iannetta chose to do once Shawn O’Malley got the ball back to the infield.

Wait, what are you doing? Manny Pina got halfway down the line before realizing he couldn’t score and Scooter Gennett was almost at third when Pina decided to retreat. Nuno is pointing to Cano at second. Cano is calling for the ball. Kyle Seager is pleading with him to do something. All Iannetta had to do was throw over to second and end the inning. But instead, he let Gennett scooter speed back to the base, leaving them loaded for Keon Broxton. There’s a moment when the infielders all go still. Cano puts his hands on his hips. Why are we still here? Nothing in the baseball record books will make note of Iannetta’s odd decision; he wasn’t charged with an error. You can’t really even search for these things if you want to. They aren’t Play Indexable.

The actual Play Index (use Promo Code BP!) is an indispensable tool, and this piece does not aim to besmirch it. Asking a database to track frivolity isn’t realistic. How on earth would you ever record and categorize this look on Scott Servais’ face a few moments later as he considered his catcher? 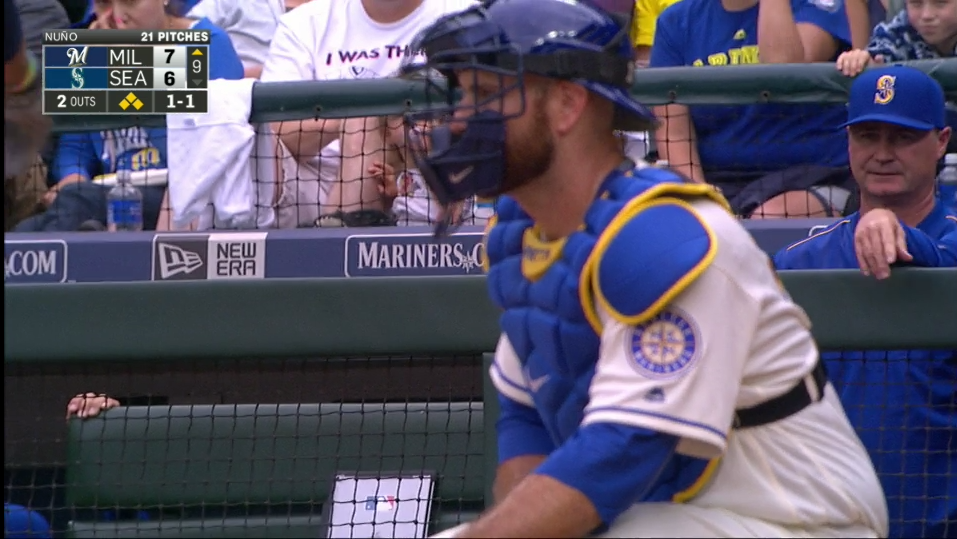 These outs are still outs; the stolen bases still stolen. Only they feel a little different. There is something very basebally to note here. They’re the oddities that inspire us to wonder how many times a baseball or a baseball man has ever moved this particular way or done that particular thing before. They’re the equivalent of wearing plaid and stripes at the same time, and they ought to be documented, these weird plays, because they make for fun and tremendous confusion when seen in person. And so, at the request of absolutely no one, here is the Weird Play Index. This is the Baserunning Edition.

Escaped Rundown
In a rundown, the expectation of survival is pretty low. You’ve either made a mistake, and are simply delaying the inevitable, or you’ve made a “mistake,” you wily veteran, and are trying to stall long enough for your teammate to do whatever it is he is doing. The running around has its purpose (you don’t want to just give them an out) but you aren’t necessarily counting on it to work. Except sometimes it does!

In one version, you just feel lucky to get back where you were, like when Coco Crisp managed to juke his way back to first. You were sort of silly and almost got picked off, but you salvaged it. You made it. You get to go back to first.

You think you’re a dead duck, but you actually get to escape and thrive. Jean Segura doesn’t get a tag on you. Your helmet comes off on your way into second but you’re not here to complain. Just look at that face. You feel lucky to be here at all.

The Artful Dodger
Watching a runner steal a base always has a certain amount of drama. Depending on what part of the field is shown on the broadcast, you either have the slow, simmering anticipation as you watch the runner take his lead, followed by the the quick release of speed as he goes from not-running to running, or you have the starter’s pistol of the play-by-play guy’s voice declaring “Runner goes!” before the runner streaks into the frame. The drama is focused on velocity, and whether it will be enough to get past the speed of the throw or the tag. We might be exceptionally impressed with that speed, it might be unusually zippy for a baseball play, but it has units of measure we understand. But sometimes, a stolen base introduces another component more important to its achievement than speed: eluding the tag.

The ball gets to Daniel Murphy with plenty of time. Rizzo should be out comfortably and the Mets should be feeling confident and smooth. Except Rizzo stops stealing a base and starts doing a little Cirque du Soleil, precisely and carefully moving his feet and contorting his body to avoid Murphy’s tag. He’s a circus act; he’s Houdini. He can’t believe he did it. First basemen make notoriously poor acrobats. 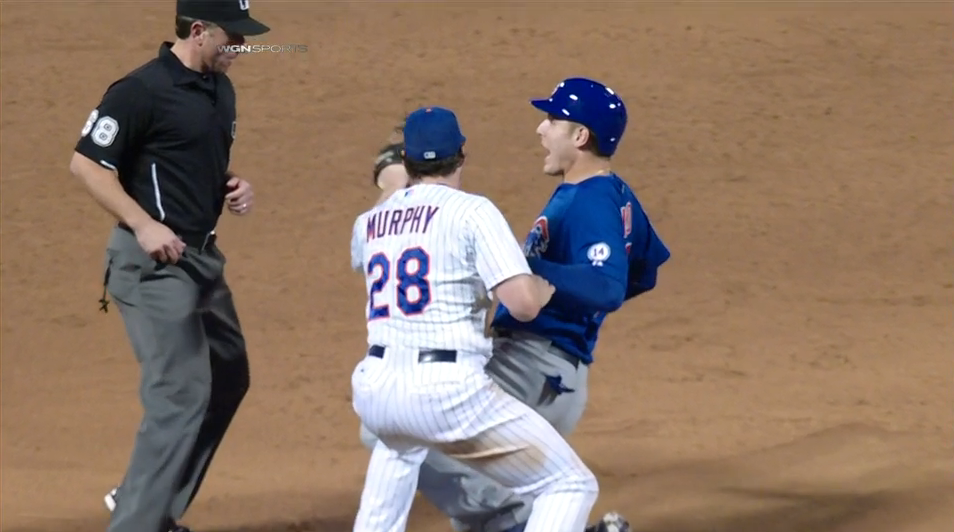 Or look at Rougned Odor against the Red Sox.

The Overslide
Getting caught stealing is about not getting what you want. A player goes on the wrong pitch; they aren’t fast enough. It’s a failure of athleticism, or of imagination, or of judgment. Sometimes it is really close. Sometimes you’re out by a few feet. The play ends and you head back to the dugout, mad you couldn’t swipe the thing you wanted, but resigned to the fact you never really had it in the first place. But the overslide? It’s a different category of thing, existentially distinct.

You had it, Drew! You got a good jump! Hell, Brandon Crawford fell over. That’s how much you had it. One minute, you’re sitting pretty, having one thing (first base) and about to steal another (second base). You’re about to have two whole things. You’re about to put yourself in scoring position late in a tied game. You’re ready to be a hero. And then, suddenly, you have nothing. Not because you were too slow, but because you were too fast. You went at it too hard, went in too strong. You were too good and burned too bright. You were all fire and no finesse. 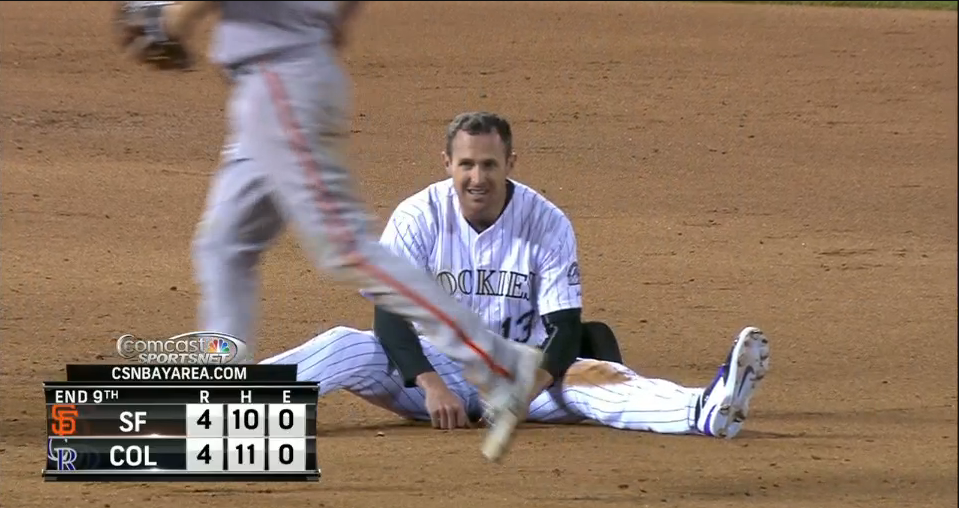 Two runners on the same base
Recently, I was talking with someone about how difficult it is to make new friends as an adult. When you’re a kid, your life is scheduled and organized by people who are, by virtue being much older and able to read and drive, smarter and more useful than you are. Your parents make your playdates, drive you there, and bring snacks. All you have to do is not die, and share your toys, and not violate any of the weird, fickle rules of kid code, and you have a friend. The activities are predetermined, and the range of potential outcomes is mostly set, and even if there is some silliness or someone eats crayons, you know that your folks are picking you up before dinner.

Adult friendship isn’t like that. You have to improvise, and find your people, and once you’ve found them, you have to make plans. Plans make you realize all the logistical nonsense your parents put up with so you could go to the zoo. You make them so you don’t have to wait an hour to be seated at a restaurant on your birthday. They structure your social life. Or at least, they’re supposed to. Because what you realize when making and keeping adult friends is that, freed from their parent’s minivan and allowed to spend money they made themselves, people are pretty unreliable. They show up late or early, but not when the plan says. They’ll apologize, but in a perfunctory way that says more than the apology itself. You had a plan, and then suddenly, through a series of unfortunate events, you’re standing at third base, on a hot July day, with Mike Zunino furiously tagging you, yelling “OUT, OUT, OUT,” wondering why Kevin Pillar couldn’t just stick to the plan. And then you fall down. 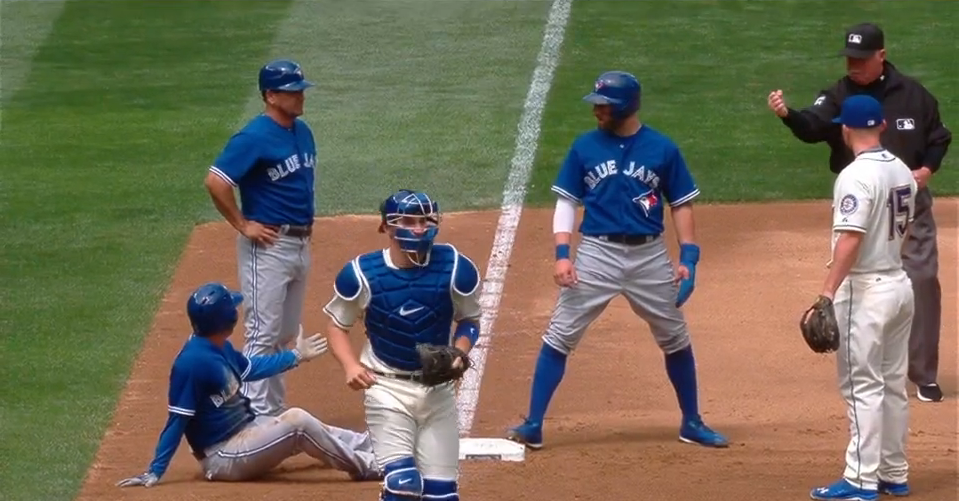 Additional entries in this category: Passing another runner on the basepaths; Catcher overthrows that allow runners to advance an additional base when they should be out at second; Rundowns escaped while another runner steals home; Runner getting hit by the ball multiple times on one steal attempt

You need to be logged in to comment. Login or Subscribe
Deadheadbrewer
I always love your columns, Meg! By the time I got to "Now we're never getting seated," I was literally laughing out loud, and I don't use the word 'literally' loosely.
Reply to Deadheadbrewer
kenfunck
Great piece, Meg.

My favorite baserunning weird play that I watched live (on TV) was Carlton Fisk tagging out both Bobby Meacham and Dale Berra at home on the same Rickey Henderson single. Rickey launched one into the gap in left-center with Meacham on second and Berra on first; Meacham thought it might be caught, went back to tag, stumbled, and then headed towards and rounded third with Berra right behind him. Ozzie Guillen's relay throw beat them both by a mile, and Pudge tagged them both out.

Not sure if my favorite part is (1) watching Berra continue barreling forward like a punch-drunk club fighter even after Fisk has the ball and Meacham is out; (2) watching neither Meacham nor Berra actually ever touch the plate after Fisk's New England punch tags; (3) seeing Gene Michael half-heartedly throw up his arms after Berra rounds third, either as a late attempt to make it look like he tried to stop him or an involuntary "well, I guess Sir Isaac Newton is in the driver's seat now" shrug; (4) the fact Meacham had just entered the game as a pinch-runner, because that was his one skill (despite having been called out earlier that year for passing a runner after hitting a home run; or (5) the fact that through all this (at least if BRef is right) Henderson kept himself planted at first and never found a moment to scoot on over to second. Can't imagine another play in Rickey's career where he bounced one to the wall and wound up standing on first.
Reply to kenfunck
patnkeren
It looks like the third base coach gave a bit of a shove to the runner on third base, knocking him off the bag. Does anyone else see that?
Reply to patnkeren