It didn’t take long for the Nationals to plate what would be the deciding run in their series opener against the Phillies. They got that out of the way two batters into the game:

Jayson Werth was out in front of Jake Thompson’s 2-1 breaking ball, but he kept his hands back long enough to drive it over the fence in left-center field. Thompson would go on to complete seven innings for the first time in his young big-league career, but Tanner Roark logged seven, too, and he did so without permitting a run. Marc Rzepczynski and Mark Melancon took care of the rest.

While the Nats were happy to notch the 4-0 win, they might be happier in the long run if Werth’s power, missing in action throughout the first half of the season, is here to stay. After slugging just .401 through July 19th, the 37-year-old has rediscovered his thump over the past five-or-so weeks, hitting .270/.358/.548 in 134 trips before going yard last night. Monday’s homer was his third in four games.

Back in May, manager Dusty Baker thought Werth felt pressed to expand his strike zone because he was batting lower in the order, postulating that a move up to the no. 2 slot, where he is now, would suit the slugger better. 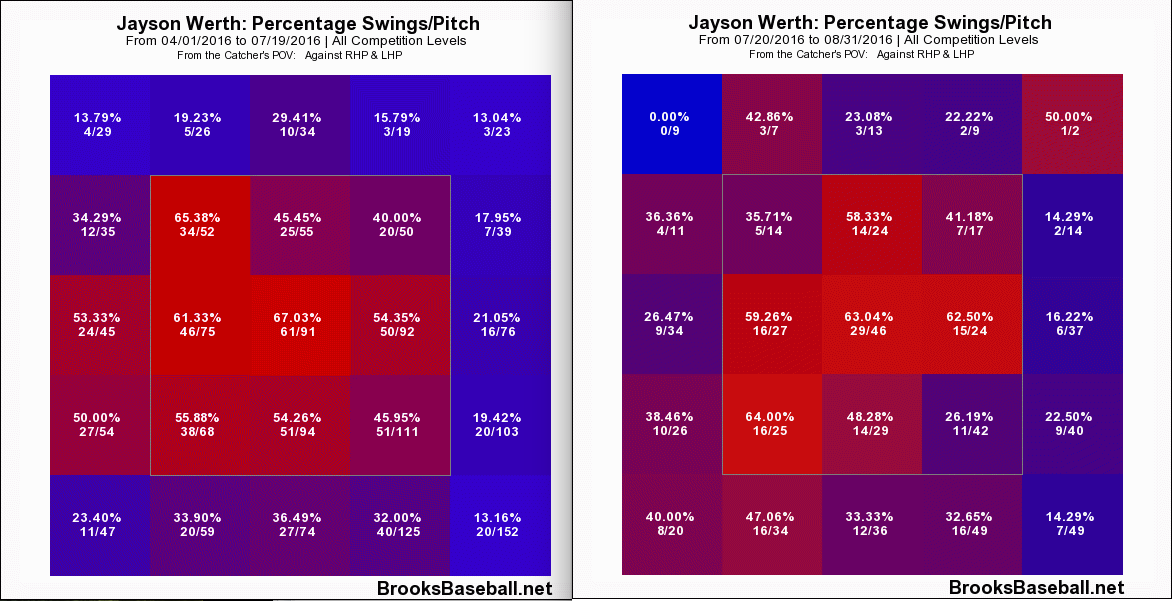 Those samples aren’t tremendously large, and the impact of batting-order machinations can sometimes be overblown, but there may be something to the notion that Werth is more comfortable nearer to the top of the lineup than the bottom. If that’s the case, it might make for a handy positive feedback loop: If a comfortable Werth gets on base at a .392 clip while driving the ball more frequently, he’ll be a fine asset in the second spot in the order, ahead of Bryce Harper, who’s enjoyed his own upturn of late.

The Nationals are nine games clear of the Marlins and Mets in the division, and three up on the Dodgers—who are 31-32 on the road—for home-field advantage should those clubs meet in the Division Series. A hot-hitting Werth could be a difference-maker down the stretch and into October.

In the bottom of the fifth inning of yesterday’s series opener against the Orioles, Marco Estrada briefly had his control go haywire. He plunked Matt Wieters to begin the frame, and then fell behind 3-0 with Pedro Alvarez at the plate. At the time, the O’s were trailing 2-1.

Green light? Sure, why the heck not:

Few major-league pitchers are as adept at coaxing popups as Estrada is, and here, the right-hander’s up-and-away cutter foiled Buck Showalter’s plan. Alvarez skied it over foul ground near third base, and while the shift made it a long run for Josh Donaldson, he put it away for the out no. 1.

Baltimore wouldn’t score in that inning, or in any subsequent inning, which was problematic because, as you might recall, the Birds were down by a run. The Jays scored thrice more, and Estrada finished with seven innings of one-run ball, outdueling Wade Miley, who struck out nine but allowed the visitors to plate three. Showalter’s squad is now four back in the AL East.

Carlos Beltran picked up a couple of singles on Saturday, which was good, because leading up to that, the Rangers’ designated hitter hadn’t logged a knock in 10 days. When a 39-year-old plunges into an 0-for-32 slump in the dog days of August, it’s fair to wonder if fatigue is the cause, if the wear of a 162-game grind is catching up to him, if there’s any thunder left in his bat for the stretch run and the playoffs.

On Monday, Beltran announced to the Mariners that he’s still got it:

Hisashi Iwakuma’s 2-2 splitter didn’t split, and Beltran deposited it into the upper deck in right field for his 25th home run of the year. He’d later add his 26th double, also off of Iwakuma, and finish the night 3-for-4.

Thanks in large part to the switch-hitting slugger, the 14th-ever MLB duel between Japanese-born starters was short-lived. While Yu Darvish worked 6 2/3, Iwakuma was through after three, having been shelled for five runs on six hits and a walk.

After punching out 184 batters in 179 2/3 innings last year, Carlos Martinez hasn’t brought his strikeout prowess to the mound quite as consistently in 2016. The Brewers, however, have a way of bringing out the best in the Dominican righty.

Martinez fanned eight in as many innings on May 30th, then racked up 11 Ks in just five frames on July 9th. Those were his best and second-best strikeout efforts of the season before yesterday. And now, they’ll have to move aside, because yesterday, Martinez punched out a career-high 13.

Everything in the 24-year-old’s arsenal was on in this one. He got five swings and misses with his four-seamer, six with his two-seamer, four with his changeup, and eight with his curve. And the vast majority of those 23 whiffs were not on chase offerings, but on pitches inside the strike zone:

All those empty hacks left the Brew Crew with just one run at the seventh-inning stretch, but Martinez was finished, and the home bats directed their frustration at relievers Matt Bowman and Kevin SIegrist. Those two blew a 3-1 lead and then some, coughing up four runs in the last of the seventh to put Milwaukee ahead 5-3.

Now, the Cardinals went 0-for-11 with runners in scoring position last night, so they’d need homers and errors to eclipse the Brewers’ attack. And homers

they got. Randal Grichuk blasted one to Toyota Territory, and Yadier Molina’s sacrifice bunt turned into a goat rodeo. Tyler Thornburg threw to third too late, and the throw back to first skipped away, allowing Stephen Piscotty to score to the eventual winning run.

The Cardinals eked this one out, 6-5.

Since the Redbirds won, the Marlins-Mets tilt in Queens took on heightened importance. The winner would keep pace in the chase for the second wild card; the loser would cede ground.

Yoenis Cespedes wasn’t in any mood to cede ground:

With nobody on and two away in the home half of the 10th, Nick Wittgren drove a 1-1 fastball right down Broadway and Cespedes launched it a very long way.

And so, the Mets, behind fill-in starter Rafael Montero, outlasted the Marlins in a game started by their ace, Jose Fernandez, 2-1. Both NL East teams are 2 ½ back of St. Louis.

The Pirates and Cubs played the day’s longest contest, by innings (13), by time (5:03), and by pitches thrown (464). Pitch no. 464 was delivered by Jeff Locke to Miguel Montero, and it wound up a walkoff single that ended this one Chicago 8, Pittsburgh 7.

Four of the preceding 463 offerings found their way into the seats in fair ground, with some of each side’s most exciting young hitters accounting a pair of taters for the visitors and the hosts. Josh Bell

weren’t especially impressed with a still-wobbly Jake Arrieta, and both clobbered high-and-away pitches to the opposite field. Arrieta was charged with six runs in 6 1/3 innings, and he walked as many Bucs (3) as he struck out.

The Cubs, meanwhile, did their yardwork later in the contest. Willson Contreras just about split the diamond

before Jorge Soler hammered a 1-2 mistake to the right of center to knot the score in the ninth:

Aside from the dingers, this one also featured The Defensive Play of the Day, courtesy of Josh Harrison:

But neither Harrison’s glove work nor the power displayed by Bell and Polanco was enough, thanks to the guests’ leaky ‘pen.

Now, the Orioles as a whole have hit a rough patch in recent weeks, dropping three of four coming into Monday’s game, eight of 13 dating back to August 16th, and 19 of 32 since July 26th. Their team ERA is 5.43 over the last month and three days. In the last two weeks before yesterday, it was an utterly dreadful 7.30.

And now, they’ve got Jimenez lined up to face J.A. Happ and the first-place Jays.

There’s plenty of time for the O’s to right their ship and catch Toronto, but they’ll need rapid improvement from their pitching staff—now without Chris Tillman, who’s on the DL with shoulder discomfort—to do it. If Jimenez, who held the Nationals to a Jayson Werth solo shot over six innings five days ago, could exorcise his demons with the Jays in town, that’d be a fine place to start (7:05 p.m. ET).

Finally, when it comes to pitchers’ duels, tonight’s slate might’ve saved the best for last. The scheduled starters for the opener of a quick two-game series between the Diamondbacks and Giants are Zack Greinke and Johnny Cueto.

Cueto enters coming off back-to-back strong efforts against the Mets and Dodgers, with one run allowed each time over a total of 13 innings. The right-hander appears to have recovered from a late-July/early-August rut that lasted three starts and saw opponents smack him around to the tune of a .288/.333/.507 slash line. He’s faced the D’backs three times this year and gone seven in each of them, giving up three runs, two runs, and four runs in those starts, albeit without contending with A.J. Pollock, who recently returned from the disabled list after missing much of the season with a fractured elbow.

After a brutal bludgeoning at the hands of the Red Sox on August 14th, when he left with nine runs on his line after just 1 2/3 innings, Greinke’s seen a dramatic softening of his schedule, with a trip to Petco Park and a visit from the Braves. He handled the former quite well, keeping the Friars to two runs in seven innings, but wasn’t as sharp his last time out, when the Braves tagged him for four runs in six frames. Our advanced metrics still like the 32-year-old a good deal, with a 3.31 DRA suggesting that his 4.29 ERA to date is inflated by poor luck, and an 89 cFIP portending better things to come (10:15 p.m. ET).