In this article, I talked about Vince Coleman who stole 326 bases in his first three years in the majors, eclipsing 100 every season, and opined that Billy Hamilton is a similarly devastating basestealer in a more boring era. I calculated that if Hamilton had been used in 2014-2016 the way Coleman was in 1985-1987, he’d have 244 stolen bases since the start of 2014 rather than his present 166. That breaks down to 87 in 2014, 89 in 2015, and 68 so far in 2016. We’d be talking about one of the greatest basestealers in baseball history rather than a guy who’s just really fast. Why aren’t we? Why aren’t the Reds deploying Hamilton the way the Cardinals deployed Coleman three decades ago?

It’s not just that Hamilton gets (justifiably) marked down for his low OBP (.296 so far in his career, .294 since 2014) in a way Coleman never did. Here’s a chart of stolen base attempts per team per year from 1951 to 2016. I’ve normalized all the figures to assume a 162-game season, to put the pre-expansion 154-game seasons, the strike years, and the ongoing 2016 season on equal footing. 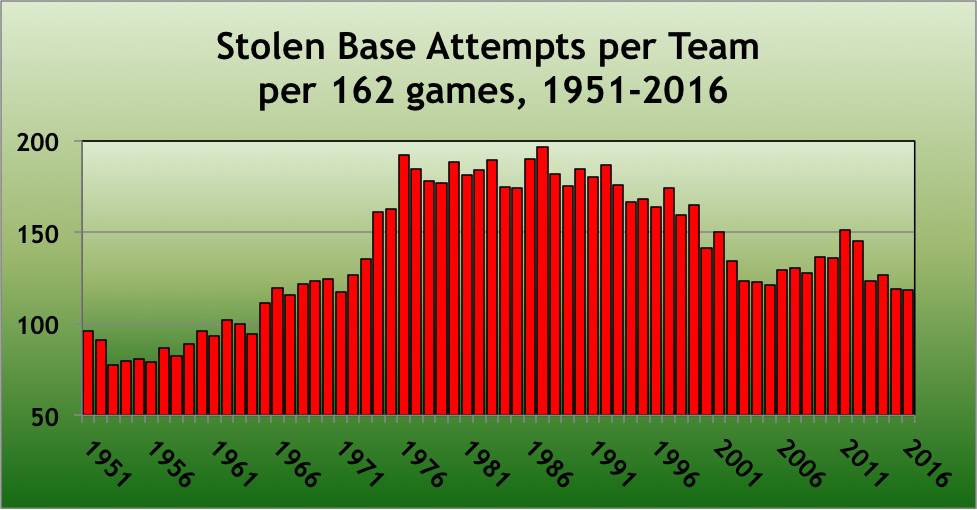 As you can see, stolen bases were out of favor in the 1950s, had a bit of a Maury Wills-led renaissance in the 1960s, then suddenly became all the rage in the 1970s. Every year from 1975 to 1997, the average team attempted more than a stolen base per game. There were a number of reasons—artificial turf, personnel (this was the era when Henderson and Raines strode the earth), and managerial mimicry among them—but the trend pretty quickly died out after a two-decade peak. At the current pace, stolen base attempts per team in 2016 will fall below 119 for the first time since 1971. Why?

Well, maybe it’s because basestealing’s becoming harder. Here’s the same chart of stolen base attempts per team, overlaid with stolen base success rates: 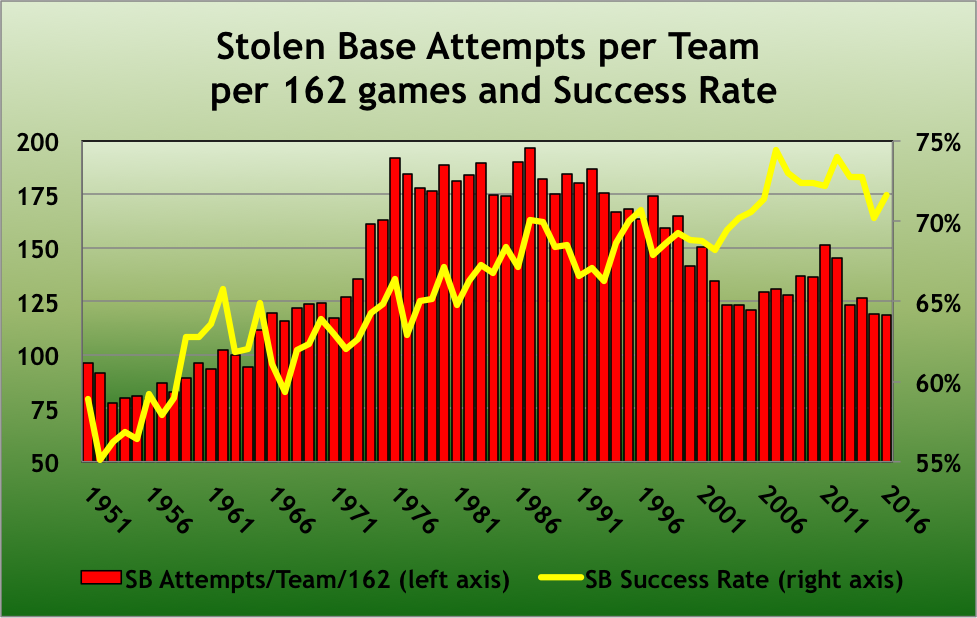 Nope, that’s not it. Basestealers are way more successful now than they were during the stolen base heyday from the mid-70s to the mid-90s. It’s not because of numbers.

Obviously, with stolen bases, being successful beats getting caught. A high stolen base success rate is better than a low one. But a stolen base isn’t good just because it’s successful. It has to make sense in the context of the game.

The rows are the various combinations of runners on base. In the first column, a 0 indicates an empty base, with 1, 2, and 3 representing first, second, and third bases occupied, respectively. So 000 means nobody on, 103 is runners on first and third, 020 is a runner on second. You combine that with the three columns, representing 0, 1, and 2 outs, to figure out the run expectancy. For example, with the bases empty and nobody out—row 000, column 0 Outs—teams scored, on average, 0.479 runs. With one out and a runner on second, teams scored an average of 0.6487 runs. First and second, two outs equated to 0.4361 runs.

We can use the run expectancy table to calculate strategy for basestealing. For example, let’s say Hamilton’s on first with one out. Should he try to steal?

In other words, with Hamilton (or anyone else) on first with one out, it makes sense to steal only if the probability of success is greater than 73.1 percent. If it’s not, you can expect to score more runs by staying on the base. You break even at 73.1 percent.

As you can see from that example, the breakeven point for a steal varies by the base the runner or runners occupy and the number of outs. If you’re inclined, you can check the #goryalgebra (this really doesn’t rise to the level of #gorymath) in the footnote below.[1]. Using the run expectancy table from 2015 above, the highest and lowest breakevens occur when there’s a runner on third. With no outs, the breakeven is very high, 86 percent, because odds are that a team with a runner on third and nobody out is going to score 1.3 runs. A caught stealing drops that by over a run. With two outs and a runner on third, the breakeven’s very low, 33 percent, because teams in that situation scored only 0.36 runs. Among less esoteric situations, the best time for a lone runner on first to steal second is with two outs (69 percent breakeven) and the best time for a lone runner on second to steal third is with one out (67 percent breakeven).

I calculated the breakevens for every base-out situation and then weighted them by the actual stolen base attempts in 2015. Overall, the theoretical breakeven point was 70.24 percent. The actual stolen base success rate was 70.19 percent. That’s virtually identical. Teams were stealing bases in way that makes sense, though just barely. Ideally, you’d want a success rate a few percentage points above breakeven. But at least we can say that teams weren’t hurting themselves with stolen bases in 2015.

But has this always been the case? I ran the same calculation for every year from 1951 to 2016. I used the same yellow line, indicating stolen base success rate, from the graph above, and added a red line for breakeven rate. 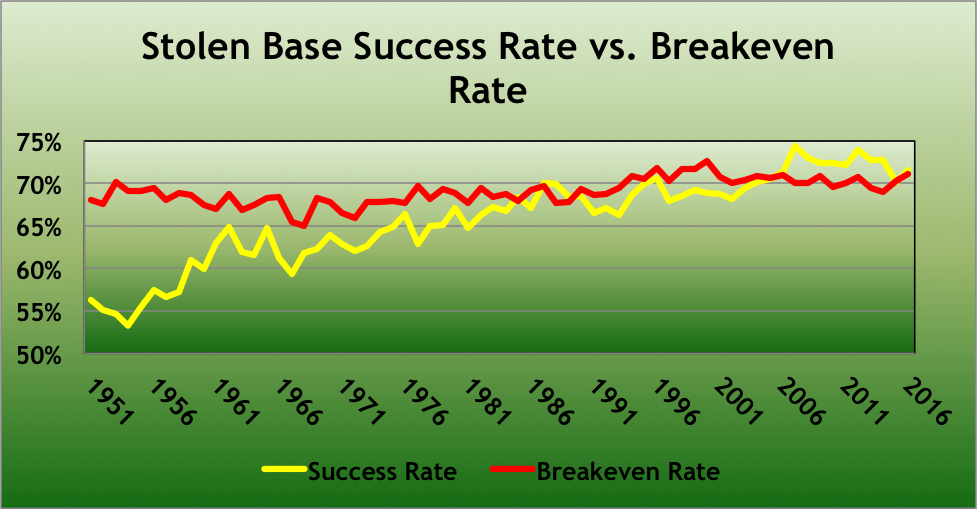 Simply put, baseball’s gotten a lot smarter about basestealing. Until the 1980s, managers were routinely sending runners in situations that hurt the offense. In 1954, for example, there were 344 stolen base attempts with a runner on first and one out. Given the run scoring environment, a stolen base attempt made sense given a success rate of 72 percent. Baserunners trying to steal second with one out were successful in only 43 percent of steal attempts that year. This was seat-of-your-pants, gut-feel baserunning, and said seats and guts were frequently wrong.

But stealing bases has become a winning strategy again of late. Since 2005, the stolen base success rate has been equal to or better than the breakeven rate every year. (Yes, I’m counting the aforementioned 0.05 percent excess of breakeven over actual in 2015 as equal.) So does that mean teams should be stealing more, giving Hamilton his shot at 100 stolen bases per year?

Sadly, no. In the cat-and-mouse of baseball strategy, teams improve their basestealing, then catchers and pitchers work together to clamp it down. The fact that teams are exceeding the basestealing breakeven doesn’t mean they should be stealing more. Rather, I’d argue that by stealing less and more selectively, they’re become more successful. Sabermetric measures like run expectancy have shown how inefficient and run-suppressing base stealing was decades ago, effecting a change in the game. (In researching this topic, one source encouraged me to look at win expectancy rather than run expectancy. Win expectancy entails base-out state as well as inning, home/away, and run differential, but that was beyond the scope of my analysis, not to mention my pay grade. However, it’s the type of advanced analytics that are driving decisions like base stealing) Using analytics, managers are limiting stolen base attempts—look at those shortening red bars in the first two charts—to situations in which the cost-benefit makes sense. That works against players like Billy Hamilton. Hamilton’s 88 percent success rate this season clears the bar for every stolen base breakeven this year. But if he attempted more steals, presumably, his success rate would decline, making his steal attempts less valuable and, in some cases, a detriment. Yes, he could try to steal more. Some of his attempts would help the Reds. But some wouldn’t. The numbers that we have at our disposal now, and didn’t in Vince Coleman’s days, are driving the decision.

The days when a low-OBP batter like Vince Coleman (whose .249 lifetime TAv ranks 538 of the 602 batters with 5,000 or more plate appearances since 1950) was a fixture at the top of the lineup (he batted leadoff in 98.8 percent of his 1,291 career starts), where he attempted a stolen base 60 percent of the time he was on first or second with an open base ahead of him, are gone. They’ve been replaced by a more rational approach, when leadoff hitters are good at getting on base and base stealers are selective. But that rationality, in a way, is less fun. Billy Hamilton is an amazing talent. It’d be a blast to see him lead off every day and rack up 100 steals a year. That’d be something we could tell our grandchildren about. But he won’t, and we won’t. And as sabermetricians, we have only ourselves to blame.

Thanks to Rob McQuown for Vince-Coleman-stolen-bases-sized research assistance.

I also had to make some assumptions about stolen bases when more than base is occupied, since my data source, Baseball-Reference.com, lists stolen bases and caught stealing by base-out state but not the runners who steal or are caught. With runners on first and third, I assume only the runner on first attempts to steal. Yeah, I know, delayed double steals, but the success rate on these steals is so high (89% so far this year) that it appears that defenses are conceding the steal of second in many cases. With runners on second and third and with the bases loaded, I assume all runners go, and the lead runner trying to steal home is the one that’s out if there’s a caught stealing. For runners on first and second, I assume all runners go, and Rob McQuown calculated (using data since 2000) that if there’s a caught stealing, it’s 83.4% at third and 16.6% at second. Other than steal attempts with runners on first and third, steals and caught stealing with multiple runners on base account for only 8% of the total, so if my assumptions are off, they’re not moving the needle much, if at all.

[2] (Base stealing is more appealing in low run environments, since runners are better off holding their base and waiting for a masher behind them to drive them in when there are a lot of runs being scored. The breakeven for a steal of second with two outs was 59.6% in 1968, the Year of the Pitcher. In 2000, at the height of the Steroid Era, it was 72.1%.