I’m a Retrosheet volunteer. If you don’t know it, Retrosheet—the website is retrosheet.org—is a fantastic site. It’s an online source of box scores and play-by-play data, and its archive is growing. And it’s 100 percent free to baseball researchers. It’s so prominent in research circles that when you use the Play Index at Baseball-Reference, one of the default timeframe choices is “Retrosheet (1913-2016).” It’s a source for some of the statistics here at BP and has launched a constellation of R scripts. (If you want to get involved with Retrosheet, hit the email icon at the top of this and I’ll send you information.)

As a volunteer, I use the microfilm scanners at the New York Public Library to capture game summaries from various New York newspapers from long-ago games. I email them to Retrosheet, and Retrosheet “deducers” use these and other game accounts to attempt to build play-by-play files.

I see a lot of people at the microfilm scanners. Most of them are students, or people sent by their boss to get information about a specific event, or other folks whose interaction is a one-off. Using the scanners isn’t intuitive, and people who haven’t used them before, or haven’t used them since college, have trouble loading the microfilm reel or focusing the images or saving them to a flash drive.

But every once in a while, an experienced microfilm user sits down in front of a machine, someone who really knows what to do. We recognize one another quickly, and can converse a bit given that we’re not consumed with getting the scanner to do what we want. In April, I met a professor of American and Canadian Studies from a UK university. We discussed our projects. I told him about Retrosheet, and he explained he was doing research on socialism and communism is the U.S. He was looking for articles in the American socialist and communist press as part of his project. As he was wrapping up, he asked me for my email, explaining, “I have something for you.”

He sent me a scan from the Daily Worker. The Daily Worker was the official paper of the Communist Party USA, published daily in New York from 1924 through the mid-1950s. Its end was precipitated not by McCarthyism but by a schism within the Communist Party over the 1956 Hungarian Revolution. The paper was reliably Stalinist, supporting not only the Soviet regime but also various left-wing causes in the US. Somewhat incongruously, the Daily Worker had a sports section, with a focus on baseball, and was an early advocate of desegregation (as well as ridding sports of capitalists the bourgeoisie).

In the summer of 1948, there was much going on in the Communist world. Seeds of communism were being planted in Eastern Europe and Latin America, including nearby Cuba. In America, labor-management relationships were tense, with large strikes commonplace. And, from the ashes of World War II, the Red Scare was emerging as a potent political and cultural force; the McCarthy hearings would commence in less than six years.

Given that backdrop, here is the cover page of the Daily Worker from August 17, 1948: 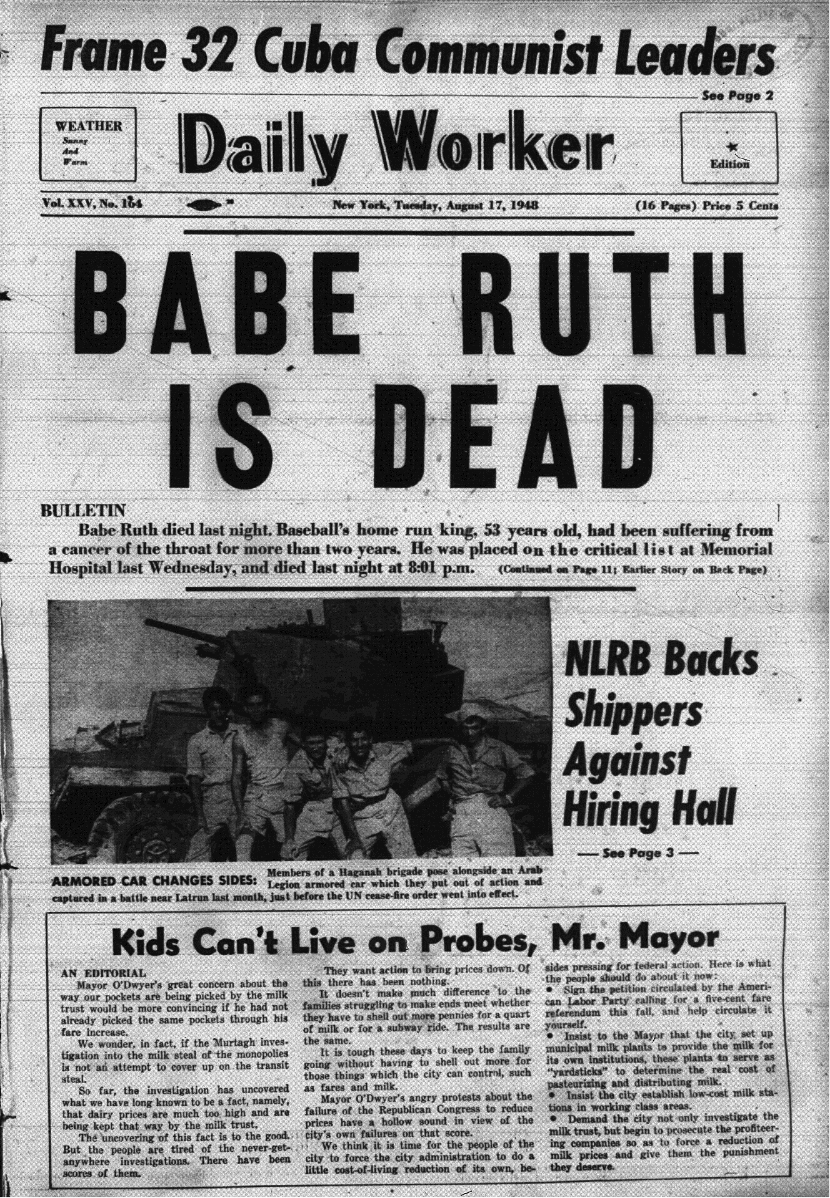