Nevertheless, Joe Girardi entrusted Green with the starting assignment yesterday, in game one of a three-game set with the Blue Jays in the Bronx. While the Jays’ order features a particularly imposing top and heart, the complexion of Toronto’s roster worked in Green’s favor. Devon Travis, Josh Donaldson, and Edwin Encarnacion—the first three batters in the road lineup—all hit from the right side, as did fifth-place batter Troy Tulowitzki. The lone lefty in the top five was Michael Saunders, who enjoyed a torrid first half but brought a 10-for-62 cold spell into the series.

Fortuitous matchup or not, however, it was still up to Green to seize the day. And seize it, the 25-year-old did.

The Yankees scored just one run Monday, on a fourth-inning double by Aaron Judge,

who went 2-for-3 with a walk, showing a mature approach by driving R.A. Dickey’s elevated knuckler into the right-center field gap and building on the excellent start to his major-league career. With runners at second and third, and one away, Aaron Hicks struck out swinging and Jacoby Ellsbury followed by taking a third strike, squandering an opportunity to add on. There’s your one run, Chad, now let’s see what you can do.

and show tremendous faith in his slider, with the command to match:

Note the count in the top-left corner on this back-footer to Saunders, good for the first out in the top of the fifth. The Jays would threaten in that frame, putting runners on second and third with one down. Time for another payoff slider,

that one fooling Justin Smoak. The next batter was Melvin Upton Jr., and he, too, worked a full count. Green’s answer?

The rookie went on to strike out the side in the sixth, his last frame on the hill, ending the night with five straight Ks and a total of 11. Tyler Clippard, Adam Warren, and Dellin Betances kept the 1-0 margin safe the rest of the way.

But the story here was Green, who found himself in exclusive company when he departed

Chad Green is the 2nd rookie in Yankees history to record at least 11K with no runs and no walks in a game (Stan Bahnsen, 8/1/68 at BOS).

and gave those pushing to relegate him to the bullpen some food for thought.

Monday’s matchup played to Green’s strengths, there’s no questioning that. But mid-90s gas and well-executed breaking balls in fastball counts can go a long way toward compensating for the lack of a changeup to rattle glove-side foes. It was enough yesterday, and as the Yankees sift through the pieces that will form their squad in 2017 and beyond, that should earn Green a few more turns to prove he can start.

Between the fifth inning Friday and the fourth inning Monday, the Rangers didn’t score. In the first three innings of their series opener with the A’s, they had no trouble putting runners aboard against Ross Detwiler, but kept grounding into double plays that prevented anyone from coming home. Then they got two men on with nobody out in the fourth inning, and Rougned Odor scalded a ball that looked to be bound for the gap and…

…Tyler Ladendorf got in the way.

Beltre’s grand slam made it 5-2 Texas, the eventual final score.

Martin Perez went seven and kept the A’s to two runs, one earned, while striking out six. The lefty got 11 outs on the ground, including a pair of double plays, giving him 33 twin killings on the year, a single-season franchise record.

Matt Bush and Sam Dyson took care of the rest, and the Rangers became the first junior-circuit team to reach 70 wins in 2016.

Bartolo Colon had a couple of bucket-list items he could cross off yesterday. He could become the 18th pitcher in major-league history to beat all 30 teams, and he could draw his first career walk at the plate.

Colon got one of those out of the way:

But if he could only go 1-for-2, in the grand scheme of things, the Mets would’ve preferred the other. That walk—Colon’s first in 281 career plate appearances, an all-time record—was about the only thing the portly righty did right on Monday night.

On the mound, Colon was milked for nine hits and two walks, exacerbated by shaky Mets defense that led to five total Arizona runs, two of them earned. Colon lasted just four innings and he struck out only one batter. Three Mets relievers combined to give up five more runs, and the visitors dropped game one at Chase Field, 10-6.

Next to sun, wind, and food-throwing fans, on-field bullpens can be an outfielder’s worst enemy. Hunter Pence took a spill on the visitors’ mound in AT&T Park’s right field and was flat on his back as this pop fly came down. But that didn't stop him from coming up with it:

That play aside, it was Pence’s counterpart, Gregory Polanco, who made his presence felt in this one. After blooping a two-run single earlier in the game, the Pirates right fielder clobbered one off of Levi’s Landing and into McCovey Covey for a two-run shot that put the Bucs up three late.

With a month-and-a-half left in the regular season, the American League Cy Young Award race might be the toughest of the hardware chases to peg. There’s the Indians’ three-headed DRA monster, led by Corey Kluber (2.68) only because he’s pitched about 40 more innings than Danny Salazar (2.70) and 50 more than Carlos Carrasco (2.64). Then, there are the Central division’s other deserving hopefuls, led by Chris Sale (4.78 PWARP), Justin Verlander (4.58), Jose Quintana (3.83), and perhaps baseball’s hottest pitcher, Danny Duffy, who’s 7-0 since June 27th with a line that reads like this: 65 2/3 IP, 50 H, 17 R/ER, 9 BB, 67 K. And, if you venture outside the heartland, there’s a host of other intriguing-if-unconventional options, like knuckleballer Steven Wright, closer extraordinaire Zach Britton, or the 16-3 J.A. Happ.

There’s no reason to stray from the Central tonight, though, with two matchups featuring four of the aforementioned aces. It’s Quintana and Kluber as the White Sox visit Cleveland, and Duffy and Verlander with the Royals in Detroit. And they’ll get underway simultaneously, so if you haven’t tried out MLB.TV’s split-screen feature, tonight’s as good a time as any to fire it up (7:10 p.m. ET).

As the Rangers look to firm up their grasp on the AL West, one of their first-half stars has stumbled badly since the end of July. Ian Desmond had just 11 hits, none of them for extra bases, in his last 62 at-bats entering play on Monday, and he’s struck out 19 times compared to just two walks during that span. That amounts to a .177/.200/.177 slash line, made a touch worse by the fact that the shortstop-turned-outfielder was thrown out in his lone steal attempt since July 30th, as well. It’s a dismal slump, any way you slice it, and besides the increase in whiffs, the culprit here is a ground-ball binge 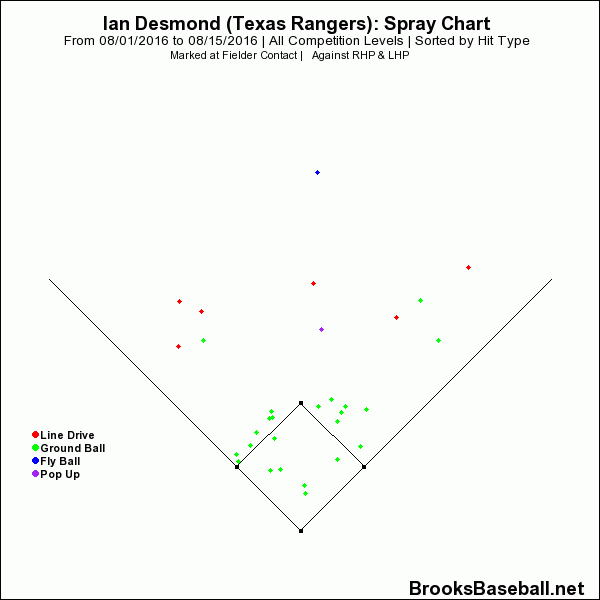 made worse by a troubling plunge in exit velocity on fastballs: 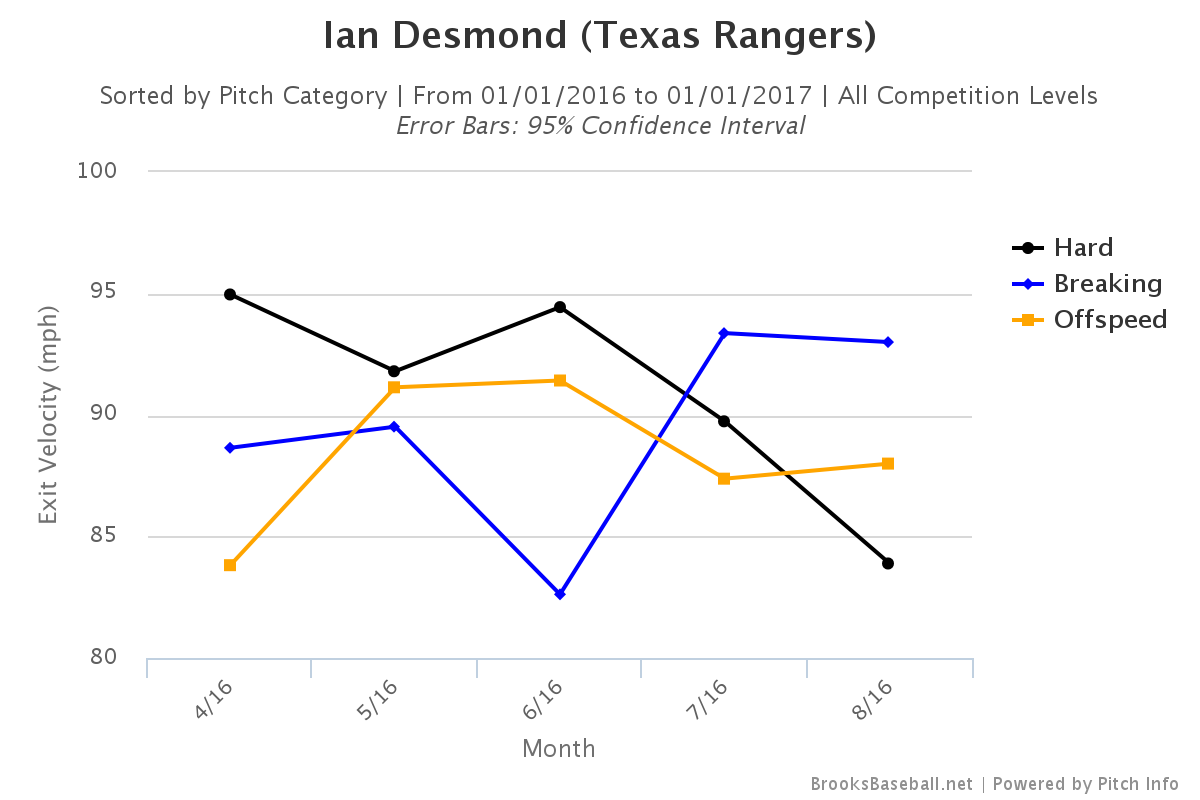 After pummeling four-seamers (.345 AVG/.603 SLG), sinkers (.364/.485), and cutters (.370/.593) through July 29th, Desmond’s been baffled by the lot over the past two weeks and change, going a combined 5-for-29 with nine strikeouts in at-bats ending with one of those three offerings. He’ll try to get back on track tonight while facing A’s right-hander Andrew Triggs, a sinkerballer who’ll test both Desmond’s recent struggles with the hard stuff and his newfound proclivity for drilling the ball into the dirt (8:05 p.m. ET).