The Monday Takeaway
The Indians had themselves a mighty fine trade deadline, even after Jonathan Lucroy nixed his ticket to Cleveland. Andrew Miller should fortify the bullpen and Brandon Guyer figures to provide a nice boost to the outfield. With a relatively stable and healthy rotation, general manager Mike Chernoff was able to use his myriad trade chits to patch other roster holes while steering clear of the extreme sellers’ market for starting pitchers.

Then the deadline passed, and game time came around for the Tribe’s August opener against the Twins, and… uh oh.

Danny Salazar’s velocity has fluctuated at times this season, with a pronounced dip in mid May and another in late June, the latter of which was ongoing when the right-hander took the hill Monday. 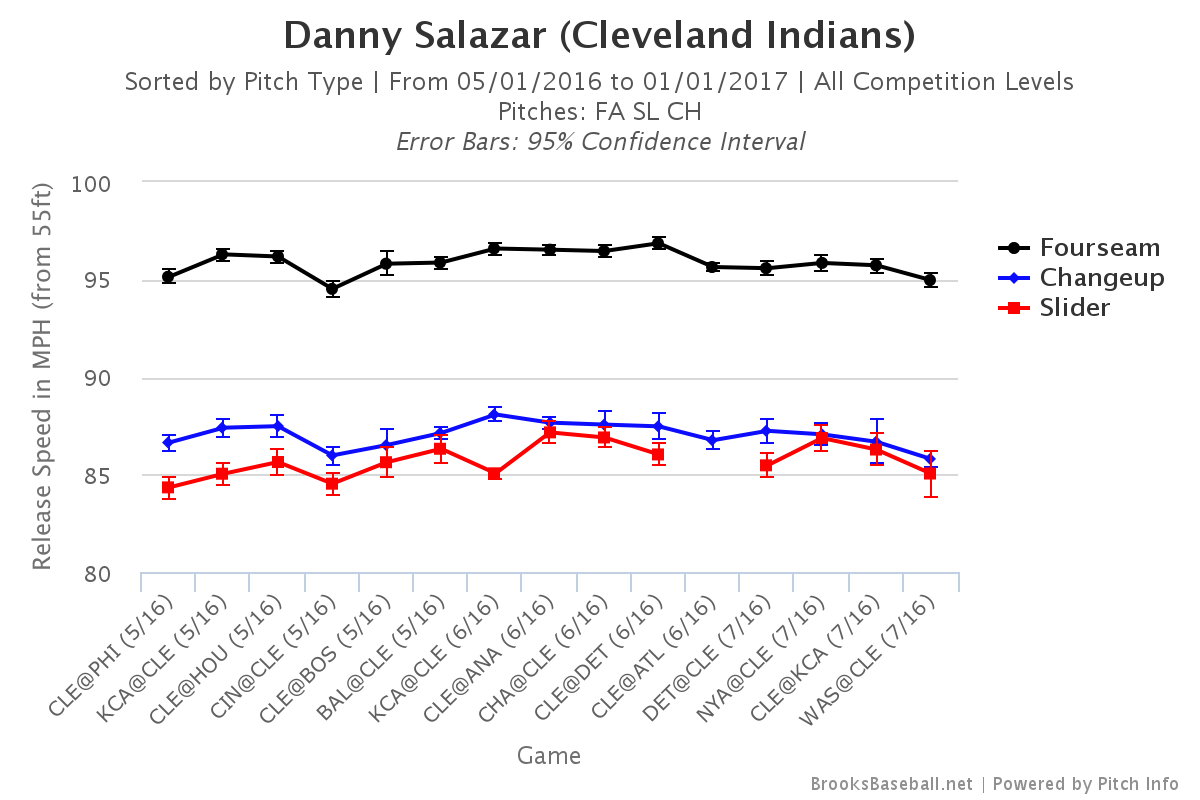 There are several ways to describe Salazar’s start to the workweek, and none of them are kind. Take this pitch chart, for instance,

which shows a slew of glove-side fastball misses. By the numbers, Salazar threw just 16 of 36 four-seamers for strikes, and only one of those was a whiff. The velocity on those fastballs registered a mean of 94.4, continuing the downward trend in the chart above, even though Salazar did, on one occasion, touch 97.

Alternatively, there’s this fact: In his first 19 starts of the season, totaling 115 1/3 innings, Salazar served up just 10 homers. On Monday, he was torched thrice. Twins right fielder Max Kepler—the major-league leader in home runs since June 26th with 12—had himself a grand ol’ time at Salazar’s expense. He ripped a two-run shot in the first

and added another in the third,

part of a three-homer, four-hit, six-RBI day, all career highs for the 23-year-old German. Kepler’s the fifth player in Twins history to deliver a three-tater game.

Those homers were just the tip of the iceberg for Salazar, who lasted just two innings and three batters, and gave up six hits and two walks, including another long ball by Eddie Rosario. And, as if that weren’t enough, Joe Mauer launched a ninth-inning solo shot off of Miller, spoiling the southpaw’s Progressive Field debut.

But the consternation in northeast Ohio on Monday centered on Salazar. With Salazar and Corey Kluber in peak form, the Indians were the only American League team with two starters in the top 10 in PWARP. Now, after an exciting end to July that positioned the Tribe to contend for the pennant, the whole of Cleveland will hold its breath while awaiting the results of this morning’s MRI.

Quick Hits from Monday
Down in Tampa, the Rays had themselves a very Duffy deadline. First, they acquired Matt Duffy from the Giants in a blockbuster that sent Matt Moore to San Francisco. Then, while awaiting their new Duffy’s return from the disabled list, the Rays ran headlong into the Royals’ Danny Duffy, who had no mercy on a lineup now sans lefty-masher Steve Pearce.

Duffy the pitcher, intermittently brilliant this year but just as often vulnerable, was as good as ever Monday night at the Trop. He was both unhittable and ruthlessly efficient, and everything was working for the southpaw from the word go.

After Logan Forsythe popped out to begin the home half of the first, the next five Rays batters all struck out swinging. After Tim Beckham flied out to start the bottom of the third, the next two did, as well. And Duffy wasn’t even one-third of the way to his punchout total for the night, which reached 14 before Desmond Jennings doubled to kick off the eighth and topped out at 16 when Duffy escaped that frame, his last of the day, unscathed.

With Pearce en route to Baltimore, Evan Longoria was left as the Rays’ best bat. And Duffy made Longoria look silly not once,

And that curveball, chiefly responsible for Longoria’s hat trick, was merely Duffy’s third-most-effective pitch last night. The 27-year-old induced 17 whiffs with his fastball and 14 more with his changeup,

on his way to a whopping total of 35 swinging strikes and the Royals’ single-game K record.

Chris Archer’s 7 1/3-inning, three-run effort was nice. But while the Rays’ ace held Kansas City scoreless into the seventh, Kendrys Morales got Duffy the support he needed with one away in that frame:

The Royals scored twice more in the eighth to take this one, 3-0.

Up in Chicago, changeup artist Kyle Hendricks had his off-speed offering dancing all evening long. And try as the Marlins’ might, the pitch they could do the least damage on was the one they kept hitting into play.

Relatively speaking, there aren’t that many blue dots on the pitch plot above. Just 33 of them, in fact, in 123 total pitches. Twenty-four of those changeups went for strikes, 23 of them swinging. Fourteen of those 23 swings became balls in play, and 12 of them turned registered “In Play, Out(s)” on the At-Bat app. And that regular dozen actually yielded a baker’s dozen of outs, because the last one, Hendricks’ final pitch of the night, turned into a pair:

That was the finishing touch on the righty’s seven-hit shutout, the second complete game and first blanking of the season for the 26-year-old Dartmouth product. Just for good measure, he also chipped in an RBI single

to advance his own cause in the 5-0 Cubs win.

The Defensive Plays of the Day
Here’s a play Alex Bregman probably didn’t have to make very often during his days as a middle infielder:

Positioned near the grass for Darwin Barney’s third-inning plate appearance, Bregman had to retreat and leap to snag a wicked chopper, then make a strong, flat-footed throw to first to retire the Jays’ infielder.

On the other side, Devon Travis tendered his own submission for recognition in this segment:

With glovemen like that behind them, it’s almost a shame that Marcus Stroman and Doug Fister brought their best strikeout stuff to the yard. Stroman whiffed a career-high 13 while Fister racked up eight. The only two runs scored in regulation play came on balls that no fielder could reach, solo shots by Jose Altuve and Russell Martin.

The only run scored in extras was allowed by Scott Feldman. A day ago, that would’ve meant an Astros loss. But on this day, the Astros traded him to the Blue Jays. Feldman walked across the hall at Minute Maid, put on his new uniform, and promptly lost the game. A leadoff single by Altuve followed by an RBI double by Carlos Correa took care of business in the 14th: Astros 2, Jays 1.

What to Watch on Tuesday
Orioles fans awaiting Dylan Bundy’s emergence as a quality big-league starter might finally be on the cusp of getting their wish. There are reasons for the optimism to be guarded—not least of which are the five homers he’s surrendered in his last 16 1/3 innings—but Bundy has struck out 24 of the last 70 batters he’s faced while walking only six. The right-hander held the Indians without an earned run in five innings on July 22nd and tossed 5 2/3 frames of three-run ball against the Rockies five days later while booking a career-high eight strikeouts. He’ll look to carry that momentum into August, which begins with another tough matchup, this time featuring the Rangers and Yu Darvish, as two of the league’s top six home-run offenses square off at Camden Yards (7:05 p.m. ET).

While we’re on the subject of starters logging intriguing strikeout numbers, there’s also Robbie Ray, who in his last two outings tallied a combined 21 of them in 10 2/3 frames. A 6.75 ERA—with three unearned runs to boot—obscured the 21-to-3 K:BB ratio, but a lot of that was the product of a .429 BABIP that ought to be tamed in short order. The 24-year-old might have a 4.70 ERA, but his DRA is just 3.27 and his 81 cFIP places him alongside Stephen Strasburg (80), Danny Salazar (81), and Max Scherzer (82), which is mighty fine company for a young’un to keep. Up next for Ray is a date with the Nationals, owners of two of the aforementioned starters, who’ll go with Tanner Roark in the second of three at Chase Field. Ray could become the first Snakes starter to reach double-digit Ks in three straight outings since Randy Johnson did it in four straight back in 2004 (9:40 p.m. ET).