On Wednesday, the Angels played the Royals. I should note that I did not watch this game live. The Angels aren’t very good, and the Royals aren’t very good. These are two sub-.500 teams, and one of them was on the way to being even sub-.500ier, so I did other things with my evening. But then I came across this tweet from Grant Brisbee:

This is a 12-minute segment of a baseball broadcast about a controversial play, and they show one replay. https://t.co/TDYdpjk3cI

Wait, what? What happened in this game to necessitate a 12-minute clip of anything? It was the bottom of the seventh inning. The Royals were trailing the Angels by two runs. Alex Gordon and Paulo Orlando led off the inning with back-to-back singles, which brought Raul Mondesi to the plate. It was Mondesi’s birthday. He squared up to bunt, and laid down a good one. So far, these 12 minutes aren’t justifying themselves. That’s the funny thing about knowing the length of a highlight. You don’t know exactly what goes on, only that something must have because it is conveniently labeled “Angels protest Mondesi’s hit” and so something must have happened to merit the protest. But how could there be that much more? Matt Shoemaker goes to field the ball and then, with Mondesi motoring down the baseline, he threw it into right field. Gordon and Orlando scored to tie the game, Kole Calhoun slipped in the outfield, and Mondesi advanced to third on Calhoun’s late throw. 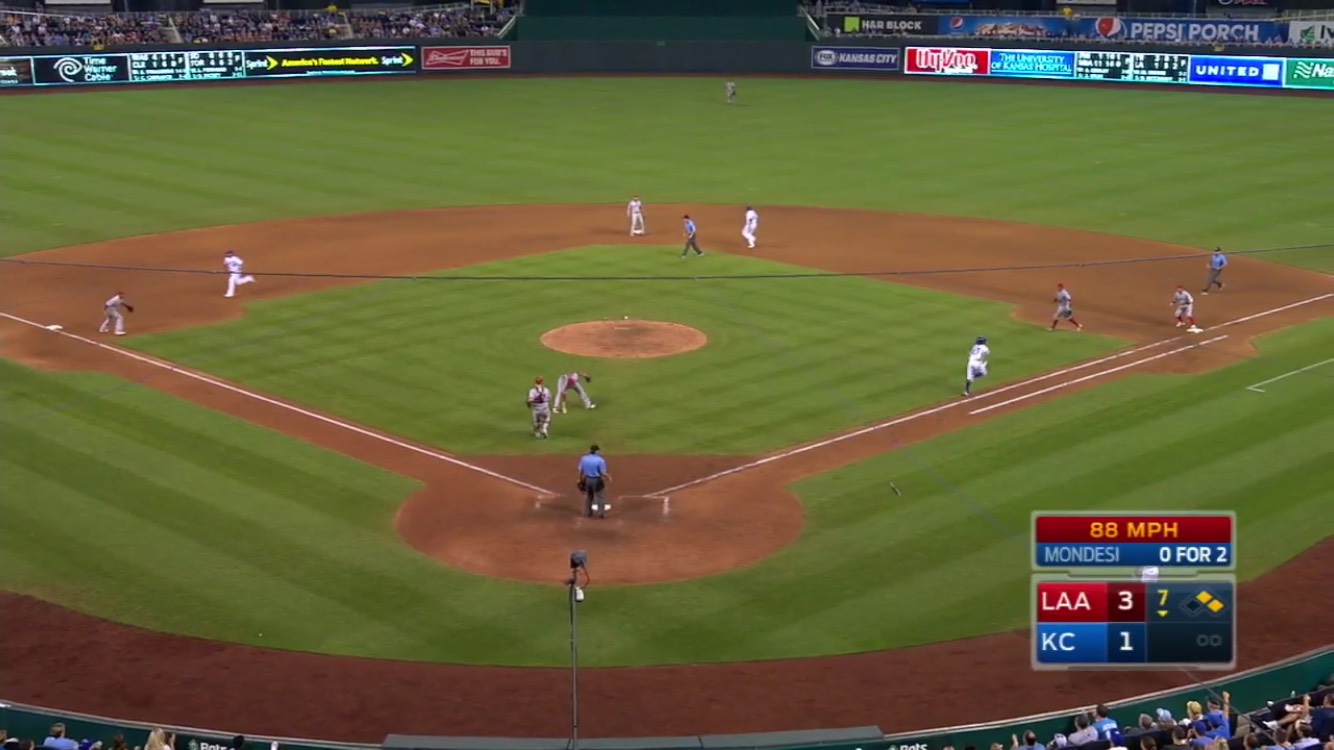 But here’s the thing. Whether or not he was in the running lane doesn’t matter. First, it’s a judgment call, so once the first base ump says he was in the running lane, he was in the running lane. It effectively transports him into the running lane if he wasn’t there before. Not in a magic way, but in a baseball way. The manager can’t challenge because it isn't reviewable. Of course, managers can ask umpires questions, and Mike Scioscia is nothing if not a manager who asks questions. This is the sort of thing that drives replay’s detractors crazy, but that’s what you get folks for having HiDef TVs. But perhaps more importantly, we don’t ever really get to see a replay that would tell us one way or the other. Not that one doesn’t or couldn’t exist. It just doesn’t exist on this broadcast. 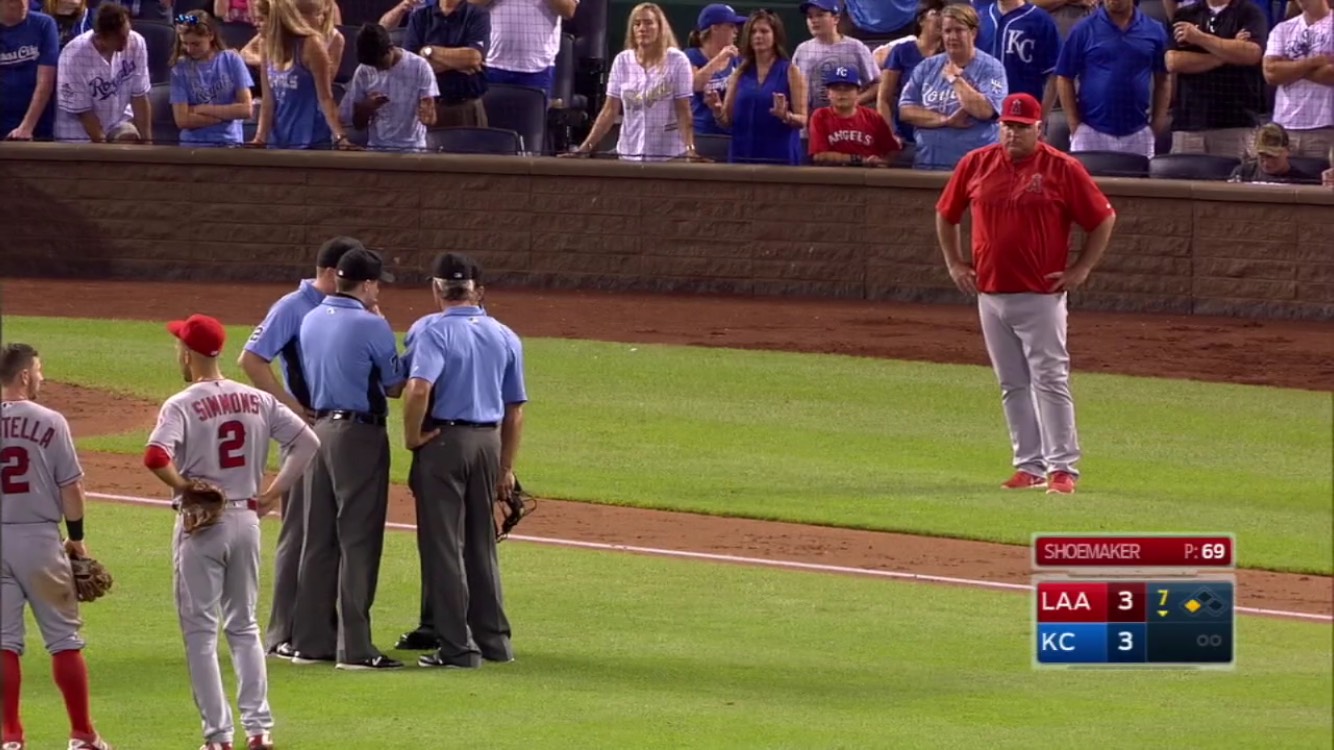 Last week, Patrick Dubuque wrote about how the details of a game are washed out in person. Not that the ballpark isn’t an overwhelming sensory experience. There is music and there are children. People are yelling stuff. You get to hear the crack of the bat in person, although ballpark crowds rarely adjudicate flyballs properly. But you end up missing a lot of the game. You can’t see the tracer. You boo the zone without any real idea of where the corners are. You wait around, chat with friends, and miss things. Depending on your seat you might literally have bits of the field obstructed from view. It’s easy to not know what is happening for a moment. And if your half second of attention spent making sure your beer ends up in the cup holder rather than the seat in front of you and you miss something like this, you get limited opportunities to relive it. They’ll show the replay in the ballpark a couple of times, but you’ll get limited angles and then be left asking your neighbor, “Wait, what happened?” This broadcast of a replay is the most a broadcast has felt like being at a game all year, because they barely show you anything. It’s sort of incredible, really. Fifty-six seconds into the highlight, the broadcast shows a replay of the play: 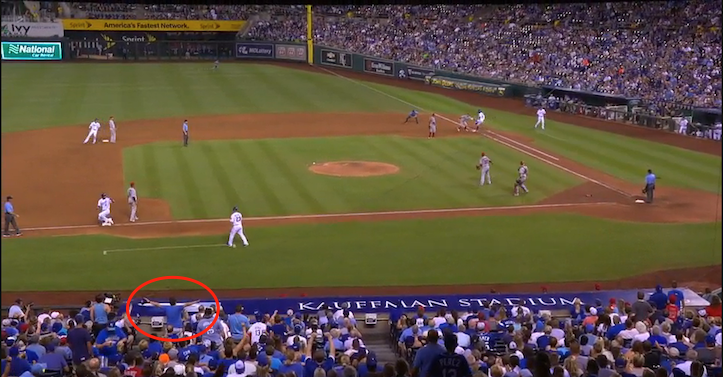 The replay angle is over the third base dugout. Mondesi is running down the first base line, or at least, I think it’s Mondesi because that’s who I’ve seen standing at third base after the fracas. I know that guy down there circled in red thinks Mondesi is safe. But beyond that, and the greenness of the grass, you can’t tell all that much.

At 3:02 “We’re Not Gonna Take It” by Twisted Sister plays, but sure we are. We’re going to take it for another nine minutes. At 3:10, we get a zoomed in slow-mo of Mondesi hitting his stride halfway up the lane, then barreling through the bag with such force that his helmet comes off, but it hardly seems conclusive. Maybe we should see that again. Only we won’t, because this broadcast of a long challenge that isn’t really a challenge won’t show it to us again. Instead we get “Woman peaks curiously around Mike Scioscia to see if she can figure out what the heck is happening”: 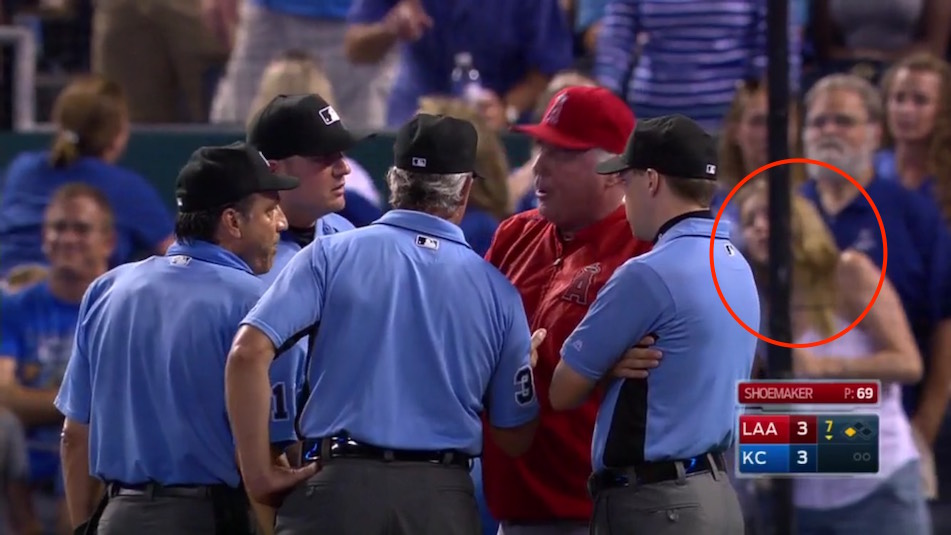 And also “Ned Yost wonders what on Earth is taking so long because isn’t this non-reviewable? What are they reviewing?” 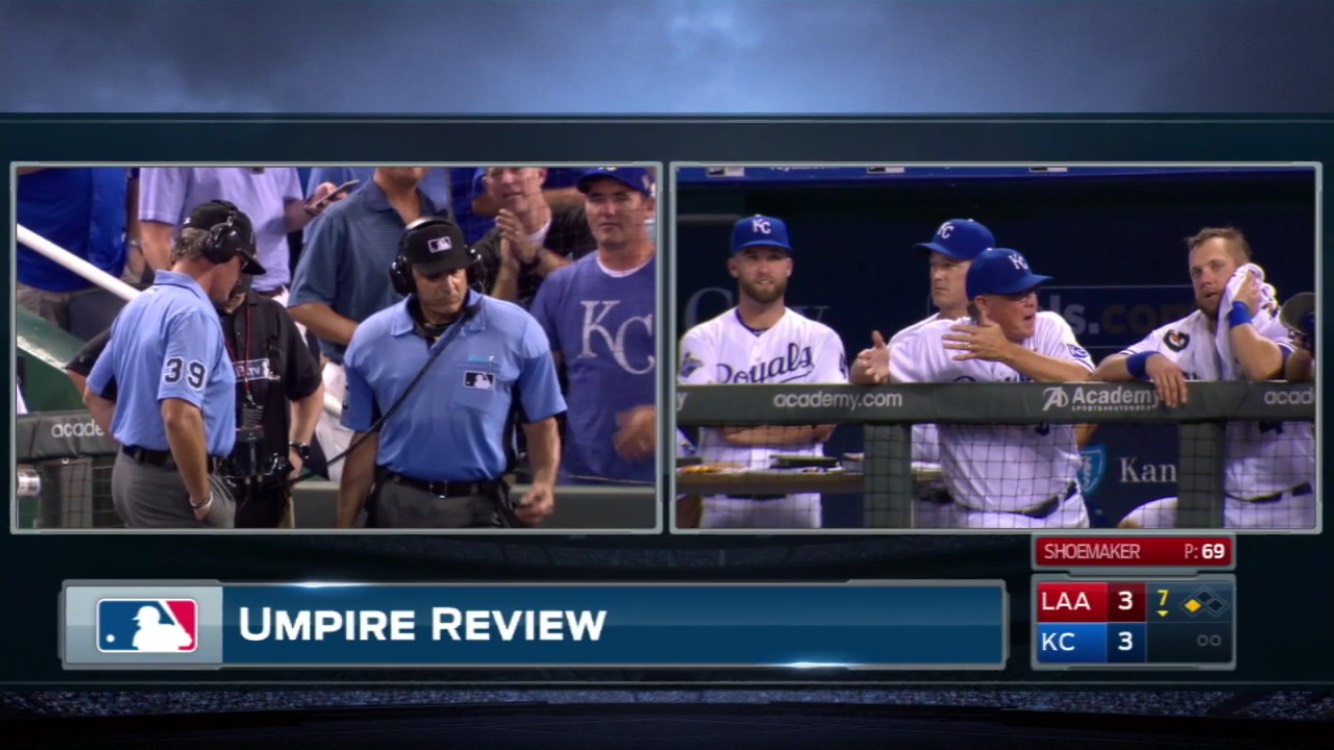 A normal broadcast would blow this up and slow this down and make you wonder what exactly about the Zapruder film was so tricky. We’d definitely see Calhoun fall down in the outfield at least three times. But this broadcast seems to ask: What if we just didn't show you again? What if you just had to rely on what you saw the first or second or third time around? You know those camera angles that reveal a runner’s foot came off the bag, or a fielder missed a tag? Who needs them? Not us! It's 10 minutes of us watching Scioscia watch the umps. We listen to the announcers explain the stakes as “Gettin’ Jiggy Wit It” plays, and they remind us, “I mean this is a big play, when you think about it, could end up being first and second, 3-1 score still, with one out as compared to 3-3 with man on third with no outs, a huge decision here.” We’re seven minutes and 27 seconds into the replay and the only difference between us watching it at home and the restless shifting we’d experience in the stands is that we know we only have five minutes more. We go back to watching Ned Yost watching the umps as they talk to New York.

We listen as the broadcast booth explains the relevant rule: “Now what Mike Scioscia's arguing, you always at first base you’ve got the running lant there’s two lines, going up the first base line, that is the running lane and that is supposed to be where the base runner is supposed to remain through the bag, it’s counter intuitive because the bag is always in fair territory but the running lane is in foul territory. It’s most… it’s the oddest thing in the world…” We kind of want a hot dog. We expect the whole time for some producer to throw up that trusty replay, to anchor our viewing experience with something tactile and relevant and more interesting than seeing a bunch of men in cheap slacks are thick belts listen to a disembodied voice far away, but no. 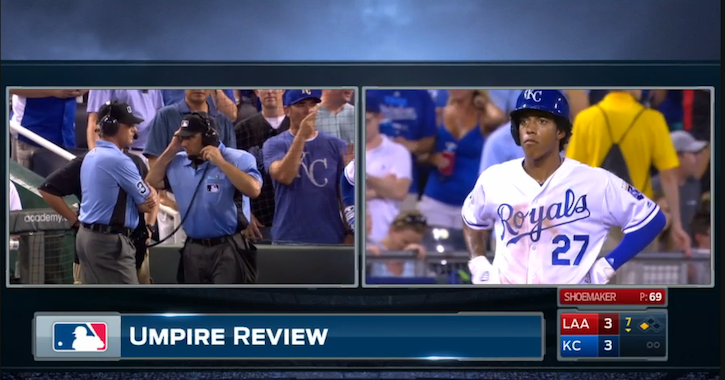 All we get is Mondesi waiting with his helmet on and his hands on his hips, wondering why he has to spend his birthday like this instead of celebrating his first big-league hit. It's like being in a seat that doesn't exist in the ballpark, listening to a HAM radio.

As the minutes drag on, we watch a guy behind home plate attempt to explain what is happening to his buddies, and all that keeps it from being the guy next us at the park leaning over and trying to explain what’s happening is the beautiful synchronization the broadcast provides between Royals Fan with Good Seats and Scioscia’s pointing.

At 10 minutes and 53 seconds, the announcers say “Looks like we have some sort of decision here.” Decision on what, we never really saw, which is just as well because there wasn’t anything challengeable anyway. We watch Mike Scioscia confer with the umps again, and then we watch the crew chief cast a spell to the official scorer. The game is under protest. Finally, we know.

A lot of baseball is dramatic action, and waiting around, and tight camera angles and hoping the teams we like will pull it together or stick it out. But sometimes, when we’re sitting there, baseball is being Woman Who Peaks Curiously or Confused Ned Yost or Royals Fan with Good Seats. Sometimes, when we’re sitting there, baseball is just being totally, profoundly confused because we got one shot to see the action on the field and we missed it. I was sitting 1,800 miles away in Seattle on Wednesday night doing other things, but the next day, this oddly cut broadcast made me feel like I was the gentleman in the red hat, to the left of Shoemaker in the frame below clapping madly, thrilled to be moving back toward something I understood. I had no idea what I was watching, because I felt like I was there watching baseball.

You need to be logged in to comment. Login or Subscribe
jfranco77
This is brilliant. Of course, unless MLB exists solely to provide things for Meg to write great articles about, they should probably NOT have 12 minuted delays on non-reviewable plays.
Reply to jfranco77