The Wednesday Takeaway
Until Wednesday afternoon, the Red Sox had gone a pretty long time without getting swept. In fact, they hadn’t been swept all season, the only team in baseball who could make that claim. Boston’s averseness to getting swept wasn't quite enough to put them at the top of the AL East, but they're only a couple games out and in position to claim at least a Wild Card. Less true today than it was yesterday, as the Tigers decided that it was time for the Sox to take their medicine.

Even though the Red Sox got off to a nice start, thanks to a solo homer from Dustin Pedroia in the first inning, the Tigers eventually responded by taking the lead in the third inning. Victor Martinez hit a looping single into left field to plate two runs, and James McCann hit a towering homer over the Green Monster to make it 3-1 Tigers. Just like that, the Red Sox were in serious danger of getting the broom treatment.

This game still had a few twists and turns to navigate before coming to what ended up being an exciting finish, and it included the Red Sox continuing to hit the ball long and far across Fenway Park. Xander Bogaerts ended an eight-pitch battle with Michael Fulmer by clearing the Green Monster with a solo homer to bring Boston within one in the seventh inning. In the following frame, Mookie Betts needed six fewer pitches against Fulmer to hit a game-tying RBI triple into the deepest corner of the ballpark.

The important part to remember here is that Detroit managed to escape the eighth with Betts stuck at third base thanks to Bruce Rondon striking out Dustin Pedroia with a 100 mph fastball. This ended up being important, because in the top of the ninth Miguel Cabrera got ahold of an 84 mph sinker from Brad Ziegler and sent it the opposite way and into the vicinity of a police officer sitting behind the fence.

Whatever electricity that Fenway Park had after the Betts triple was sapped after the strikeout, and whatever was left after that moment was completely wiped out by Miggy’s homer. The Red Sox went down in order in the bottom half of the ninth, and the Tigers had managed to leave Boston nice and clean after handing the Red Sox their first sweep of the season.

Quick Hits
Baseball’s premier home run artist was at it again on Wednesday afternoon. The Marlins gave the Phillies an 11-1 dismantling, and Giancarlo Stanton started off the game in glorious fashion. He made a lovely jumping catch to end the top of the first inning, and then began Miami’s offensive onslaught by attempting to give the fans in the Clevelander a souvenir. The ball bounced off of the orange wall above the club, but that’s still another picturesque dinger from Stanton.

As a team, the San Diego Padres have hit the sixth-most homers in the National League so far this season. However, you would have been hard-pressed to tab them as candidates to go on a historically long home run streak in 2016. Adam Rosales’ two-run dinger not only opened the scoring for San Diego in an eventual 8-4 win over the Blue Jays but it also tied a National League record for homers in consecutive games for a team. The 2016 Padres are now tied with the 1998 Atlanta Braves with a home run streak of 25 games, and they’re three games away from taking the record away from the 2002 Texas Rangers.

Up until the sixth inning at Wrigley Field, the star of the show was the most unlikely candidate—Anthony Ranaudo. The first special thing that Ranaudo had going on last night was a no-hitter through five innings against the Cubs. Granted, Kris Bryant brought that no-hit bid to a loud, screeching halt by slamming a solo homer out into the left field bleachers. Ranaudo eventually made it into the seventh inning and left with a line of three strikeouts, four walks, and only two hits allowed over 6 2/3 innings. That’s not bad for a debut with your new team—though for the White Sox things went downhill immediately after he departed, and the Cubs exploded for five runs in the eighth inning on their way to an easy 8-1 victory. 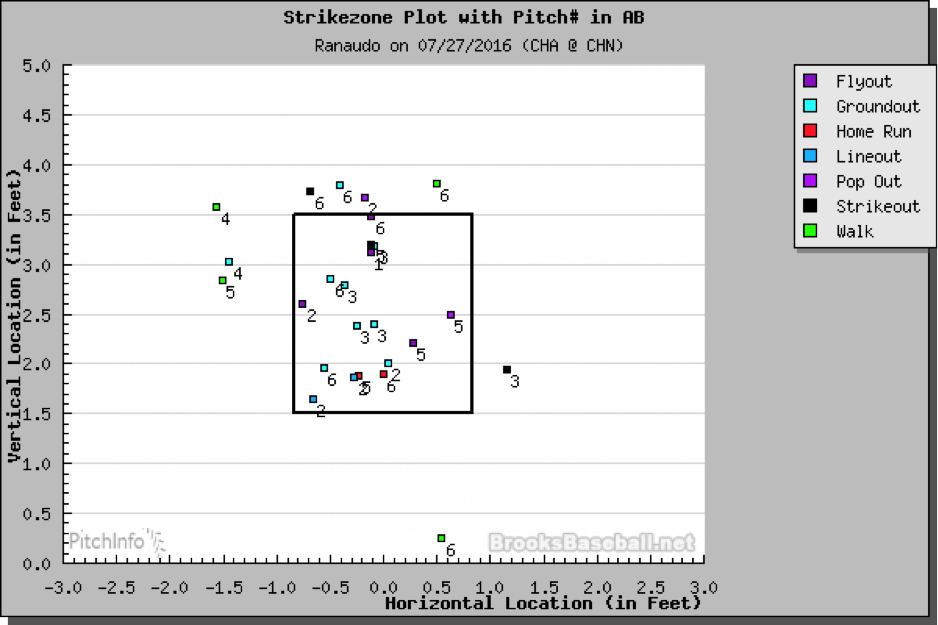 However, what made Ranaudo’s White Sox debut notable was what he did with the bat. In the top of the fifth, he picked up the first hit of his professional career. That hit also happened to fly over the fence in right-center field, so he also picked up the first homer of his professional career in one fell swoop. History was being made all over the place.

Anthony Ranaudo: first pitcher to homer in his #WhiteSox debut since Jack Salveson 6/14/1935 (Salveson was in relief)

Speaking of career firsts, Raul Mondesi Jr. recorded his first career hit on Wednesday night during the Royals’ 7-3 victory over the Angels. However, the hit didn’t come without controversy. Mondesi laid down what was supposed to be a sacrifice bunt, but Matt Shoemaker’s throw ended up in foul territory instead of the first baseman’s glove. That resulted in two runs scoring and the game tied at three with the go-ahead run on third base. Mike Scioscia argued that Mondesi was inside of the baseline as he made it to first. After 10 (!!!) minutes of review, the umpires disagreed, and the Angels played the rest of the defeat under protest.

Defensive Play of the Day
Logan Morrison fell into the stands—and the hearts of every fan of spectacular defensive plays—while making a catch on a foul pop-up from Howie Kendrick. Aside from the fantastic catch, the best part of this has to be LoMo giving the umpire a congratulatory chest-tap for being in position to make the call. Everybody was a star on this play!

What to Watch on Thursday
Thursday’s slate of games includes a Jose Fernandez start at Marlins Park, so you’re basically required to at least give the game a look. They’ll be playing the Cardinals, who will have to figure out a way to get some runs off of Fernandez, who currently has a 1.87 DRA and a 57 cFIP. Additionally, there’s the added wrinkle of Dee Gordon making his return from an 80-game suspension for PED usage.

Meanwhile in Chicago, Chris Sale will be making his return to the mound after serving his suspension for taking a blade to the White Sox’s 1976 throwbacks in a fog of frustration. Obviously, the good news here is that the Southsiders won’t be wearing those navy untucked jerseys from the 70s, so we won’t be seeing any knife action in this game. Instead, the White Sox are hoping that Sale will be able to use his four-seamer and slider to cut through the Cubs’ bats instead. Which reminds us that cutting puns will likely be in play.