The Monday Takeaway
Trade rumors have swirled around the Marlins in recent days, with most honing in on the club’s search for a starting pitcher, especially in light of worrisome injury news regarding Wei-Yin Chen. Among the arms connected to Miami were Andrew Cashner and Matt Moore, and also Jeremy Hellickson…

…who, conveniently—or inconveniently, in this case–was in South Florida with the Phillies to begin a three-game series on Monday night. Had the Fish swung a weekend deal with the Phils, Hellickson might well have toed the rubber for the home team Monday, because it was Chen’s day in the rotation. Instead, Chen was replaced by Jarred Cosart, fresh up from Triple-A New Orleans with a new delivery to show off, and Hellickson was allowed to pitch for the visitors.

Cosart more than did his job Monday, limiting the Phillies to three hits and a walk over five scoreless innings, but he was one-upped by Hellickson, who blanked Miami for six. The right-handers were polar opposites in style, with Cosart working the dirt for 10 groundball outs and Hellickson using the vast pastures of Marlins Park to get 14 of his 18 outs through the air. In the end, the results were the same, and while Hellickson struck out only one, he did not permit an extra-base hit, largely because he seldom strayed from the lower half of the zone:

Since both starters posted nothing but goose eggs on the board, this one came down to the bullpens, and the hosts’ faltered first. Fernando Rodney coughed up a run in the eighth and A.J. Ramos was torched for three more in the ninth, the former the game-winner, the latter ample insurance to put this one away.

The 4-0 shutout dropped the Marlins to percentage points below the Mets, who were rained out Monday and are 52-45 to Miami’s 53-46. Both NL East squads are 2 ½ games back of the Dodgers for the top wild-card berth and five back of Washington for first place in the division. With a contentious race on tap, the Marlins’ ability to land a reliable starter could play a critical role. As constituted now, our odds give Miami a roughly 30 percent chance to reach the postseason.

If the Fish merely wanted to see Hellickson one more time before committing to buy, they got more than they bargained for on Monday night.

Quick Hits from Monday
The Blue Jays were all set to blank the Padres yesterday, until Alex Dickerson sent a baseball where only two have gone before:

Dickerson’s blast was the 19th to reach the fifth floor at the Rogers Centre and only the second to do so on the right-field side. No hitter had visited that area of the dome since Shawn Green did it on April 22, 1999.

For the Friars, it not only averted a shutout loss, but also extended their streak of games with at least one long fly to 23. That’s the longest recorded by any major-league team since the 2006 Braves.

It was not, however, enough for San Diego to snatch a series-opening victory north of the border. Seven shutout innings from Aaron Sanchez left the Padres with a 4-0 deficit late, and Dickerson’s blast only brought them halfway back. The Jays took this one, 4-2.

It’s been a tumultuous few days on the South Side of Chicago, after Chris Sale’s weekend incident with the team’s throwback uniforms stirred concerns about the inmates running the asylum. If there’s anything that can heal wounds and mend fences among a divided clubhouse, though, it's a walkoff victory… or three.

After the Cubs rallied from 4-0 down with two runs each in the seventh and ninth innings, the White Sox went to work against the recently acquired Mike Montgomery in the home half of the final regulation frame. J.B. Shuck got things started with a leadoff single and moved over to second on a sacrifice bunt by Dioner Navarro. From there, Tyler Saladino took care of the rest:

That RBI single made the ChiSox 5-4 winners and capped the third straight walkoff victory for Robin Ventura’s bunch. It’s the first time the South Siders have won three in a row in their last at-bat since August 4-6, 1962.

Down in Texas, the A’s were an out away from snatching their series opener from the Rangers, leading 6-5 with Adrian Beltre batting, Ryan Madson pitching, and one on and one away in the last of the ninth.

Madson had been pitching well of late, and his most trusted offering was the fastball, particularly up in the zone, where recent opponents had struggled to catch up to the heat. Here’s what he told reporters after the game:

Now, let’s take a look at catcher Matt McBride’s target on the first pitch to Beltre: 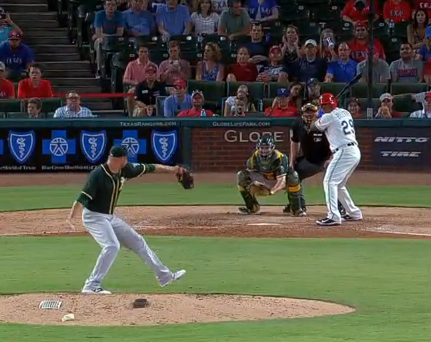 It sure looks, based on the target, like McBride wanted the fastball down and away, not up, where Madson was inclined to throw it. And now, here’s the pitch… 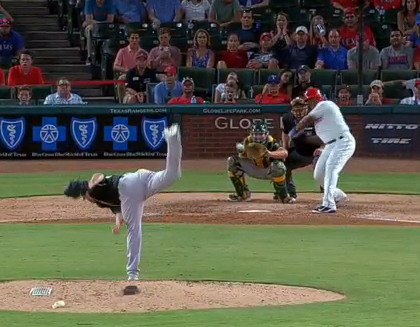 …middle-in, and right at the belt. The result was predictable:

Beltre’s second homer and fourth hit of the night flipped the one-run A’s lead into a 7-6 Rangers outcome, thrilling the crowd at Globe Life Park and leaving Madson to answer questions from a lot of reporters curious about the pitch selection to begin the fateful at-bat.

If we take Madson’s first explanation—that he wanted to try to blow one by Beltre at the letters—then it appears that the A’s battery wasn’t on the same page, and seeing the low target might’ve led to the location mistake. If we take the closer’s second answer, that he “wasn’t trying to spot” the pitch, then he got careless at a severely inopportune time. And if low-and-away was the plan all along, this was just a case of a pitch wandering away from its intended target and a hitter capitalizing on the error.

Regardless, the Rangers will take the win, which buys general manager Jon Daniels another day to figure out what to do about his question-mark-filled rotation. Martin Perez barely kept Texas in the game yesterday, surrendering five early runs (three earned) but ultimately getting through six, just good enough to enable the Beltre-led comeback and help the Rangers to grow their AL West lead to 3 ½.

Dave Dombrowski’s past collided with his present Monday, when a player he acquired from the Red Sox in 2013 pummeled an offering from the starting pitcher he brought to the Red Sox earlier this month. Drew Pomeranz tried to go inside against Jose Iglesias with an 0-1 count in the top of the sixth, but he clipped too much of the dish with the fastball and paid the price:

The Red Sox, who led 1-0 from the bottom of the second through that swing of the bat by their former shortstop, were never on top again. Justin Verlander saw to that with six innings of one-run ball, and the Tigers bullpen held the Sox to one run in the remaining three frames. Joe Kelly and Clay Buchholz, demoted to relief work after failing to hold down starting duties, were charged with a run each in the loss.

Iglesias’ first homer in 52 career games at Fenway proved to be the pivotal moment in this one, which ended Detroit 4, Boston 2.

In a rather odd scheduling quirk, the Brewers had played only one Monday night home game this season before last night. If that seems unbelievable, don’t take my word for it, take that of Milwaukee Journal-Sentinel beat writer Tom Haudricourt:

Yesterday’s tilt against the Diamondbacks was Milwaukee’s fourth Monday contest at Miller Park, but two of the previous three—Opening Day and Memorial Day—had been played in the afternoon. Their only other Monday night game in Wisconsin was an 8-5 victory over the Angels back on May 2nd.

While this was the Brew Crew’s first Monday night home game in nearly three months, it was the first major-league game of any kind for D’backs starter Braden Shipley, one of three notable prospects—along with the Rockies’ David Dahl and the Astros’ Alex Bregman—to debut yesterday. All three of them are now 0-1 as major-leaguers.

Shipley’s initiation came early, courtesy of Scooter Gennett, who launched the right-hander’s fourth pitch off the base of the scoreboard in deep center:

Shipley’s lingering hopes of redemption came crashing down in the sixth, when Martin Maldonado clobbered a three-run missile to left:

Those were two of Milwaukee’s four taters in the 7-2 romp. Shipley was charged with six earned runs in 5 1/3 innings, walking four and fanning four while serving up three jacks. The Brewers are now 2-0 in Monday night home games and 40-55 in all other contests this season.

Home-run-stealing catches are kind of a big deal in one-run games, so Melky Cabrera gets this one for dashing Kris Bryant’s first-inning dinger dreams:

A little over seven years ago, the Blue Jays selected Ryan Schimpf with the 160th-overall pick (fifth round) in the 2009 First-Year Player Draft. Earlier this season, Schimpf became the eighth player—and fourth position player—from his draft round to reach the majors. And despite taking the scenic route through the minor leagues, Schimpf is already second among those four in career home runs, trailing only the 147th-overall selection that year, Brandon Belt.

Following seven years in the Jays’ system, Schimpf signed with the Padres as a minor-league free agent, receiving an assignment to Triple-A El Paso after spring training. He raked to the tune of a .355/.432/.729 slash line there, leading the sluggalicious Pacific Coast League in slugging, prompting the Friars to call him up and see what they had. And what they’ve had so far is essentially a 5-foot-9, 180-pound Adam Dunn:

There are differences beyond physique between rookie Dunn and first-year Schimpf, to be sure. For one thing, the second baseman has actually provided more power than the big outfielder despite playing in a less-hitter-friendly home park. On the other hand, Schimpf has also struck out more often. But the point remains: The Padres have found themselves a three-true-outcomes fiend who, if you go solely by height and weight, looks nothing like a three-true-outcomes fiend should.

It’s too soon, at this stage, to know whether Schimpf’s Adam Dunn act is sustainable, with the 106-plate-appearance sample containing indicators that lead in either direction. But this week, with the Padres visiting Toronto, the Blue Jays get to see firsthand what they lost in minor-league free agency last winter. The lefty-swinging LSU product gets three right-handed starters to try to feast on at the Rogers Centre, with Marcus Stroman taking on Andrew Cashner—in what might be the latter’s last start as a Padre—tonight (7:07 p.m. ET).

Remember Tyler Skaggs? The last time he appeared in a major-league game, the opposing Orioles’ lineup included Nick Markakis, Nelson Cruz, and Delmon Young. And Skaggs shut the O’s down that day, firing 4 2/3 hitless innings over which he struck out seven. Unfortunately, while doing so, the left-hander tore the ulnar collateral ligament in his elbow, requiring Tommy John surgery that, along with an early-2016 shoulder ailment, KO’d him from big-league action for very nearly two full years. Now, in a much-needed dose of good news for the Angels rotation, Skaggs is ready to return.

Still just 25 years old, Skaggs showed swing-and-miss stuff over his prolonged rehab stint, racking up 53 strikeouts against just eight walks in 39 1/3 innings. He also permitted just 26 hits in those nine starts, seven of which came at the Triple-A level, where Skaggs toiled in the perilous bandboxes of the PCL. Skaggs’ big-league return comes in Kansas City, where he’ll take on the Royals in the middle match of a three-game set. Dillon Gee goes for KC. (8:15 p.m. ET).

You need to be logged in to comment. Login or Subscribe
bobstuart
Dickerson was third to RF fifth deck in Toronto. Carlos Delgado first on July 19, 1998
Reply to bobstuart