Any matchup between two of the league’s best hurlers is cause for excitement, but with questions surrounding both Noah Syndergaard’s health and Jake Arrieta’s recent rut, the intrigue meter was turned up to 11 at Wrigley Field last night. In the end, fretting Mets and Cubs fans mostly saw what they wanted from their respective aces, and those who tuned in hoping for a fine duel were the happiest of all.

Arrieta, who’s endured fits of erratic command and control this year, seeing his walk rate shoot up from 5.5 percent in 2015 to 9.3 percent in the year to date, had no such trouble with his location Tuesday. He came out pounding the zone, booking strikes with 18 of his first 19 pitches and 27 of his first 29. The Arrieta who pitched in the series opener was supremely confident in his power stuff,

and while his command wasn’t pristine, most of the misses went unpunished. As a result, Arrieta needed just 85 pitches to complete seven innings, in which he scattered five hits and a walk, permitting just one run and fanning eight. That marked just the second time since April 16th that the righty has recorded at least eight Ks and paired them with no more than one base on balls. He had six such outings last year, and a 73-to-7 K:BB ratio across his last nine regular-season starts.

Syndergaard was gone long before Arrieta called it a night, but he was nearly as effective through his time on the bump, after rolling out of bed with 99-mph gas,

reaching back for 101 early on, and sustaining that high-90s heat through around his 85th pitch. That’s around 10 pitches later than manager Terry Collins suspected his starter’s velo might slip, seemingly a positive indicator, though one that could foretell more abbreviated outings in Syndergaard’s near-term future.

On Tuesday, a 105-pitch allotment only got Thor through 5 2/3, in part because of some shoddy center fielding by Curtis Granderson, and in part because he didn’t get ahead of the Cubs as reliably as Arrieta buried the Mets, throwing just 12 of 25 first-pitch strikes. The visitors gladly took eight strikeouts and just one (unearned) run allowed by Syndergaard, though, a strong-enough effort to keep them in the game against Arrieta, who he battled to a 1-1 draw.

The flame-throwing persisted at Wrigley, even after the bullpens got involved, as all but one of the seven pitchers who appeared Tuesday registered 96 or higher on the gun at least once. Jerry Blevins was the lone exception, sitting at a paltry 91-92, but he got Miguel Montero to fly out with Willson Contreras in scoring position to end the sixth, preserving Syndergaard’s hard-earned tie.

It was all square until the top of the ninth, when Rene Rivera atoned for an early throwing error by staying inside of a 97-mph hardball,

poking a single into right for the game-winning RBI in the 2-1 Mets win.

As the Yankees sort out whether they’re buying or selling, with the latter likely in the lead despite resistance from ownership and Tuesday’s 7-1 victory over the Orioles, most players on the block are evident. Aroldis Chapman and Andrew Miller are there for clubs seeking a closer, Nathan Eovaldi and Ivan Nova are available for back-end rotation help, and those in search of a bat might inquire about Carlos Beltran.

But the Yankees have several other assets who aren’t as frequently featured on the rumor mill, and one of them is raising his stock significantly as the deadline approaches. Batting against Mychal Givens in the eighth inning yesterday—after Eovaldi held the O’s to one run in 5 2/3 innings despite only striking out one—Chase Headley got a hanger and did not miss it:

The two-run shot to right made it 7-1 Yankees, the eventual final score.

For Headley, it was home run no. 9 of the season, noteworthy because his first extra-base hit of any kind didn’t come until May 12th. Between that date and the start of play yesterday, Headley was batting .284/.354/.476 in 212 plate appearances. He then added the eighth-inning homer and a walk in a 1-for-3 night.

After struggling to drive the ball anywhere for a month and a half, 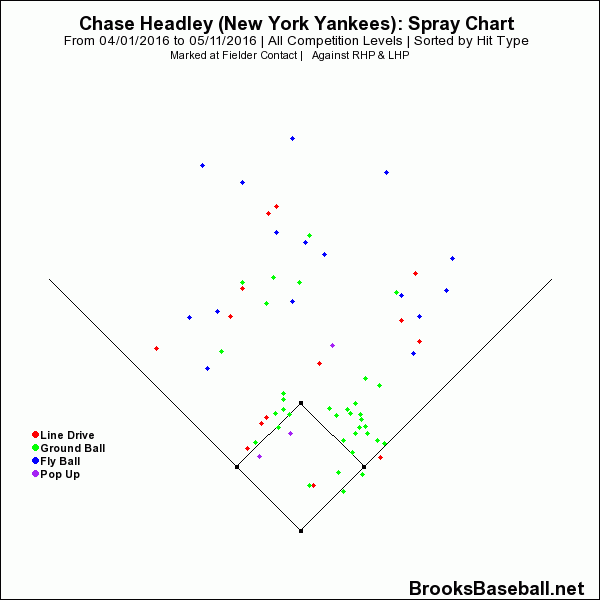 the switch-hitting Headley is once again hitting the ball with authority: 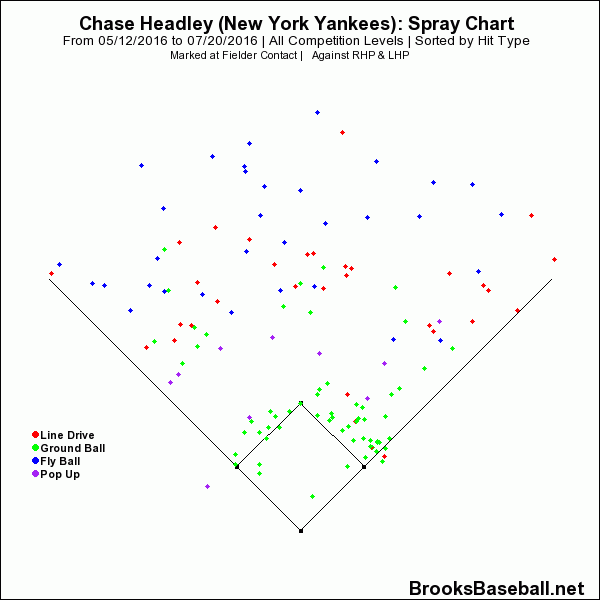 Viewed differently, Headley’s average exit velocity on fastballs and the like has gone up by more than six mph, from 86.07 in April to 92.12 thus far in July. 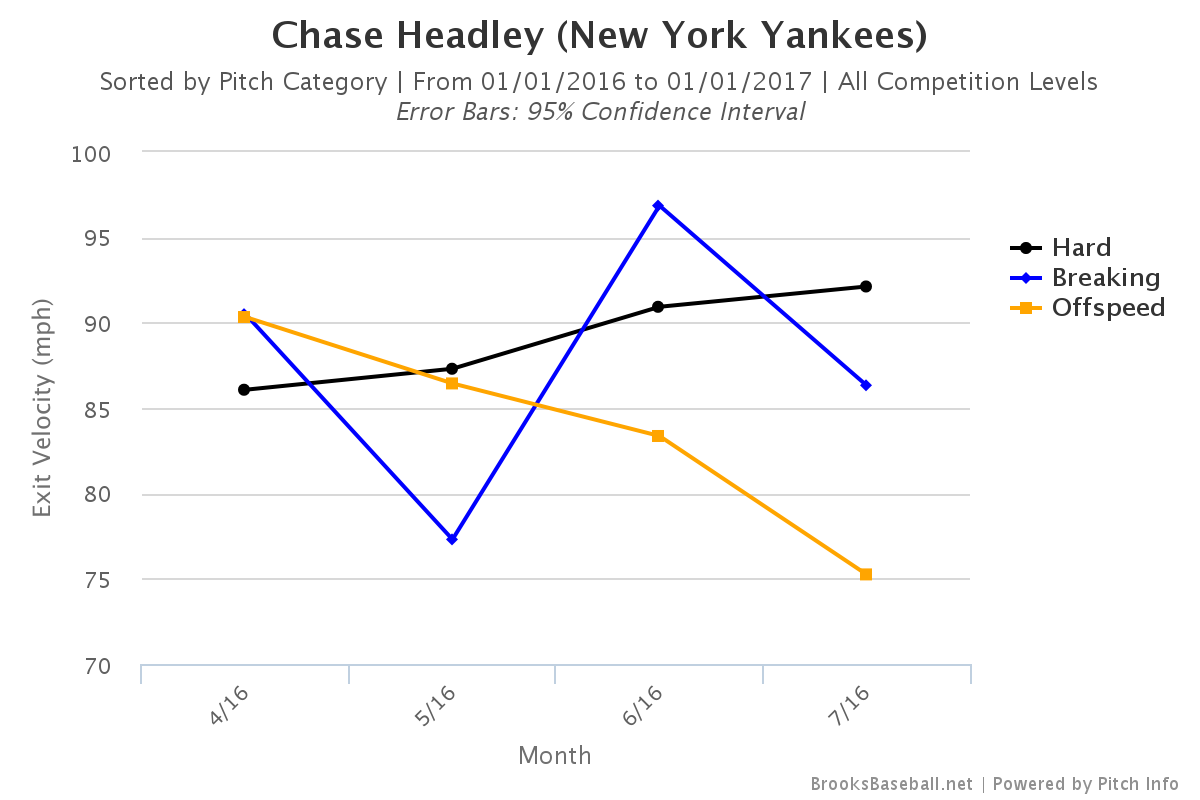 And now, his four-year, $52 million contract—which’ll have two years and $26 million left at season’s end—is looking less like a lemon and more like an asset.

If teams needing corner-infield help buy into the resurgence, Headley might join Beltran and the arms on their way out of the Bronx before August 1st.

With Joe Ross still on the shelf, the Nats called upon one of their most heralded pitching prospects Tuesday and tasked him with quieting the Dodgers in the series opener at Nationals Park.

Three batters in, there were two other runners aboard, and Lopez was already getting a visit from pitching coach Mike Maddux. Still, come the fifth inning, when the right-hander left with two away, the fans in attendance saw fit to shower Lopez with a rousing ovation.

As with most any major-league debut, Lopez’s had ups and downs. His were just historically extreme. There was the home run by Utley and nine other knocks. But there were also hellacious hooks like this one,

which had the red-hot Yasmani Grandal looking foolish on a check-swing strike three.

And that’s how Lopez wound up with one of the most bipolar debuts ever:

Reynaldo Lopez is the first pitcher since at least 1913 to allow 6+ runs AND strike out 9+ batters in his MLB debut.

Nationals fans witnessed firsthand both the tantalizing potential and the development still ahead, with the latter unfortunately overshadowing the former in an 8-4 Dodgers victory.

What do Pat Rapp, Hideo Nomo, Oliver Perez, Randy Johnson, Roy Oswalt, Matt Cain, and Cory Luebke have in common? Until Tuesday, that seven-man motley crew represented the whole lot of pitchers who’d marched their teams into Coors Field and given up no more than one hit in six-plus innings of work.

Now, they’ll have to make room for one more. Last night, Blake Snell became the eighth member of the club, and the third rookie, joining Perez and Luebke as the only freshmen in the group.

There were few questions about the 23-year-old’s arsenal when he arrived in the majors this spring, with most cynics pointing to his control, a wart that surfaced with 17 walks in Snell’s first 31 2/3 big-league innings. The southpaw issued three more free passes Tuesday. But since the Rockies—save for Charlie Blackmon, who led off the fourth inning with a single—couldn’t hit him, the Rays had no reason to complain.

Fastballs up, breaking balls down was the recipe here—and while some of the heaters were a mile high and some of spinners went just 58 feet, Snell’s stuff more than withstood the mile-high air.

Meanwhile, the Tampa Bay offense lit up Tyler Chatwood for seven runs in three innings, and went back to work in the ninth inning against mop-up man Gonzalez Germen, who served up a two-run shot to Steve Pearce, fresh off the DL.

A dinger and a web gem:

Or, as Francisco Lindor calls his efforts in the Indians’ 7-3 romp over the Royals, “Tuesday.”

Kyle Hendricks has a 0.72 ERA over his last five games, including four starts and a two-inning relief appearance. What’s the catch? Well, for one thing Hendricks has a .194 BABIP over that stretch. For another, his K:BB ratio is just 16-to-10, and he’s drilled a couple of batters in those 25 innings, as well. And, on top of all that, there are five unearned runs lurking in the background, for which the Cubs’ typically excellent defense is only partly to blame. In other words, the right-hander’s ERA is ripe for regression, and the 26-year-old’s 99 cFIP suggests it might come soon. The Mets will hope that Hendricks’ luck turns this afternoon at Wrigley Field, where Terry Collins is set to send Bartolo Colon to the bump to oppose him in the series in the series finale (2:20 p.m. ET).