A reminder of why we’re here: Clayton Kershaw, master of command and everything else, throws roughly as many pitches right down the friggin’ middle as any other pitcher. He is, however, far less likely to see those pitches get hit hard than any other pitcher. The implication is that there is something about Kershaw’s dominance that goes beyond hitting his spots, and (because Kershaw doesn’t throw any harder than many mediocre pitchers) beyond raw stuff.

For this series, we refer to down-the-middle pitches as Zone 12 pitches, because of their location in the PITCHf/x zone charts. And, as we’ve shown in previous weeks, Kershaw’s rate of Zone 12 pitches has been about 5 percent; in May he threw many more Zone 12 pitches, while also producing one of the greatest (maybe the greatest) month of pitching we’ve ever seen with our own eyes. Historically, Kershaw allows a SLG of about .430 and gets a whiff on 22.5 percent of swings at Zone 12 pitches. Most pitchers, even great ones, allow figures closer to .600 and 10-12 percent, throwing 5 to 6 percent of their pitches there.

This month in Zone 12 pitches:

Kershaw made five starts in June, and threw 35 pitches in Zone 12. That’s 7 percent of all pitches, which means his May spike held for another month. Clayton Kershaw, at the moment, doesn’t just throw a normal amount of pitches down the middle, but more than just about any pitcher in baseball. Batters, wisely, swung at most of them—29 of them, in fact. Only three times did they whiff, comparable to the whiff rate on the rest of the league’s pipe shots. They put 13 of those balls in play fair, and only three of those 13 landed safely; all were singles. Clayton Kershaw threw 35 pitches right down the middle and batters slugged .313 against him (including third strikes). They slugged .231 on the ones they actually put in play.

It’s All-Star season, which means it’s time for everybody to talk about skills competitions they would like to see at the All-Star break. I’m on record as being strongly against skills competitions. Most baseball acts are either uninteresting (“look at those fast guys runs” breaks down when you think of how we want to watch truly fast guys run only once every four years), or only interesting in the context of a baseball play, e.g. strong throws. But I have a skills competition I’d love to see, if it were practical: Best pitchers throw pitches right down the middle against the best hitters. While control of the strike zone, making batters chase, laying off tough pitches, etc. makes for a strategically rich sport, it’s also sort of boring, right? You have to really care (and, thankfully, we do) to want to repeatedly watch six or seven pitches of cat-and-mouse games as pitchers try to avoid throwing a pitch anywhere near the batter’s actual reach.

More entertaining for the casual fan, I would argue, is seeing a great pitcher challenge a great hitter with pitches down the middle. And this month, with Kershaw, we got to! Because in addition to throwing Zone 12 pitches to Andrew McCutchen, Paul Goldschmidt, Brandon Belt, Freddie Freeman and Gregory Polanco, Kershaw threw back-to-back Zone 12 pitches to Bryce Harper. This is what baseball looks like when that happens.

The first Zone 12 pitch comes on the first pitch of the first at-bat between Harper and Kershaw on June 20. Harper has seen about 200 fastballs on 0-0 this year, about half of which were called balls; of the other 100, Harper has swung at around 60 percent, so he’s certainly not waiting around for a pitch later in the at-bat. Kershaw misses location, not by much, but in the wrong direction: 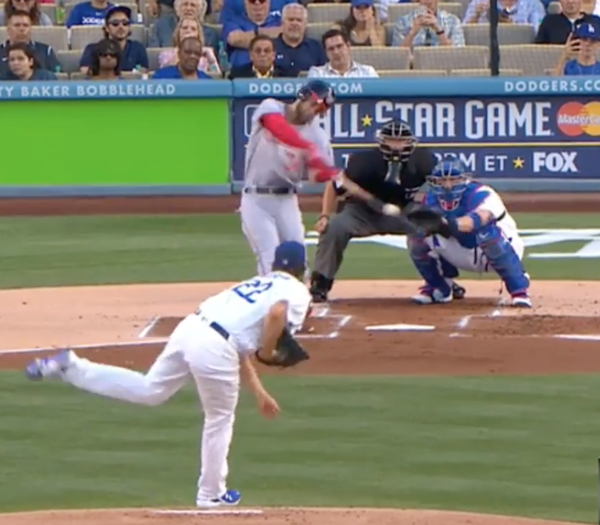 This looks ugly; this looks like Kershaw falling into a first-inning hole. But Harper was actually just a little bit late on it and pops a foul back. The difference between the still and the GIF is pretty much this entire series in one mystifying, unsolvable nutshell: 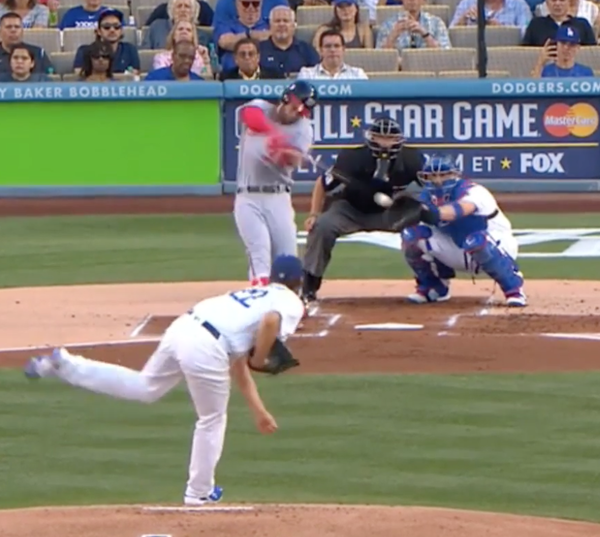 This time, the still doesn’t favor Harper so much; he's way ahead, and on the GIF it’s easy to see how tied up he was, almost falling backward as he unloads his swing.

Now ahead 0-2, and having survived his two pitches in the zone to Harper, Kershaw gets to noodle around, 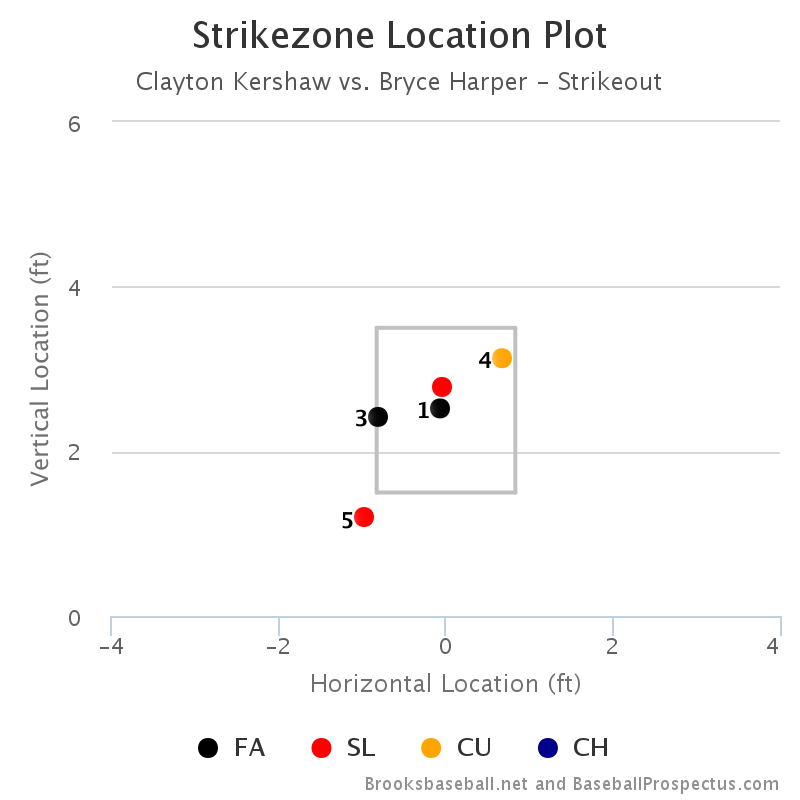 as Harper is way late on an 0-2 fastball, then gets disjointed on a hanging curveball, then flails desperately at a slider that nearly gets dirty. 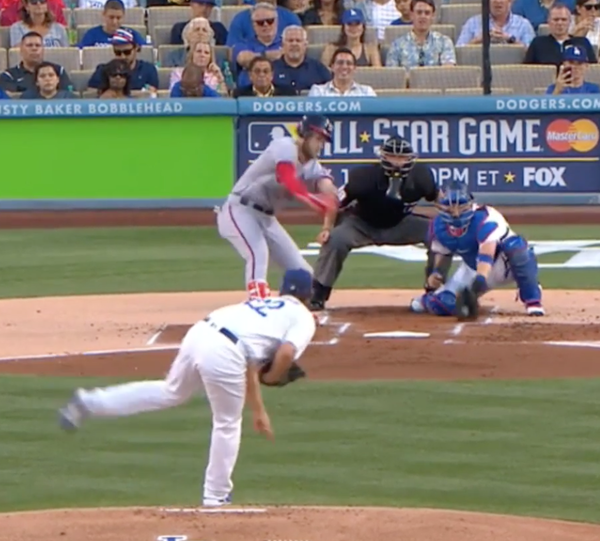 The final three pitches are a classic Kershaw dissection—painted fastball, disorienting loopy curveball, buried slider. But it’s really the ability to survive the first two that wins the battle for Kershaw, putting Harper in a deep hole that turns his next three swings ugly as he attempts to protect against everything. Kershaw produced a pretty good three-pitch sequence, but by that point the best left-handed hitter in the world was playing from behind, with all the disadvantages that comes with.

Those were not the first two Zone 12 pitches Kershaw had ever thrown Harper. In 2015, he threw three:

Credit to Harper for putting a real good swing on the curveball. But we’ve now got six instances of Clayton Kershaw putting the ball down the middle against one of the best hitters… ever? And getting three swinging strikes, two pop fouls and a solid groundout. Maybe it's impractical for logistical reasons, but tell me you wouldn’t watch a few hours of this on All-Star Monday.