The Monday Takeaway
There were eight major-league games played yesterday, and half of them featured a team scoring double-digit runs. Only one of them chased the opposing starter in the first inning, though, and that same team’s skipper was gone by the fourth. That’s ample reason to begin this recap in Detroit, where there was a whole lot offense accompanied by a whole lot of ugly on Monday night.

Jose Berrios took the hill in the last of the first and figured, “Ah, I’ll just groove a fastball for strike one.” Little did he know that Ian Kinsler was locked, loaded, and ready to fire:

That first-pitch, leadoff homer was a harbinger of the calamity to come for Berrios. The rookie promptly walked the next two batters, before Nick Castellanos singled in a run with one away. Berrios then struck out Justin Upton, but he proceeded to issue two more walks after that, the second with the bases loaded. That brought Jose Iglesias to the plate, just in time to deliver the deathblow to the right-hander’s outing:

Iglesias’ three-run two-bagger, which was only a few feet shy of being a grand slam, made it 6-0 Tigers and sent Berrios packing. Then, reliever Pat Dean served up back-to-back doubles, followed by a Miguel Cabrera single, and it was 8-0 after one.

Before proceeding, let’s close the book on Berrios: two-thirds of an inning, three hits, seven runs (all earned), four walks, and one strikeout. He threw 39 pitches, and only 18 of them were strikes. According to the Baseball-Reference Play Index, that makes Berrios the first Twins pitcher to be charged with seven or more earned runs in less than an inning of work since Liam Hendriks in 2013. But here’s the thing about Berrios’ plight: He wasn’t the losing pitcher in Monday’s game.

Tigers starter Jordan Zimmermann wound up with a doozy of a line, too, because just moments after his offense handed him an early ocho, he gave a quarter of it right back:

And then, one inning after Kurt Suzuki went yard, Miguel Sano did, too:

One frame after that, the Tigers defense got in on the fun. A whoops here

and a derp there

made it 8-7. Those errors and the ever-narrowing lead put Tigers manager Brad Ausmus on edge, so when home-plate umpire Doug Eddings rang up Castellanos to end the fourth,

the skipper and his hoodie had seen enough. As it turned out, Ausmus took a hike in time to miss the Twins coming all the way back to tie the game… on a dropped flyball:

Fortunately for the Tigers, while Ausmus was no longer around, Castellanos still was,

and his eighth homer of the year put the home nine back on top. It also would ultimately make a loser out of Dean, the long man who gobbled up 5 2/3 innings and only allowed one run after escaping the first, namely that Castellanos blast. Along the way, Dean scattered 10 hits, thereby becoming the first reliever to give up double-digit knocks in a major-league game since ex-Twin and then-Ranger Scott Baker on June 9th, 2014. The last pitcher to do it while wearing a Twins uniform had been Frankie Rodriguez, on August 11th, 1997. But to find the last reliever to give up 10 hits and suffer the loss, you’d have to go all the way back to Chuck Porter, who had the misfortune of working innings 18 through 25 in a 7-6 marathon on May 8-9, 1984.

This one packed all the aforementioned madness into nine innings, seven of which were completed by Zimmermann, who gave up eight runs (seven earned) on 11 hits while striking out nine and walking none. The righty pounded the zone, throwing 27 first-pitch strikes to his 33 foes and 84 strikes in 109 pitches overall, which enabled him to last well into the game even as the Twins edged ever closer. Thus, Zimmermann became the 18th pitcher since 1913 to go at least seven, give up at least 11 knocks and eight runs, and punch out at least nine, and the first to check all those boxes since Curt Schilling on June 22nd, 1998.

After Zimmermann departed, Justin Wilson and Francisco Rodriguez nailed down the 10-8 victory for Detroit.

While the Tigers stuffed the bulk of their run-scoring into one inning, the Rays spread it across four—the first four, which made for a miserable Monday for J.A. Happ and the Jays.

and Tim Beckham helped put a “3” next to that “2” in the line score with this two-run bomb in the second:

Two singles and a walk sent Happ to the showers with nobody gone in the third, and the lefty watched helplessly as Curt Casali unloaded off Dustin Antolin to make the line read “2 3 4.”

That’s 9-0 Rays, if you’re counting at home, and seven runs charged to Happ, who’d only been charged with 11 in his first seven starts combined. The problem Monday wasn’t hard to spot:

Lots of fastballs down the chute, a no no in any park, but particularly at the Rogers Centre, where those tend to yield big flies and crooked numbers on the scoreboard. Speaking of which, the Rays tacked on a couple more runs in the fourth inning, and while they fell short of making it “2 3 4 5,” an 11-0 lead would do just fine.

It was all John Gibbons needed to see, anyway, as he joined Ausmus in the arguing-balls-and-strikes support group after Troy Tulowitzki took a borderline 3-2 pitch from Drew Smyly and got punched out by plate ump Mike Winters:

Over in Cleveland, the opening battle of the war of Ohio went to the Indians, who scored 15 times while the Reds plated only six. The most innovative of those Tribe tallies was recorded by Rajai Davis, back in the fourth inning, when the Indians were mounting a threat to break a 4-4 tie. Jason Kipnis lined a pitch into right-center field, scoring the go-ahead run from third, while Davis—who took off from first with the pitch—motored 270 feet before sliding kneeling on home plate:

Davis was initially called out, but replay revealed that he had, in fact, avoided the catcher’s tag and dipped his foot onto the dish as he flew by. The call was overturned to safe, and Davis got away with not sliding, as the Indians went up 6-4:

Take it away, Billy Burns:

And by “it,” we mean a single from Nomar Mazara. That knock would’ve forced rookie Sean Manaea to work harder for his 6 2/3 innings of one-run ball last night, an excellent bounce-back from the southpaw’s drubbing in Boston last week. Manaea struck out three and made full use of the Coliseum’s generous dimensions, getting 12 outs through the air.

The A’s scored twice in the fourth inning and tacked on an insurance run on Marcus Semien’s 10th home year,

before the bullpen secured the 3-1 win.

Power stuff won’t be in short supply tonight, when the Nationals and Mets meet for the first time this season in the series opener at Citi Field. Max Scherzer, you might recall, matched a major-league record by striking out 20 Tigers his last time out, and if he could just figure out how to stop serving up homers—11 of them, to date, in 52 innings—the righty would be all set. Syndergaard also watched a pair of long flies his last time out, but those were the second and third that he’d allowed all season, and he worked eight innings in a win at Dodger Stadium nonetheless. This one has all the makings of a duel you won’t want to miss (7:10 p.m. ET).

The Tigers and Twins will play game two of a three-game set this evening, and when they do, the field will feature the two worst ground-ball defenses in baseball. Opponents are batting .277 on worm-killers against Detroit pitching, which would be dead last if it weren’t for the Twins, who are generously permitting a .280 average on the ground. Minnesota’s effort is almost 100 points worse than that of the league-leading Cubs, who are holding foes well below the Mendoza line at .186. All of that’s unfortunate for Phil Hughes, who’s worked on upping his ground-ball rate and has finally gotten it over 40 percent, only to watch one-third of those bouncers and rollers squeak through the infield in the early going. Hughes will hope for better help from the crew behind him as he squares off with former teammate Mike Pelfrey at Comerica Park (7:10 p.m. ET).

Finally, end your night with a dose of Clayton Kershaw, described by Vin Scully, in the second of four contests in a home-and-home series between the Angels and Dodgers. For those who thought Kershaw was running out of ways to impress, well, we’re in mid-May now and his walk allowance for the season stands at four. In fact, just 25 of the 225 batters that the southpaw has faced in 2016 have so much as earned a three-ball count, an 11.1 percent clip that’s better than the 11.9 percent career rate of one Gregory Alan Maddux. Put differently, on average, only one batter has reached a three-ball count versus Kershaw each time through the order. Only one opponent has been lucky enough to see a 3-0 count with Kershaw on the mound this year, and that was Hunter Pence on April 9th. And the funny thing about that is…

…oh. Now, to be fair to the plate umpire in this case, Brian O’Nora, Kershaw missed his down-and-in target by a good deal, forcing the catcher, A.J. Ellis, to reach back across his body, 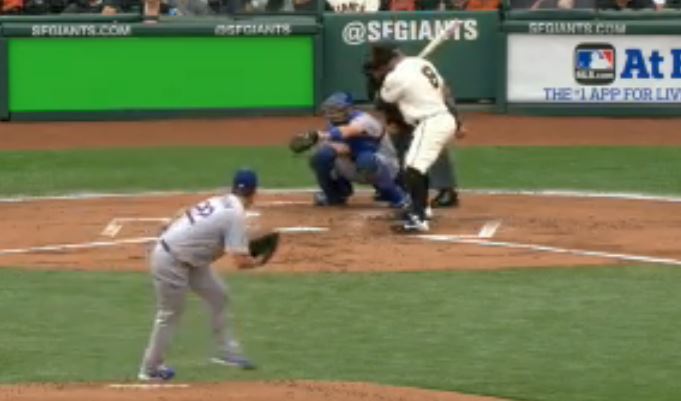 which is most likely what cost him a strike. Nonetheless, Kershaw is that umpire whiff away from having gotten through eight starts without going down 3-0. And with the Angels—who are second-to-last in the majors at 3.70 pitches seen per plate appearance this year—in town tonight, he has an excellent opportunity to run his active streak to seven (10:10 p.m. ET).

You need to be logged in to comment. Login or Subscribe
PastorStephen
Am I reading the Kershaw strike zone plot correctly? Every one of those 4 pitches could have been called strikes--and 2 of them clearly should have--yet, they were all called balls.
Reply to PastorStephen
statsrath
You sure are.
Reply to statsrath
GBSimons
It's a real shame when a pitcher misses his target and puts the ball in practically the dead center of the strike zone. Yep, that really should be called a ball.
Reply to GBSimons
onegameref
It must be something for hitters to have to deal with a pitcher with the overpowering stuff as Kershaw and yet he doesn't reward patience either since he fails to throw balls often. Maybe try reading fastball and swinging your hardest and hope to run into one would be a good play. It might explain why the occasional pitcher has hit a HR off of him since they don't really think about how to approach him and swing without a plan.
Reply to onegameref
GBSimons
This seems as good a place as any to throw out this idea. How about, when there's a reviewed call, the umpire in NY is NOT told what the call on the field is. He just makes his best judgment of safe/out, fair/foul, whatever without the bias of what the umps on the field ruled. That seems like a better system to me.
Reply to GBSimons