I sometimes spend a lot of time behind the wheel, and when there isn’t a game on, I often listen to MLB Network Radio. I like some of the shows better than others. Some have strong elements of sportstalk radio, and like all sportstalk radio, you sometimes hear things that are, well, interesting.

Now, I don’t want to get into a fight over clutch hitting. Much smarter people have debated this. Some aren’t buying it. Others think there might be something there. It’s easy to get lost in the fog. So I’m going to sidestep the whole clutch thing and instead look at the simple question: Are some players better at hitting with runners in scoring position?

To check, I looked at every batter with more than 400 plate appearances (a round number that’s convenient not only because it implies a more-or-less regular player, but also because it gives a nice sample size of 200 or so players per season) for every year in the 30-team era, 1998-2015. That gave me 3,831 player-seasons. For each, I checked whether a batter was better than average at batting with RISP.

I had to figure out a batting metric to use. With RISP, the goal is to drive the runner home. That reduces the value of walks and hit batters (unless the bases are loaded) relative to base hits. Extra-base hits drive in virtually all runners, as do singles with a runner on third, while runners on second scored on 59 percent of singles last year. To synthesize all of this, as well as runners scoring on outs (sacrifice flies and groundballs with the infield back), I developed RISP-specific run expectancies and correlated them to familiar measures of batting (batting average, on base percentage, slugging percentage, and OPS). The correlation with slugging percentage was higher than for any other metric, so I checked whether batters have a better slugging percentage with RISP than they do in other situations.

Then, to see whether batters were, in fact, consistently better with RISP than not, I paired consecutive seasons. For example, in 2014, Mike Trout had a .615 slugging percentage with RISP. The major-league average was .386. In 2015, he slugged .693 with RISP compared to an average of .405. So he gets credit for repeating.

Before I show you the data, let’s figure out the ground rules. If there are players who are consistently better with RISP than not, we should see a majority repeat year to year. If it’s a 50/50 shot, like a coin flip, we should see about half of them repeat. If there’s a bias against repeating, less than half will repeat. So how many of the 400+ plate appearance batters who are better than average with runners in scoring position repeat? Quite a few, it turns out:

But wait. This isn’t really right, is it? It’s comparing batters with 400 or plate appearances in a season—by definition, those good enough to play in most of a team’s game—with all batters. It includes the batting performance of Trout and Bryce Harper and Manny Machado, but it doesn’t include the batting performance of Mike Zunino and Pedro Florimon and Jon Lester. That’s a significant omission. Last season, as noted, major-league hitters slugged .405 with RISP. But the 211 players who amassed 400 or more plate appearances slugged .431 with RISP. That’s a big difference. So let’s do an apples-to-apples comparison of slugging percentage with RISP for hitters with 400 or more plate appearances in a season with the overall average slugging percentage with RISP for that group. That’s a different picture:

Hmm. That’s closer to the 50/50 coin flip probability of repeating—well above it some years, but close to or even below it in others. So maybe there aren’t batters who consistently do better with RISP?

Well, maybe. But let’s look at it another way. The guy on the radio didn’t say that there were batters who were consistently above average at batting with RISP. He said there were batters who were consistently better with RISP. Last season, for example, Mark Teixeira slugged a .509 with RISP. That’s good! But had a higher slugging percentage when there weren’t RISPs. On another extreme, his teammate, Didi Gregorius,slugged .361 with RISP, but that was higher than his slugging percentage without RISP. So, do some hitters consistently do better with RISP, regardless of their baseline? Here are the data:

As with the prior tables, there’s been a blip the past couple seasons, but overall, there doesn’t appear to be a trend here. It’s looking a lot like a coin flip. When a player posts a slugging percentage with RISP higher than his slugging percentage without RISP in a season, it’s just about 50/50 whether he repeats the next season. That’s more indicative of randomness than a trend.

Well, maybe not. Let’s give it one last try. True, the percentages are all pretty close to the coin flip result of 50 percent. But they're not exactly 50 percent, and some are higher. So maybe there are just a few players who really do exceed by posting slugging percenages with RISP consistently above their overall averages, but they get lost in the randomness for everybody else. 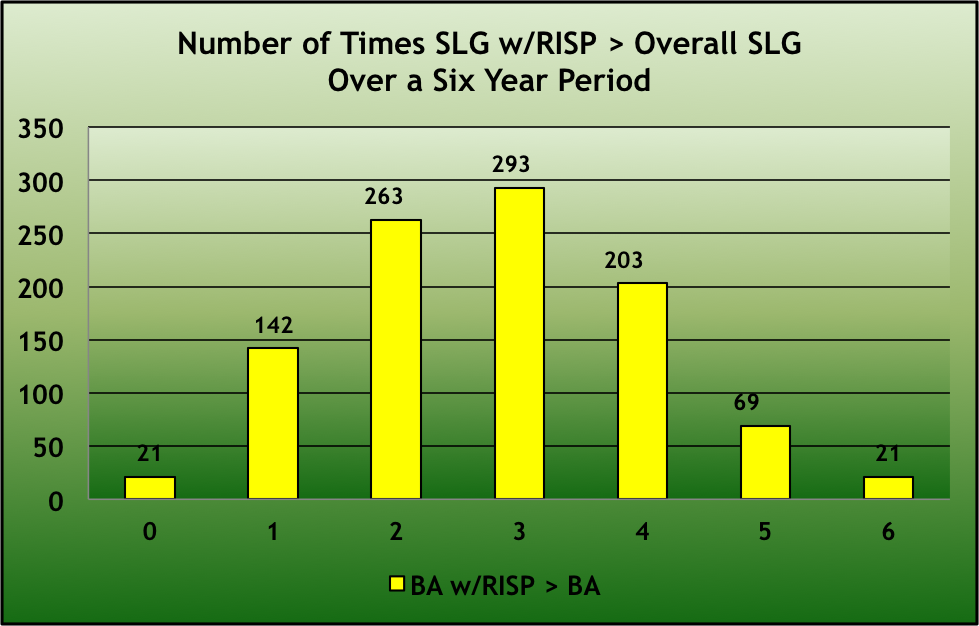 This seems to lend some credence to the idea that there are a few hitters who really are consistently better with RISP. And there’s a handful that are consistently bad. Most hitters fall in the middle, but some are at the extremes. So maybe there is something there!

But wait. Look at that graph long enough, and you may have a flashback to a probability and statistics course you took in college. That distribution looks something like…What was it again?…Oh yeah. 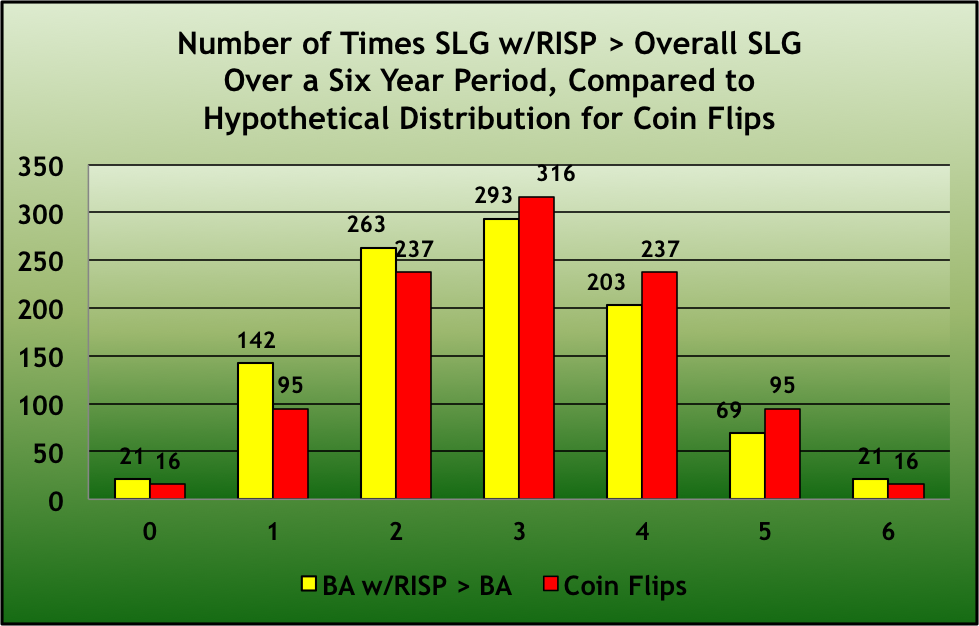 That’s it. You flip a coin six times, it’ll come up heads six or zero times 1.6 percent of the time, five or one time 9.4 percent of the time…I’ll stop. Do it 1,012 times, and you’ll end up with the red bars above. Yes, there were 21 six-year streaks during which a player slugged higher with RISP than not every year. But that’s almost exactly what we’d expect from a 50/50, coin flip type of environment. In fact, the shape of the graph, with the actual yellow bars longer than the theoretical red bars at on the left side of the graph, representing batters who fail to out-slug with RISP, more often than not, suggests that having a higher slugging percentage with RISP than in other at bats is not only a coin flip, but a coin flip using a biased coin!

The flip side, here are the 12 players who account for the 21 streaks of six straight years with a worse slugging percentage with RISP:

You need to be logged in to comment. Login or Subscribe
BRodJax
There's also one other hidden reason why batting with RISP would be generally higher than non-RISP overall: bias in the skill of the pitcher faced. In theory, a pitcher who has allowed a RISP isn't pitching as well as a pitcher without a RISP, almost by definition. In an aggregate sense, when a batter has a RISP during his AB, he'll be facing a pitcher whose "stuff" isn't as strong, at least on a micro-level (that game, or even just that inning). Put another way, the RISP has revealed some level of skill about the pitcher, and all else equal, you'd want to face pitchers with RISP because they're likely not pitching quite as well.

I'm intentionally ignoring the idea that a reliever could be brought in to face the new batter - the reliever is supposedly an inferior pitcher (that's why he's not starting), but he is being brought in because he's supposed to be better than the original pitcher at that time (that's why the first guy was pulled). It's not clear which direction this would push the RISP argument, but my completely idle, non-scientific theory would be that it would still be a net boost for batters' RISP stats.
Reply to BRodJax
newsense
You are making a big assumption here that on average hitters will have the same SLG with RISP as without. I don't think that's true. Pitchers will change their approach w/RISP. For example they may be focusing more on getting a strikeout rather than pitching to contact.
Reply to newsense
mainsr
Hey brodriguez and newsense: I'm going to respond to both of you in one comment since you both are referring to a similar point. (And you're anticipating my next article on this topic!) First, I'm attempting here to only test the hypothesis that some batters are consistently better with RISP than without, ignoring the context. I'm saying probably no.

But you both raise the valid point that there are differences to batting with RISP than without--the infielders have to position themselves to hold runners on, the pitcher has to pitch out of the stretch, and the batter's facing a pitcher who's allowed RISP in the first place. Having first base open may change strategies as well. I'm working on putting all of this together. Stay tuned, and thanks for reading my piece.
Reply to mainsr
rolando
It sounds like you're counting some players multiple times. This really isn't kosher, as the "trials" (players in this case) should be independent. I don't think that it would change the results much, but I suggest counting each player only once (take either the first 6 years that qualify or the last 6 or some other consistent way of choosing the years).
Reply to rolando
mainsr
Fair point, Rolando. I wrestled with the issue of how to balance a player who had only one six-year streak with guys like Ortiz and Jeter. I considered weighting the guys with more longevity, but that wouldn't be much different from what I did, i.e. I'd effectively be counting the same guys multiple times. I could, as you suggest, select each player just once, but then there's the problem of selecting the streak. A lot of long-tenured players kind of sucked at the beginning or end of their career, or both, but selecting their six best mid-career streak I isn't right either. I think the way I did it was the best compromise, but to your point, it's a compromise.
Reply to mainsr