By now, it's been well established that the strike zone (as called, of course, not as defined) has expanded dramatically in the past few years. It's further been established that this increase has principally come from more low pitches being called strikes. It's also been suggested that this expanded zone has been at least in part responsible for the drop in overall scoring seen in the same time frame, though the uptick in runs per game at the end of last year (which has continued this year) at least partially contradicts this. It seems obviously worthwhile, then, to try to examine what sort of effect the new zone is having on the behavior of batters—and especially their swing rates.

To do this, I want to create something analogous to the strike zone that instead looks at swing behavior. By looking at whether the "swing zone" has expanded as well, I might be able to see if and how batters are reacting to the new strike zone reality.

To look at this "swing zone", I'll be using a method that's similar but not identical to the way Jon Roegele has defined strike zone area in his work looking at strike zone expansion in the PITCHf/x era. Jon divided the plane of the plate into one-inch squares and used a strict threshold of taken pitches being called strikes in that box to determine whether it should be included as part of the zone. I use the same grid system, but rather than a threshold, I'll be using the frequency of swings on all pitches in each box and summing them over all boxes to establish the total size of the zone in square inches. I'll also use this general method to establish strike zone size when necessary. All data shown are from combined regular season and playoff games except if otherwise specified.

First, let's take the general case—that is, without accounting for batter handedness, count, or anything at all.

Here, I find that for the first four years, the two figures track each other very, very closely, after which swing zone falls behind the growth pace of the strike zone, before possibly overcorrecting last year. This isn’t a surprising result; it makes complete sense (at least to me) that batters would either consciously or subconsciously realize that the strike zone is getting bigger, and adjust to that. 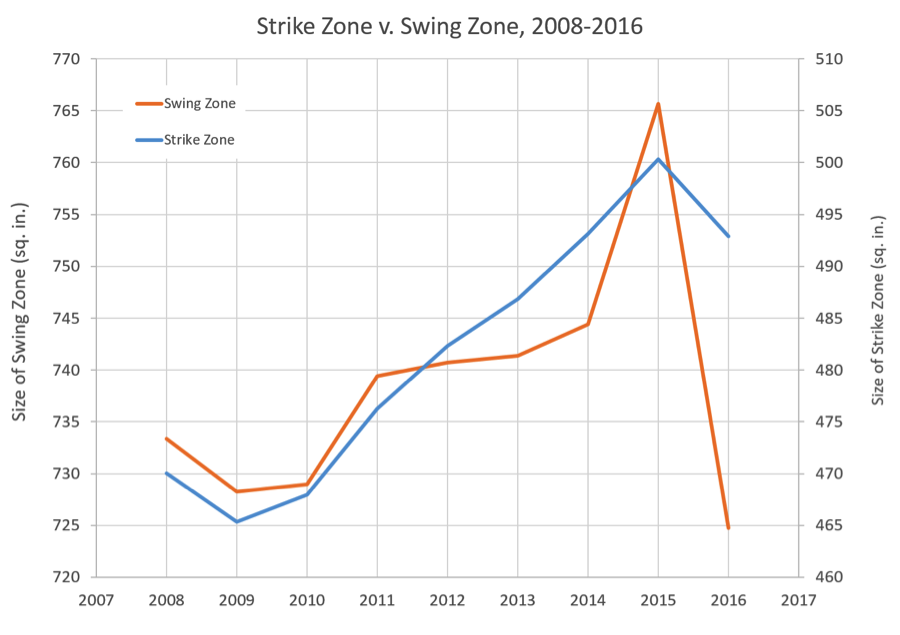 With the understanding that the strike zone has a different shape for right-handed and left-handed batters, I split the sample by batter handedness to see if the same was true for swing zone. I found that there was, in fact, a difference both in the size of the swing zone for each side of the plate as well as a difference in how batter behavior tracked with strike zone changes. Generally, the size of the strike zone changes by the same amount for each type of batter, with RHBs facing a slightly larger effective zone than LHBs (at least by my way of figuring it). However, batters in the two splits have differed dramatically in their reaction to the change as measured by swing zone. Right-handed batters showed the same slow-to-react pattern followed by an overcorrection seen in the combined-split data I first showed, but extended over the entire time period; lefties proved harder to analyze, with no clear or distinct trend in the data. 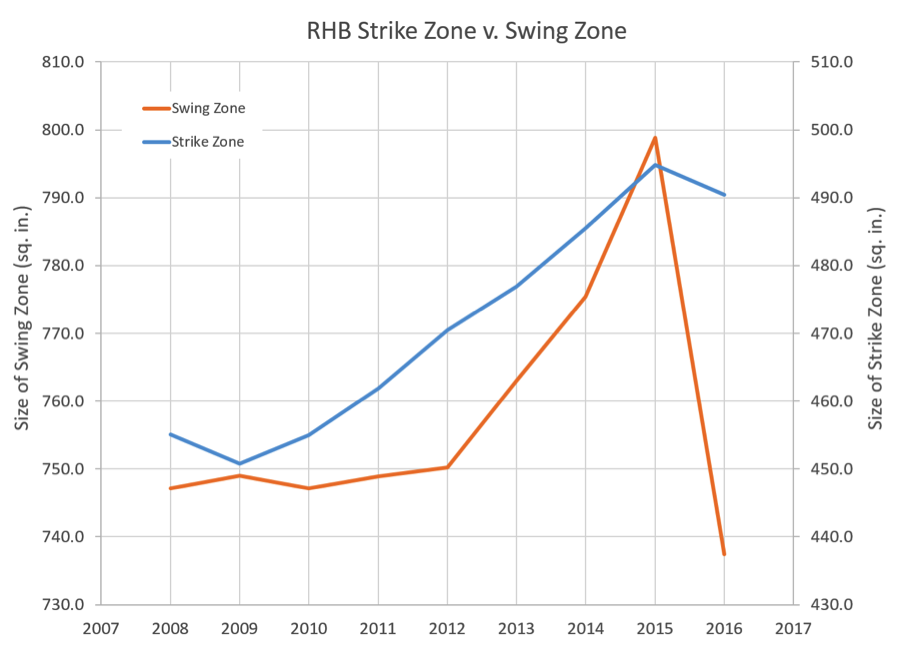 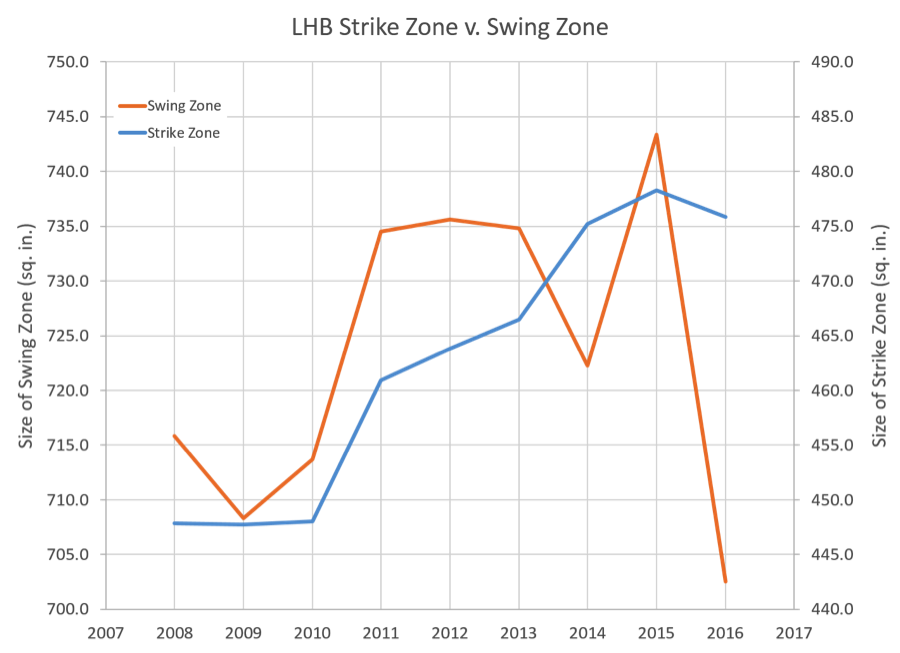 I further found evidence of a change in approach by splitting the sample based on the number of strikes in the count. I found that the upward trend increase in swing zone size came entirely from pitches in zero- or one-strike counts. I think this can be rationalized if you look at it from a global-versus-local-changes sort of perspective. The data show a huge—huge!—change in swing zone size between the three strike-count groups; across all years, each additional strike adds about 350 square inches, and the swing zone-to-strike zone ratio goes from about 0.8 when there are no strikes to about 2.6 when there are two strikes. The number of strikes in the count is of course by far the dominant factor in determining swing zone size. That’s the local change: the number of strikes. The global change—adjustment to a larger average strike zone—disappears, or at least gets entirely swamped, by the local adjustments a batter has to make. It’s still maybe detectable, though, in circumstances where batters aren’t absolutely maximizing the number of pitches they’re willing to swing at. Strike zone size has increased in roughly the same pattern regardless of the number of strikes, but swing zone size is only seen increasing with fewer than two strikes because by the time there are two strikes, the batter is already swinging at anything close—a strike zone that’s bigger than it was last year by five square inches just isn’t significant enough to make a difference.

Since the strike zone expansion has come almost entirely from the bottom of the zone, I tried to determine if the swing zone expansion would show a similar pattern. To do that, I compared the swing zone sizes from 2008 and 2015 separately for both the area below and the area above the bottom of the average rulebook strike zone, which is about 19 inches off the ground, excluding pitches that happened with two strikes. In fact, all the expansion in the swing zone does come from this low zone: It increased by 29 square inches from 2008 to 2015, while swing zone size above 19 inches showed basically no change. The heatmap-style plots show swing frequency in the 1” x 1” squares on a red-to-green color scale, and the dark line is at the 19-inch mark. The increase below that line from 2008 to 2015 is clearly visible. 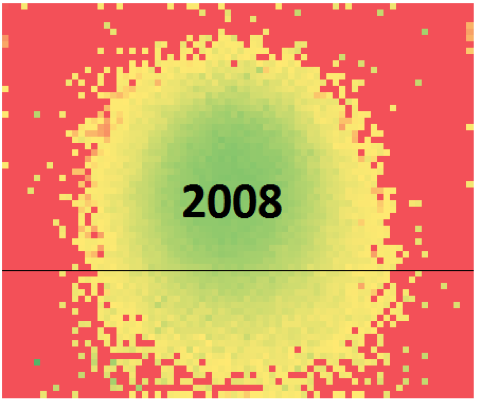 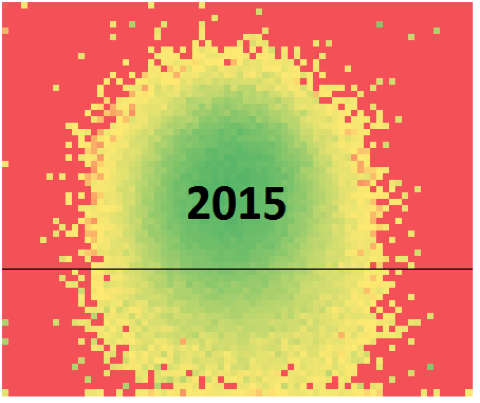 Lastly, I want to touch on the extreme drop in swing zone size seen for 2016 in every graph and chart above. Taken at face value with no further analysis, it ruins… just about every point I made above, I think. It resets the size of the swing zone back to where it was in 2008, or maybe even lower. That was a fairly unexpected result, so I investigated it more by splitting the sample by month of the season (lumping March in with April), to see if the reason for it is just that it’s only the first week of May, and both zone sizes are always down early in the year.

I found that that was indeed the case. Although strike zone size stays reasonably consistent month-to-month, swing zone size increases on average by about 40 square inches over the course of the year. Because of this, I don’t think it’s reasonable to draw any conclusions from the 2016 data. 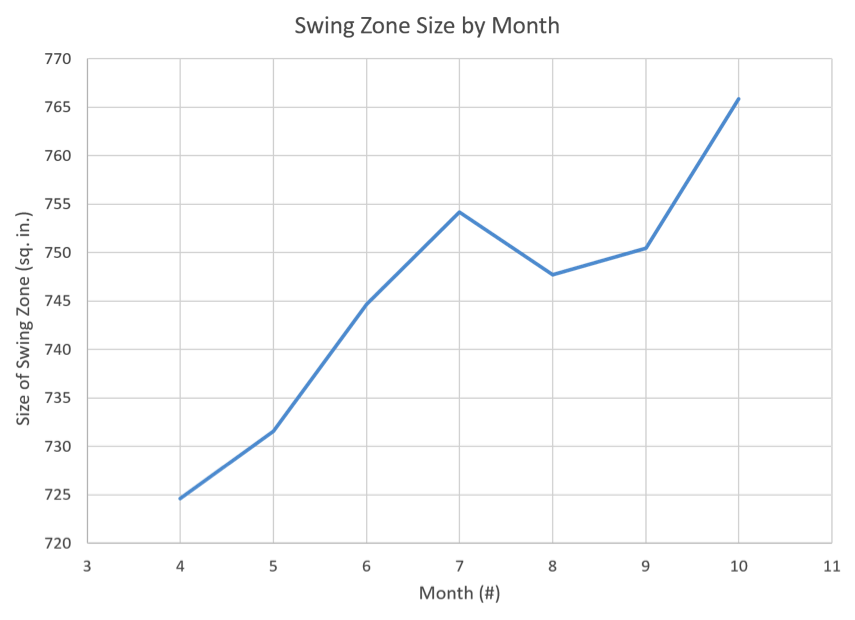 There are certainly further questions that could be asked here, ranging all the way from “is this method valid?” to “can outcomes on low-pitch swings explain the recent changes in run scoring trends?” However, those will have to be saved for either another researcher, or at least another article.

You need to be logged in to comment. Login or Subscribe
pizzacutter
This might be the smartest thing I've read all year.
Reply to pizzacutter
russell
Nice work!
Reply to russell
sunsshagger
Maybe I missed something, but please let us know what swing frequency (or frequencies) you used in your analysis to include a particular one-inch square in the Swing Zone, and what minimum percentage of called strikes does a square require to be in the strike zone.

My research group at Johns Hopkins has done some tangential work and decided to use 95% for both, but sometimes I think that's too high. The choice of threshold(s) can lead one in very different directions.

I would appreciate any comments.


Reply to sunsshagger
JohnChoiniere
There is no minimum requirement; rather, the frequencies for all 1" squares -- well, not all, but covering five feet vertically and six feet horizontally -- were summed to get the total zone size (for both strike and swing zones). So, if there were a square that had 15 swings out of 30 total pitches, that square contributed a half-inch to the swing zone size.

This isn't perfect methodology; by this method, a square where one of two pitches were swung at contributes exactly as much to the total size as a square where 300 out of 600 were swung at. I think if I were to re-analyze the data, and for any further work I might do in this area, I'd set a minimum threshold for the zone to be included. Maybe 5 pitches, but that's just off the top of my head. Regardless, this would change the absolute numbers, but I don't believe it would change any of the comparisons to any significant degree.

My results are comparable to his, but obviously not identical due to the different methods used.
Reply to JohnChoiniere