The sport wasn’t always this way, by which you probably think I’m going to complain that pitchers don’t go nine anymore, relievers are just disposable widgets, and every tense spot these days is interrupted by commercials for a new gadget that I'll never figure out. Sort of, but sort of the opposite: Time was, Kalish would have been pinch-hit for, by a right-hander off the bench. But we are seeing the extinction of the NoPAPH*.

NoPAPH: No plate appearance pinch-hitter. The guy who is called upon to pinch-hit, inspires a pitching change, and is then immediately removed for a new pinch-hitter. Baseball’s MacGuffin. The only job in the sport you could do.

The NoPAPH has always existed, but, like a lot of small things we take for granted today, it was really born in the 1960s, when the league went from a dozen or two such appearances per year to 75 or so. In 1970, there were 122, as 28 major-league hitters NoPAPH’d at least twice that season. The Detroit Tigers manager Mayo Smith really relished this tactic, which one might call a Pinch-Hitter Sandwich; he mustered a league-leading 13 NoPAPHs that year. The strategy fell slightly out of favor after the DH was implemented in the AL—there were only 63 in the first year of the DH, and only 24 spread among the AL that year—and it would take a couple decades for the rates to catch up to Mayo, but they did. By the 1990s, 100 or more NoPAPHs were common. In the first year of that decade, there were 149. Dave Hansen retired with a record 63 NoPAPH appearances, which is the record Dave Hansen is without a doubt most qualified to hold. (Active leader David Ross is way down at six of these.) It’s also the only offensive record that I know of that comes with, by definition, a 0.0 Win Probability Added.

Last year, there were 57. The rise and fall of the NoPAPH is, like most politics, no harder to explain than demographics. As pitcher specialization took hold, more pitchers were being used in each game, 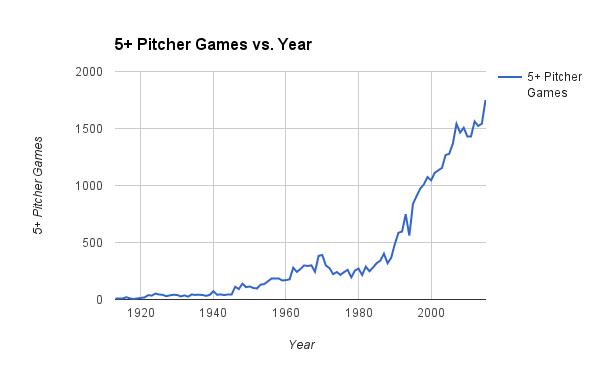 tactics demanded more players, yet roster sizes stayed the same (for the most part), turning available pitchers into a relatively scarce resource. In the 1990s, you'd see a manager pinch-hit specifically to force the opposing manager to use a reliever, thus ensuring that reliever would face some number of batters and/or thus making that reliever unavailable for later in the game. If a team only had one left-handed reliever, burning him meant playing the rest of the game at a tactical disadvantage. The pinch-hitting manager, meanwhile, could turn around and NoPAPH his guy out of there.

But managers don't like scarce resources, so they responded to this by carrying more pitchers, and with roster sizes again staying the same, something had to go—reserve hitters. With seven- or eight-man bullpens but three- or four-man benches, it’s now the pinch-hitters that are scarce. Using two of them for a single at-bat now leaves a manager with, potentially, nothing but a backup catcher on the bench. Managers, again, don't like scarce resources, so they responded by not using their pinch-hitters so cavalierly.

In other words, managers identified a strategy, which led to the rise of the NoPAPH; and they liked it so much that the NoPAPH couldn’t even handle it anymore. You could almost imagine this scenario playing out:

Seventh inning, medium-leverage (say, two outs, none on, two-run game) situation with a righty on the mound, righty coming up to bat. Lefty and righty warming in the ‘pen. Manager on offense doesn’t send out a pinch-hitter, knowing that the lefty reliever would just come in to neutralize the matchup. Manager on defense, though, goes to the righty—replaces a righty with another righty. Manager on offense, knowing that a new pitcher must face the next batter, knowing he's got at least a guaranteed platoon advantage for a pinch-hitter in the late innings, sends up his lefty-hitting pinch-hitter.

Why not? Relievers are cheap. Pinch-hitters are rare. By enticing his opponent to burn the left-handed pinch-hitter in a medium-leverage spot, the manager on defense has quite possibly depleted the opposing bench of its only viable lefty bench bat, and for the rest of the game righties can pitch with platoon impunity. (Implatoonity.) The manager on offense might recognize this loss, but accept the deal anyway, knowing that in a world with three lefties in many ‘pens his batter will never get another chance at a friendly matchup.

A few weeks ago, Joe Sheehan had a tremendous argument in his newsletter about what has been lost in the 13-pitcher era. Among his points was that we’ve lost something exciting about the game when teams are sending up terrible hitters in the biggest moments just because there’s no such thing as a good pinch-hitter anymore. It’s hard to know exactly how much worse pinch-hitters are these days. (Leaguewide pinch-hitter stats aren’t very helpful, because teams that carry seven pinch-hitters might get more aggregate value out of those seven than a team that carries three or four, but only by digging deeper into the pool of barely qualified MLB hitters, and thus diluting the pinch-hitting slash stats.) But Joe’s writing inspired me to look at the NoPAPH as a proxy: If we can’t say pinch-hitters are worse than they used to be, we can at least say that they’re less platoon advantaged than they ever were—especially right-handed pinch-hitters.

Since the late 1980s (and probably before that), we’ve seen lefty pinch-hitters—hitters who were specifically brought into the game for this one, single at-bat, and who can theoretically be saved for a friendly matchup—face more and more lefty pitchers. Not by much, as you can see,

For righties, though, pinch-hitting is a completely different burden than it used to be:

There are more important things in baseball than this, obviously. I’m not sure we should care about it at all, except to notice it. Baseball changes, and when it does, things that we used to barely even acknowledge just… disappear. Sometimes these are things we saw in every game, or once a year, things that had names or things that just existed. M&M baseball used to be part of my life, and now it's not. Good baseball movies used to come out, and now they don't. Sometimes the sport legislates things into artifacts on purpose—the neighborhood play, the fake-to-third pickoff move. Sometimes they disappear because of official actions, but only by accident—the often-invoked-if-totally-unofficial “tie goes to the runner” is now, in the age of reply, completely extinct. (Tie goes to whatever the call on the field was, now.) If Omar Vizquel's justification for sliding into first base—that it makes it harder for the umpire to make a call—is honest, we might expect to see that dumb ol' thing disappear in the replay era, too.

And sometimes they disappear by accident. The NoPAPH was, if you’re my age, part of baseball when you were growing up. Now, it’s barely hanging on, and barring rule changes or strategy changes it’ll get rarer and rarer. (Last year was the second-lowest NoPAPH year since the 1960s, and this year is on pace to come in lower still.) It didn’t have a name until it was already endangered, but, then, it wasn’t very important to me until it was already endangered. Whatever, I guess.

You need to be logged in to comment. Login or Subscribe
rocket
"Implatoonity" - fantastic
Reply to rocket
LlarryA
Look that up in your Funk & Wagnalls!
Reply to LlarryA
scylla
I can't stop reading the Mayo Smith sentence, and it gets funnier every time.
Reply to scylla
hotstatrat
Nonetheless, I'd like to know what the comparitive batting stats are for pinch hitters in the past and now: OPS, OPS+ (or their TAV equivelents if you insist), and PA. We could decide how meaningful it is. Sure, you had more players available for pinch hitting in earlier decades digging deeper into the talent pool, but you had more players who specialized in pinch hitting. Now, you have to have a bench with less specialized talents. If anything, I'd bet that overcompensates for the deeper reach.

Reply to hotstatrat
lyricalkiller
Here you go!
http://bbref.com/pi/shareit/c2p9n
Reply to lyricalkiller
hotstatrat
Thanks. I just noticed your reply. To my eyes, it doesn't show any significant overcompensation, but does back up my guess that it makes up for it. Everything looks pretty much as a normal flucuation close a steady level hitting below league average. Yes, this year is showing something at the very high end of that, but in a smaller sample size. Let's look again at the end of the year.

The one significant dip relative to the league was in 1969 - the biggest expansion year. That could be explained by a lack of bench depth that season.
Reply to hotstatrat
hotstatrat
Wow. Mind boggling. I took the trouble to write a little analysis of some data that Sam prepared when I noticed it 6 weeks afterwards - and within hours someone took the trouble to ding me - with no explanation, of course.
Reply to hotstatrat