When a player throws 20 consecutive scoreless innings at the major-league level, as Aaron Nola just has, he makes an implicit demand upon your time which, rendered explicitly, reads like this: Sit up and notice me! When that same player has Nola’s pedigree—drafted seventh overall by the Phillies in 2014; ranked in the Top 100 prospects in the game by this very publication that same year—but has not yet achieved consistent success in the majors, the demand is read at twice the volume.

Let’s start with the facts: Nola is striking out more batters than he did last year, on a rate basis, while at the same time walking fewer, generating more groundballs than he did last year, and allowing fewer flyballs to leave the ballpark. That last one is (probably) not really within his control, but let’s leave it in there to illustrate the general point, which is this: There’s no one thing that’s going right for Nola this year. He’s just gotten better across the board. It happens sometimes.

And that suggests that there’s little point trying to isolate just one thing he’s doing differently this year than last. He’s doing a lot of things differently. That’s how development happens. Here are a few things that probably matter.

And what of his other three pitches? Well, his usage pattern is basically the same as last year (he starts with mostly four-seamers, then increasingly goes to his curve and sinker as the game progresses) but the ratio of the pitches has changed. His curve and sinker now account for 66 percent of all pitches he throws, up from 47 percent last year. That, according to his catcher Cameron Rupp, has made the difference. “You can get them out the first time around using that curveball and fastball,” Rupp said after Nola blanked St. Louis for seven innings earlier this week. “The second time around and the third time around, you have to start making adjustments and throwing something different. The changeup is that pitch. It’s been outstanding.”

No. 2: He’s Stopped Leaving Pitches Over the Plate to Lefties.
This one’s an easy one, at least to write out: Nola has worked out how to hit his spots more effectively. Last year, he took a fairly standard approach against opposing hitters: down and away to lefties, and even further down and away against righties. Here are the charts: 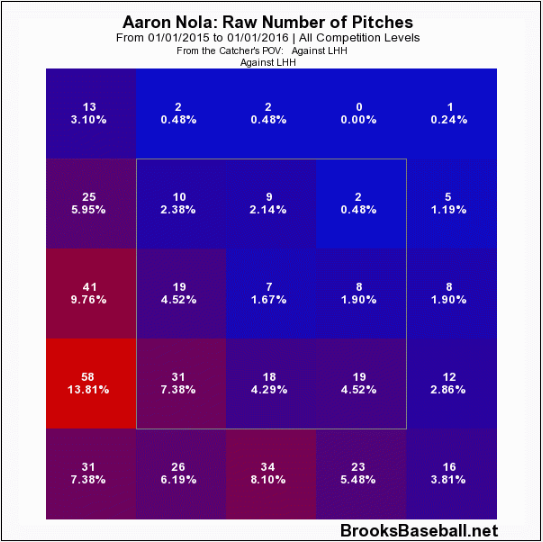 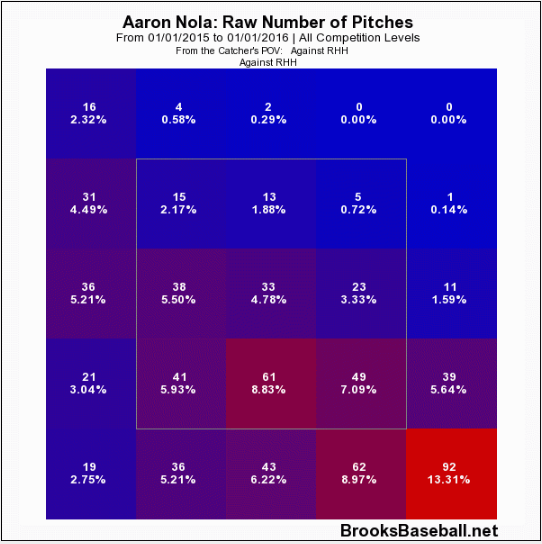 This year, the approach has stayed the same, but he’s refined his execution: 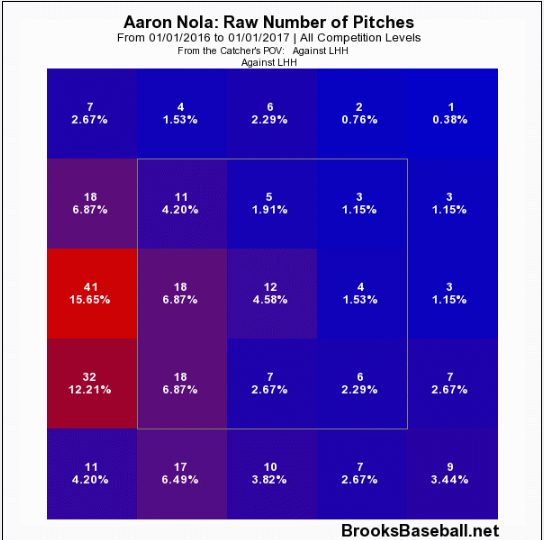 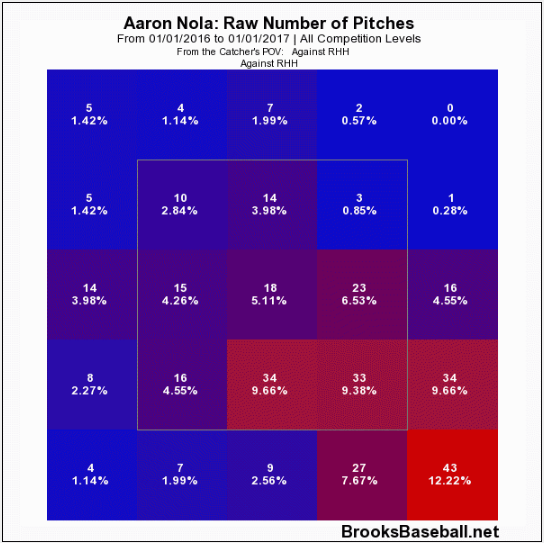 Particularly against lefties, he’s abandoned the middle-lower part of the zone, but the trend is there against righties too. In short, he’s gotten better at keeping the ball away from hitters, which could be leading to the higher groundball rates he’s seen in the early going so far this year.

No. 3: He’s Adjusted His Arm Slot.
This is the last one, and it’s another one that’s best explained by pretty pictures. You’re about to see two charts. The first one shows Nola’s horizontal release point. The second shows his vertical release point. They both display data points for all four of his pitches, and for both his big-league seasons so far (this year and last). Go ahead, take a look at them. We’ll meet in a minute to regroup. 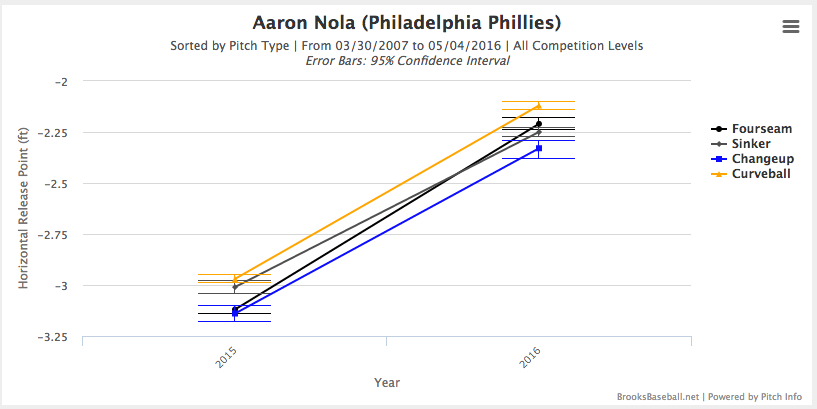 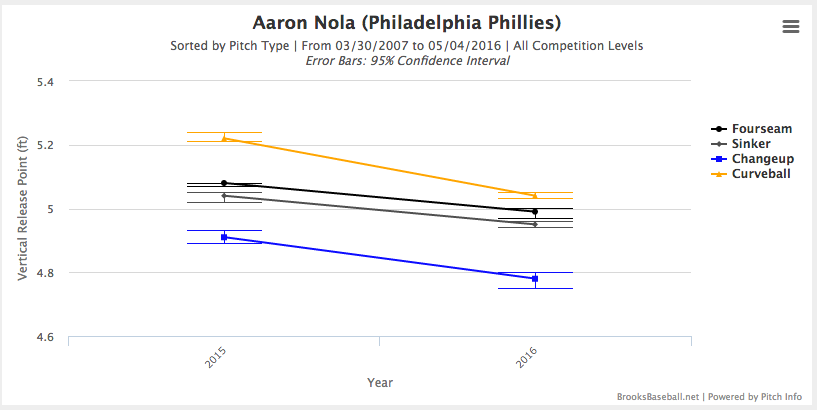 So, uh, did you see anything? I sure did. It’s not a random fluke, either—Nola’s been relatively consistent with his release point (across both dimensions) game to game. This appears to be an actual change he’s tried to make. Here’s what it looks like. 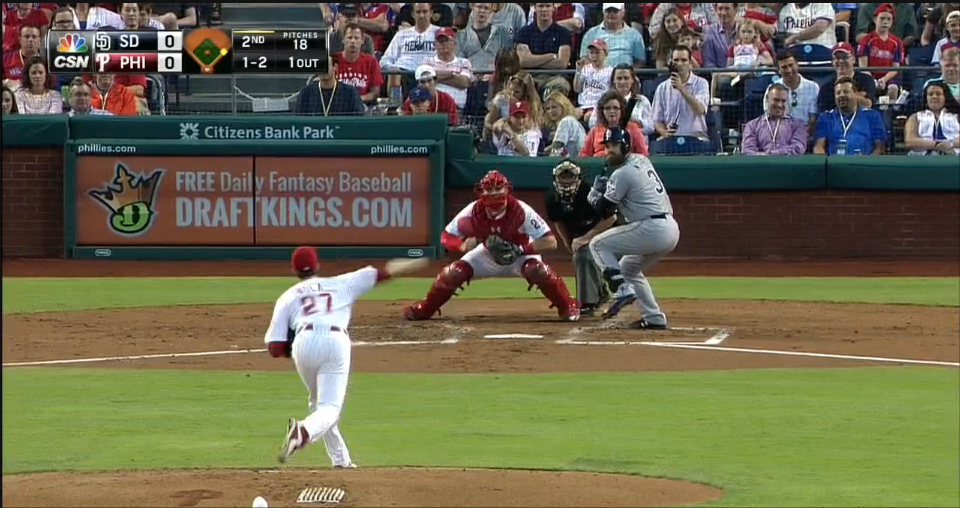 That’s The Man Himself, throwing against the Padres last year. Here he is this year, against the Nationals. 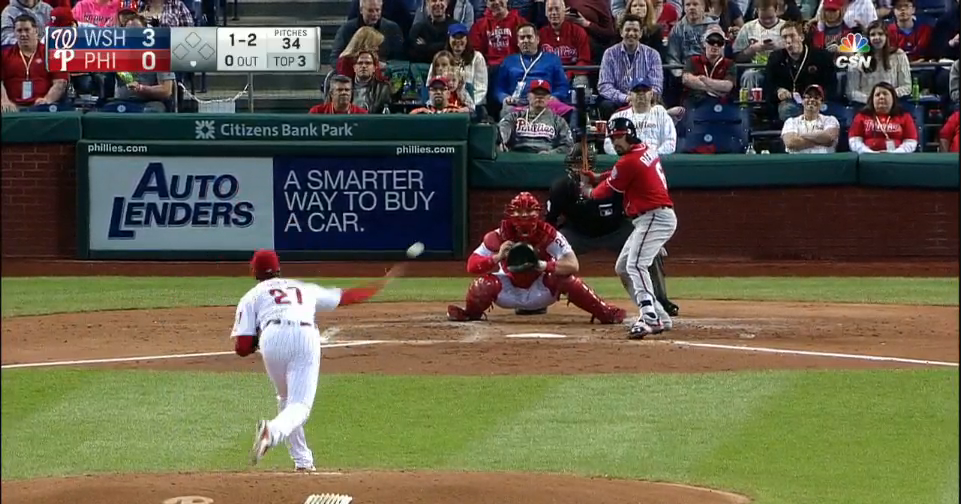 Quite stark, when you look at it that way. Instead of releasing the pitch with his arm stretched essentially straight, he’s now snapping his pitches over his elbow, which (I’m guessing) gives his pitches less arm-side run than they had before, and drives them into the zone with a bit more control than he had previously (hence point no. 2, above). Nothing appears to have changed too substantially with Nola’s velocity, so I’m guessing this change has played out more in terms of deception (less time for the hitter to see the ball?) and in command than anything else.

To recapitulate: When a pitcher (or, for that matter, a player) gets dramatically better early in his career, there’s usually a lot of things that go into it. You didn’t suddenly learn how to be an adult all in one go. You learned what FICA was one day, what property insurance was another, and how to say “I’m sorry” on a third. Nola’s equivalents this year, it seems, are a combination of a changed arm slot, improved command, and better sequencing of his pitches. He won’t break Orel Hershiser’s record (probably). But it does appear that he’s arrived on the scene for real this time.