Quality starts of all things have been in the news, lately. Here’s why:

Of course, this sort of thing invariably leads to a discussion about quality starts. You know how these go. “Garbage stat.” “They’re mundane.” “What’s quality about it, they’re nothing special.” “Hey, three runs in six innings, that’s a 4.50 ERA, what’s so good about that?” "Didn't Arrieta's streak snap Thursday? Can't we go back to forgetting about quality starts now?"

Admittedly, quality starts have the same weakness of most game-specific baseball statistics: The sport doesn’t lend itself to one-game narrative numbers. When Anthony Davis scored 59 points against the Pistons this season, it defined the game. But in baseball, dominant performances on paper for one game don’t necessarily mean dominance on the diamond—even, necessarily in that one game. Five no-hitters have come in games the pitchers’ team lost. Batters have hit for the cycle in losing efforts 36 times. Last June 13th, J.D. Martinez went two-for-four with a double, homer, and walk against the Indians, which sounds like a good performance, but he grounded into a double play with one out and runners on the corners in the last of the ninth with the Tigers down by a run. As a result, his WPA for the game was -0.177, a figure topped by 235 players who went 0-for-5 last year. In baseball, game-specific datapoints, like quality starts, are of limited value.

That being said, how true are the complaints about quality starts? Let’s take them one at a time.

Quality Starts are Mundane.
This chart graphs the percentage of all pitcher starts that were quality starts during the 1998-2015 30-team era. The complaint that they’re common has validity. Over those 18 years, just under half of all starts—49.5 percent–have been ones in which the starting pitcher has thrown at least six innings and allowed three earned runs or fewer. Quality starts have accounted for over half of all starts for the past six years. 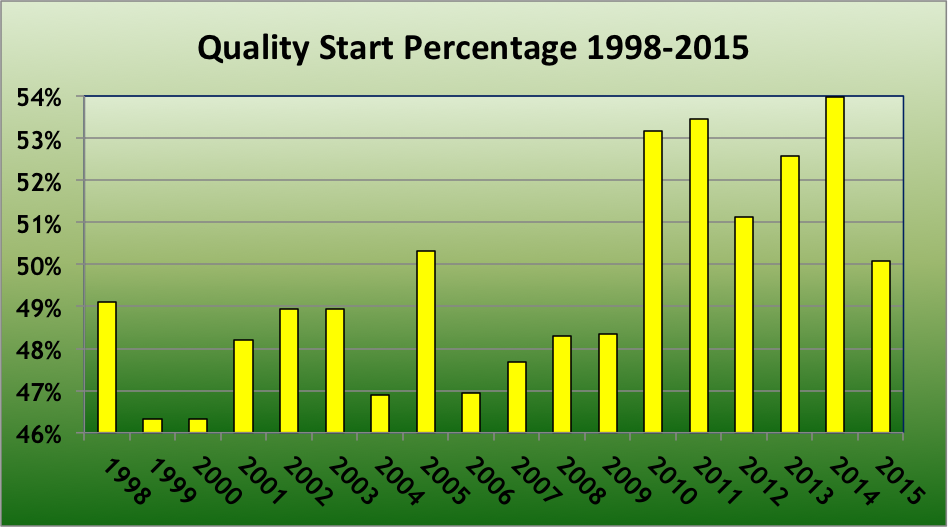 The rise of quality starts, though, is pretty easy to explain. In the chart below, I added runs per game, scaled on the right side of the graph, to the display. 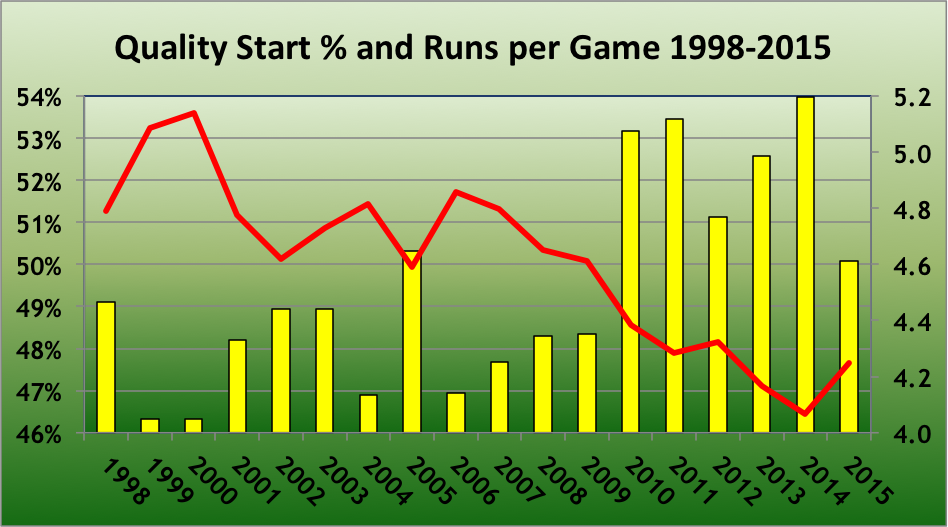 Of course, this doesn’t negate the premise that quality starts are pretty common. Does that make them useless, though?

Quality Starts Aren’t Special.
Let’s look at that two ways. First, do quality starts win games? Here are won-lost percentages for teams and pitchers (yeah, I know, pitcher wins, but play along with me) in quality starts: 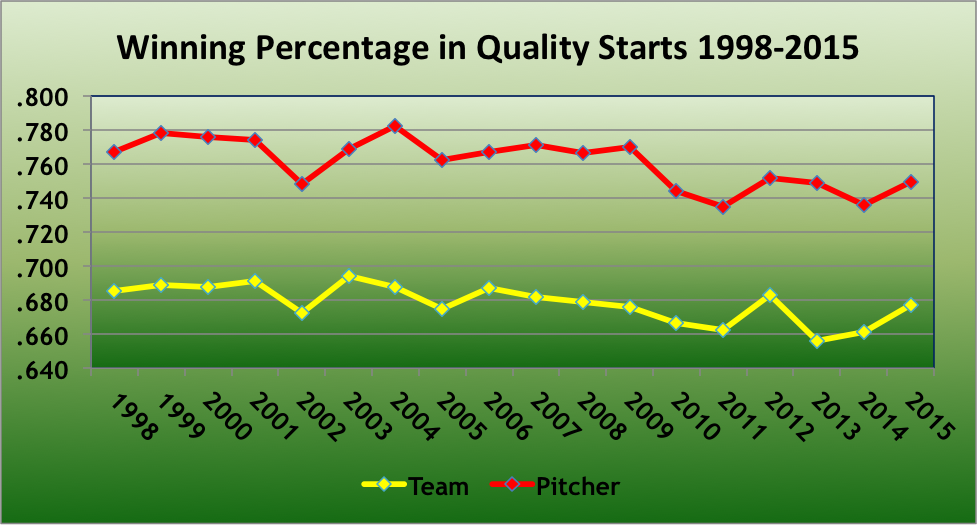 Since 1998, pitchers’ winning percentage in quality starts has averaged .760. In those years, there has been an average of only 3.2 ERA qualifers per year with a winning percentage in excess of that .760 figure. Last year, they were Zack Greinke, 19-3; Jake Arrieta, 22-6; and David Price, 18-5. They were all pretty good.

More importantly, teams have won 68 percent of games in which the starting pitcher has had a quality start. That equates to a 110-win pace over 162 games. Put another way, a pitcher throwing a quality start is putting his team into a position to win at about the same pace as the 1961 Yankees. 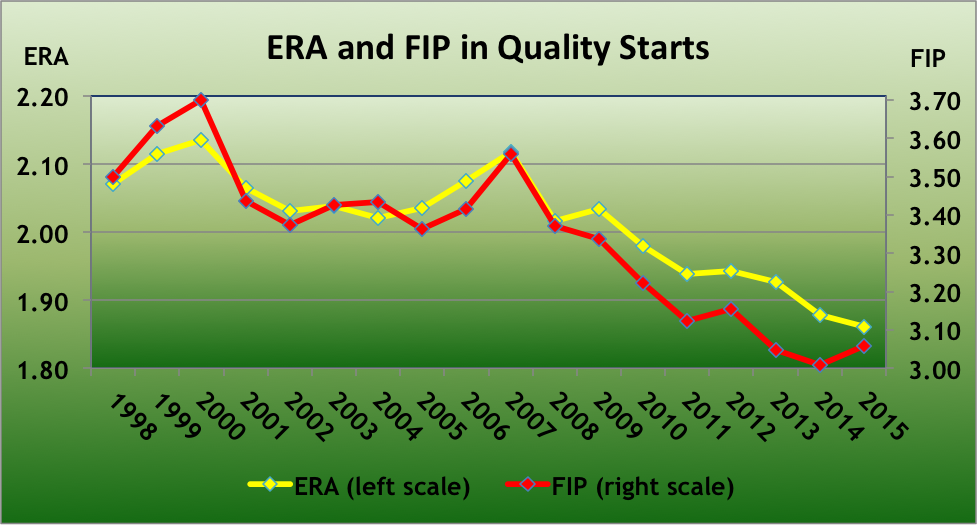 The fact that ERAs in quality starts are well below FIPs isn’t a surprise. Low ERAs are almost always aided by sequencing and BABIP luck. Last year, of the 10 qualifiers with the lowest ERA, all but Clayton Kershaw had an ERA lower than FIP. Another way to look at this is to compare ERA and FIP for starters in quality starts to starters overall.

In each of the past 18 years, pitchers credited with quality starts have posted ERAs less than half of the league average for starters, and FIPs that are 21-26 percent lower than average. That’s really good. The only qualified starters last year with season-long ERAs lower than the quality-start average of 1.86 were Greinke (1.66) and Arrieta (1.77). There were only 17 qualified starters (out of 77) with FIPs lower than the quality start average of 3.06. Quality starts, on average, are well pitched. 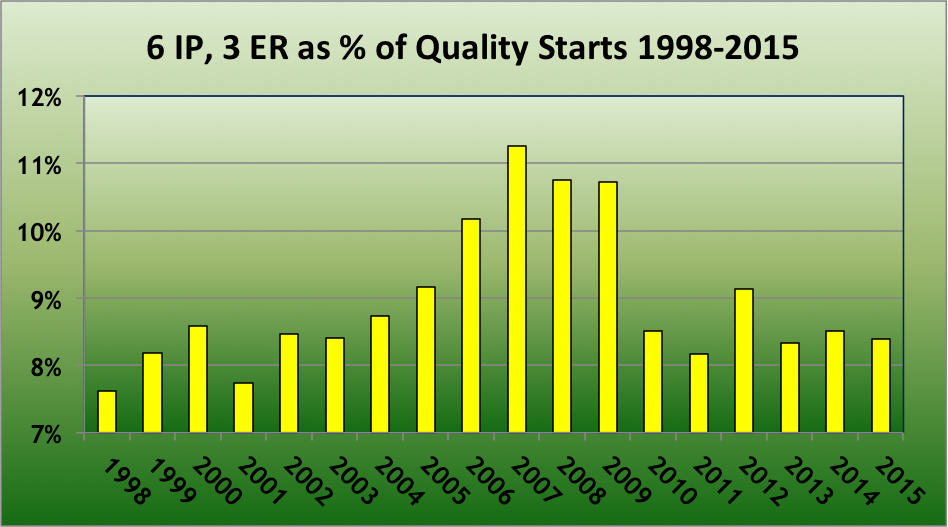 Every year, somewhere between one in nine and one in 13 quality starts involves a pitcher who throws exactly six innings and allows exactly three earned runs. Yes, those aren’t great numbers, and last year teams whose starters threw six innings and allowed three earned runs were 95-109. But that’s focusing on just 8 percent of quality starts, and the very worst of them—the floor has to go somewhere, after all. It gets back to the problem of looking at individual game statistics in baseball. A pitcher who gives up three earned runs in six innings didn’t have a fantastic game. But neither did J.D. Martinez on the day he grounded into that 6-4-3 double play with one out in the ninth and his team trailing by a run, reducing the Tigers’ win expectancy from 45 percent to 0 percent. Last year, teams with a player going 2-for-4 with a homer and a walk, as Martinez did against Cleveland, won 118 games and lost 37. So usually, a performance like that helps a team win. Sometimes achieving a performance baseline in a game just doesn’t pan out. In both the cases of Martinez’s batting line and the quality start, it usually does. Just not always.

There are plenty of ways to evaluate starting pitchers. Some are better than others. The quality start certainly isn’t at the top of the list, but it’s not at the bottom, either. In fact, here’s a table comparing the average pitching line in starts involving the two most prominent single-game measures for starting pitchers last year:

You need to be logged in to comment. Login or Subscribe
ggdowd
It seems that this is all just an argument for changing the definition of the quality start. As you say, the baseline has to go somewhere, but shouldn't it at least go somewhere where pitchers who do the bare-minimum to qualify have at least pitched well? A pitcher who throws a bare-minimum quality start every time out is a below-average pitcher, and his team will lose most of his starts.

The reason pitcher wins is not a good stat is because it doesn't tell you, by itself, very much about how well a pitcher pitched. Quality starts at least decouple a pitcher's performance from his team's offensive performance. I think the quality start would be much improved by shifting the baseline based on start length. For example: 1 run of fewer in at least 5 innings; 2 or fewer in at least six innings; or 3 or fewer in at least 7 innings.
Reply to ggdowd
mainsr
Hey ggdowd, thanks for the thoughtful reply. My concern with a sliding-scale QS is that it'd bee too complicated or too restrictive. I agree, a pitcher who pitches 6 IP, 3 ER each time out is below-average, but that pitcher doesn't really exist--as the numbers show, the typical quality start is well-pitched, just as the game I noted for JD Martinez (2.100 OPS) is typically a good game; it just wasn't in his case. And the 6 IP/3 ER baseline is a pretty small minority. But yeah, I agree with you about why QS > W.

To your proposal: Last year there were 1293 games in which the SP pitched 7 or more innings with 3 or fewer ER. There were 859 with 6.0-6.2 IP, 2 or fewer ER. There were 231 with 5.0-5.2 IP, 1 or fewer ER. That's a total of 2,383. There were 2,434 QS last year. So your proposal yields almost the same number of QSs--not too restrictive--in a more aesthetically appealing format. So I like it! Whether it'd be too complicated for the batting average/RBI/pitcher wins crowd...
Reply to mainsr
LastLivingSouls
My league is having a "come to jesus" discussion about the validity of QS over wins as of this very writing. This will be great required reading for them.
Reply to LastLivingSouls
mainsr
Glad to be timely!
Reply to mainsr
sroney
I am in an ESPN points league, and a few years ago we changed from a Win being worth ten points to a win being 7 and QS being 3. This was primarily to fix the problem that for a relief pitcher, BS+W was more points than a SV, but also to give some points to the pitchers that lost 2-1 and less points to the win that was not a QS.
Reply to sroney
jimmyjames
I have always wondered why 6 IP and 3 ER qualified as a quality start but 8 IP and 4 ER did not.

Reply to jimmyjames
mainsr
I looked up the QS entry in Dickson. It was proposed in December 1985 by Philadelphia Inquirer sportswriter John Lowe. According to Dickson, "By the mid-1980s, relief pitching specialization was escalating and a starting pitcher was considered to have done his job if he pitched six innings and kept his team in the game."
Reply to mainsr