In a cruel twist of fate, the Atlanta Braves’ first hit of the 2016 season was actually a solo home run by Freddie Freeman off of Max Scherzer. Three innings later, Adonis Garcia hit Atlanta’s second home run of the season. The Braves’ next home run wouldn’t come until six days later on April 10th, which is when Drew Stubbs homered off of Adam Wainwright. And 563 at-bats later, Atlanta’s homerless streak finally came to a close, when Freddie Freeman sent a four-seamer from Tommy Layne over the Red Sox’s bullpen in right field.

The home run drought may have ended, but the Braves are still dealing with a serious lack of power (or anything else) right now. The Braves as currently constructed were never going to be near the top of the power numbers in baseball this season, but their current lack of pop is astonishing by any post-1986-Cardinals standard. Going into yesterday’s game against the Red Sox, the Braves were dead last in baseball in slugging percentage (.283), OPS (.583), and ISO (.056). The good news is that they aren’t dead last in TAv—they’re, uh, tied for dead last, at .235.

Atlanta’s incredibly bad offense has been one of the many reasons why this team is currently mired at the bottom of baseball with a 4-17 record. There's also the subpar performance on the mound and in the field, and those two parties came together Wednesday for a moment that summed up the absolute horror show that this month has been for Atlanta. In the bottom of the eighth inning, Dustin Pedroia hit a pop-up on the third-base side, which either A.J. Pierzynski or Daniel Castro should have been able to catch with little issue. Instead, this happened:

That kept Pedroia’s at-bat alive for another pitch, and Pedroia immediately made the Braves pay for the flub:

That was Pedroia’s second homer of the night, and it arguably shouldn’t have even happened. His first homer of the night was a second-inning grand slam off Bud Norris, who couldn’t even make it out of that inning. All of the Braves’ shortcomings were on display in this game, but at least the home run drought is over now. Instead of worrying about a 14-game homerless streak, they can try to snap what is now an eight-game losing streak.

Quick Hits
In Wednesday’s only matinee contest, the Giants and Padres treated us to a bit of a rarity at AT&T Park: a slugfest. The two teams delivered 22 combined runs and 25 combined hits as San Francisco beat San Diego 13-9. Three of San Francisco’s 16 hits came from Brandon Belt, who was a homer shy of baseball’s first cycle of the young season.

Belt’s triple in the bottom of the fourth was the moment that broke the game open for San Francisco. The two-run triple put the Giants up by four, and the Padres wouldn’t get any closer than that for the rest of the afternoon.

The Chicago White Sox continued their blistering start to the 2016 season by picking up their sixth consecutive win, beating Toronto 4-0. While it’s still pretty early to take a look at the Playoff Odds, those numbers are painting a suddenly picture for the Pale Hose, whose adjusted playoff odds (chances of reaching a full playoff series) crossed the 50 percent mark earlier this week, and are now (at 59 percent) better than double the opening day forecast. Jose Quintana held the Blue Jays scoreless for six innings and struck out 10 in the process while only giving up four hits. 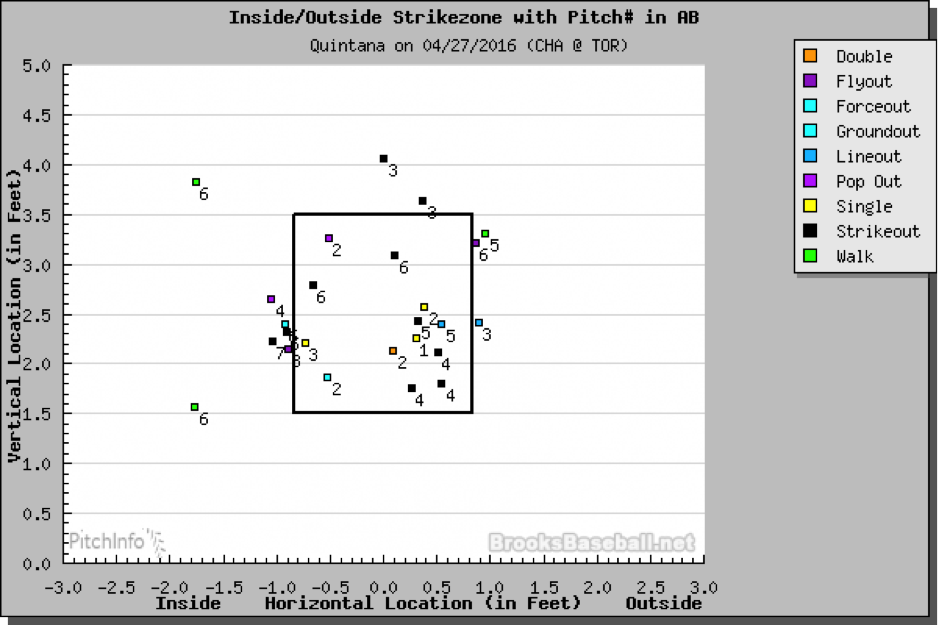 Chicago’s win on Wednesday night followed a familiar trend for them: Keep pace with the other team until the seventh inning, and then pull away from that point forward. Dioner Navarro was the man who came up big for the Sox in the seventh inning this time, as his fifth career triple plated two runs and put the White Sox ahead for good. While being 10 games over .500 in April doesn’t necessarily mean that they’ll be in a similar position in October, it beats showing up at school in your underwear and forgetting there was a test.

Justin Verlander and Sonny Gray were the two starting pitchers for the tilt between the Athletics and Tigers last night, a rematch of one of the great pitching showdowns in recent postseason history. Seasons change and bad days happen, and on Wednesday Gray just flat-out sucked. He ended up having the shortest start of his career and was chased from the game following the second inning after giving up four runs on just 65 pitches. 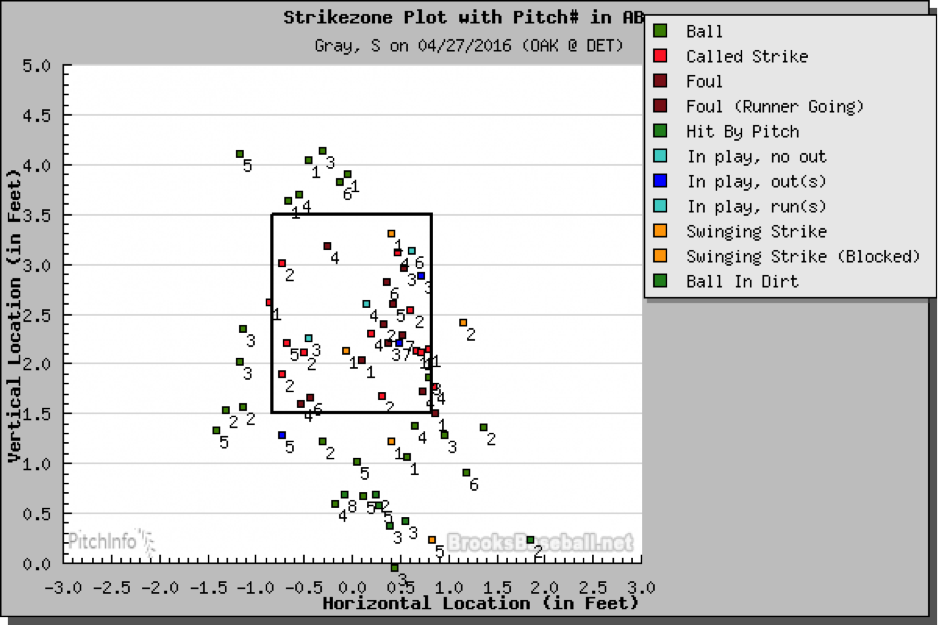 Meanwhile, Verlander managed to limit the A’s to three runs over 6 1/3 innings of work, and by the time he left the game, the Tigers had an 8-3 lead in a game that they’d eventually win 9-4. Victor Martinez’s three-run shot put Detroit out of reach, and his homer also tied him with the Atlanta Braves at four.

Defensive Play of the Day
Steven Souza pulled off an astonishing diving catch to rob Chris Davis of what would have surely been an extra-base gapper.

What to Watch on Thursday
Kenta Maeda will be making the start for the Dodgers on Thursday night, and as we noted earlier this week, Maeda is a must-see engagement right now. Anytime you can invoke memories of Fernandomania, Nomomania, as well as future visions of Uriasmania, that means something special is happening. But if Maeda’s pursuit of mania isn’t enough for you, then seeing Jose Fernandez pitch against the Boys in Blue should be just the juice you need. Fernandez has had decent success against the current crop of Dodgers—Adrian Gonzalez is the only one who has a homer against Jose Fernandez—and he’ll be looking to bounce back from a forgettable four-run outing against the Giants in his last start. Maeda vs. Stanton, Fernandez vs. Seager, You vs. Your Insatiable Desire To Find Something More Interesting On Another Channel: Should be a good matchup.

You need to be logged in to comment. Login or Subscribe
oldbopper
Just how bad are the Braves? Their assault on the 1962 Mets record of 40-120 is going to be fun to observe from afar because it won't be fun to watch from close up.
Reply to oldbopper