The Wednesday Takeaway
One of the shining revelations of the Reds’ current rebuild has been 26-year-old righty Raisel Iglesias. Heading into Wednesday’s game, and going back to last summer’s trade deadline, Iglesias had put up an ERA of 3.15 and a FIP of 3.51, with 9.6 Ks per nine and just 2.4 walks. A bunch of those numbers got even better Wednesday, as he continues to emerge as not just a popular breakout candidate but the most consistent pitcher the Reds have.

Wednesday, Iglesias pitched 6 2/3 innings against the Rockies, allowing two earned runs as he struck out eight while only walking one Colorado batter. (Those first two numbers aren’t as simple as they seem—and we’re going to get back to them.) Iglesias was getting the Rockies to chase his slider all over the place: 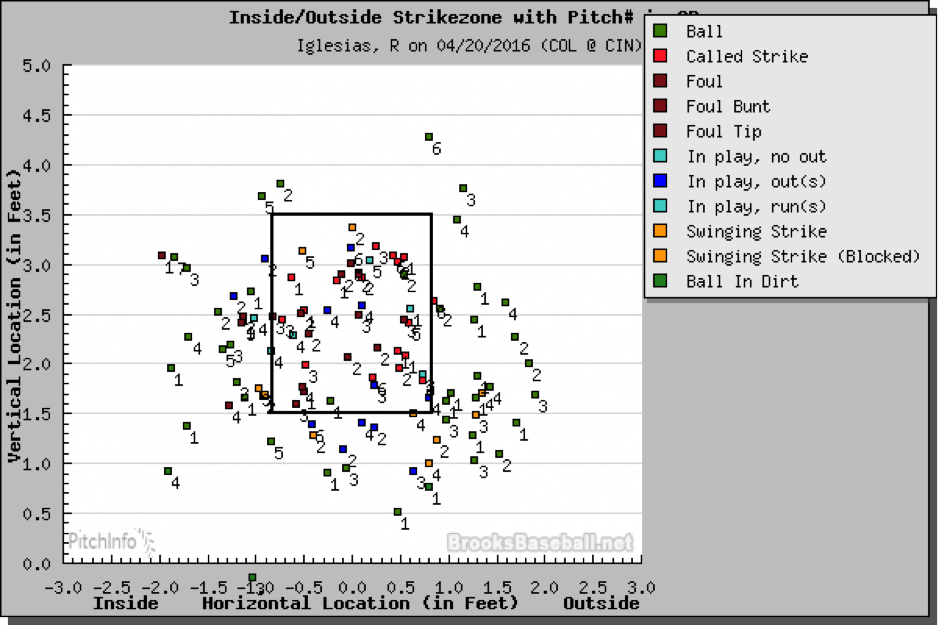 However, it’s what happened immediately after Iglesias’ exit that allowed this game to enter the realm of the bizarre. With two out in the top of the seventh inning, Iglesias gave up an RBI single to Ryan Raburn, as Dustin Garneau scored to tie the game at 3. Iglesias left the game, his precious Win taken from him at the last second. He took his seat in the dugout as a No-Decision’d man, after all that hard work. The book, as the announcers say, was closed on his day.

But before reliever Blake Wood even threw a pitch for the Reds, he was instructed to throw the ball to third base. He did so, Garneau was called out, and Colorado’s game-tying run was taken off the board. Surely Garneau couldn’t have possibly missed the bag on his way to home plate?

The Rockies challenged, but the call stood and Garneau was indeed out. The weirdest part of this entire ordeal was the fact that Wood was given credit for the out, even though he wasn’t on the field for the play in question. By this logic, perhaps Wood should also have been credited with negative-one runs allowed, if the official position is that the play in question took place entirely after Iglesias left the mound. But the official scoring didn’t go that far, though we did end up with a situation in which Wood was given credit for an out before he even threw a pitch, and Iglesias was in line for a win after leaving the game mid-inning during a deadlock. Baseball is a weird, weird game.

That deadlock turned into a tie again, though, because the Reds bullpen delivered its usual poor performance in the eighth inning. A 5-2 lead turned into a 5-5 tie, and it seemed as if extra innings were looming. In the bottom of the ninth, however, the Reds managed to get runners on the corners with one out. That’s when Tucker Barnhart hit a liner to right field to bring this rollercoaster ride to a close.

Quick Hits
Chris Sale started for the White Sox on Wednesday, which meant that it was probably going to end up being a good day on the South Side. It was, though perhaps less so for the White Sox hitters who managed only five hits and two runs. That was plenty, the White Sox ace put on yet another dazzling performance and completely befuddled the Angels during his seven innings pitched. It’s early yet, but it’s clear that Sale is in mid-season form already:

Baltimore’s torrid start continued as they topped Toronto 4-3 in unexpected fashion to pick up their AL East-leading ninth win of the season. The Orioles actually had a 3-0 lead after the first inning, but the Blue Jays steadily chipped away before eventually tying the game in the seventh. In the 10th inning, the Blue Jays had a runner in scoring position with one out, but Ryan Goins grounded into a double play and the scoring threat was nullified.

September 30th, 2015 is currently a significant date for Jordan Zimmermann, because that was the last time he gave up a run in a regular-season game. He’s made three starts so far this season and his ERA is still at a pristine 0.00. His FIP is also at 2.45, which is to say that Zimmermann’s ERA’s inevitable regression could come with a soft landing. He made it 19 scoreless innings in 2016 by blanking the Royals over six innings, adding eight strikeouts and just one walk to his impressive tallies on the season so far. The Tigers gave up two runs in the ninth inning, but for once the Royals’ late rally wasn’t enough.

Defensive Play of the Day
There were a handful of worthy candidates for this glorious honor on Wednesday evening. Both George Springer and Adam Jones made impressive diving grabs that would be here by themselves on most normal nights.

However, Aaron Hicks gets the honors because his 105.5 mph throw to get Danny Valencia out at home was the fastest throw ever recorded by MLB.com’s Statcast. A record-breaking throw has to receive the nod here, right?

What to Watch on Thursday
If you enjoy watching Cy Young winners/candidates pitch, then Thursday’s going to be a great day for you. Jake Arrieta (vs. Reds), Dallas Keuchel (vs. Rangers), Clayton Kershaw (vs. Braves), Gerrit Cole (vs. Padres), David Price (vs. Rays), and Max Scherzer (vs. Marlins) will all be on hills Thursday. Maybe a perfect day would have pitted these six against each other in three amazing matchups, but we’ll settle for the next-best thing: A well-spaced schedule that staggers these six games from 12:10 p.m. ET to 9:10 p.m. ET. Pack snacks.