There’s no point in asking whether there have ever been three pitchers as good as the Yankees’ back-end trio together in one bullpen. It’s not even close; it’s not even close to being close. In 2015, among pitchers with at least 50 innings pitched, Andrew Miller had the lowest cFIP, Dellin Betances the fourth-lowest, and Aroldis Chapman the fifth-lowest. In 2014, the three (in a different order) made up the absolute top of the cFIP leaderboard. If they come anywhere near matching that level of excellence in 2016, they’ll be the best bullpen trio ever, without a close second. The only team in the last 30 years (at least) to put three relievers among the top 15 pitchers in cFIP was the 2012 Rays, who had Jake McGee (third), Joel Peralta (12th), and Fernando Rodney (13th). This Yankee cluster-closer is projected for more WARP than the entire starting rotations of the Angels, Royals, and Braves are projected to add, and about 50 percent more than the average NL bullpen. The only starter projected for more WARP than these three combined is Clayton Kershaw, and he’s also the only pitcher of any kind whom PECOTA thinks will have a better DRA than any of these three in 2016. Keep in mind that PECOTA is a computer system. It’s seen a lot of great relievers come and go, and is generally deeply cynical about their exceptionalism, especially if they have relatively short track records of dominance (like Miller and Betances, each of whom have just a little over two seasons’ worth of stellar relief work affixed to otherwise uninspiring career logs).

Of course, some deride the Yankees offseason because of these very facts. The addition of Chapman was, unless you’re deeply enamored of Starlin Castro, the biggest the team made all winter. Famously (or infamously), the team didn’t sign a free agent to a guaranteed deal all winter. They didn’t stabilize their thin starting rotation. In fact, they used one of their better depth options to acquire Castro. They didn’t use their financial muscle to pursue first-division replacements for any of their (expensive) second-division starters, like Chase Headley or Carlos Beltran, except in that they took on Castro’s salary. They elected to buttress the aging Brett Gardner and Jacoby Ellsbury (each only 32 this year, but 32 is sometimes very old for second-tier outfielders, and even 31 looked old for Ellsbury) only with Aaron Hicks.

Instead of trying to improve at the most important areas of team weakness, GM Brian Cashman decided to make the team’s greatest strength into an even greater one. It’s not hard to see why he went that way.

It’s not really about copying the Royals, of course. Rather, it’s about finding a point in the game at which there’s an opportunity to reliably outpace the league in run prevention. The addition of Chapman gives the Yankees a solid chance, though certainly not any assurance, of stretching their dominance of the late innings one frame forward, to the seventh, and look: it’s the seventh where that kind of extreme performance really starts to separate a team from the rest of the league. Toss in the fact that the middle relief corps let the club down last year, leading to sky-high opponent scoring rates in the sixth and seventh frames, and you can start to see what the Yankees hope will happen in 2016: a savings of perhaps 25 runs in those bridge innings.

That math works, as far as it goes, but that doesn’t mean the Yankees took the right approach, or even that they should deploy their three-headed monster in the traditional, sequential way the Royals did. It might have been more efficient to add a starting pitcher who could reliably pitch into the sixth or seventh inning more often, without giving up so many runs. Failing that, it might have been better to build a bullpen more predicated on depth, with less value concentration but the same overall value. It’s notable that Cashman traded Adam Warren and Justin Wilson (both of whom would comfortably be the fourth-best Yankees reliever, if they were still Yankees) before dealing for Chapman. Unless Joe Girardi can finagle 230 fully healthy, fully effective innings out of his three studs, there’s a good chance the Yankees will give back some of their apparent gains due to the tepidness of the supporting cast.

Maybe there’s a way the team can use the three, though, that changes the number and kind of games the outcomes of which they affect. Last season, the Yankees were 66-3 when leading after six innings. Maybe they could defy the odds and make it a perfect 69-0 in 2016; that would amount to about the three-win change indicated by the runs Chapman’s addition might save. Still, there aren’t a lot of wins the team can reclaim by simply shortening the game (even more than Betances and Miller did by themselves). On the other hand, they were 13-16 when they entered the seventh frame tied. So maybe the secret is to stick with a (rotating) two-man knockout combo for holding leads, and save one in case a relief ace is also needed the next day. Put another way, perhaps having three game-changing arms like these allows New York to use them both more conservatively (it’s okay to give Chapman a rest if he pitched the day before, because Miller, who didn’t, is just as good) and more liberally.

In Baseball Between the Numbers, Keith Woolner showed that the median peak Leverage in all games was 1.66. The game has undergone considerable change in the decade since that research was done, but for the sake of argument, let’s say that that number remains the same, and that the Leverage Index tables printed in that book also hold. (It’s more likely than not that both the median and the situational Leverage values have changed, but have changed roughly parallel to one another.) Woolner argued that it would be imprudent to bring in a relief ace when the Leverage first passed 1.66, because even though the ace would be technically likely not to be needed as badly the next day, there remained the potential for even more important situations later in the same game. The Yankees could afford to worry about that less, since they have not one ace, or even two, but three, so it should be a no-brainer for them to bring in one of the three in a tied game entering the seventh (BBtN listed Leverage: 1.99). In fact, it would sometimes be correct to bring in one of them in a tie entering the sixth (book Leverage: 1.66 exactly), a situation the team faced 33 times in 2015, and from which point they went on to lose 19 times. Whether Girardi will do any of that, of course, is a separate question.

As much as we must make out of Cashman’s decision to build the best back end in any bullpen in which Anthony Recker isn’t the catcher, it’s also possible that this winter was simply about opportunism for the Yankees. Chapman’s trade value was down in the wake of his ugly domestic incident in the fall. Castro had been pushed off his position with the Cubs, and was more of a risk than that team needed to take, going forward. Hicks was similarly crowded out of the Twins’ outfield picture, with Eddie Rosario outplaying him in 2015, the signing of Byung-Ho Park forcing Miguel Sano into the outfield, and Byron Buxton and Max Kepler ready to take their places in the regular lineup, too. The Yankees clearly want to get under the luxury-tax threshold as soon as possible, and that opportunity could come as soon as 2017. Nothing Cashman did this winter came within a mile of encroaching upon that opportunity.

It took a lot of good breaks, in terms of performance relative to pre-season projections, to get the Yankees as far as the Wild Card Game last year. Their third-order winning percentage was strong, so we won’t call their success a fluke, but they had to change PECOTA’s mind. 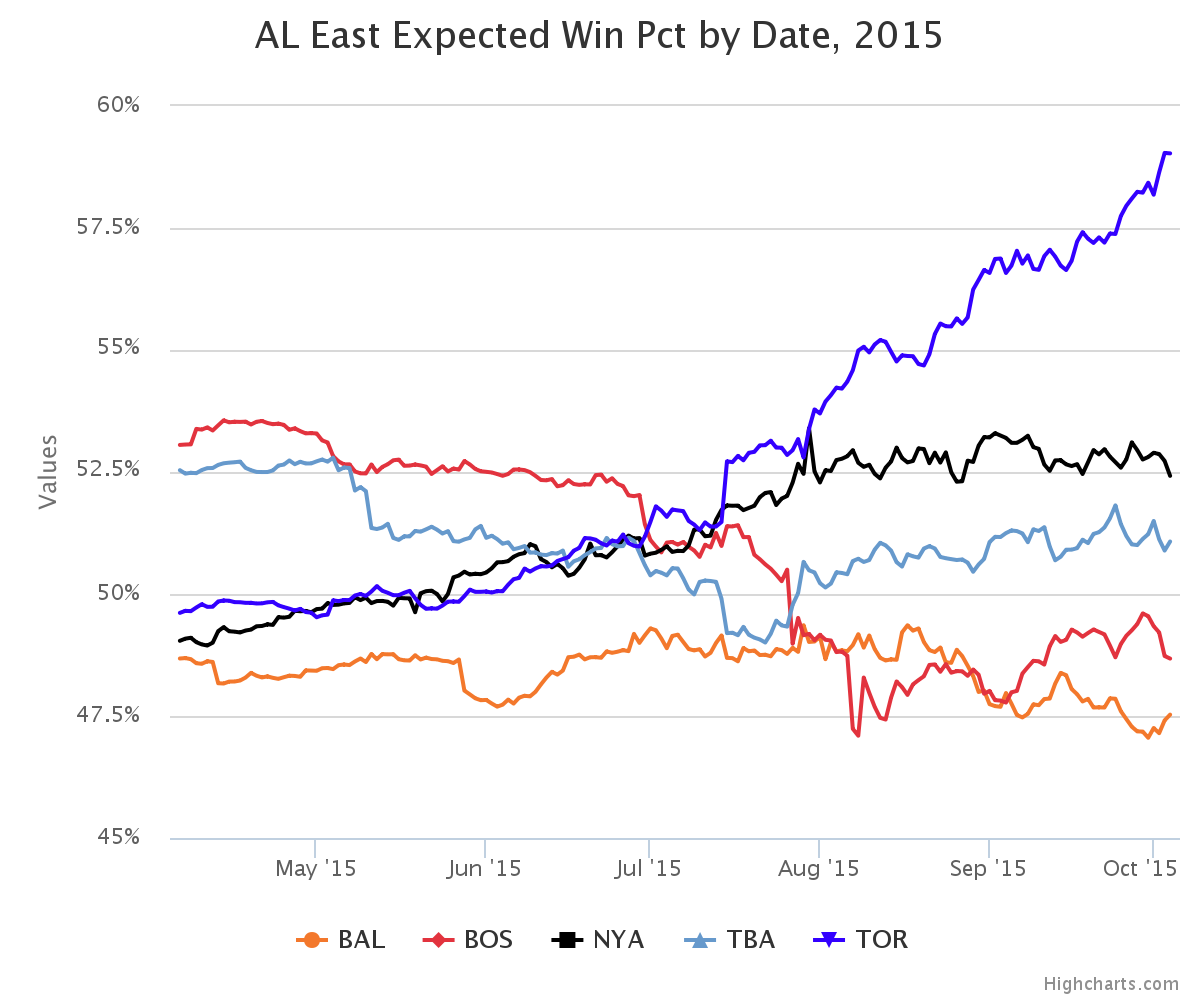 Thrilling and historic as it all is, putting Chapman alongside Miller and Betances was not the best way Cashman could have set up the Yankees to make the playoffs in 2016, if that were the long goal. The best conclusion we can draw is that Cashman simply wanted to keep the team well within range of doing so, while prioritizing the future. In that regard, he probably did well.

You need to be logged in to comment. Login or Subscribe
PeterCollery
Baltimore finished third in the AL East at .500. How can their end-of-season expected winning percentage be last, at .475?
Reply to PeterCollery
matrueblood
Expected W% doesn't concern itself with the record already compiled. It's an estimate of team strength based on PECOTA's projections. The Orioles were running out a sub-.500 team by the end of the season, PECOTA felt.
Reply to matrueblood
Muboshgu
The question, to me as a Yankees fan, isn't quite so much how dominant Chapman-Betances-Miller will be, but who of the young guns might stand out to fill out the bullpen. We have Jacob Lindgren, Nick Rumbelow, James Pazos, Tyler Webb, Branden Pinder, Nick Goody, Vicente Campos, and a few other dynamite arms that might stick.
Reply to Muboshgu
matrueblood
None of those arms are dynamite. There are a few usable big-league relievers there, but the top-heaviness of the Yankees' relief corps is as much a story as the quality of it. Absolutely every team in baseball has a Lindgren, a Rumbelow, a Pazos, a Webb, a Pinder, a Goody, a Campos. There is nothing unusual about the Yankees' relief depth.
Reply to matrueblood