With the year winding to a close, Baseball Prospectus is revisiting some of our favorite articles of the year. This was originally published on December 9, 2015.

The 2014 San Diego Padres featured one of baseball's most effective catching tandems, as Yasmani Grandal and Rene Rivera combined to smash 26 home runs and post best-in-league pitch framing numbers. A.J. Preller didn't much care. In his first offseason as general manager, Preller fleshed out years' worth of pent-up trade ideas in a three-day span, and both of his catchers were involved: Grandal went to L.A. as the centerpiece of the Matt Kemp trade, Rivera to Tampa Bay as part of a three-teamer that returned Wil Myers.

Preller's solution to the sudden hole created at catcher was, not surprisingly, another trade; he sent right hander Jesse Hahn to Oakland for Derek Norris, a 26-year-old backstop better known for his promising bat than his glovework.

Early in 2015, Preller's catcher upheaval was working—part of it, anyway. Norris' offense sparked the Padres in April, as he slashed .313/.329/.463 with nine doubles. He even quietly solved the throwing issues that had plagued him the previous season, the same ones that were loudly exploited by the Royals in the Wild Card game. However, Norris' pitch framing was even worse than advertised; through May, according to our numbers at Baseball Prospectus, he cost the Padres nearly 25 strikes and was clearly better than only one catcher in baseball, Carlos Ruiz.

The pitching staff was also struggling, having registered a 4.06 ERA and 68 homers allowed through the season's first two months. James Shields and Ian Kennedy combined to surrender a staggering 20 home runs in May alone, and Craig Kimbrel appeared, for the first time since tee-ball, mortal. It wasn't hard to connect the dots, directing at least some blame for the pitching staff's struggles at the Grandal/Rivera-to-Norris framing downgrade. Andrew Cashner, a major beneficiary of framing prowess a year earlier, griped about Norris to Eno Sarris, even admitting to changing his pitching style because he wasn't getting as many close calls in his favor.

A season-long narrative was writing itself: Preller had ignored the little things—pitch framing, lineup construction, outfield defense, et cetera—to hastily assemble a talented but ultimately flawed roster, and Norris' poor framing was a perfect example of the team's shortcomings.

Then, something happened. The rest of the team kept underperforming, sure, but Norris transformed from poor framer to okay framer to one of the best framers in the league, ending the season ninth in Framing Runs at +12.3 (nearly 31 runs better than Ruiz). Here's one look at Norris' progression: 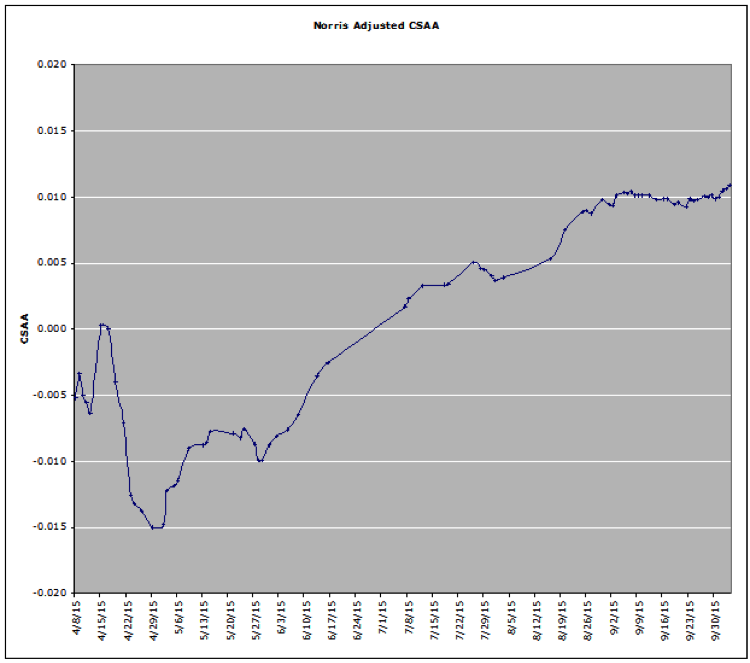 After steadily trending down through April and remaining a framing liability in May, Norris used the rest of the season to pull off his best peak Jose Molina impression. If we were talking about batting average or ERA—or any number of volatile-in-small-sample statistics—a trendline like Norris' wouldn't be surprising, as the vagaries of the game often push and pull players' numbers in various non-meaningful directions. But framing statistics tend to stabilize quickly:

Check out how the worst framers through the end of May performed during the rest of the season:

Notice how all of them—except Norris, of course—continued on as framing liabilities through the rest of 2015. If you squint, you might see a slight improvement from Boston's young catcher Blake Swihart, but for the most part, this group was as bad in September as they were in April. Norris stands out as a beacon of hope for any team hoping their catcher can pull off a similar turnaround, but it's important to realize just how rare a season he had.

The following table shows a different look at Norris' in-season progress, as it shows his numbers on all called pitches grouped into buckets based on their individual strike probability:

In April and May, for instance, Norris got strike calls 63 percent of the time on pitches grouped in the 60-80 percent bucket. From June through the end of the season, Norris improved nearly 17 percentage points in that genre of pitches, nabbing strike calls 80 percent of the time. In fact, he made notable improvements in all five buckets, turning more should-have-been balls into strikes while simultaneously protecting pitches that actually crossed the plate.

While Norris' development in the realm of pitch framing is interesting enough to observe statistically, perhaps there's more to be gleaned from actually watching him. I grabbed six different pitches from last season, with Norris' early season technique on the left and his post-May adjustments on the right.

Notice all of that glove movement in the game from April; Norris dips his glove down before Shields delivers, then he moves it back up to catch the pitch. Further, he doesn't frame the pitch at all, quickly flipping the ball to his throwing hand instead of giving the umpire a good look, a trademark of his early season receiving style. Norris' entire body also sways—slightly, I'll concede—as the pitch heads toward his glove. A study from August's Saber Seminar revealed that good framers tend to move less than poor ones, a conclusion anyone familiar with Ben Lindbergh's This Week in Catcher Framing series had probably already drawn.

The example from June 15th offers three notable improvements: There's no pre-pitch glove movement, there's Jonathan Lucroy-like stillness, and there's a welcome pause after the catch. And—voila—there's a strike on a pitch rarely called one.

Here's a good opportunity to mention that pitch framing is a subtle arm form, and sometimes there's not much more between a strike and ball than the whims of an umpire. Still, note the lack of pre-pitch glove movement in the game from June, and also how both pitches appear similar upon reception despite the fact that they have a 53 percentage point gap between them in strike probability.

Both of these pitches are called strikes a majority of the time, but Norris is set up outside, and in both cases the pitcher severely misses his target while still catching plenty of plate. In the game from May 12th, Norris does little to make the pitch look like a strike to the umpire. He reacts slowly to the inside location and stabs at it, and his glove actually appears to drift further inside after the catch. There's also no pause or attempt to frame the pitch. He gave up on it, essentially.

Norris corrects his form by July 1st, reacting more quickly to the location and sticking his glove on the inside corner, an adjustment he discussed in an article about his framing from September. Even though that pitch is called a strike 82 percent of the time, the missed location likely reduces that percentage by a good chunk, and Norris probably doesn't get that call earlier in the season.

Norris' framing turnaround is still somewhat puzzling. He was around average for his first two years in the majors before his numbers took a big drop in 2014 and continued in that general direction for the first two months of last season. Then he reversed directions and turned into one of the league's best framers. The Padres played a four-game series at the end of May with the Pirates, so maybe Norris had a heart-to-heart with framing connoisseur Francisco Cervelli—that's the best theory I have, anyway.

Whatever happened, it worked, leaving San Diego with one of the game's best young catchers. With 23-year-old defensive specialist Austin Hedges in tow, the Padres again find themselves well positioned at catcher. Let's see what A.J. Preller does this time.

You need to be logged in to comment. Login or Subscribe
Ogremace
Prefer took a lot of flak for allegedly not buying into framing, but i wonder if the Padres just felt that they could teach it? The unwillingness to trade Hedges amidst all the prospects moved might indicate it's not so much that they don't value catcher defense as that they felt they could replace it.
Reply to Ogremace
Ogremace
Preller*
Reply to Ogremace
dutt22
That's definitely a possibility. It will be interesting to see what happens with the current catcher situation of Norris, Hedges, and Christian Bethancourt.
Reply to dutt22