David Price long ago became the consensus focal point of the free-agent market, and that was probably okay. He’s a similar talent to Zack Greinke, but he’s younger, he’s left-handed (a dubious advantage, but a perceived one, nonetheless), and he’s never publicly overcome difficult anxiety issues, so no one has been able to unfairly concoct a narrative whereby he’s unstable, unreliable, and unlikely to maintain his success. Price got more guaranteed money than Greinke, without any of that money deferred, and he got an opt-out—a valuable perk which Greinke, according to a report from Jerry Crasnick, didn’t receive. That’s fine; it might even be correct.

To be clear, though, Greinke was better than Price in 2015. In fact, only Clayton Kershaw was measurably better. And in fact, as far back as DRA (and DRA-) goes, some 60 years and change, Greinke’s 51 DRA- was the 11th-best by a qualifying starter. He’s never (or rarely, anyway) been a FIP monster, and his 85 cFIP doesn’t reflect his dominance, but there’s an argument that Greinke had the best platform season in the history of free-agent pitchers. If that’s true, maybe we shouldn’t be surprised that he got a richer deal in AAV than did Price. (Ken Rosenthal reports that over $60 million will be deferred, so don’t give the $34.4-million average suggested by the overall teams full weight, but the value of the deal will still be roughly $32 million per year, in 2015 dollars.)

So this is the market now. If the rumored gap between the Red Sox’s offer to Price and that of the runner-up Cardinals had anyone questioning Boston’s choice, this deal should put those questions to rest. The Sox didn’t overpay for their new ace, and the Diamondbacks didn’t overpay for theirs. Consider this, too: the Diamondbacks nabbed Greinke out from under the Giants and the Dodgers. Two days ago, it seemed a foregone conclusion that one of the two perennial powers of the division Arizona is hoping to take by storm next season would land a perennial Cy Young contender. Instead, Greinke becomes to Arizona what Jon Lester was to the Cubs last winter, the big fish that announces the arrival (in full) of a viable upstart. What’s the cash value of grabbing a player this good, when the alternative was so obviously that he would provide all that value to one’s division rivals? I’m not sure, but I’d bet the Diamondbacks figured it into their offer, and I suspect they were right to do so.

Let’s talk about just what the Diamondbacks are getting here. Greinke is a marvel, both physically and mentally. He’s missed significant time due to injury only twice in his career: once after cracking a rib playing basketball during the offseason, and once after Carlos Quentin broke his clavicle during a brawl. His prowess with the glove and at the plate are amazing, and probably the most underrated element of his value. We credited him with 1.3 non-pitching WARP for 2015, thanks to 5.4 Fielding Runs Above Average and a .219 TAv. He was the 15th-best stopper of successful steals in baseball in 2015 (-1.6 percent SRAA). I would caution strongly against assuming that a pitcher will hold onto much of that kind of value (especially batting value) into his mid-30s, and hope the Diamondbacks didn’t pay much for those skills themselves, but Greinke’s general athleticism is a major plus.

Then there’s everything the slightly obsessive, thoughtful Greinke has learned about the game, and the way he’s used it to evolve and improve as a pitcher, even while his raw stuff has declined. His fastball velocity has fallen over time, as everyone’s does, but he’s found a way to throw his changeup and slider steadily harder as that has happened: 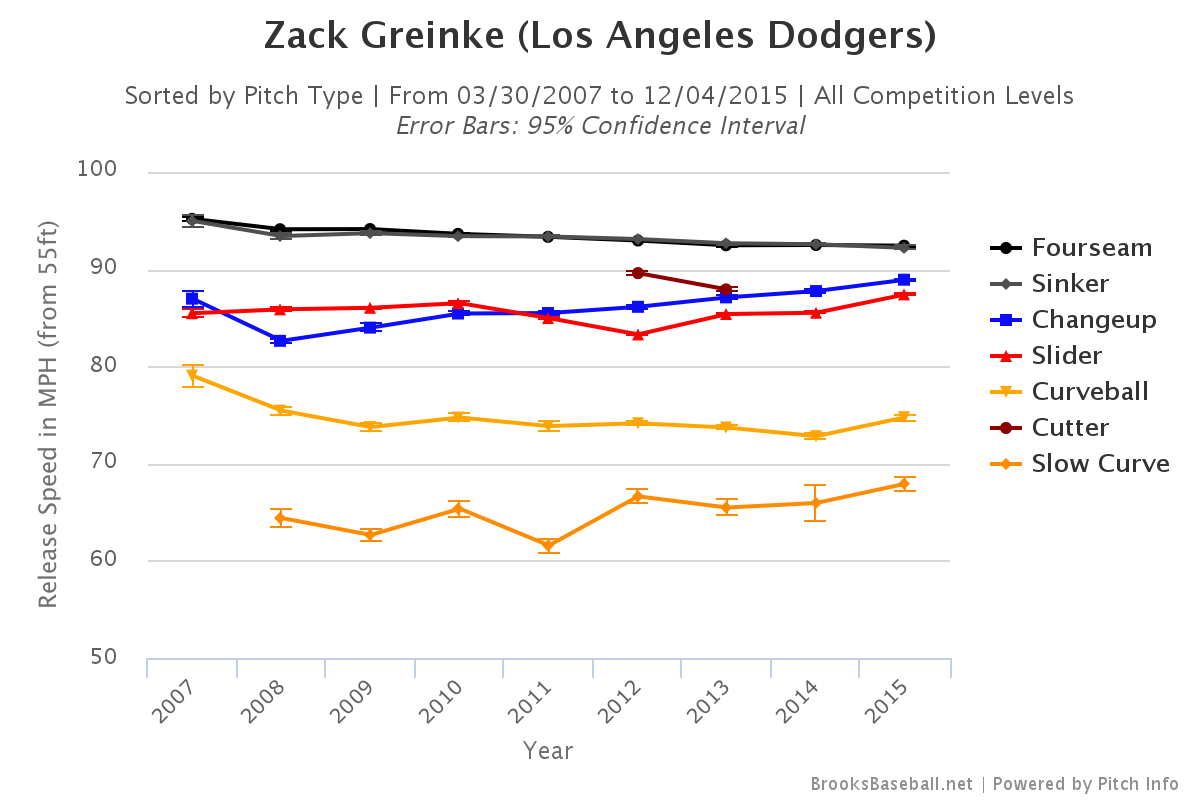 How has he done so? There’s more to it than this, of course, but the long and short of is that he’s made small mechanical changes that maximize efficiency and power, instead of deception and electricity. For instance, he’s steadily raised his release point, reaching a peak in 2015: 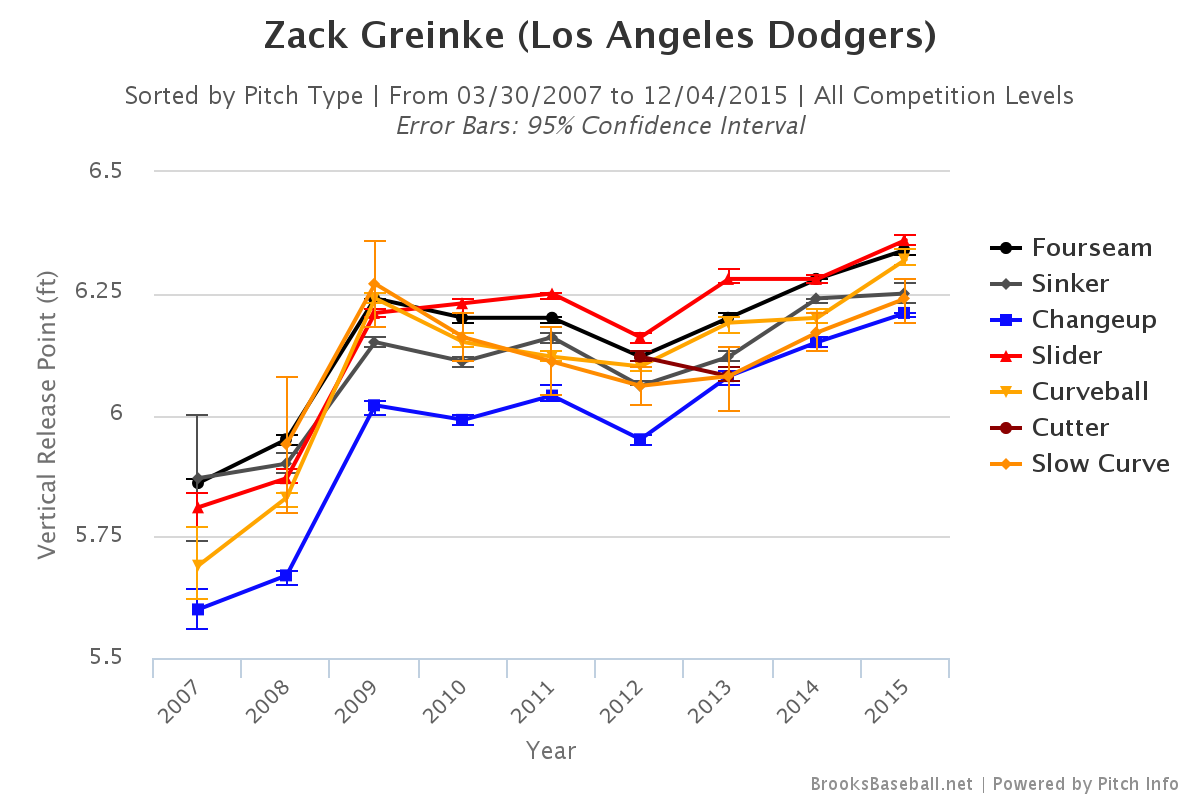 Recognizing that the six- or seven-pitch arsenal, while dazzling, is tougher to execute without the mid-90s heat to keep hitters honest, Greinke has also made the choice to simplify his array, throwing mostly four-seamers, changeups and sliders: 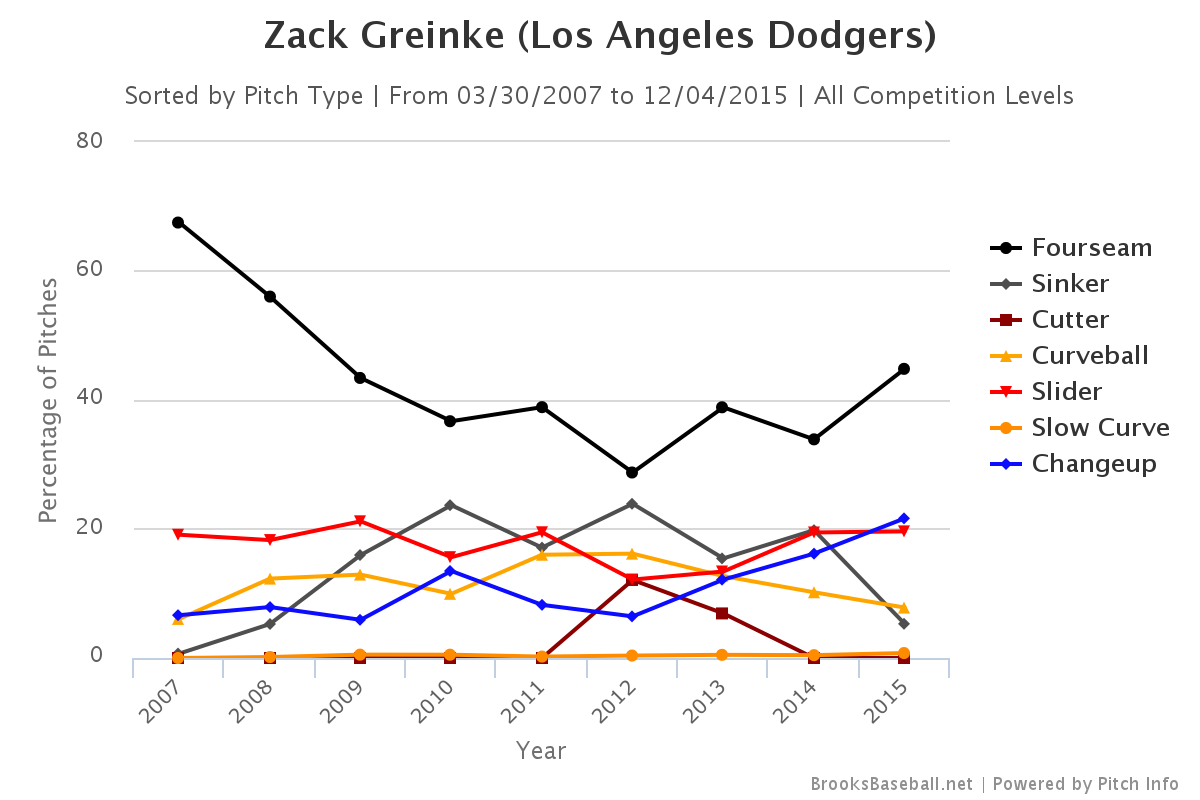 If it weren’t for the depression with which Greinke struggled in his early and mid-20s (the ages when the incidence and occurrence of that condition peak in men, by the way), we would talk about him as a modern Maddux. He’s fiercely competitive (though not in the fraternal, militaristic way some media members still consider to be the only way), funny (but occasionally standoffish), an athletic marvel (though without the dimensions or, frankly, the skin color most commentators associate with that status), and brilliant—so brilliant that he seems to improve even as his physical skills deteriorate.

That’s a trap, of course. Any comparison to Maddux is a trap. You say a guy is a modern Maddux, and then it becomes his fault if he doesn’t have the very long, very good, very gradual decline phase Maddux has. You say Greinke has shown an ability to adjust on par with Maddux’s, and suddenly every good thing he does is proof of that, and every bad start is just the start before he makes a miraculous adjustment. It’s perfectly possible that Greinke will have a rough, fairly sharp decline, and that it will turn out that he has no idea how to make the next set of necessary adjustments. For now, though, he deserves the benefit of any doubt.

The money! Let’s talk about this money. Where did the Diamondbacks get this money? That’s mostly a rhetorical question, of course, because most of you already know: the Diamondbacks got their TV deal done this February. By now, the narrative—Team X signs rich-as-Hell new TV deal, goes from fringe of mid-market status to nouveau-riche killers in no time, flat—feels tired. I hate talking about new TV deals, because here’s the thing: the only advantages here are based on timing. Teams whose old, wildly outdated regional TV deals have yet to expire are frozen out of the new money, but with a few exceptions, that’s not really their fault. We have to talk about it, because it’s impossible to explain how the Diamondbacks just outspent the Dodgers and Giants (though either of those teams could have elected to outbid Arizona, of course) for Greinke without mentioning this new source of some $75 million a year, but am I supposed to pat. Dave Stewart or Tony La Russa (or even Derrick Hall, or Bud Selig, or Rob Manfred) on the back for that? These deals are almost automatic, and have almost nothing to do with merits specific to a given team. They just happen, the way so many stunningly good things happen to billionaires. Sometime in February, the 18th-best pitcher on this free-agent market is going to get $40 million because some team will have nothing better to spend their money on and will be too close to contention to justify not spending it. Similarly, teams are getting huge paydays dumped on them because cable companies have nothing better to spend their money on. In other words, the Diamondbacks could afford to sign Zack Greinke because more people can agree to watch a Diamondbacks game than can agree to watch (together, in real time, so ads can find multiple sets of eyes and not be fast-forwarded through) one of “House Hunters International” and “Naked and Afraid,” or whatever the Hell else might be on.

Where does all this leave us? For one thing, it leaves a lot of people (like me) who were looking forward to touting Arizona as a sleeper next spring looking for some other sexy name. It also puts the Diamondbacks right in the middle of the NL West picture—provisionally. A couple of things about Greinke’s monster 2015 stand out, things that might be hard to repeat in Arizona:

I compared this signing to the Cubs adding Lester, and of course, it might be an even more impactful addition than that one was. On the other hand, the Cubs also added Miguel Montero, David Ross, Jason Hammel, and Dexter Fowler last winter. They had multiple weaknesses, and proactively addressed them all. The Diamondbacks still have to do that, because they have exactly zero offensively competent big-league middle infielders, could still use another starting pitcher, and lack quality depth everywhere but the outfield.

The nice thing about the aforementioned TV money is that there’s little chance signing Greinke prevents them from making those other upgrades. Rosenthal reports that they’re (still) interested in Mike Leake, which is consistent with the addition of Greinke—Leake, too, is a great athlete with a consistent (if uninspiring) track record. They made some poor (and downright galling) moves that dented their farm-system depth in 2015, but they still have enough from which to trade to pull off a duplication of the Cubs’ big improvement. —Matthew Trueblood

As Matt discusses above, the DRA runs leaderboard is a fantastic resource to break down external factors that affect a pitcher's performance, and I don't need to regurgitate those same reasons down here. There was already a strong sense in the fantasy community that Greinke was not quite going to be the 5×5 pitcher he showed in 2015 going forward. He was part of the trifecta of pitchers who earned at least $38 this season in mixed leagues (sliding in just behind Clayton Kershaw and Jake Arrieta. Staying in the National League will certainly help Greinke's cause going forward, and the park—though a step back from Dodger Stadium—won't have too much of an effect on him given his historical ability to keep the ball on the ground and get pop ups at an above-average clip.

The question then becomes where do we value him both in redraft and long-term leagues. He was a pretty easy call for the top-5 this coming season had he stayed with the Dodgers, but that's no longer the case with Arizona. He's still a solid SP1, whose ratios will likely take the biggest hit in this move, but I'd take him behind the likes of Chris Sale, Jacob deGrom and David Price now. Jose Fernandez would probably fall into that camp if not for his seemingly inevitable innings limit. In dynasty leagues, Greinke falls out of the top-10 completely—as despite the near Cy Young season, he's been passed by the likes of Cole Hamels, Matt Harvey, Gerrit Cole and Jake Arrieta. There remains much less risk comparatively with Greinke, but the upside we saw in 2015 was unlikely to return even with the Dodgers—and is now firmly disappearing from the picture in the desert. —Bret Sayre

You need to be logged in to comment. Login or Subscribe
jarretthaines
Arrieta was better in 2015
Reply to jarretthaines
matrueblood
Not according to DRA, he wasn't. (I know that response seems overly simplistic. It is. I'm just saying, we absolutely can't say that for sure.)
Reply to matrueblood
morro089
I believe there is a pretty consistent theme where you (Matt) state opinions as fact. And this statement isn't a fact because there was no prerequisite saying "in terms of DRA" or whatever.
Writers and subscribers of this site like to think of themselves as open-minded individuals, but I think we get so caught up in finding new data and "proving" what's wrong/right that we get ignorant to other peoples' opinions or assume the assumptions are correct. I think we've all learned some of our previous assumptions were wrong (catcher's "soft hands" are actually really important, smart people will pay for saves) but seeing the "I know I'm right" attitude continue ignores lessons learned. I'm not sure if you're caught up...or just like the number of comments on your articles.
Reply to morro089